Can Noble Red's strong familial bond overcome the horrors of their shocking debut? 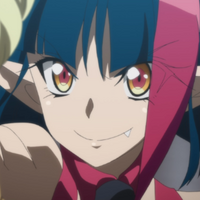 Spoiler Warning: This feature discusses events up to and including Symphogear XV episode 9!

Whether it's through watching a hero struggle against a fearsome foil or letting ourselves be taken in by their dubious charms, there's no denying that we all love a good villain. Some of them are among my favorite characters in fiction, and from the sweet, ditzy Kirika to the megalomaniac Adam Weishaupt, Symphogear is no stranger to the many forms they can take. The series is also great at letting us know which deserve our affections - handy when some can even become heroes of tomorrow!

But I've been left pleasantly conflicted by Symphogear XV however: I know their actions are terrible, but why can't I stop finding Noble Red so darn charming?! 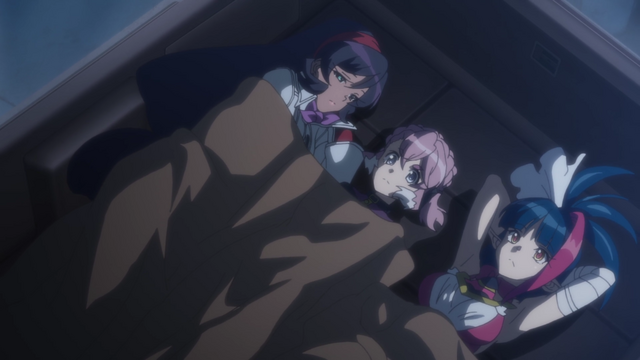 The trio of horror-inspired girls made a shocking first impression when the vampiric Millaarc killed thousands at Tsubasa's comeback concert, but what's come to define Noble Red more for me was the excuse she gave for ripping out that poor hostage's heart: that she's weak. In a series of constantly escalating power levels, "weakness" wasn't exactly a quality I was expecting of those going against a "god killer," yet ironically, I'd argue that it has become their greatest strength.

For people so concerned with restoring their humanity, I'd say Noble Red are already more human than most. Despite appearing in a monstrous fashion to Tsubasa, it wasn't long after that that we saw a weakened Millaarc screaming about the need to protect her family while fighting the wielders preventing her from stealing the blood they needed. The bond shared by Millaarc, Vanessa and Elza feels more genuine than typical villain team-ups, with moments like them snuggling together in the back of a car, or cuddling together for protection, making them seem like a true family. Even their subtle reactions in bigger moments exude a more lifelike charm than typical villains are allowed! 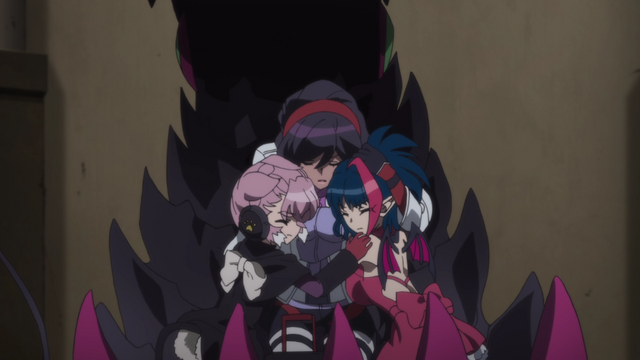 Is it any wonder they're this close though, given the trauma they share? If telling us their past this early on was an attempt to make me sympathetic towards Noble Red, well... it worked like a charm and I just can't hate them, because they're victims too. First they were experimented on by the Bavarian Illuminati, and now it's clear that their would-be savior Fudou Kazanari doesn't care for their well-being either, and sees them as disposable pawns. Given the way the world has treated them, I'm surprised that restoring their bodies is the only thing they want to do with a god's power - I can't deny that even I'd be tempted by a little bit of divine retribution! Seeing them be mistreated by so many people makes me hope that one day they can just sit back, relax and have their happy ending... but they're the bad guys, right?

One thing I've learned from years of loving Symphogear, is that not everyone stays a villain. In fact, two-thirds of the wielders started that way! Noble Red's situation brings back memories of Chris's, with both being victims taken under the wing of misleading, uncaring antagonists. Chris eventually fled Finé to join Hibiki and Tsubasa, becoming the cinnamon roll we adore today. Responding to the callousness shown to them by Fudou, Vanessa took the first step by trying to take the divine power for Noble Red, but what could happen to them next?

When Hibiki stopped her Amalgam fist just short of Vanessa's face and extended her hand, Noble Red's de facto leader looked genuinely surprised, but wasn't as dismissive like Chris initially was. Might she have considered the olive branch had the wielders not been ordered to withdraw? Vanessa has a one-track mind when it comes to her goal however, even showing a willingness to put civilians in danger for it. So it would likely take something big for her to take decisive action, like grief. 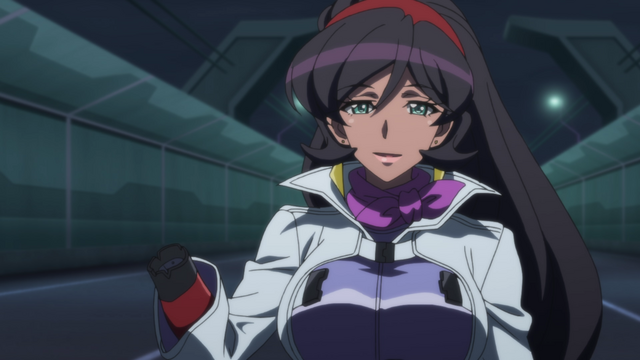 The quick scene change after Shem-ha awoke and attacked them has ensured I'll be nervously anticipating next week's episode, but I hope that wasn't the final and unceremonial curtain for Elza and Millaarc. However, if they have died while Vanessa's mechanical body allowed her to live, it may be hard to predict how she'll react to losing her family. Her growing to hate the god who tore them away from her could be what it takes to push Vanessa into joining forces with the "god killer," but Miku's involvement could prove a deal-breaker.

Perhaps a clue to Vanessa's fate lies with another villain of seasons past: Symphogear AXZ's Saint Germain. As the de facto leader of a trio misled by a villain wanting to harness a god's power, I see a bit of the almighty alchemist in Vanessa. Having lost Cagliostro and Prelati before Adam's true ambitions were revealed, Saint Germain put aside her differences with Hibiki to stand together against the Bavarian Illuminati leader. Saint Germain grew to respect the punchy protagonist's desire to face impossible odds "even if that's true," and she ultimately sacrificed herself to save the wielders. Should she obtain the powers of Shem-ha, perhaps Vanessa could find redemption in sacrificing the dream of restoring her body (and perhaps herself), to bring back Miku?

Even if she did survive however, redemption may prove impossible for Millaarc, no matter how much I adore her devilish charm and stylish flair. Given the scale of Millaarc's actions and the impact they've had on her, Tsubasa deserves to see justice delivered. My favorite aspect of Noble Red's story however, is how morally conflicting they are. While the extremes of their actions make sympathy near impossible, I can't help but understand them. 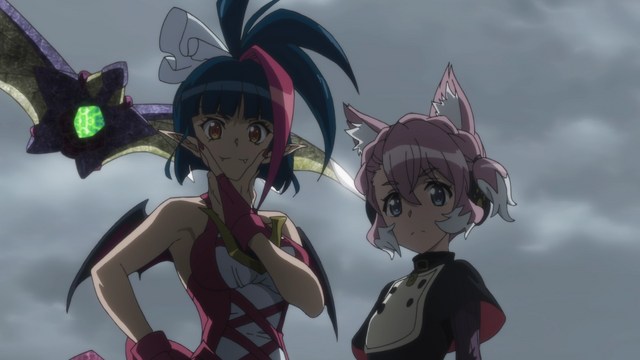 Millaarc has shown that she'll do anything for her family, which is something most can relate to. She certainly takes the whole debate about stealing bread for a starving family to new, indefensible degrees though, making her one of this season's more interesting foes in my (stained-glassed) eyes! That same determination to do anything for her sisters however, may have seen her go down fighting for them.

At the very least though, my heart will be pained if anything but a happy ending awaits Elza. Perhaps I'm biased as a lover of them, but everyone knows all dogs are good dogs. Noble Red's youngest member is like an adorable puppy, quivering with excitement at receiving praise, and even sniffing out a tracking device like a pet navigating our blankets. While Elza can bear her fangs and is loyal to her family above all else, she also has a kinder head on her shoulders, even chastising Millaarc for her treatment of Elfnein! If any member of Noble Red deserves to make it through the end, it's her. If she survives Shem-ha's attack, maybe she could find a new family and give Elfnein some company in S.O.N.G's control room?

What do you hope happens to Noble Red, and who’s your favorite Symphogear villain? Let us know in the comments! New episodes of Symphogear XV are available weekly, as part of Crunchyroll’s Summer 2019 season!