The creators of Dr. STONE, Riichiro Inagaki and Boichi, speak with Crunchyroll for an exclusive interview about the smash-hit science manga! 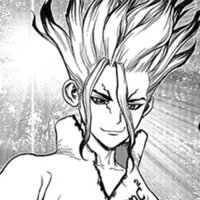 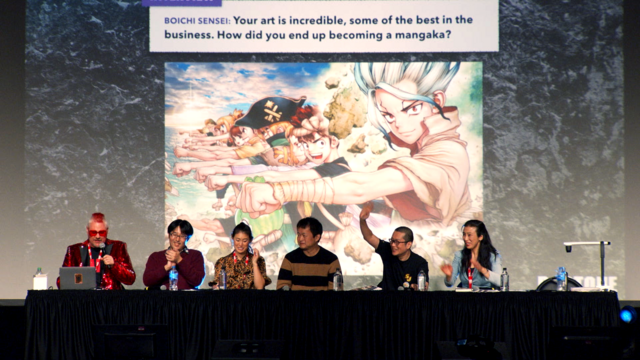 At Anime NYC, Dr. STONE creators Riichiro Inagaki and Boichi met with thousands of fans to talk about their hit Shonen Jump manga series. In a story that spans 3,700 years, the tag-team duo follow the adventures of Senku and the Kingdom of Science, as they try to revive humanity and bring back technology from the modern era, from glass, hydropower, and even smartphones. We had the pleasure of sitting down with both Inagaki and Boichi to talk about their careers together, how to actually illustrate dyanmic technological advances, and even who's better at crushing grapes with their feet.

For Inagaki, What is it like to see fans all over the world falling in love with Dr. STONE?

Inagaki: I think there are sometimes cultural differences about what people find interesting, but if you have simple themes, they are pretty universal. For example, good guys versus bad guys. I think people around the world find that interesting, but the more niche the themes get, the more cultural differences there are as far as what people find interesting. For me, Dr. STONE is entertaining, but I do think that the theme of Dr. STONE is niche. If you asked me a couple years ago what I would think if I knew that people all over the world would like Dr. STONE, I wouldn’t know what to say. But look where we’re at now. I’m grateful for all the fans around the world.

For Boichi, You seem to have a strong passion for backgrounds! Do you ever dream about the backgrounds you’ve created in Dr. STONE?

Boichi: When I first started Dr. STONE, I thought about the different backgrounds I could make. Thinking about 3700 years passing without humans, and what could have happened to the nature of Japan. I wanted to do justice to the nature of Japan after 3700 years without humans. I imagined that if I could create backgrounds like Princess Mononoke, that would be wonderful. My favorite background is the castle of Tsukasa and it has a secret there. In my studio, we call it “Roppongi Hills.”

Do you think the nature of Japan is more beautiful in the future of Dr. STONE or today?

Boichi: My basic belief is the more nature is untouched, the more beautiful it is. The less that is touched by human beings, the more beautiful nature is. However, in modern society, if we don’t manage or control nature, it can be really dangerous. I think if we can manage nature in a proper way, that would be best. In Dr. STONE, the trees I draw are huge. Of course, there are no guarantees the trees will grow big, but without the influence of humans, I think that nature would grow to be magnificent and beautiful. That’s what I wanted to show. That’s why I drew the trees so big. 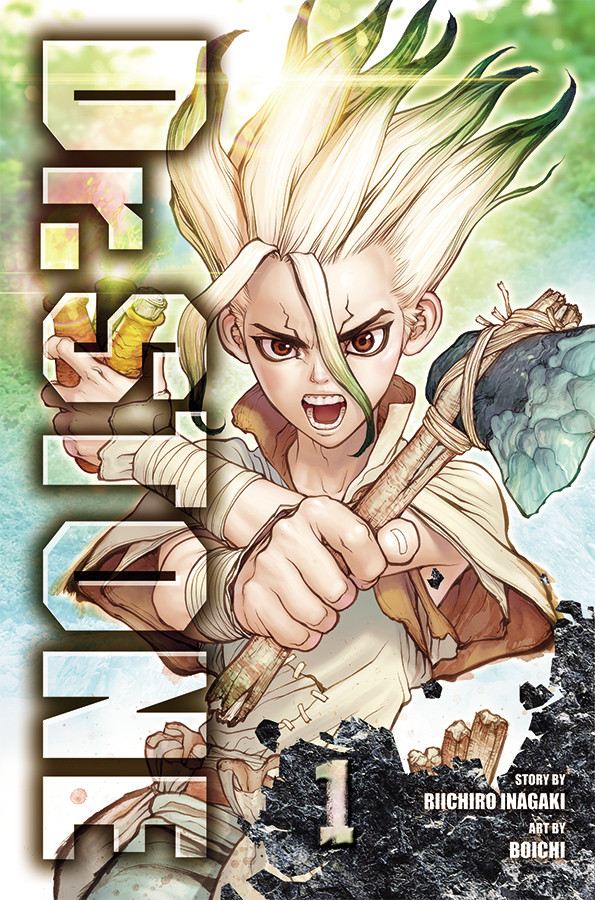 CR: For both, what is the most memorable experience do you have working in manga?

Boichi: I have so many memories, but I think of Blade Runner. The last line that Roy says is “I’ve seen things you people wouldn’t believe.” I actually have experienced this. For example, I have experienced great manga artists instantly disappearing. I have also experienced extremely talented manga artists loving my work. Of course, the most memorable moment is when Shonen Jump said I could work with Inagaki-sensei.

What about Dr. STONE do you think surprised fans the most?

Inagaki: This kind of goes back to the planning stages, but I don’t think fans were that surprised by the big petrification. I think most fans expected that the petrification would happen and there would be some hero or someone coming from space and saves everyone moments or weeks later. But you keep reading and there was no savior, and thousands of years pass! I think that was surprising to fans.

Boichi: So in Stephen Hawking’s book “The History of Time,” he mentions that “if there’s one number that shows up, the sales drop by half.” So if you even mention numbers, the sales drop. But Inagaki-sensei’s story is full of numbers and the fans love it! He writes such a great story and still sells with all those numbers in it. 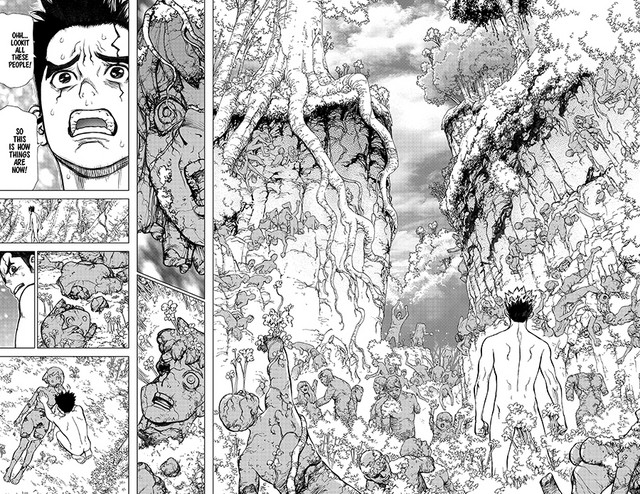 We know the anime production team made glassware and practiced some of the science from your story to accurately translate it into anime form⁠—did the two of you do anything similar to get inspiration?

Inagaki: We have done a lot of research, like going to a glass blowing factory. When it comes to hard science, we have a science consultant who helps. But the research is important because experience can’t be taught. So by getting that first hand experience ourselves then we can reflect it into the characters.

Who’s better at crushing grapes with your feet then?

Inagaki: I’ve done it before. It was like an experience thing at a winery. I stepped and stepped, but only made a little bit of grape juice. Then someone came from the back and gave me a bottle of wine, saying that it was from the grapes I crushed. But that was obviously a lie [laughs].

Boichi: I often think Dr. STONE is a reward that life gave me. I worked a lot and really did a lot of studying as a manga artist, but when I started Dr. STONE I was also working on Origin, so I was working on two weekly manga at the same time. There’s no other time to do anything other than drawing manga, so I didn’t have any time to do any research specifically. But when I realized there was going to be a gun in Dr. STONE, I had already read a lot of books on [guns]. When I had to draw some cooking, I already had read a lot of books about cuisine. And when I had to draw Kamakura and Hakone, I had already been there and took a lot of photos. I had a database already with 900,000 photos. I ended up using all of that. From that, I learned that research was important for subjects I did not know. So, I did have to go and do research about Soyuz. I’ve read a lot about America’s space development, but I didn’t know much about the Russians. I went to Russia and ended up meeting the only Korean astronaut who went to space. She became my consultant for Byakuya in the Dr. STONE reboot.

Wow, do other people know that? 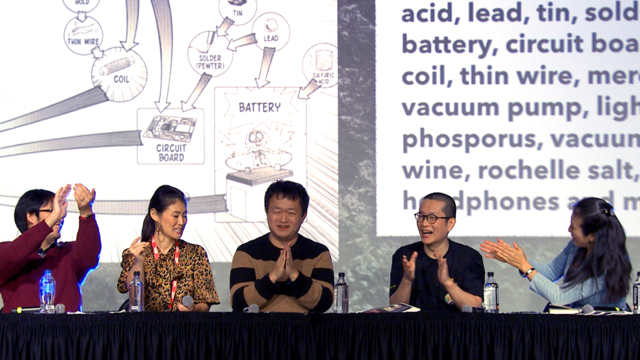 The two of you seem to have a wonderful relationship. How do you work together?

Inagaki: First and foremost I have themes that I want to show in Dr. STONE. In manga, it’s easy to show superheroes but you don’t see ordinary people doing things persistently. In real life, that’s what we humans do and that’s a virtue of humans. That’s what I wanted to write. That’s a jumping off point for my answer to your question.

My question when we were going to team up was “How is Boichi going to express my storyboards through his drawings?” I was already familiar with his work and was a fan. So I gave him the storyboards, he would begin working, and then we would go back and forth. The more we go back and forth, the more I understand him as an artist and his perspective and what he’s capable of doing. So going back to the previous thing I said: how do you make that act of people working persistently look cool? Other manga have battles that go on for pages and pages, a lot of action, but to show the theme I wanted to illustrate, I think, it is important to show it in one complete illustration as one frame, which is a difficult thing to do. Even when we first started working, I was a little hesitant and conservative with my storyboards.

Specifically, with the water wheel, you’re just cutting wood down and putting it back together. But how do you make that look cool? I’m sure there are a few ways to express that, like having the characters cut the wood at hyper speed, but that’s not quite what I was looking for. So that’s why I said I wanted to express that with Senku saying “Hydroelectric power plant acquired!!” with an illustration of a hydroelectric power plant in a cool pose as a full-page spread. That’s the important part.

And Boichi sent back a really awesome frame. Once it got published, the fan feedback was great. When I saw this, I decided that I would leave this type of scene to Boichi’s full page spreads, and from there we started using more of these types of frames.That was also building us together as a team. Over the back and forth, we both understood what our strengths are and continually play off of those.

Boichi: Working with Inagaki-sensei is the best thing in the world. Imagine, if you are driving a car with someone, it’s like having the world’s best Formula 1 driver in the driver’s seat.

Boichi: When I collaborate with Inagaki-sensei, the most important thing is how I can express his world and story. For example, when I was drawing the water wheel, the important thing was thinking how Senku and the characters were going to build this, what was going through their minds, and what direction the water wheel would take the story. I want to do justice to his story. For example, there are a lot of rocks piled up on the other side of the water wheel so you can make the stream faster. I also think that as the story develops, I wanted to make that water wheel more powerful and functioning. That’s what I think about when I draw.

In anticipation for the season finale of Dr. STONE, we are publishing exclusive pieces all about our favorite exhilarating science show! Tune in this week for interviews, deep-dives, quizzes, and more!

CLICK HERE TO WATCH BEHIND THE SCENES OF DR. STONE ON CRUNCHYROLL!