Nothing But Respect For Our New Anime Queen, Eizouken's Sayaka Kanamori 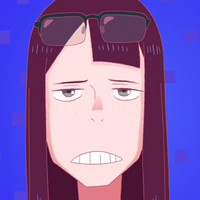 What exactly makes a great anime character? Is it the way they look? The way they sound? Their impact on the series? And what about their impact on anime in general; are they doing anything that no other character has really done before? It can be tough to separate personal favorites or even series stars from the truly memorable and amazing characters out there, and even more difficult to find a unique character that breaks out of the pack without crazy superpowers or abilities.

While Keep Your Hands Off Eizouken! has wowed viewers with amazing visuals and a loving discussion of how to make anime, it’s also brought us the gift of the greatest new anime character in quite some time: Sayaka Kanamori. This tall queen of the Eizouken club isn’t obsessed with anime like her cohorts; Sayaka fulfills the role of producer and manager, keeping her partners in check with cool headed logic and a mind for the reality of a creative project, not just the dreams of one. Aside from her amazing design, visual impression, taste in food, and killer voice, Sayaka also possesses a power sorely lacking in many anime, realistic or not: the ability to say "no." 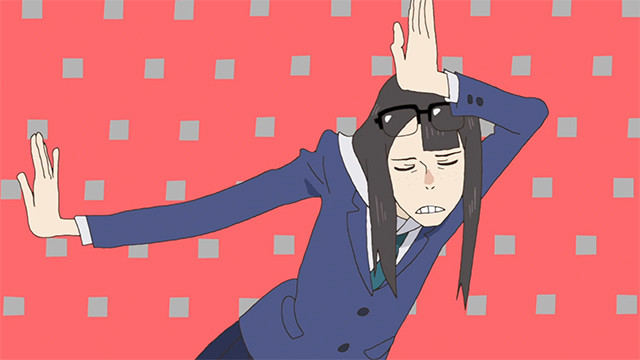 So far, Keep Your Hands Off Eizouken! has focused on the character’s attempts to create their own anime, tapping into the creative passions of both Midori Asakusa and Tsubame Mizusaki. Both of them frequently get lost in their imaginations, thinking of wild and inventive ideas of things they’d love to see, spotting anime in every small detail or unique aspect of daily life.

Sayaka, on the other hand, is the only non-anime fan of the group, making her initially seem like the odd duck out of the trio. Instead, she’s really the rock that grounds the entire group, keeping things realistic and functional as the other two get lost in their own fantasy worlds. Sayaka’s haughty disposition may make her initially seem like she’s not interested in the fun of the other two, but in fact she works hard to ensure that they can indeed have their fun, being the person who acts off screen to talk to faculty, arrange materials, and keep the schedule running. Without a serious mind like hers, there’s no way the Eizouken crew would get anything done.

And instead of being a wet blanket, Sayaka does enjoy working with her friends (even if it seems like her focus is just on earning money). She often appears in the fantasy worlds as an interested observer, joining in when needed, and she has her own flare for the dramatic, whether it be impassioned speeches or simply cramming her tall frame into an entire door to make an entrance.

Sayaka’s frankly deadpan attitude plays off of the childlike nature of Mizusaki and the chaotic energy of Asakusa in a way that feels totally natural and likable; as much as she might protest that she’s only interested in things for the money, she seems absolutely committed to letting her friends have their dreams come true, even if she has to be the one to rein in those dreams to realistic levels occasionally.

This aspect of her character is what makes Sayaka so unique: the ability to firmly say no to other people. Many anime have characters that are reluctant to go along with things, or constantly complaining about the antics of the people around them (whether in a comedy, action, or other sort of show), but Sayaka isn’t just throwing water on the fire of fun. Her role is far more important: as a producer, she is the person who needs to ensure that the anime the other two want to make can actually get made.

Even in the real world,  being the friend that has to be the voice of reason and say “no” to other people’s fantastical ideas is never an easy or desirable position; it can be easy to see it as simply raining on other people’s parades. Usually the more sour or serious characters are forced to give in to the more energetic and positive characters' whims, but Keep Your Hands Off Eizouken! seems intent on portraying things with a heavy dose of reality, that you can’t always get what you want and that you need to find a compromise and sacrifice, something that Sayaka understands fully, and ensures that the rest of the group does too. 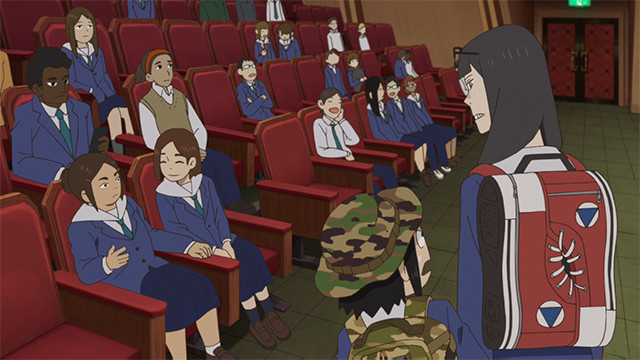 Of course, it isn’t just her attitude and personality that make Sayaka stand out; her aesthetic choices are also a huge part of her unique appeal, from her backpack to her impossibly tall stature; I know that if I had the choice, I’d absolutely carry around a backpack constructed out of two classic Chucks! (I wonder if Cospa or some other company will be making a backpack just like that one; I'd buy it in a heartbeat!)

Her unique voice (performed by the amazing Mutsumi Tanamura!) is a second big charm point, playing to her imposing and devious nature; the emotion carried by her somewhat deep and flat tone of voice gives surprising depth to the character in a way that reminds me of a similarly important anime character: Haruhara Haruko from FLCL. Like Haruko, Kanamori’s entire visual and audio package creates a character far more memorable than it might first appear, one that feels fully realized and instantly relatable; even if you aren’t a Kanamori, you probably know someone who is.

And really, that’s what makes Kanamori so special as a character: she feels like a person, even in the short span of time we’ve become acquainted with her. Even more than the other Eizouken girls, Kanamori feels the most relatable and realistic of the trio, a person dedicated to their goals and with a no-nonsense attitude to getting those things done. Her role as producer in her group means that the success and failure of projects truly rests on her shoulders, because no matter the skill or talent of the other two, her management will be the thing that ensures the anime even functions.

And her dedication to the hard work required to make that happen makes her even more admirable; following a fruitless meeting with the art club, Kanamori simply throws herself into the work of punching holes in animation sheets, and then spends the rest of her day preparing for an all-nighter to ensure the computer animation processes complete successfully. We could all truly use a friend like Kanamori, and if you have a Kanamori in your life, make sure you tell them “thank you!” They may not show it, but they’ll certainly appreciate it a lot. 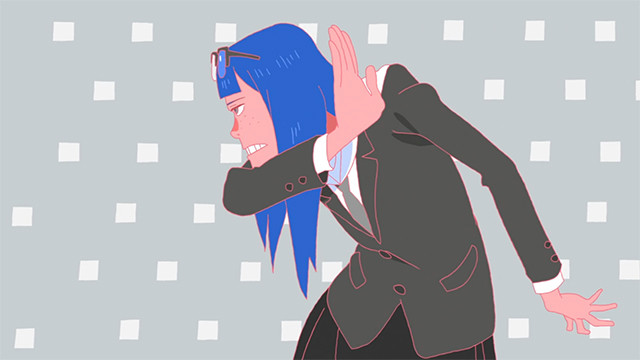 Overall, it’s hard to say the last time a character left such an impression as Sayaka Kanamori did. She isn’t a one-off joke character, she isn’t famous for a specific scene, but instead she’s simply an incredibly strong and realized character that is not just integral to the success of the show she’s from, but helps sell the idea that anime can really deliver truly memorable characters. Without Kanamori as she is, it’s probably true to say that Keep Your Hands Off Eizouken! wouldn’t be nearly as interesting to watch; it would be simple to envision her as simply the audience stand-in who doesn’t understand anime for the other characters to explain things to, but instead we’ve been gifted with an amazing character that stands head and shoulders above most other characters in anime these days.

Eizouken would be a worse show without her, but anime in general would also be quite at a loss without such strong, unique characterization. Long after Eizouken finishes airing, we’re pretty sure that the show, and Sayaka Kanamori, will stick with people as one of their favorites. Sayaka Kanamori, we’d let you produce our anime any day!

Are you a Kanamori fan? Sing your praises to our new anime queen in the comments!