FEATURE: The Big Dad Energy of Naruto & Sasuke vs Momoshiki

The Hidden Leaf Dads are not to be messed with 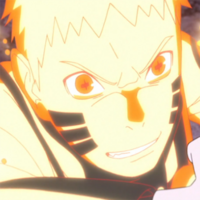 One of my favorite things about Boruto is that it's pretty firmly about Boruto. I know that sounds silly, considering that the name of the series IS Boruto, but it would be super easy to just use it as a veiled train of unstoppable nostalgia. Don't know where to take the plot? Unsure about the potential of your lead character? Just wheel out Naruto! People love Naruto! Instead, Boruto uses Naruto as a way to frame Boruto's growth. The seventh Hokage shows up fairly often, but his main role in the show is to give Boruto something to possibly aspire to, something to compare himself to, something to struggle with and also respect and love.

That said, when Naruto does get a piece of the action, it is pretty awesome.

The Momoshiki arc of Boruto, like many things in the franchise, deals with legacy and the threat of the past coming back to haunt us. In this case, Momoshiki Otsutsuki has come sniffing around to be like "Hey, where's Kaguya? Y'all seen her?" If you don't remember, Kaguya ended up kinda being one of the final bosses of Shippuden, being defeated just before the game hints that you won't get to save again once you fast travel to the Valley of the End to fight Sasuke. And she got walloped by the combined efforts of Naruto, Sasuke, and Sakura, leaving Momoshiki to form his own nefarious plans. 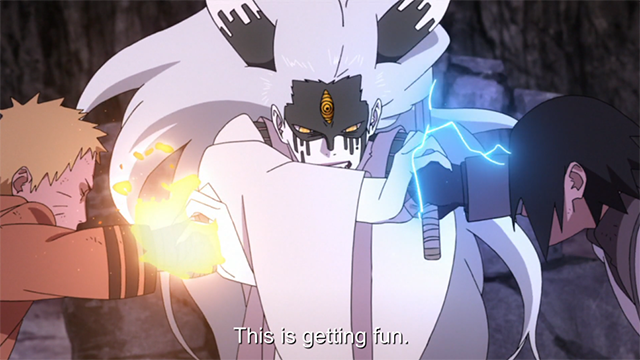 And let's get one thing clear: Momoshiki is awful. He's about the least cool dude imaginable. He doesn't really like to train. He gets easily frustrated when he senses that his status is about to be threatened. He looks down on everyone around him. He's so easy to hate. Compare him to some prior villains in the series: Obito had the tragic backstory going on. Kakuza was this Frankenstein monster bro. Orochimaru had pure goth style. Even sad old Danzo seemed pretty intelligent. But Momoshiki has none of those qualities. Thus, he's a great villain because there's no one in Boruto that you want to see get punched in the face more. 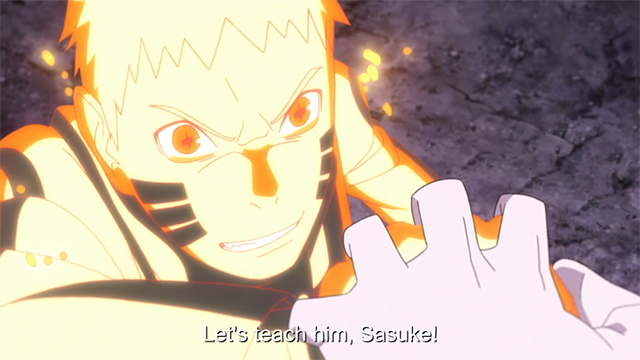 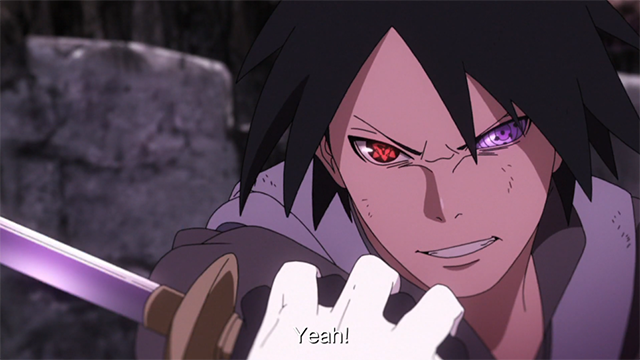 Luckily, Naruto and Sasuke are around to do that over and over. At this point, Naruto and Sasuke radiate pure Dad energy. Just socks and sandals, my favorite actor is Clint Eastwood, you can't touch the grill at the cookout Dad energy. And when Boruto yells out to him and Naruto and Sasuke leap into two-versus-one action against Momoshiki, it's so great that you almost feel like you're seeing it through the eyes of Boruto himself. When I was a kid, I thought my Dad was the strongest and smartest guy in the world. He could do stuff like fix things and lift things and take care of things. It was AMAZING.

And now not only is Boruto getting to bask in the glow of his Rad Dad, but he's watching him team up with Sasuke, who's basically his cool uncle. For years, Sasuke could not stop messing up. That dude had one time on his watch and that time was "Revenge." He was troubled and angry and lashed out at every opportunity and yet, Naruto and Sakura kept forgiving him despite the fact that the conversation was likely gonna end with Sasuke saying "You know this doesn't mean we're friends" or something. But now Naruto and Sasuke, two-thirds of Classic Team 7, are absolutely wrecking Momoshiki who, again, no one likes. 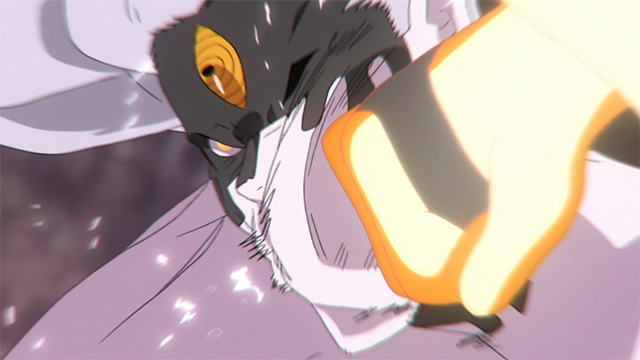 Naruto and Sasuke taking on Momoshiki isn't just a great fight because it's very well animated, but because it's ceaselessly satisfying in a variety of ways. You get the pay off to years of Naruto/Sasuke rivalry, you get to watch Boruto appreciate his Dad's fighting skills, and you get nasty Momoshiki getting slugged by two of the best in the business. And though the fight ends with the equally satisfying addition of Boruto landing the final blow with assistance from Naruto and Sasuke, the most memorable chunk is this beatdown. You go, Dads.

VOTE FOR THE NEXT FIGHT SCENE FRIDAY HERE:

What is your favorite fight in the Naruto franchise? Let me know in the comments!