FEATURE: Here's the Dirt on Every Beef in Haikyu!!

Where's the beef? It's all on the volleyball court 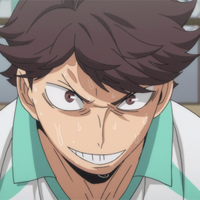 This article written by Noelle Ogawa was originally published on January 31, 2020

Sports anime is about many things — the power of friendship, the want to see your fave on top, but also some good old-fashioned sports rivalries. You don't hate your rival, but they sure get you riled up. You want to do your best to prove yourself, but also you want to prove your worth to them by beating them at their own game. To that, Haikyu!! is no exception, filled with a great many rivalries that hurt, that heal, that push everyone to do better. In no particular order, here are some of our faves! 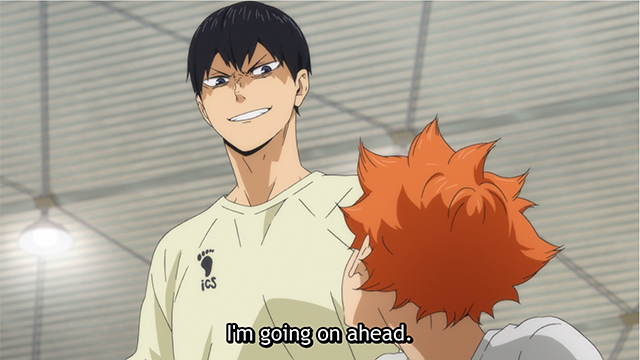 The one that started it all! This rivalry seems to propel the series forward, and despite them working together for four seasons to beat some really powerful teams, they still really annoy each other. Hinata and Kageyama started out on opposite sides of the court and have kept that mentality despite being mutually beneficial when it's game time. But that's the fun of Haikyu!!, right? They are constantly pushing each other to climb higher and they probably wouldn't evolve if they weren't butting heads and comparing each other all the time. With Hinata in an especially sour mood now that Kageyama is at a special training camp, it'll be really fun to see what Hinata does to try to get the upper hand. 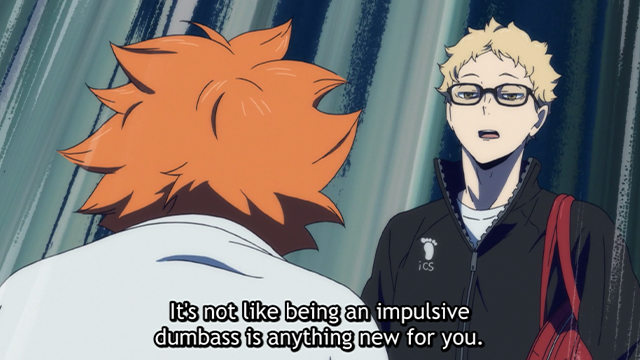 The sun and the moon, which one shines more? Tsukishima has a natural gift, being one of the tallest members of Karasuno, but what he has in talent, he lacks in motivation. To him, volleyball is just a game, and games don’t need his full attention or effort. It's an attitude that can cost him early on. On the flipside, Hinata doesn’t have the height to give him an advantage, so he has to work twice as hard. Hinata loves volleyball despite the odds. That high energy and enthusiasm is nothing but annoying to Tsukishima, who for the longest time, held himself back. There's also no avoiding Tsukishima's sharp remarks and verbal daggers, which Hinata has no defense for. Spirit's not enough to block a well-timed insult. 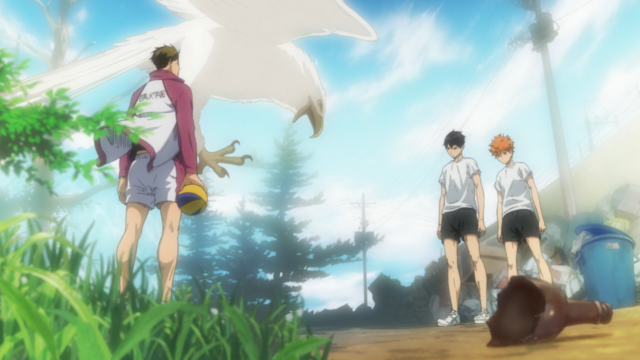 Not only is Shiratorizawa extremely powerful, but they also consistently sweep the Miyagi competition to go to Nationals. It's not hard to say they're one of the biggest threats in Miyagi, if not more than Seijou. One of the top three spikers in the nation, the powerhouse Ushijima Wakatoshi, has long since believed that results speak for themselves. Ambition without any backing is pointless, and so Hinata challenging him really grinds his gears. Hinata wants to win and will work as hard as he needs to succeed, and even confronts Ushijima on his own territory. Talk about bold! The battle between them isn’t just about skill, but about ideals and whether the determination to break through is enough. Force vs force! 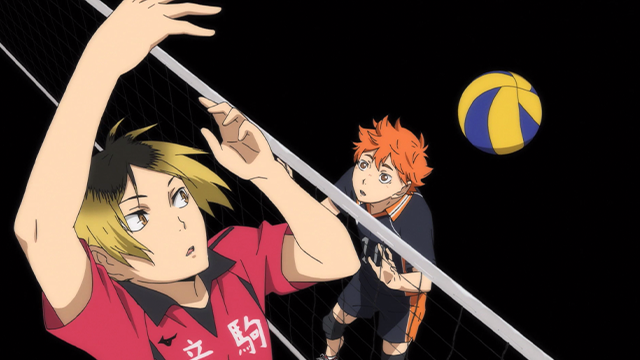 Who will become the true dark horse to make their way to the top? Nekoma and Karasuno are fated to fight; the battle of the trash heap has been building for years. They may be friendly, but eventually, only one of them will come out the winner. There are many standout matchups in this fated duality — the polite yet firm annoyance between Kuroo and Sawamura, the mutual tough respect between Tanaka and Taketora — but there’s something brewing between Kenma and Hinata. The two are friendly, but Hinata has the rare privilege of being one of the few people to get Kenma motivated. Kenma's a bit of a slacker; he's the furthest thing from a jock, and he's not very ride or die for the sport. But when he puts in his all, he can outsmart everyone on the court. The brain of Nekoma surely has some tricks up his sleeves. The resulting clash between these cats and crows is sure one to remember. 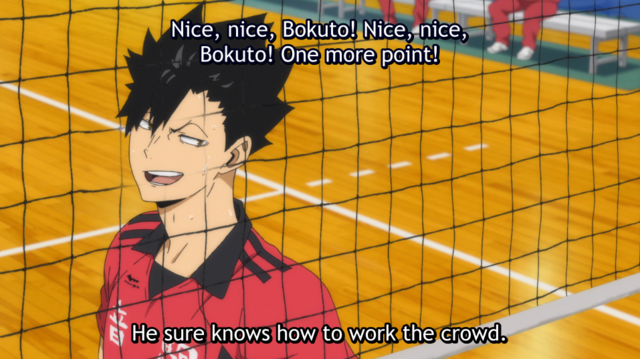 They’re friends, they’re rivals, they’re both maniacs who stay late to practice the sport when everyone else takes a break. Bokuto, as one of the hardest-hitting spikers, is a threat, and Kuroo is one of the few people capable of shutting him down. Bokuto and Kuroo are a fun pair, they play off each other well and are good friends. On the court, they get rid of the formalities and fight to their heart's content. Knowing someone well also means knowing what they're capable of, and neither gives the other a single chance when they get serious. Bokuto has raw power, able to smash the ball all the way into the crowd, but Kuroo's got a sharp brain and some quick defenses. Sword against shield, friend against friend, and only one walks away the winner. 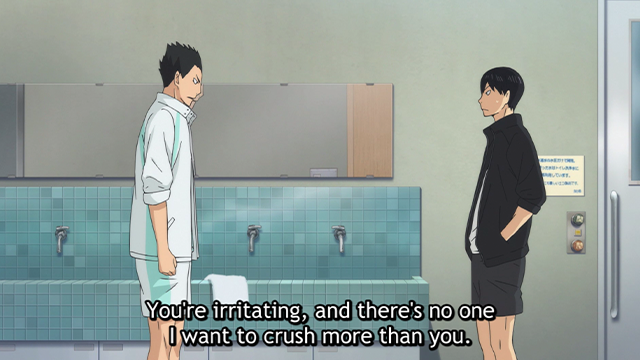 The King of the Court once had subjects who rebelled against him and toppled his reign. For Kageyama, that betrayal was a wound that still hasn't healed, and the title of King haunts him to this day. Kindaichi and Kunimi still feel that resentment, but are working to be players in their own right. At the same time, there’s still a lot of bitterness there, one that sparks into a conflict. They’re on different sides now and they have to defeat the other in order for their teams to advance. There's so much missed potential here. They could've been great, but it didn't work out, and everything's turned sour. For now, it isn’t just how they work to defeat each other, but how they all manage to grow away from each other. 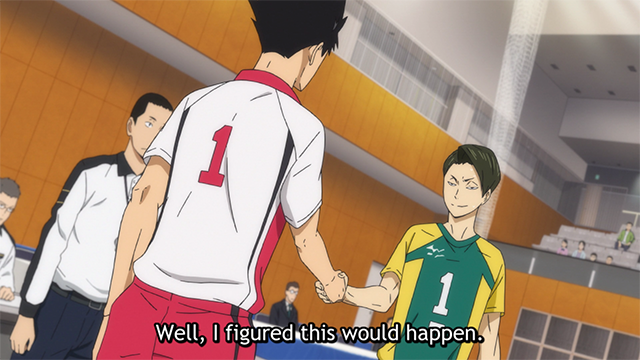 The two of them clearly have some sort of history. Kuroo is cunning and two-faced (and has no problem making fun of Daisho getting dumped by his girlfriend) but Daisho is cunning and two-faced as well. While Nekoma operates in letting their strategies trip up their opponents, Nohebi relies not on their team strength, but through the judge’s goodwill. Daisho knows that the referee is making the calls and people love a nice and charming young man, don't they? They are model and polite, and sympathy is a weapon that can be wielded to gain the upper hand. Worst of all: it works. We all know the annoyance of seeing that in action! It’s a battle of the brains, who can outwit the other, with underhanded tactics galore. 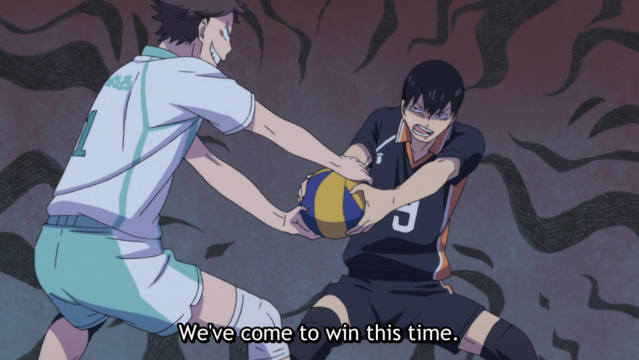 The ultimate showdown of talent vs hard work, of senpai (teacher/master/upper classman) vs kouhai (student/lower classman), of setter vs setter. The first two seasons built up to this stellar face-off. Although Kageyama has always looked up to Oikawa’s abilities, Oikawa saw Kageyama’s budding talent as a threat. Their beef isn’t just about who deserves to carry their team to Nationals, but who is truly deserving of the title of setter. Building all the way up from middle school, this rivalry has history. It's an explosion that's been years in the making! Theirs is a heated rivalry, through which we see the true might of a setter and how it’s up to the conductor to orchestrate the movements on the court. It shouldn't be forgotten that this bad blood runs so deep, Oikawa showed up to the Karasuno vs Shiratorizawa match just out of spite! 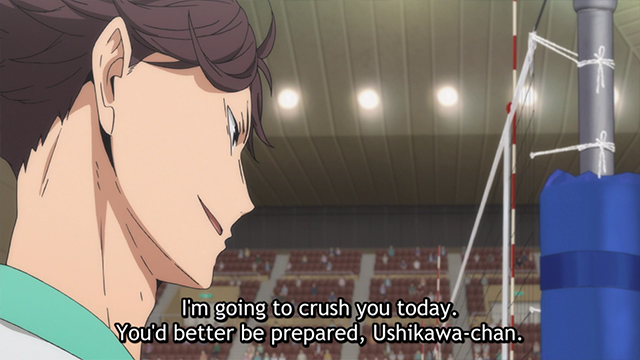 From the very start, Oikawa has been cornered by two geniuses: his kouhai Kageyama and the insurmountable wall Ushijima. Seijou is plenty of a powerhouse on its own, but that is constantly thrown into doubt with Shiratorizawa’s supremacy. Ushijima, being the same age as Oikawa is another reminder that genius can often power through effort, that sometimes your all isn't enough. They're both driven, they're both highly devoted to the sport, and they're both true menaces from Miyagi that are out to defeat each other. Oikawa hits hard with his cutesy nicknames and taunts, and Ushijima ... he's as frank and polite as ever. They're rivals alright, but it's definitely more one-sided from Oikawa's side. 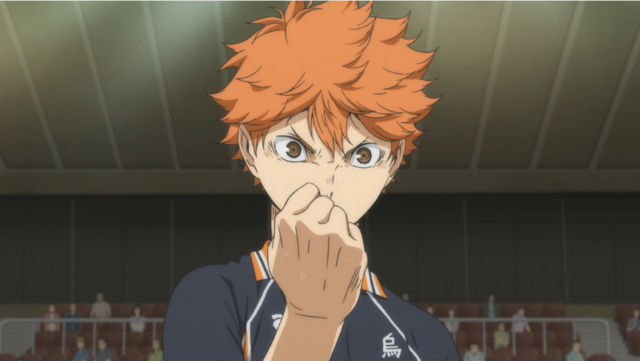 Hinata vs the World

Hinata has a lot to prove. Not only is his height seen constantly as a disadvantage, but he is on a team that is long past their former glory. As a result, nobody expects anything of him, and this season, we see that most people see his results as something largely attributed to Kageyama’s help. Hinata may have the spirit, but he needs to prove himself to everyone who doesn't believe in him to show that he can be as much of a small giant as the legend he's chasing. After all, most of the series tends to be Hinata inadvertently picking fights with people. Show the world what you've got, Hinata!

What's your favorite rivalry in Haikyu!!? Let us know in the comments!