FEATURE: How 86 EIGHTY-SIX's Uses Chronology to Perfect the Art of Adaptation

I cover you, you cover me 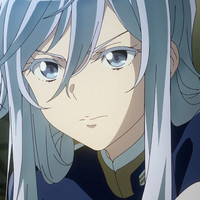 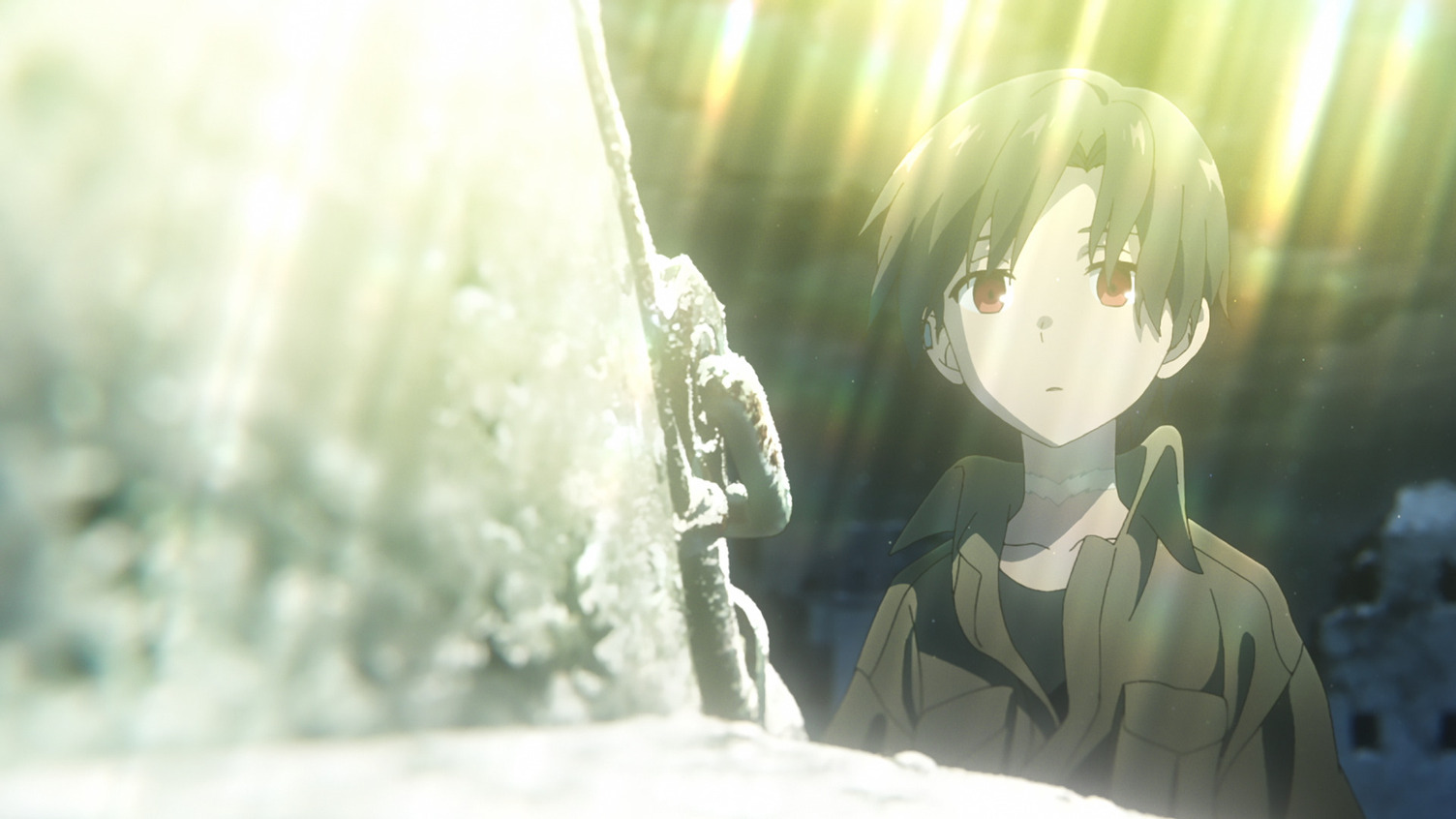 The very first thing we see in 86 EIGHTY-SIX  is a train track. Our heroes, long-serving soldier Shinei “Undertaker” Nouzen and his Spearhead Squadron, race along it toward the horizon in their insectile Juggernaut vehicles. Beyond that horizon is the all-consuming fire of the front. It’s a classic metaphor: In the Republic of San Magnolia, war is a one-stop ride to hell and death. The future of the Spearhead Squadron was determined long ago.

But 86 EIGHTY-SIX is not just the story of Undertaker. It’s also the story of Lena “Handler One” Mirize, a promising young strategist with deep reservations about the war her country is running. A war in which the minority populace of the Republic of San Magnolia are used as disposable cannon fodder. Lena is allowed to have these reservations publicly because of her family’s connections. She has not yet internalized that her own scruples do nothing for the soldiers under her command and that the good, honest war she wants is not possible under the corrupt institutions that run San Magnolia. The Spearhead Squadron, put under her command, understands this intimately.

86 EIGHTY-SIX is a tale of two train tracks running parallel: thwarted idealism on one side, cruel violence on the other. This is already a serviceable set-up for a war story.  After all, the original 86 EIGHTY-SIX novels were popular enough in themselves to score an anime adapted by rising director Toshimasa Ishii. All they had to do was to follow these two tracks, side by side, to their inevitable climax.

Instead, Ishii and his staff took a risk. 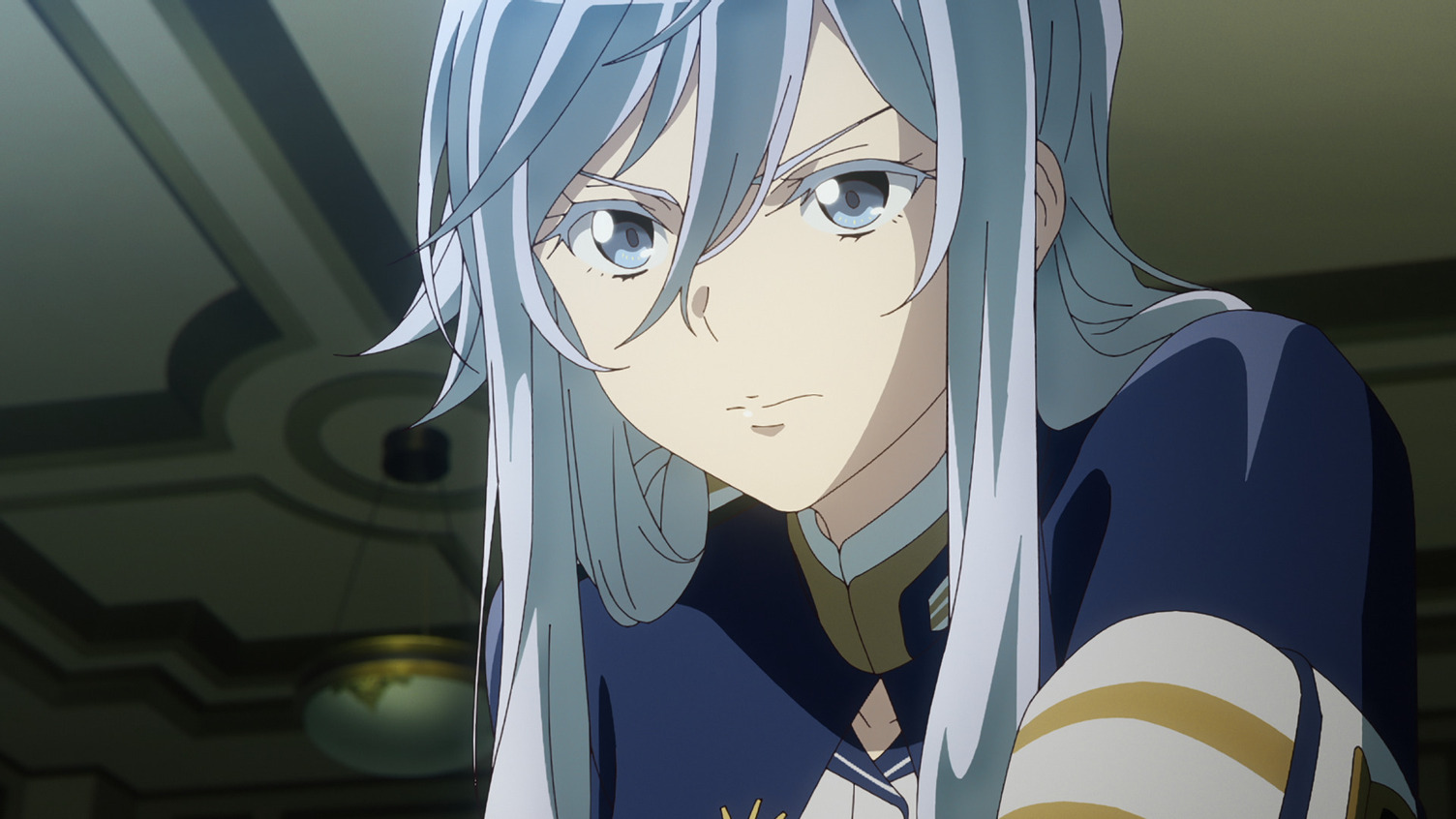 In the third episode of 86 EIGHTY-SIX, Lena speaks over a remote connection to Undertaker and his posse in the mess. We see that the Spearhead Squadron doesn’t quite know what to make of their commander; she’s nicer than some, but the way she pretends to understand them despite operating from an outrageously privileged position of power makes them uncomfortable. Bitter soldier Laughing Fox grits his teeth in the corner. Others joke about the cat that hangs around the mess, who every member of the squad has given a different name.

In the second half of the episode, we see Lena’s side of the story. Unlike the warm communal space of the Spearhead Squadron, she lives within a sterile glass palace of small luxuries. We see the ways in which Handler One is frustrated by every interaction she has with her peers, none of them troubled by the societal contradictions that agitate her daily. Then she calls up the Spearhead Squadron, and suddenly we find ourselves in the middle of the conversation that Undertaker and his teammates had with her earlier. We see her laugh about their cat with many names. 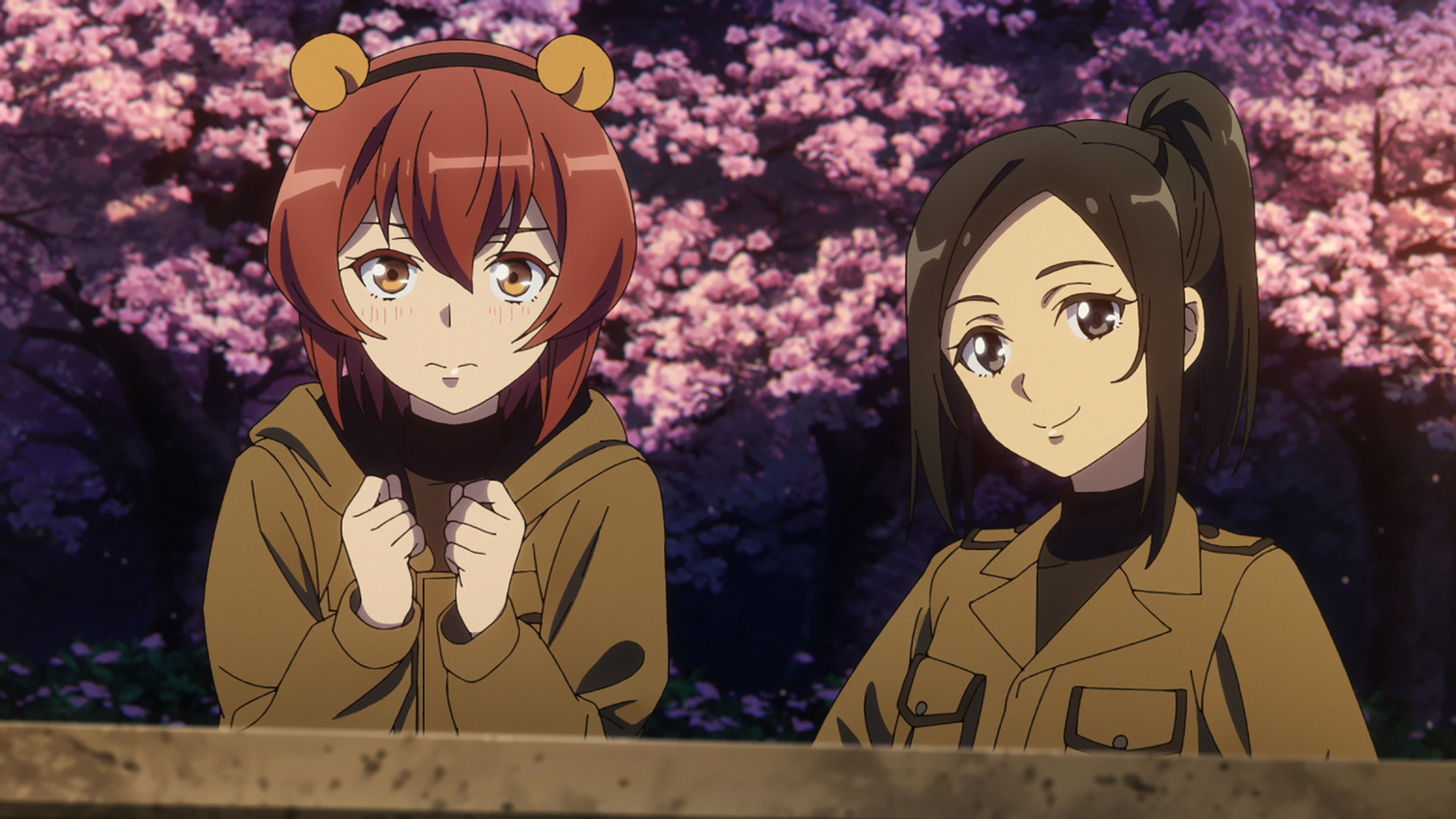 The 86 EIGHTY-SIX novels do not do this. They do cut between Handler One and the horrors of the front, but save for a flash-forward prologue, they are structured in chronological order. This lends itself to a smooth reading experience. By contrast, the staff of 86 EIGHTY-SIX continuously find new and exciting ways to break up that smooth narrative experience to better convey how constant stress and exposure to violence fractures time. Scenes jump cut unceremoniously from one locale to another. At other times, key details are left out, only to be filled in later. Warmly depicted sequences of characters bonding outdoors transition without warning into intense battles, because to live as a member of the 86 is to be in constant proximity to death.

The majority of anime these days are produced systematically. Take a popular manga, produce storyboards that roughly follow the source material, and then animate them. Novels give a bit more leeway, but diverging too far from the text can be dangerous. Just a few years ago, the staff behind the ambitious project Boogiepop and Others ended up in hot water when the original novel’s illustrator expressed disapproval regarding the new character designs. Fans can also be hard to please. To produce work that not merely replicates, but adapts source material can be a risky choice. 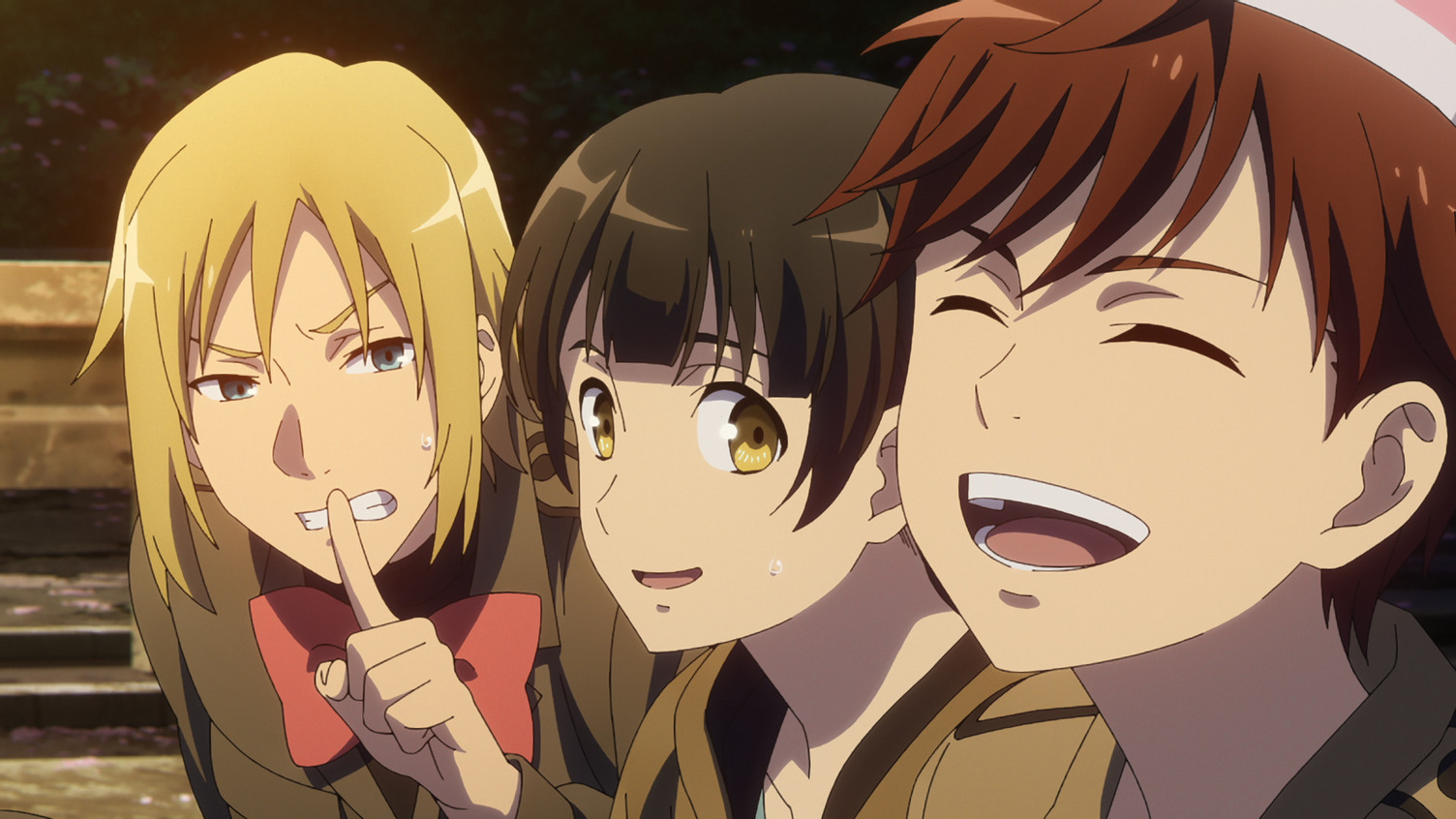 Toshimasa Ishii and his crew are not just replicating the story — they are adapting for the screen. The way in which time has been used in 86 EIGHTY-SIX to brutalize, to heighten suspense, to strengthen the walls separating members of the cast, is a technique unique to film. When reading a novel, the reader determines when and how time advances. They may read as fast or as slow as they like. But the length and pace of an episode of 86 EIGHTY-SIX is determined from the start, in the same way a train track is laid. Other changes are made, as well — a key scene in episode four is relocated in such a way that further fleshes out the setting. In a sequence that sold me permanently on Ishii’s approach to this show, a shooting star in the third episode of the series is bookended by Lena’s flying tear caught on the surface of a vase.

Despite how it has been changed in adaptation, 86 EIGHTY-SIX remains 86 EIGHTY-SIX. It’s an adaptation of a popular light novel that pits teenagers in scrappy machines against autonomous drones. As someone who doesn’t read a lot of light novels and finds Undertaker’s stupendous victories with substandard equipment a bit improbable, I found myself drawn into the series despite myself. It’s a show made with intentionality that wants the viewer to pay attention to its framing and ask questions. How does the time difference between Lena and Undertaker’s storylines underscore the difference between their social classes? What does the series accomplish by telling us in advance a character will die, rather than hide that death as a shocking twist as the source material does? What might happen if these two tracks ever connect? I hope someone out there is watching and taking notes. 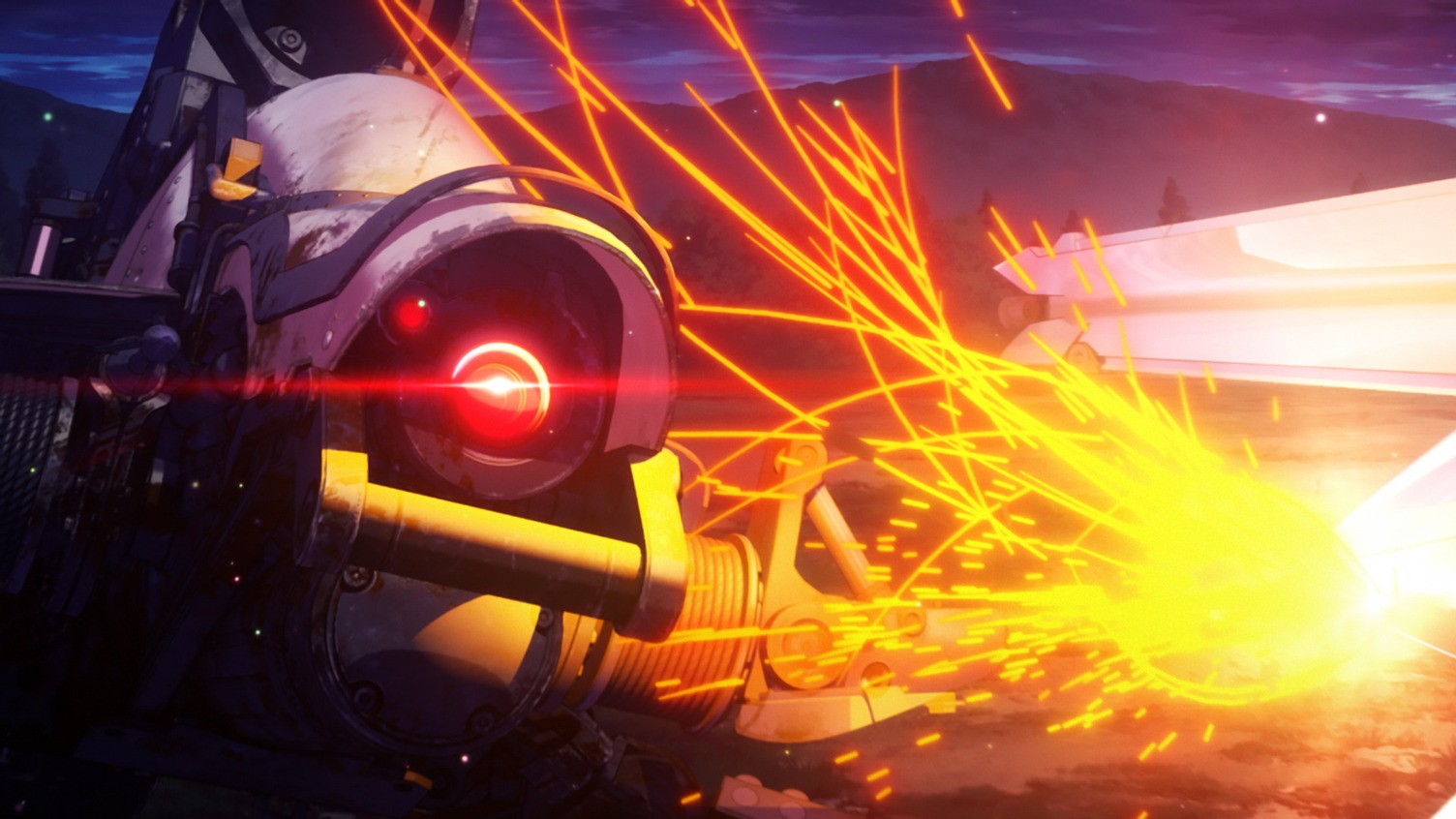 Are you watching 86 EIGHTY-SIX? Are you a fan of the light novel? Will Shinei ever finish reading his copy of All Quiet on the Western Front? Let us know in the comments!

Adam W is a Features Writer at Crunchyroll. When he is not trying to figure out what other books Shinei keeps in his war fiction library, he sporadically contributes with a loose coalition of friends to a blog called Isn't it Electrifying?You can find him on Twitter at: @wendeego