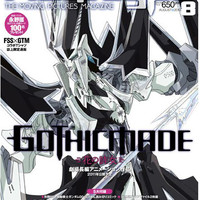 Mamoru Nagano fans waiting over half a decade for the return of his distinctive brand of elegantly designed mecha epic in Hana no Utame Gothicmade should be happy to see a new trailer, suggesting that the long gestating project will in fact hit Japanese theaters on November 1st.