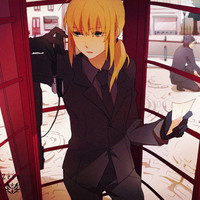 Set to run on Neon Alley Fridays starting April 19th, a new preview offers an early look at the English dub of Fate/zero.