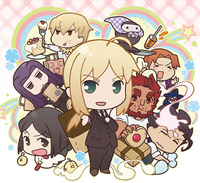 It was first announced on the first day of this year's Machi Asobi festival, but the official site for the Kara No Kyoukai -The Garden Of Sinners- movie has been updated with the announcement of the anime adaptation for Fate/Zero Cafe, the spin-off manga with deformed Fate/Zero characters and will be also featured at the theaters in Japan in a double billing later this Summer. 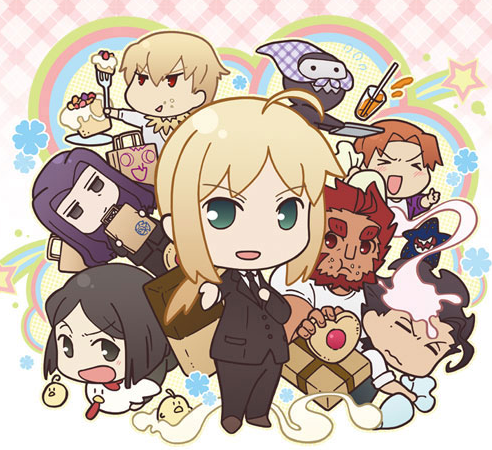 The story takes place at a cafe that Saber manages. The manga run in anime magazine, Gekkan Newtype. 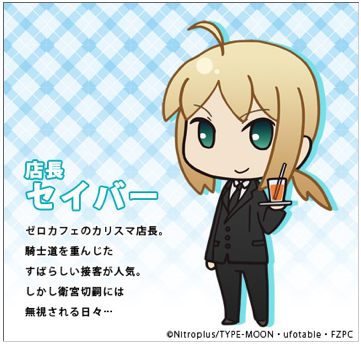 The charismatic manager of Zero Cafe, Saber. As popular as she is, Kiritsugu still ignores her. 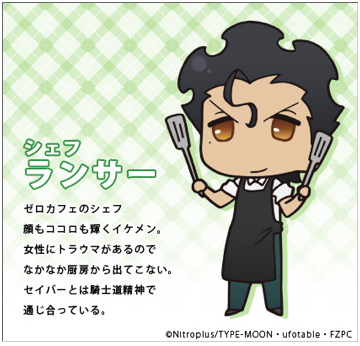 Lancer, the chef. Stays in the kitchen because of his traumatic history with women. 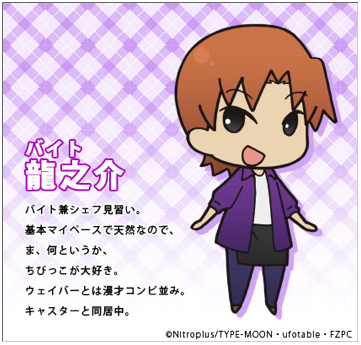 Literally, the devil is a part-timer! Ryunosuke rooms with Caster while working part-time at the cafe. Sounds too familiar, doesn't it? 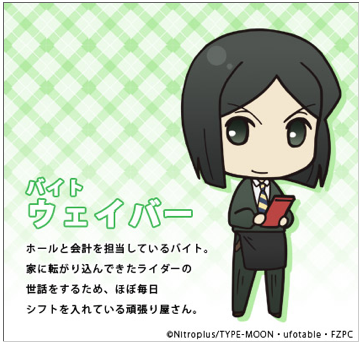 Another part timer is Waver. He works everyday to support his roommate, Rider. 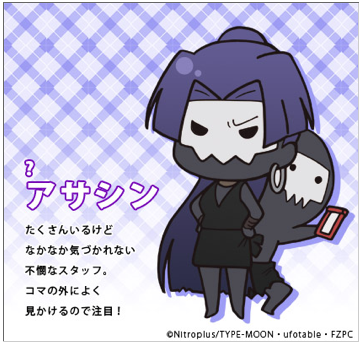 Took over the cafe on April Fool's Day this year. 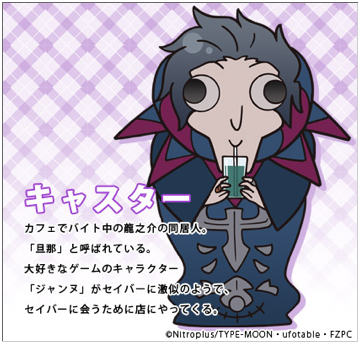 Caster comes to the cafe to see Saber because she looks like his favorite videogame character, Janne. 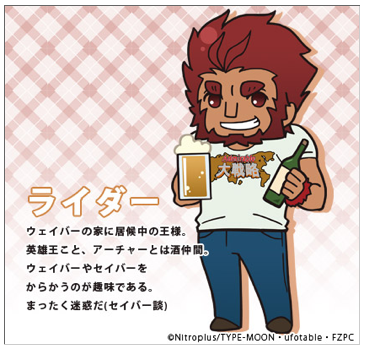 The king who is staying with Waver, Rider finds joy in making fun of Waver and Saber. Saber is not amused. 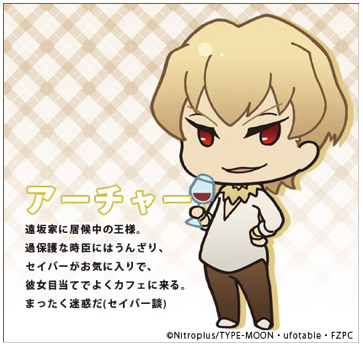 The king who stays with Tohsaka family. Getting tired of over-protecting Tokiomi, he escapes to the cafe to see Saber. Saber is not amused. 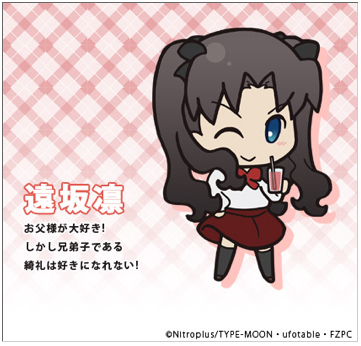 Rin loves her dad, but does not like Kirei. 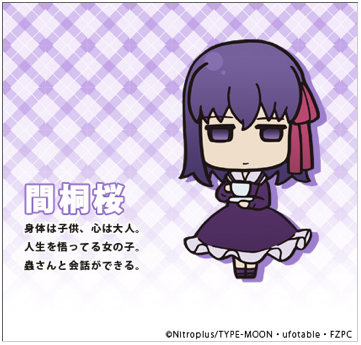 Sakura, a woman in a little girl's body. She can talk to bugs. 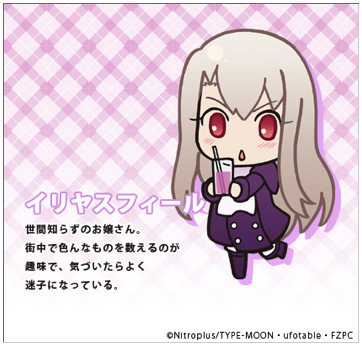 Sheltered little missy, Illyasviel loves to count things when she is in town but often finds herself lost. 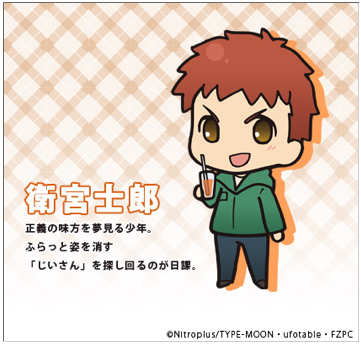 Shirou dreames to become a hero one day. He is always looking for his old man. 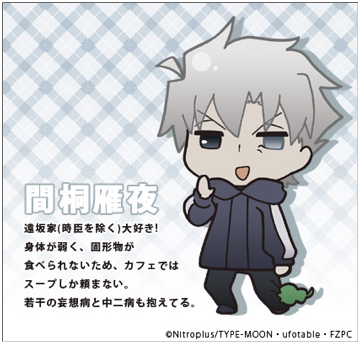 Kariya loves the Tohsaka family, except for Tokiomi. Due to his health condition, he can only consume liquids and only orders soup at the cafe. Mentally, he has an extended imagination and a bit of a "Chuninbyo" tendency. 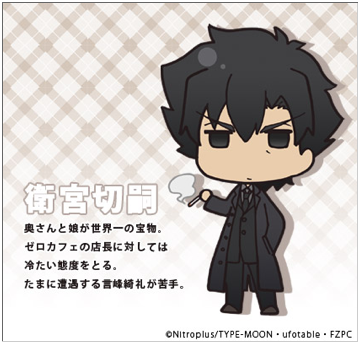 Kiritsugu treasures his wife and daughter as his number one in the world, but acts very cold to the manager of the cafe. He does not enjoy running into Kirei. 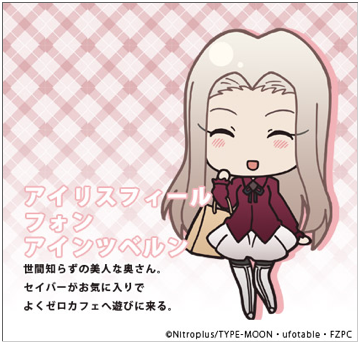 Sheltered Irisviel is Kiritsugu's beautiful wife. She often drops by the cafe to see her favorite, Saber. 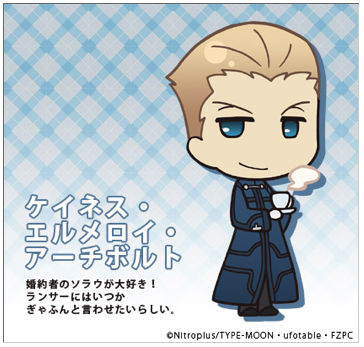 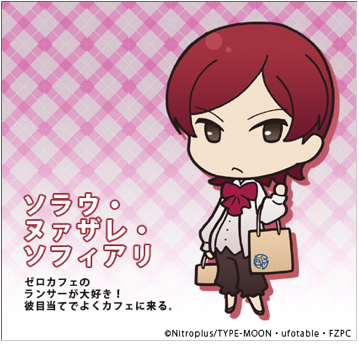 Sola-Ui loves Lancer! Comes to the cafe to see him often. 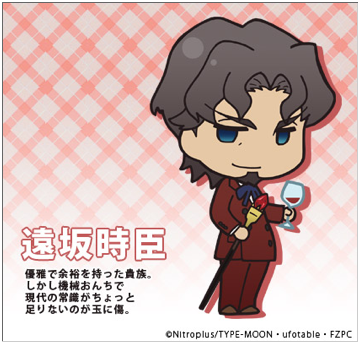 Elegant noble Tokiomi is not really good at the current IT revolution.

Saber makes Rin cry for mistaking Kirei as her father.