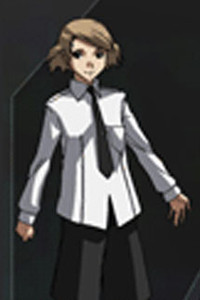 Diese Seite teilen:
InfoPhotos (0)Reviews (0)Forum (0)Fans (1)Comments (0)
[Bearbeiten]
Überblick
Linebarrels of Iron (鉄のラインバレル, Kurogane no Rainbareru?) is a Japanese manga series created by Eiichi Shimizu and Tomohiro Shimoguchi. The series was first serialized in Akita Shoten's monthly shōnen manga magazine, Champion Red, in 2004. It has since been compiled into eleven tankōbon, as of November 20, 2008. The story centers around Kouichi Hayase, a fourteen-year-old boy living a mediocre life, until an accident turns him into the pilot of a gigantic robot called "Linebarrel" and leads him to encounter a mysterious girl.

An anime adaptation of the manga series was announced in the February issue of Animage magazine. The anime is directed by Masamitsu Hidaka and animated by Gonzo. Though the world premiere of the first episode took place at Southern California's 2008 Anime Expo, the series premiered in Japan on the television network TBS (Tokyo Broadcasting System) on October 3, 2008. The anime broadcast a total of twenty-four episodes, with the last of which airing on March 20, 2009. To commemorate the series' anime adaptation, Shimizu and Shimoguchi decided to create a one shot manga, recreating the entire first episode of the anime, in which the plot differs in many aspects compared to the beginning of the manga.

The Linebarrels of Iron story takes place in a fictional alternate future, centering on a junior-high school student named Kouichi Hayase, who escaped his daily life of being bullied as a child by daydreaming about being a hero. His life was forever changed during a class trip in the year 2016 when an artificial satellite fell from orbit. Due to this "accident", Kouichi was left in a coma for half a year, and upon awakening, found himself with strange powers, including superhuman strength. Then, in 2019, a mysterious robot called "Linebarrel" appears before him. It is revealed that the accident from three years ago was not caused by a satellite, but rather by the Machina robot Linebarrel, and that this turned him into a "Factor", which is the name given to Machina pilots. This leads him to encounter Emi Kizaki, a mysterious amnesiac girl whose unknown past seems to be related to Linebarrel. He joins her in fighting for JUDA, the world's largest medical equipment maker, which happens to secretly own several other Machina robots.

There are two kinds of robots in Linebarrels of Iron: Armas and Machinas. The series primarily focuses on Machinas, robots which are not manufactured by humans and are powered by nanobots called D-S.O.I.L., which also enables it to regenerate after being damaged. Since D-S.O.I.L. is like artificial muscle for the Machinas, they tend to "bleed" when they are damaged.

Machinas are also considered to have their own consciousness, as only their chosen "Factor" can pilot one, and should the Factor be killed, it will go on to find a replacement. The overlying reason for this is that all machinas are incapable of intentionally killing another human on their own volition; they need a "Factor" i.e. another human, who would be the one who "kills". Interestingly, the Factor need not be actively piloting the machina for it to kill, as revealed when a rampaging machina called Apparition was brought down by JUDA and the then-unaligned Hayase and it was found that the (dead)Factor was drugged and restrained inside it. Should it kill someone without a Factor's "assistance", usually by accident, a machina has been known to resuscitate and heal the person by injecting their D-S.O.I.L nanobots into them, which in turn makes the person a Factor. This is case for Factor Reiji Moritsugu. In the case of Kouichi Hayase, then-Linebarrel pilot Emi Kizaki begged Linebarrel to heal him, which turned him into a Factor, at the expense of making Emi a less desirable Factor to Linebarrel ("It" doesn't want Emi to fight). In the anime it was revealed that Hayase's friend Hideaki Yajima was also resurrected by the machina that caused his death.