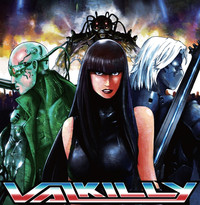 A prediction from the year 198X: our future will be ultra-dark. Technology will be scary. Super computers will run amok, and mirror-shaded cyborgs will struggle to retain their sexy humanity in a battle against evil mega corporations and robot mercenaries. Such was the dangerous vision of the science fiction movement known as Cyberpunk.

During the ‘80s and ‘90s, cyberpunk was one of the coolest things happening in pop culture and gave us landmark movies like Blade Runner and novels like Neuromancer. However, now that high-tech advances in the real world have given science fiction a run for its money, the cold industrial future of cyberpunk has become positively retro.

Back in the day, Japan embraced cyberpunk and put its own unique spin on the genre. And now, a Japanese techno group called VALKILLY is helping to keep the spirit alive...

We asked Franck Shigetora, the mastermind behind VALKILLY's music, to select his top five favorite examples of Japanese cyberpunk and his list is below!

First of all, Akira, Megazone 23, and Ghost in the Shell are not listed in this top 5. I presume you know these titles even if I don't take up some of this precious space to comment on them.

Even if you're not a cyberpunk fan, once you start reading this, the fun never stops. It's the best manga, with the madness of human-like desire that only cyborgs -- not androids -- have, depicted together with hardcore violence. I'm not gonna spoil the whole story. I just want you to read it.

A cyberpunk anime about the battles of boys and girls with special powers who are searching for their true selves. The story is set in the present, but it's a reality brought about by the secret underground development of super technology. The shocking and extremely refined story development unfolds at a good pace so you won't get sick of it after just one episode.

3. Junk: Record of the Last Hero

A manga from the famous Kia Asamiya, who also did Silent Moebius. Seven volumes in all. A hikikomori boy's life is changed when he is selected to be the monitor of a power suit after being recruited online. This is a masterpiece where wild ideas about super technology explode brilliantly across the pages. Since the protagonist is not a hero, his actions are exceedingly realistic. You can probably sympathize with him even easier than with Evangelion’s Shinji Ikari.

Strictly speaking, this 1992 live action film is not a cyberpunk movie to do with technology, but with super powers. However, it ranks here since it seems like creating human weapons from cells with super powers is one way to make a cyborg. I suppose you could also call it "iron punk?" However, the visuals are out-and-out cyberpunk. Plus, since many parts are shown through images you can enjoy it even without understanding Japanese, so I recommend it for overseas viewers as well.

A 1989 giant robot special effects movie distributed by Toho (makers of Godzilla). The soundtrack is industrial music and the characters are extremely cyberpunk. It probably seems like a Japanese cult classic, but since it was such a big deal at the time, among Japanese people in their 30s and 40s it might be even more famous than Akira…It is often compared to the 1990 American SF movie Robot Jox.