As the fall release fast approaches, Destiny shows us its guns 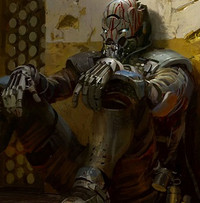 During my teens I spent what a licensed clinical psychiatrist would describe as an "unhealthy" amount of time playing the original Halo: Combat Evolved at LAN parties. My experience was in no way unique--during that time it was your skill at Halo, not Street Fighter [Editor's Note: HEY!] or CounterStrike--by which your worth as a gamer was measured. My interest waned after repeated releases, but Halo has never left my list of the greatest video games of all time. After seeing the press releases about a new big-budget franchise from Bungie including popular acting talent like Giancarlo Esposito and Peter Dinklage, I was cautiously optimistic about seeing something new, as I felt the first-person shooter market had grown stale. Now that I've played the beta, I'm happy to say that I am very excited about the full release.

It is hard to talk about Destiny without talking about Halo first. Halo: Combat Evolved was a rare, landmark title which defined an entire era of first person shooters. When a game like that is released, the objective of the market becomes replicating or improving upon the title's success until another game comes along to change the market again. The challenge for a developer is repeating their success, which is risky business when expanding the tried-and-true limits of the market. There are many ways to fall short when innovating and, if anything, Bungie's reach has only grown by trying to establish a whole new genre of gaming. 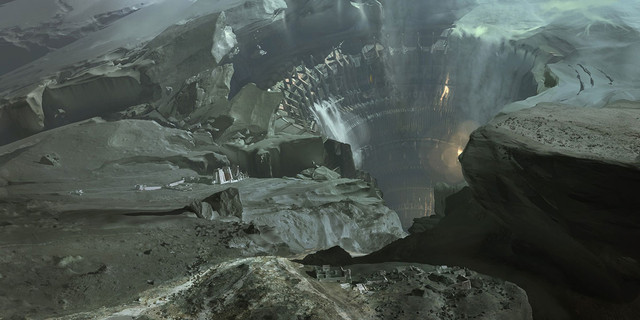 It's hard to describe the little ways that Bungie has given Destiny its mythic feel. The opening cinematic was somber and absolutely gorgeous. The use of language in the narration by Peter Dinklage seemed to play a large role in conveying the grand scale of the events which changed the fate of humanity as well as the absolute destruction Earth now faces. Fatalistic tones in character dialogue really lend themselves to conveying the sense of impending doom and an evocative score by Halo's Michael O'Donnell really drive home the highs and lows. While the controls are precise and responsive to fit the needs to a competitive first-person shooter, the activation of the special abilities are dramatic and impactful in combat. Even as just a beta, everything about Destiny has a very finished feel. 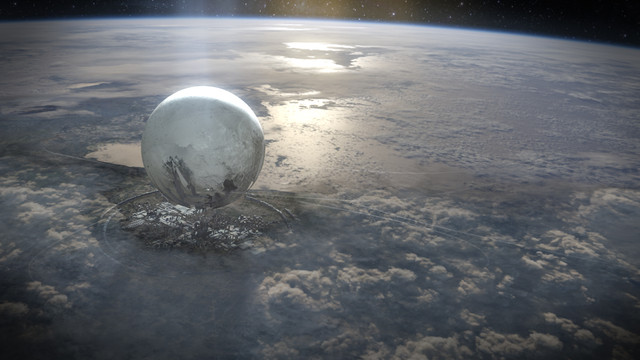 Asimov, eat your heart out.

The visual beauty of this game cannot be understated, especially given my increasingly high standards driven by PC titles. As one of the early releases for the Playstation 4, Destiny is really setting the bar high for the visuals of future releases. After the opening exposition, I mistakenly thought the game was still in pre-rendered cinematic when it cut to the Russian skyline. The graphical quality matched with the grand architecture and unique conceptual design of a fallen utopia really give the game a very solid identity. I spent an unusually large amount of time appreciating the lights of the city below the Guardian tower, the towering unlaunched colony ships in Russia, and the sunlight on those beautifully rendered clouds. I'm not sure if this was an intentional move by some mastermind marketers at Bungie HQ, but the beta left me chomping at the bit by not only limiting its free content to the planet Earth (unless you have PS Plus), but allowing you to hover over some missions in the moon without actually letting you play them. With the promise of levels on Mercury, Venus, and Mars, I can't wait to roam around some alien terrain. 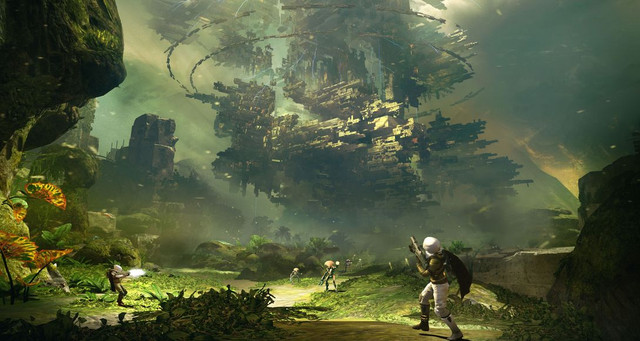 And somehow I ended up in Russia...

Possibly one of the most fun experiences I had with the beta was landing on the planet without choosing a mission. This brought me to the same map I had been travelling through to reach certain areas of interest in story mode but with no clear objective. In this mode, you can wander freely to fight squads of hostile aliens, search out beacons from the Guardian tower requesting aid, join dynamic in-game events with other players, explore dark basements where the strongest of the Fallen dwell in darkness, or just find environmental features to use as ramps to jump your Sparrow. Despite the level 8 cap in the beta, I was able to return to the game many times just to use this feature even after maxing out my three characters. This feature also allowed me to discover how truly massive just the one available map is. Even though there are a very limited number of story missions in the area, it was several hours exploring before I was able to find all of its dead ends. Given that some of them were closed doors with windows revealing more terrain on the opposite side, the map in the full release may be even larger. 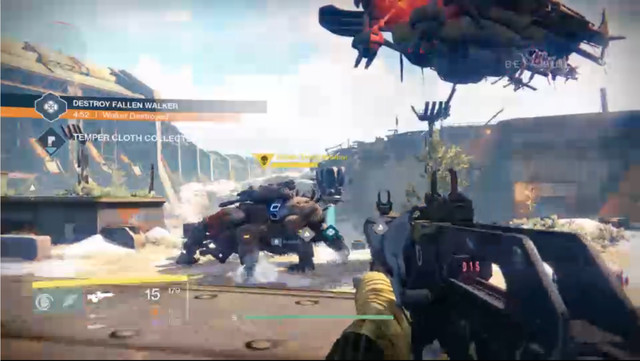 From a design perspective, which is so vital in innovative titles, I was impressed. Bungie has avoided defining their game in terms of an MMO, preferring the term "shared-world shooter," which seems accurate as it cuts the fat from many features familiar to a traditional MMORPG. Many features are highly streamlined, likely to limit the downtime most MMOs spend on inventory management. Equipment isn't held in a shared inventory with all other items but instead subdivided into groups based on the item type. In fact, the game seems geared toward spending as little time as possible in menus. That said, there are a few curious features which defy this theme of simplicity. After leveling up or unlocking a weapon ability, you still have to go into the weapon menu to manually activate the upgrade. Seeing as how there is only one option available to you, this seems like an unnecessary step. The Guardian tower also has a shop where you can buy cosmetic upgrades for your space ship, which only appears in the travel menu. 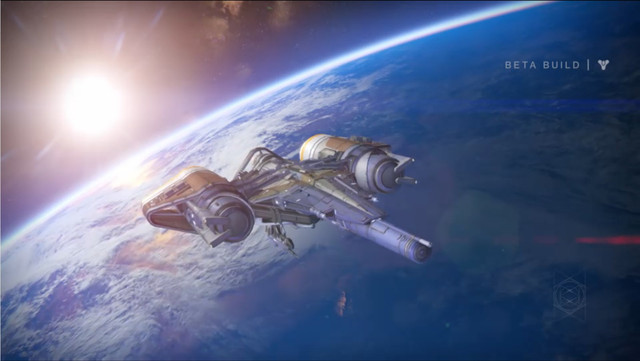 This loading screen comes in several different models and colors.

As impressive as my experience with the beta has been so far, I have a few concerns about character development heading into the late game. The system of level advancement, while rewarding, is extremely rote. Although each class is fairly distinct, members of the same class all develop an identical ability kit which is unlocked at a predefined rate. For the purposes of PvP, this could mean that all players will have one of three ability sets with the only distinguishing factor between them being a relatively limited choice of weapons. The same is also true regarding the choice of races in game: there is no in-game difference based upon your choice of race beyond the aesthetic, which is indistinguishable everywhere but the Guardian tower since that is the only location in which you do not wear a helmet. 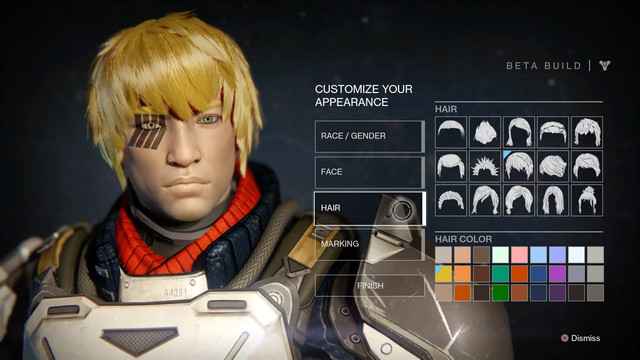 Sorry, Nate. No one will be able to appreciate this brilliance.

The story is another potential issue. I'm a sucker for space operas and the foundation of the narrative established in the Destiny beta shows a lot of promise for a truly epic tale. That said, there are a few too many elements from the Halo franchise for my comfort. The Fallen and The Hive bear a more-than-passing familiarity to The Covenant and The Flood. Having a floating AI offering me directions also triggers some unpleasant memories of betrayal which cause me to unwillingly distrust Peter Dinklage's voice. While the two franchises bear many conceptual similarities and there is nothing wrong with these specific narrative elements per se, I hope that Bungie is really departing from Halo to make truly unique universe in Destiny. 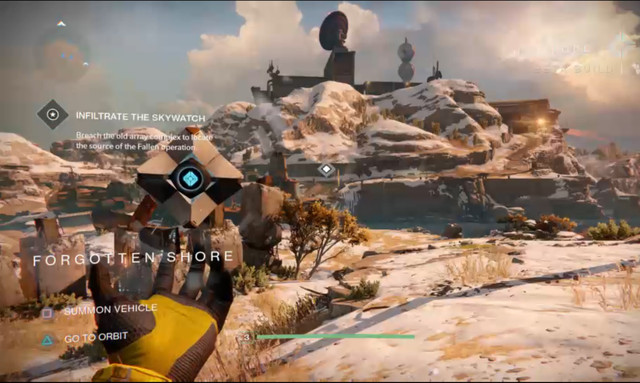 My taste of Destiny was definitely sweet. The quality of the game is undeniable from the outset and I can't really describe the experience as anything but overwhelmingly positive. I believe my concerns regarding the game could be huge factors in its success, but they will likely remain speculative until the full title is released. In the meantime, it seems as if Bungie is in a prime position to release another blockbuster franchise. Destiny appears to have the same trinity of quality, story, and competition, which really set Halo apart during its era.