Get a picture of the small seaside town Uchiura – the setting of Love Live! Sunshine!! 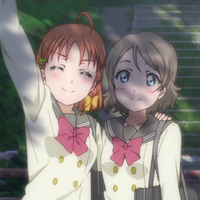 Anime vs. Real Life! takes a look at the real life locations of the idol anime Love Live! Sunshine!! this week. The sequel to Love Live!, which took place in Tokyo, is now set in a small town called Uchiura, in Shizuoka Prefecture.
Uchiura is a small seaside town located on the west shore of the Izu Peninsula, which belongs to Shizuoka Prefecture, roughly south-west of Tokyo. Bits of the show also take place in the large port town called Numazu, just a bit north of Uchiura.  The Izu Peninsula in general is known as a tourist resort area, famous for its many hot springs due to several volcanoes in the northern part of the peninsula, but also for its various seaside resorts.

Fun fact: If you are following the currently airing Amanchu, that show also takes place on the Izu Peninsula. Specifically, on the east side of the Izu Peninsula, in a town called Ito, almost completely on the opposite side of Uchiura.

They even feature the same bus company in both shows. On the left is Love Live! Sunshine!! and on the right Amanchu.

But now, back to Love Live! Sunshine!!. Before the beginning of the show there was a lot of talk about whether or not the new cast could live up to the extreme popularity of its predecessor, Love Live!. To be honest, Uchiura does not seem like a town that would get tons of visitors, but judging on the number of tourists there, especially Love Live! fans (or Love Livers), I would say that Love Live! Sunshine!! is doing quite well so far. So, let’s see how the anime compares to its real world setting. This article will focus on the first episode of Love Live! Sunshine!!.

The opening shots of the show take us the anime dreamland (there is probably not a single anime fan who has not yet heard of this place), Akihabara! The show starting off in Akihabara is a nice little connection to the original Love Live!, since a good amount of the show took place in that famous district in Tokyo.

Sega is doing a lot of promotion for Love Live! Sunshine!! and their arcades are filled with merchandise for the show. In some Sega arcades, there were entire floors dedicated to the show, offering things like towels, pillows, cups, keychains, etc. I don’t even want to mention how much money I’ve spent there – let’s just say it was a lot.

The Akihabara Crossfield complex is a famous building complex in Akihabara – the UDX building is containing the Tokyo Anime Center.

Uranohoshi Girls’ High School in reality is called Nagaisaki Junior High School. I was not too keen about going to the school to take pictures, because a random guy standing in front of a school, taking pictures, could have raised some questions. The extremely nice lady at the information center; however, even encouraged me to go there. In front of the school were a couple of signs, stating that only taking pictures of students and teachers was prohibited.

Takami Chika lives in an actual inn – expect that place to be flooded with fans soon. I regret it a not having stayed there the night, myself.

I have a neat little story to tell, about why I was allowed to take pictures inside of that bus, at the end of this article.

Matsuura Kanan herself works on an island theme park a bit north of Uchiura, called Awashima Marine Park, on Awa Island. The only way to get there is by boat, or (the currently not working) cable car. There is an aquarium on the small island, containing dolphins, sea lions, penguins, and a bunch of other sea creatures. Hiking is also a popular activity on the island. In the anime Kanan works in a diving shop, which in reality is a small terrarium, containing mostly a vast variety of frogs.

Ohara Mari’s family seem to be the owners of Awashima Hotel, or probably the whole island theme park.

There even is a second aquarium in Uchiura itself, the Izu Mito Sea Paradise.

Luckily, nobody tried to jump into the water when I was there.

I know that the show is called sunshine, but trust me, I chose the sunniest day of the week to visit Uchiura. I really tried, so I'm sorry about the relatively cloudy weather in the photos.

Already mentioned before, that’s Nagaisaki Junior High School, or Uranohoshi Girls’ High School in the anime. I feel for all the students who actually have to climb that hill every day – the nearest bus stop is quite far away.

That’s the bus stop for the school, if I recall correctly, the bus only passes that station about six times a day. At this point I’d also like to mention, that studio Sunrise is doing an incredible job recreating the city. Even this little shipyard is so close to its real world counterpart, it really is amazing to see.

I mentioned in the beginning of this article, that there were some discussions regarding the new cast of school idols, and if they could become as popular as their predecessors. Just seeing the crowd of fans (about fifteen different groups of people passed by at that bus stop, in the middle of nowhere, just to take pictures) makes me believe that Love Live! Sunshine!! is on the right track.

The tourist information center in Uchiura is covered in posters of Love Live! Sunshine!!. The locals definitely seem happy about the attention the show is creating for the city and the area. They also had a map with all the locations for the show, which was even up to date! That’s what I call service, unfortunately the information center was the second to last stop I made that day. Sadly, they did not sell any merchandise there – well, I bought enough of that in Tokyo anyways.

Yep, that’s a Love Live! Sunshine!! boat. The best way to get to Awashima Marine Park.

You guys are allowed to guess, which seat I took on that boat.

You might have noticed by now, that there is a lot of promotion going on for the show in the city and even a lot of buses feature the school idols. I want to mention the driver of this bus in particular. I asked him if it was okay if I took a couple of pictures of the bus, so he even stepped out of the bus and gave me a few minutes to take all the pictures I wanted (the bus was empty, by the way). In general, all the locals I encountered in Uchiura were extremely helpful and friendly to me, and also seemed quite happy that a foreigner made it to their little town. If I wasn’t an all too big fan of the series before, I am definitely one now; and I won’t forget my trip to Uchiura anytime soon.

So, what’s your opinion about the new cast, and what did you think about the new setting of the show? Let me know in the comments!