Pure Illusion is a delightful dressing on Cocona's coming-of-age in FLIP FLAPPERS! 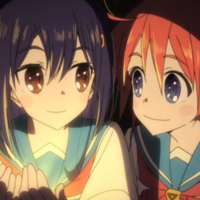 Of all the amazing anime this season, FLIP FLAPPERS has proved the most challenging to unpack. A technicolor hurricane of visual references to medicine, biology, art, and film, it has been careful not to give away too much and still remains enigmatic halfway through the fall season. This exquisite visuals alone have provided fertile ground for interpretation and theory crafting the nature of stunning worlds of Pure Illusion, the vibrant and mysterious Amorphous, and the nature of the epic conflict between Flip Flap and Yayaka’s mysterious organization. All these lights and fanfare, worthy of praise in their own right, camouflage a deeply personal tale that is told through the characters hidden within the set pieces. 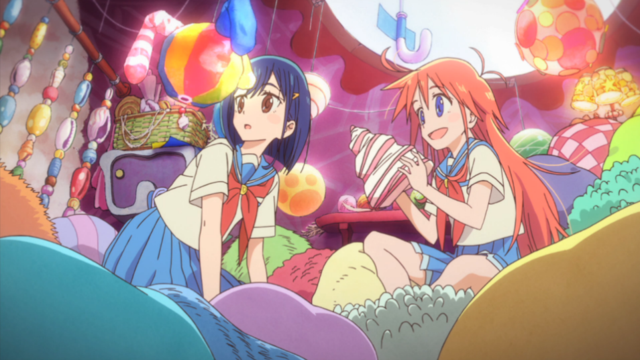 Despite the implications of global domination and the ultimate wish granting abilities of the Amorphous, Cocona, and the series by extension, have expressed little to no interest in the epic conflict. The motivation for her involvement in the collection of the Amorphous is as simple as helping a friend. Meanwhile, FLIP FLAPPERS has invested a great deal of its time into the growing bond between its two heroines and Cocona’s gradual movement toward happiness. Papika serves as Cocona’s guide, helping her escape from the rigid confines of natural law to a world of infinite possibility in Pure Illusion where Cocona is free to create a new definition for herself. On the backdrop of a magical girl series, FLIP FLAPPERS uses the transitory worlds of Pure Illusion as a foundation for change and a tale of self-actualization. 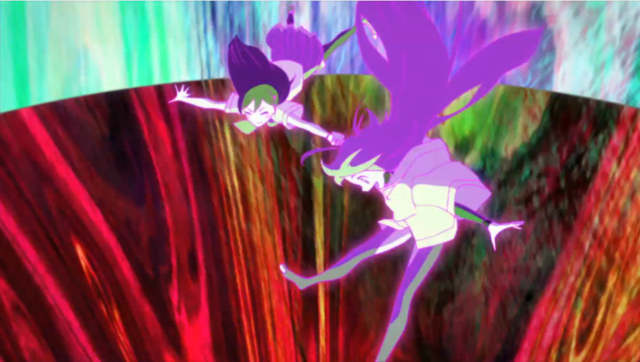 According to Jung, humans each possess Universal Archetypes which are all components of a greater whole. The Self is a unified identity which is a true representation of our core personality, the Persona is the aspect of ourselves which we present to the outside world, the Anima/Animus are the female/male aspects within all of us, and the Shadow is are our primal instincts, both creative and destructive, rejected by our conscious mind. Successful development and happiness are contingent on the incorporation of these often oppositional elements into a functional whole in as process known as Individuation. At this apex of identity, we have achieved balance between our aspects, are in tune with our needs, and are accepting of our desires. 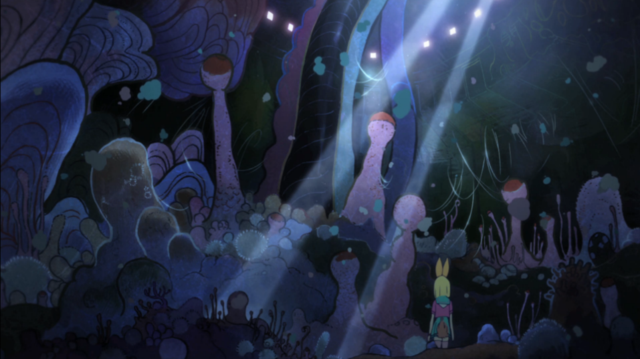 Pure Input introduces Cocona as an a young girl who is as distant from Individuation as one can be. She is as profoundly unhappy as she is out of touch with her own identity. She struggles with her school applications because she has no concept of her own skills or desires which she wishes to pursue. The loss of her parents has left her with a fear of forming intimate connections with others, causing her to push away Yayaka’s friendly overtures. She is cynical and embarrassed displaying even her brief moments of happiness in front of others. Cocona’s Persona is one which recoils from the world and lacks any concept of her Self, driven by avoidance of pain instead of pursuit of fulfillment, which in itself leaves her unsatisfied. 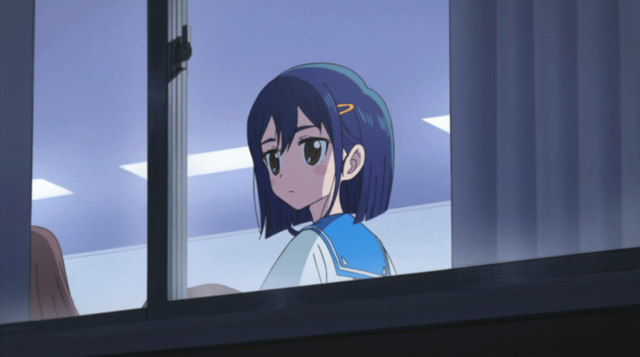 Papika is the polar opposite of Cocona, occupied only with her pursuit of pleasure. She has a strong sense of identity that allows her to instantly determine her wants without the need for self reflection and pursue her own happiness. What she lacks in intellectual intelligence she more than makes up for in emotional intelligence. Her Persona and her Self are essentially one and the same and both are completely actualized. She is a completely Individuated personality whose emotional pursuit of Cocona has a preternatural quality, as if Papika can sense the identity within Cocona that not even she herself is able to define and recognizes it as something which will provide them both fulfillment. Her infectious enthusiasm poses a direct challenge to Cocona's avoidant personality, gradually directly Cocona to define her own boundaries and become more genuine about her feelings. Unable to retreat from Papika's pursuit of friendship, Cocona is forced to directly confront emotional intimacy and ultimately recognize the value of their connection. 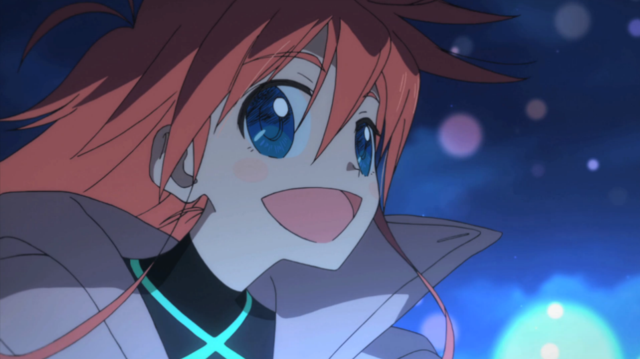 Jung's Shadow represent primal drives, which can be both positive and negative, but are rejected by the conscious. Sexual urges are typically considered positive but may nonetheless be rejected due to fear, misunderstanding, or shame. We see Cocona as extremely uncomfortable when presented with sexual themes. In Pure Input she shoves Papika away from her at each attempt at an embrace. In Pure Converter in which she instinctively rejects the desire for oral stimulation brought on by the worlds form. Papika is a creature of instinct, fully in touch with and unashamed of the desires of her shadow and is able to unabashedly indulge her every desire. In Pure Converter she freely chewed every item that appeared enticing. Almost animalistically, she experiences none of the reservations associated with nudity or intimate contact and so pursues whatever actions she believes will make her happy. Once again, Papika's open acceptance of the taboo forces Cocona to reassess her beliefs and test her comfort zone. There is an undenying element of sexual discovery in both Pure Illusion and the girls interactions. 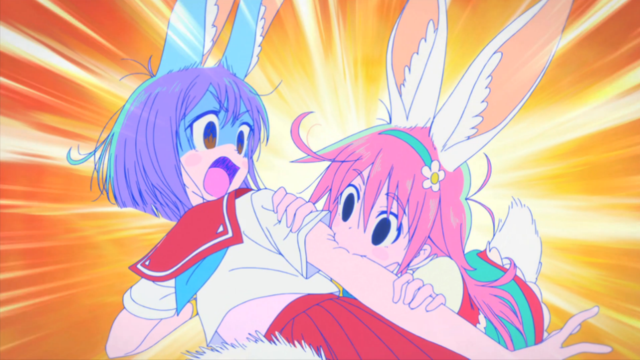 The Queen of Masks in Pure XLR is doubtless a manifestation of the negative urges of The Shadow, which Jung believed was the archetype most likely to appear directly in dream as a dark figure of the same gender. Spot on appearance aside, her character resonates with destructive urges, taking pleasure in pain and dominating others through her sexuality and violence. If she was speaking the truth, the mask she put on Cocona drew out the dark desires of her own Shadow which caused her victimize others and attack Papika. Cocona frequent frustration with Papika’s sometime ill-considered behavior may have caused her to harbor resentment which expressed itself in her attack. “Did punching Papika make you feel better?” The Queen's most devious manipulation was tempting Cocona with the prospect of filling her emptiness and providing her with a role to define herself with, circumventing the pain and struggle of her personal development. Ultimately Cocona is able to positively channel her dark urges by using violence in self defense to defeat the Queen of Masks. By later apologizing to Papika for what she had done, Cocona makes another stride toward her real self by taking ownership of her feelings accepting responsibility for her actions. 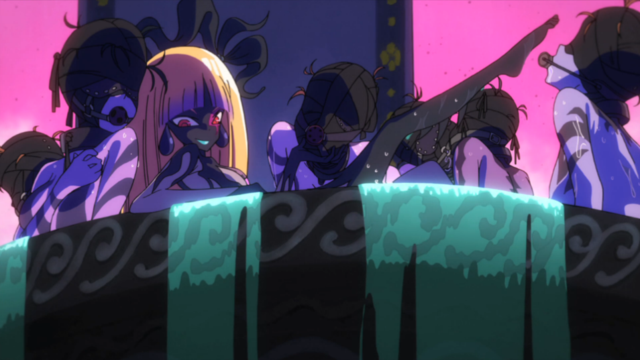 Pure Illusion acts as the medium through which the girls bond and pursue Cocona’s self-actualization. Whatever magical or scientific method Flip Flap employs to send the girls to this dreamlike collection of fantastical worlds, it is very likely that they have found a way to tap into Jung’s Collective Unconscious, the raw material from which the psyche of all of humanity is drawn, inhabited by totemic archetypes of personality. This alternate universe was ingeniously designed by Oshiyama, employing imagery and tropes from art and film to give the most foreign landscapes a feeling of familiarity. A place you don’t recognize but know you’ve been before. 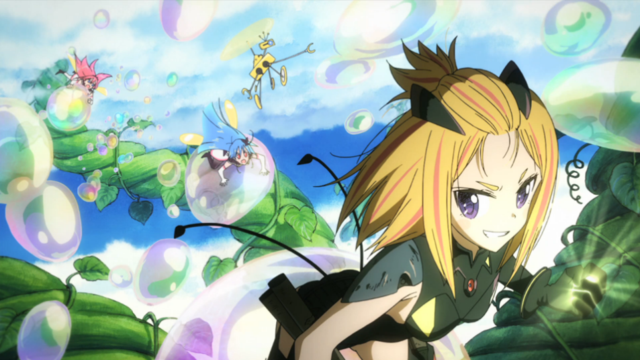 This explanation provides context for many of the unusual aspects of Pure Illusion. Their accidental encounter with the childhood memories of their senpai Iroha in Pure Play and subsequent resolution of their classmates regrets regarding her final interactions with her beloved Aunt indicate the Pure Illusion exists as a liminal world where the thoughts and feelings of others can be accessed. The oven-like device the girls enter to travel to Pure Illusion could be nothing more than a means of sensory deprivation, which has classically been used to stimulate hallucinatory, dreamlike states and bring the unconscious forth with no external reality to occupy the mind. Interpretation of dreams were a pillar of Jung's analytical psychology as a bridge for the unconscious to communicate its desires to the conscious mind just as sleep is the connection between the individual and the Collective Unconscious. By exploring Pure Illusion, the girls confront the manifestations of dreams and therefore communicate directly with their own subconcious. 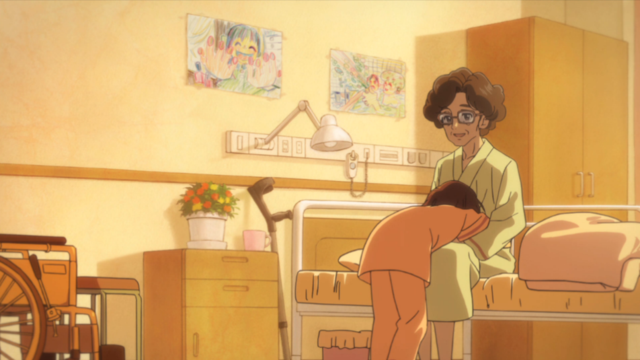 In a Jungian reality composed of human thought, the most-self actualized individual would have the strongest connection to the totemic power of the archetypes that reside therein. Pure Illusion provides an elegant explanaton for Cocona's development and the girl's growing bond to equate directly to her fighting prowess. Their transformation, the ability that seems unique to Cocona and Papika, may be the manifestation of the Syzygy, a holy union of the oppositional forces of Anima and Animus, and an archetypal force within the Collective Unconscious. This is Flip Flap’s ace-in-the-hole, a way to “cheat” the system by finding a compatible pair who can harmonize their oppositional natures and draw power from one another, evident in the nature of their transformation, in which each adopts the hair color of the other and the passive Cocona wields a sword while the aggressive Papika uses a shield. 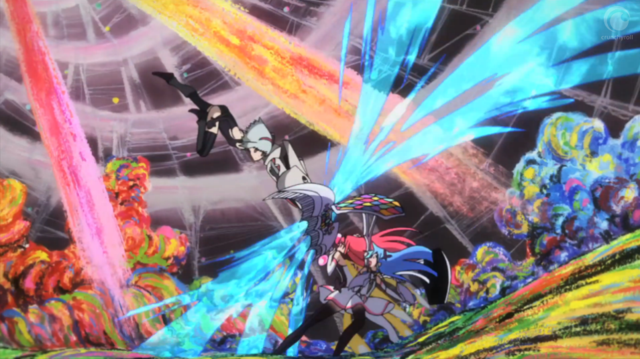 From her embarrassment at even momentarily displaying enjoyment frolicking in the snow in Pure Input, Cocona is able to admit she enjoys her adventures into Pure Illusion with Papika. Where she initially shunned physical contact with Papika, Cocona is not only able to accept Papika’s touch but find comfort in it, even seeking it out for mutual support. Emotionally she has progressed from universal uncertainty to openly expressing and sharing mutual affection and trust with Papika as well as determining, if Amorphous do have the power to grant wishes, precisely what she would desire. Through the magic of Pure Illusion, Cocona has begun to integrate the aspects of her identity to a functional whole and begin her path toward Individuation. Removed from the fantastical trappings and flappings of FLIP FLAPPERS, Cocona’s journey is a discovery of herself. 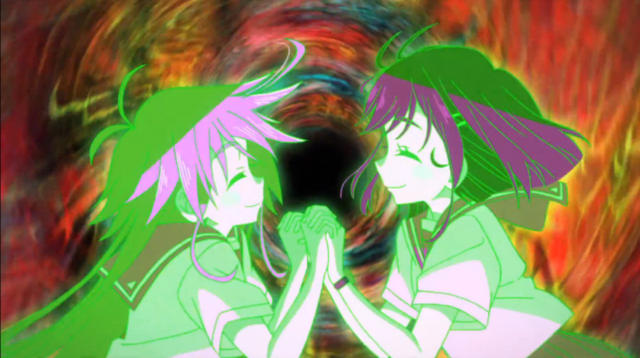