Check out the real-world locations of Flip Flappers, WWW.WAGNARIA!!, and more! 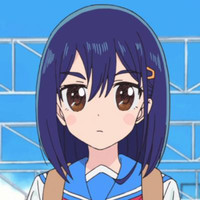 The fall anime season is finally wrapping up and the winter season is about to begin – but before that happens, I’d still like to take a quick look back at all the shows I watched, but did not cover in my column this season. I’ll go through these shows alphabetically, so let’s get right to it!

First up, my New Year’s resolution Anime De Training! Xx! The show follows around six aspiring idols as they lead the viewer through various exercises and training methods, while directly talking to the viewer. So instead of heading to the gym first thing in the new year, why not start your rewatch of Anime De Training? Simply follow the girls’ instructions and partake in the exercises, or head out for a run through the Nakai shopping area in the Shinjuku ward, like the girls did in episode seven. This is actually not the first time this street, and this sign in particular, have appeared in anime. Mamoru Hosoda’s The Girl Who Leapt Through Time already made use of the location before.

Like in the first season of Bungo Stray Dogs, the Armed Detective Agency, consisting almost entirely of members with supernatural abilities, investigates and solves crimes and incidents in an alternate version of Yokohama. We don’t get to see as much of Yokohama as we did in the first season, but there are a couple of new locations here and there sprinkled throughout the show. The Armed Detective Agency and the Port Mafia have their first encounter with the Guild in the Yamashita Park, along Yokohama Bay. The park has also been shown in a couple of shows like Flying Witch and Oreimo.

The American Guild organization makes their grand entrance in front of the Park’s ‘Water Guardian’ statue, which was a gift from Yokohama’s sister city, San Diego.

Oda, Gide, and Akutagawa have their face-off in front of the Yokohama Museum of Art, during the first four excellent flashback episodes. The tall tower in the back is the 296.3m (972 ft) high Yokohama Landmark Tower. I highly recommend the tower’s observation deck.

In the seventh episode of Flip Flappers, Cocona ends up in a Pure Illusion somewhat similar to her own world, whose scenes were based on locations from Koriyama and Motomiya, in Fukushima Prefecture. The intersection above is located near Koriyama Station.

Cocona is sitting on the Abukuma River bank here.

Unlike its predecessor, which was set in Shinjuku, Lostorage incited WIXOSS takes place in Ikebukuro. Ikebukuro is a popular entertainment and commercial district in the northwest of Tokyo, and is also known as a center for otaku culture. The setting should be especially familiar to Durarara fans.

The anime’s Donny’s is actually a Denny’s in real life.

My Wife is the Student Council President+!

I only watched this show because of the real-life locations, I swear! In any case, I’m not here to talk about the show’s plot, but about the its real-world setting. And after watching all 24 episodes, while assuredly only paying attention to the show’s setting and backgrounds, I can confidently say – I still don’t really know. The only identifiable and tangible locations we got to see were shown during the show’s ending theme. The image above shows the view from Mount Hakodate, overlooking the peninsula on which the city Hakodate (Hokkaido Prefecture) is located. The view from the 334 meter high mountain is renowned as of the best night views in Japan, and has also been shown in other anime like ERASED.

Let’s move on to another short from this season, Nazotokine. Most of the time, our heroine Tokine is trapped in the not-so fantastic puzzle dimension called Quizn, but during the rare moments she’s not, the show actually takes place in Tachikawa, located in the western part of the Tokyo Metropolis. The image above shows Tachikawa Station.

I don’t think anybody was able to not notice the setting of Poco’s Udon World, as the anime itself was basically a huge advertisement for the Kagawa Prefecture. Kagawa is Japan’s smallest prefecture, and is one of the four Prefectures located on the island of Shikoku, and as you might have picked up from the anime, Kagawa is very well-known for its udon noodles, granting the prefecture its very fitting nickname: The Udon Prefecture. I had the chance to try some udon in Kagawa myself last summer, and let me just tell you, the prefecture really deserves its nickname. The image above shows the Great Seto Bridge, which is actually a series of bridges connecting Japan’s main island Honshu to Shikoku. The total length of the bridge is 13.1 km (8.1 miles) and it spans across five smaller islands.

I took this photo while crossing the bridge, the view really was quite spectacular.

The Chikiri Shrine in Takamatsu.

The show incorporates various attractions of Kagawa and its prefectural capital, Takamatsu. One of which is the world’s first glass lighthouse.

Another famous tourist location featured in the show is Shodoshima’s Angel Road. A beautiful sandbar only walkable twice a day during low tide, extremely popular among couples.

Last but not least, WWW.WAGNARIA!!. Like the show’s spin-off Wagnaria!!, the setting is again Hokkaido’s capital, Sapporo. Since the show almost entirely takes place at our cast’s workplace, we rarely get to see anything of Japan’s fourth largest city. One of the few sights we got to see from Sapporo was the Hokkaido Shrine in the fourth episode of the show.

By the time this post will go up, it’ll already be 2017 where I live, but I’d still like to wish all Crunchyroll users a Happy New Year! Which were your favorite real-world anime locations from this past season? Leave a comment!