FEATURE: Manga vs Anime - The Art and Animation in "Fuuka"

How does the Fuuka anime compare to the manga? 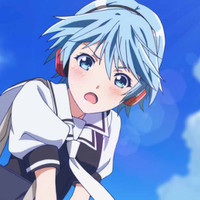 Watching the first episode of the Fuuka anime made me realize how good the manga is at what it does. Fuuka is very much a typical teenage romance manga, complete with tsundere antics and a panty shot in the opening pages, but there’s also something irresistibly readable about it. In large part, this is due to the manga’s visual execution. Kouji Seo may be a controversial manga artist because of the often frustrating relationships he depicts in his stories, but he also knows how to capture a teenage boy’s viewpoint through his art. In the Fuuka manga, our hero’s confidence issues seep through his body language in every panel. 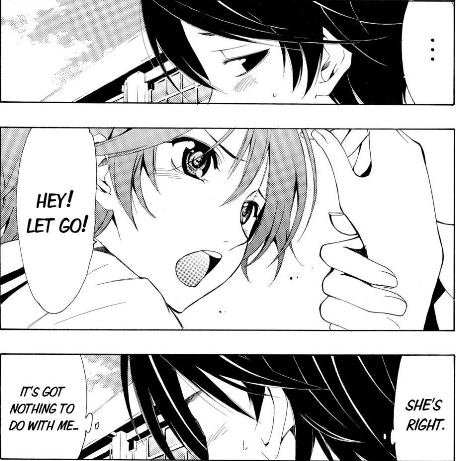 Watching the anime, however, has been quite a different experience so far. The first thing I noticed about it was its overall aesthetic. The colors clash with each other, and the 3D backgrounds have an oddly prosthetic and clinical look about them that doesn’t mesh well with the character animation. The production flaws are understandable, considering that the anime’s art director and color coordinator are both first-timers in these roles. Studio Diomedéa has also struggled to finish major projects on time lately, particularly the recent KanColle movie, and Fuuka was almost certainly a victim of a rushed schedule (sadly the norm for TV anime). The external factors were clearly not in the anime’s favor.

Despite all of this, however, I do believe that the Fuuka anime is trying to create a distinct visual identity for itself and attempting to bring the themes of the manga to life in a way that only animation can. For example, the opening scene of episode 1 is awash with a warm orange tinge, and this is perhaps used to signify the summer sunlight (Fuuka’s name means “summer wind”). When Fuuka jumps into the scene for the first time, everything turns quiet, drawing the viewer’s attention to the girl’s slightest movements. 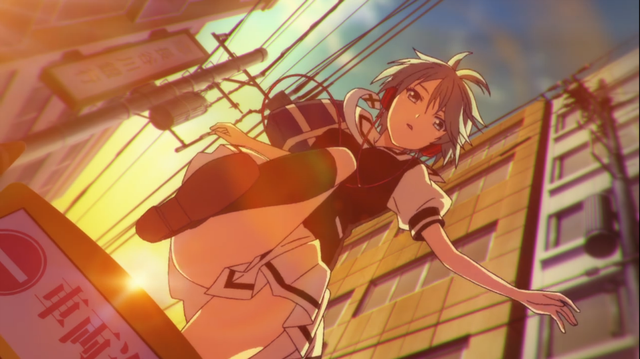 I really like the idea behind this shot, but I also have to say that Fuuka’s appearance is more striking in the manga. In the corresponding manga page, Seo omits the backgrounds, focusing instead on the colors and shadows. There is no orange tinge; the summer light is clear and transparent. This ends up working really well as an aesthetic choice, because Fuuka’s blue eyes and hair stand out prominently against the shadows. You get the immediate impression that Fuuka has a forceful personality, and that she is akin to “the summer wind." 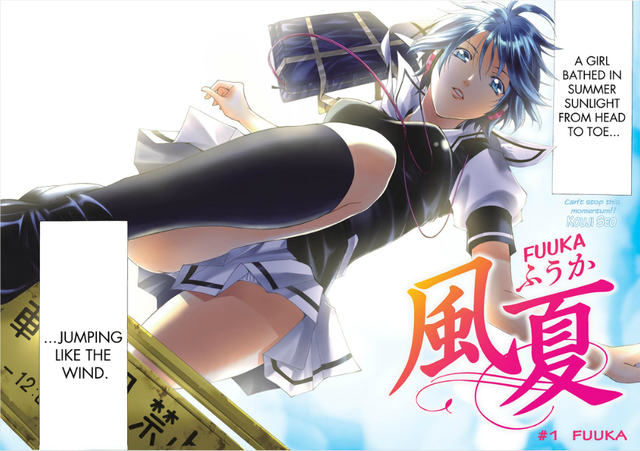 The anime has some other unusual visual choices that aren’t present in the manga proper. The anime uses heavy filters at times in order to match the shiny look of the manga volume covers. It can go a bit overboard at times, though, especially in the OP, but it's also the anime at its most visually interesting. It replicates the look of a concert, which I think is what the anime was going for. 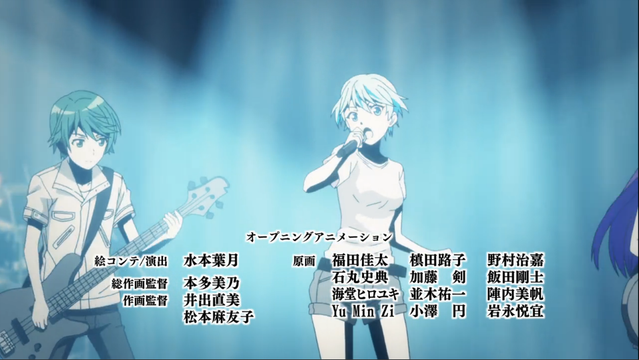 But when it comes to unusual stylistic choices, the layouts have to take the cake. At times, the camera cuts to a birds-eye view. Look at this shot of the MC walking around inside his house, for instance. This kind of thing isn't unprecedented in anime; Studio Lerche shows have been using this kind of shot too lately. It's not present in the manga at all and is a really interesting way to show the girls in a state of undress without overtly sexualizing them. But the application here is strange because the guy looks like a cardboard cutout and doesn’t integrate with the layout of the scene at all. 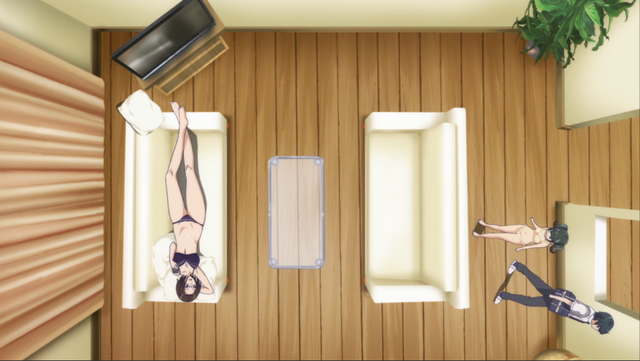 These layouts really puzzled me because episode 1 was storyboarded by the series director himself - and if any episode’s layouts should be indicative of the director’s overall vision, it should be this one. There’s also a person credited specifically for supervising the layouts, which is unusual for TV anime but fairly standard practice among Studio Diomedéa projects. The same person (Kenji Masuda) worked in this capacity for Girlish Number and Gingitsune: Messenger Fox of the Gods, to name a few. So it may be the case that director Keizou Kusakawa was trying to spice up the anime with these unconventional layouts, but failed to make it work because of lack of time or whatever reason. This makes me curious about how Fuuka would have looked given more ideal circumstances. It actually does have the makings of a really special and unique-looking anime.

One possible hint of Fuuka's ideal form comes in the form of Kusakawa’s earlier TV anime project, Riddle Story of Devil. That anime has a similar garish look about it, but it fits the manic nature of the story better. For that anime, Kusakawa teamed up with director of photography Yasuyuki Itou, who has handled the photography of every Diomedéa project since Problem Children are Coming from Another World, aren't they?, so clearly they’re capable of making some good work together.

So why do these same techniques in Fuuka make such a different impression on me? Here's what I think. In Fuuka, the lack of consistency between the characters and backgrounds makes the world of the anime feel ungrounded in reality, which doesn’t make sense for the down-to-earth high school romance that Fuuka is trying to be. It's a departure from Kusakawa's usual style. 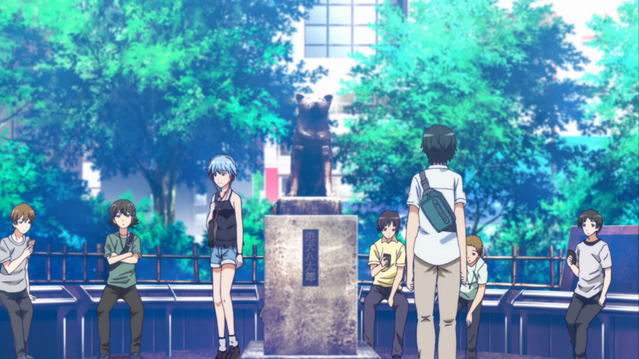 All in all, the anime is an interesting though flawed adaptation of the Fuuka story. If you're watching the anime, I do recommend you read the manga as well to get a different interpretation of the story. Besides all the unusual visual choices, the anime also rearranges the events in the story. For example, in the manga, Fuuka immediately helps find Yuu’s cell phone after the scene on the roof, and she also greets Yuu cheerfully when they first realize they're in the same class. In the anime, she seems somewhat grumpier, more like a typical tsundere than a carefree girl who acts according to her whims. Her voice in the anime is definitely cute, though, and is my favorite thing about the anime.

I hope this article managed to pique your interest in some of the more subtle differences between an anime and manga. You can read the Fuuka manga on Crunchyroll.

What do you think of the Fuuka anime and manga?