A closer look at Japan's favorite anime of the Winter 2017 season! 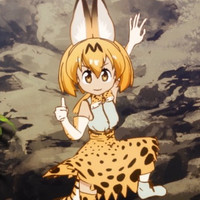 I did not plan to watch Kemono Friends when this season started. To be more accurate, I didn't even know Kemono Friends was an anime that I could be watching. Having trimmed my simulcast watching schedule to a few hopeful new shows and a sequel or two ahead of the season's start, I wasn't even paying enough attention to the announcements or the upcoming anime charts to know that what would become the Japanese anime fandom's biggest anime of Winter 2017—a moe animal girls show based off of a defunct mobile game rendered in exceedingly poor CG—even existed. But here we are. A week ago, it was reported that the first episode of Kemono Friends had surpassed 1.2 million views on popular Japanese streaming site Nico Nico Douga. When I checked the count shortly before this post went live, that number had swollen to over 2 million.

In the English speaking fandom, Kemono Friends has had a much more muted impact—but with even the official Crunchyroll Twitter account professing its love for the show, viral Japanese fanart crossing language barriers, and the small group of devoted Kemono Friends followers (Kemono Friends friends, you might call them) slowly growing in number, it seems the show may be destined for higher mountains than just the one where the Japari Cafe is located.

For those who have only heard about Kemono Friends via hearsay—or who haven't heard about it at all—the fuss about this show may be quite mystifying. And, to some extent, the confusion is justified, because on the surface Kemono Friends doesn't have a lot to recommend it besides some very pretty backgrounds. But, having seen the first three episodes of the show, my impression of Kemono Friends is that the secret to its charm is not necessarily what we see on the surface (although that's definitely part of it), but what we don't see. And it's what we don't see and what not seeing it does to us that makes watching Kemono Friends such a strangely engrossing experience. 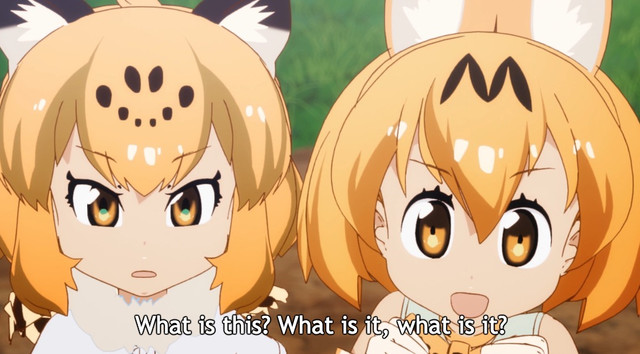 But first, a quick introduction to Kemono Friends for those of you yet uninitiated! The basic premise of the show is that a young girl finds herself in the middle of a savanna with no knowledge of who she is. She soon after encounters an anthropomorphized Serval cat, who inquires about what kind of animal the young girl is. Upon learning that the girl knows neither her name nor identity, Serval dubs her Bag-chan (after the backpack she carries), tells her that they are in a large area called Japari Park, and proposes they journey to the park's library to figure out what kind of animal Bag-chan is. Thus the adventure begins!

With this knowledge in hand, we can now turn our attention to describing the experience of watching the season's biggest sleeper hit. Although the plot summary above promises excitement in the form of adventure, Kemono Friends has more in common with the slice-of-life episodes of Dog Days (another anime featuring a bunch of cute girls with animal ears and tails) than it does with Fullmetal Alchemist. Aside from a short encounter with a mysterious monster called a Cerulean in the premiere, the majority of the show's runtime thus far has been spent dealing with the small problems that arise during Bag-chan and Serval's journey. Along with the Friends they meet along the way, they overcome challenges like crossing a river, charging a battery, and making a mountaintop cafe more visible to flying visitors. 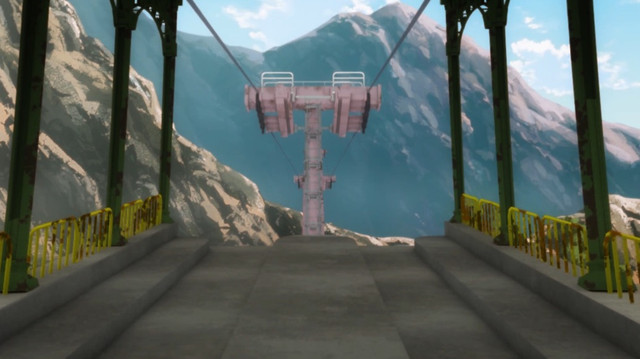 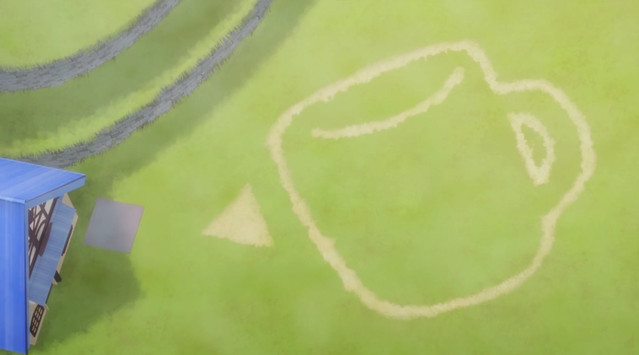 As far as the characters go, nearly all of their (very simplistic) dialogue is focused on their immediate situations (as is fitting for a cast of animals), with only the inventive and curious Bag-chan occasionally asking questions that go beyond basic engagement with the current Friend or problem. And, as they are the lenses through which we the audience experience Japari park, the characters' focus becomes our focus. It's a common device that many such shows utilize to direct audience investment—for example, Nick Creamer's latest article on Miss Kobayashi's Dragon Maid explains how it's the everday concerns of its characters that define the show's focus—but in Kemono Friends this technique has another effect as well.

Despite the fact that the characters are mostly concerned only with what's in front of them, there are hints here and there that something else lurks beneath the peaceful exterior of Japari Park. The presence of the Ceruleans, the hints dropped that the anthropomorphized Friends used to be just regular animals, the existence of Japari Park's areas and their diverse climates, and the presence of rundown signs and vehicles seem like they should be pointing to some kind of unusual past for the park, but Bag-chan and her companions are far too busy naively ooing and aahing at what they encounter on their adventure to pay much heed to such things. For them, these details are merely interesting facts of their universe—but for those of us who live outside of it, they stand out in contrast to the moe slice-of-life stylings of the Friends' meandering adventures.

The cumulative effect of this dichotomy between the anime's focal point (the Friends' adventures) and the unacknowledged but ever-present specter of its unexamined setting is a rather curious one. 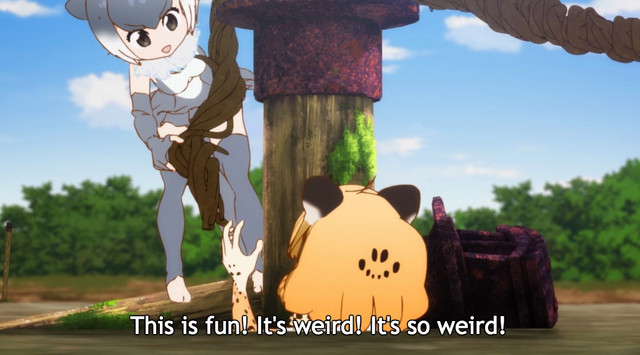 When learning how to draw, new artists are often taught about a concept called "negative space," a term which refers to the space around and between the defined physical presence of the image's subject. For example, let's say you're drawing a coffee pot. The negative space in the image might be the air between the spout and the body of the pot, or the circular gap you can see through the pot's handle. In drawing classes, negative space is often used by teachers as a way of breaking down students' preconceived perceptions of how the object they're drawing is; by drawing the negative space, which they don't consciously recognize, they end up creating the actual object. Negative space is powerful because it implies and defines the meaning of the object—although what that meaning really is isn't always clear, as the famous optical illusion known as Rubin's Vase (two faces or a vase?) demonstrates.

My viewing of first three episodes of Kemono Friends left me with a feeling similar to that of viewing Rubin's Vase. The show—not just visually, but in terms of overall content—is defined as much by the "negative space" within it, the gaps of seeming nothingness as anything else. In a post documenting the response to the show on Japanese social media, some of the wild theories that are being developed about it, and the role of social media in making the show a hit, one blogger even proposed that its script might be called "contentless," a description I feel is apt given the comfortable non-conflicts that make up each episode's story. It's all just so remarkably unremarkable that you can't help but notice all the nothing that's happening. 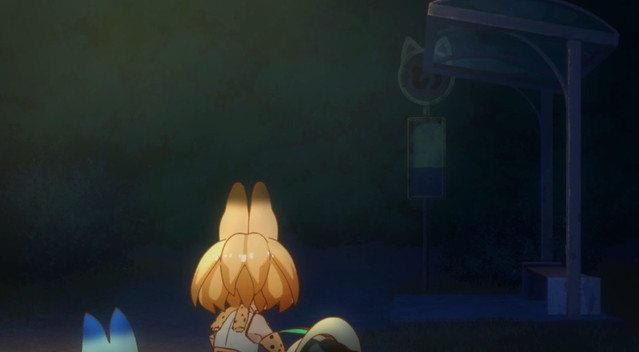 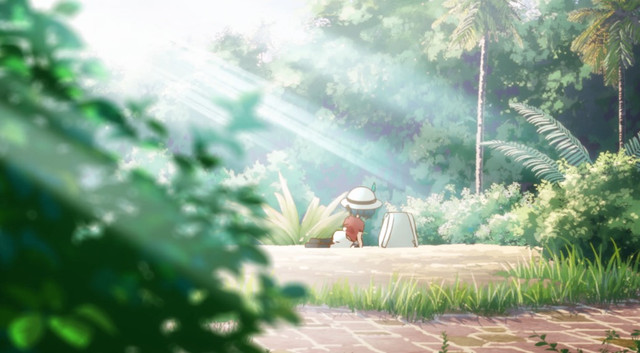 But what's left in all that space between the uneventful proceedings of the plot is room for a feeling of discomfort and uncertainty to grow. Because so little occupies so much of Kemono Friends, the feeling that there must be more persists. There's probably a good case that such a "more" doesn't exist within the show, but at the same time that the logical brain recognizes there's nothing more to the show than a bunch of CG anime girls with ears talking endlessly about how "fun!" and "interesting!" everything is, a mention of something taken for granted by the show's characters but unexplained to the audience or a shot that seems to warn that something out there is watching our dear Friends on their adventures reignites the feeling that the negative space isn't completely empty. Or, rather, it demands that we fill it with meaning. And it doesn't matter whether Kemono Friends intends any of this or not; the mere presence (or non-presence) of these elements is enough.

The philosopher in me supposes all this might speak of some deep truth about humanity. About an innate need to create meaning out of the things we encounter, just as Serval and the other Friends seek to understand and make sense of their meetings with the creations of mankind. About how the negative space of existence implies with inexorable force upon us that it all has to mean something. Maybe our fascination with this seemingly inane and shoddily produced anime is an indicator of a deep human desire for substance in an ephemeral world. Just as Bag-chan seeks meaning by searching for the kind of animal she is, so we too search for meaning in Kemono Friends. Maybe we need to find out what kind of animal we are.

Or maybe we've all just got a little too much time on our hands. Have too much on yours? Give Kemono Friends a try. 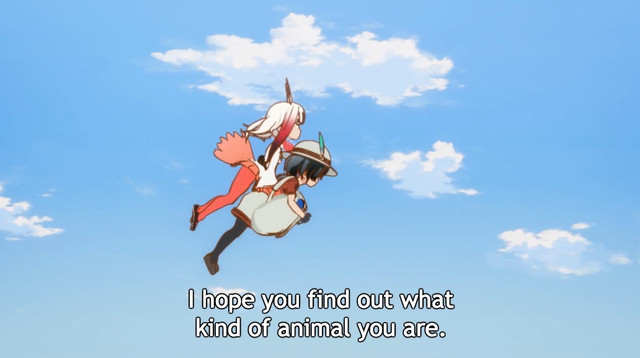