Last week was Spanish omelette, so, in keeping with the Spanish theme, this week is Sangria! And a giveaway?!!? (Drink responsibly!) 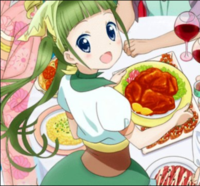 Howdy everyone! I come to you as a new woman! Spring has sprung here in California (mostly), I've just signed a lease for my own apartment next year (on my own!!! So exciting!!), and I finally bought an onigiri mold for any onigiri dreams I wish to fulfil moving forward in life.

Best of all, I found this anime, Piacevole, which I've seen pictures from for the past couple of weeks. It took me absolutely too long to realize it was from a show we have here on Crunchyroll, so when I made this startling discovery, I threw myself into it wholeheartedly. The show is about a girl who gets a part-time job at an Italian trattoria, and she knows nothing about Italian food. Thus commences her daily life at work in the restaurant. It's a simple show- nothing too fancy or contrived. It's your basic slice-of-life at a restaurant, but each episode is only 4-5 minutes, just enough to give you a taste of this girl's life without pounding the mundanities into your brain until your eyes start to bleed (No? Does that only happen to me? Awkward.).

The show is cute, and light-hearted, but actually some of the food, like the sangria we're making today is from a culture other than Italian. So, in terms of accuracy and calling it an Italian trattoria...it's not exactly right, but I also don't think that's too much of a problem. When cultures intermingle, traditional food recipes are one of the first and best things to get twisted around. This definitely comes into play here when they feature a "fried spring roll caponata", which actually sounds amazing. A caponata is a kind of sweet and sour vegetable dish, and so the recipe in the anime puts that mixture into a spring roll, making an awesome fusion of Chinese and Italian cuisine!

I'm seriously thinking about doing other recipes from this show, but I'm focusing on sangria this week, because I think we need a toast! I recently hit 500 subscribers on YouTube, which is weird and cool! I also thought that it would be nice to keep with the Spanish theme, since I did Spanish Omelette last week. The sangria featured here follows a typical recipe with an unusual addition: In the anime, they used some whole, fresh rosemary to flavor the drink, which I'd never seen before. I decided to give it a try, and was really pleasantly surprised by the addition the rosemary gave to the wine/brandy/orange juice mixture. It elevated it to something a little more refined than typical sangria, a little more nuances, and I think this version would actually pair very nicely with steak. Best of all, sangria is easy to make! For best results, let sit together for a few hours before serving, but you can also just go for it right as soon as you're done making it! Like I did...and kept doing...until the whole thing was gone... 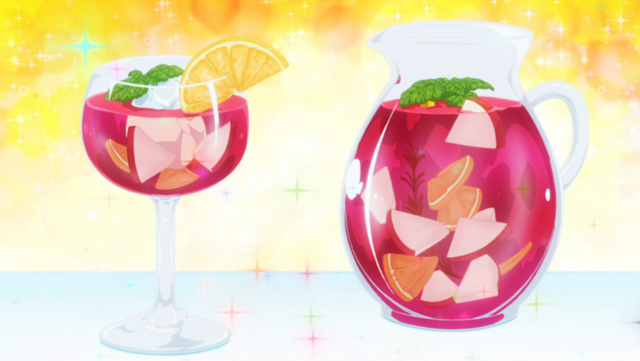 Anyway, I mentioned I'm doing a giveaway! This is not affiliated with Crunchyroll, it's just something I'm doing for the people who watch my YouTube videos as a thanks for so many subs! I placed in a bento box making competition a couple of years ago, and they sent me baout 20 bento boxes, among other things, as a prize. I really, really don't need 20 bento boxes, so I wanted to share some with you guys so that you can try making delicious food for yourself in cute boxes! And the Sand de Panda is just an absolute CLASSIC sandwich making item, so if you're not into boxed lunches you can have fun playing with that.

1. Muddle apple and orange pieces in your pitcher/ vase.

2. Add rosemary sprig and muddle again, until rosemary is fragrant.

4. Add red wine and stir everything together. 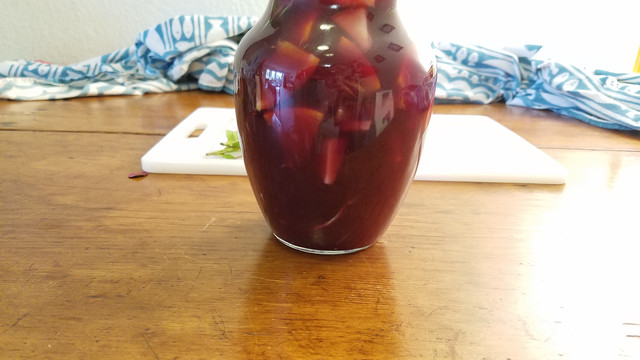 5. Allow to sit in the fridge for a few hours for more alcoholic fruit pieces, or you can serve immediately over ice. 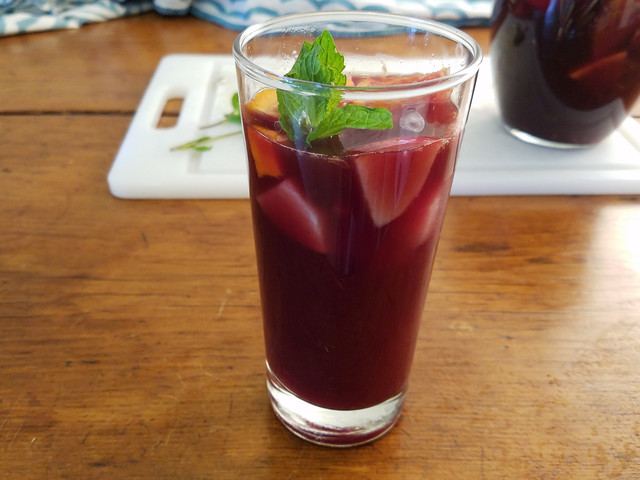 I hope you enjoyed this post! Check in next week for another recipe. To check out more anime food recipes, visit my blog for more anime and manga themed food. If you have any questions or comments, leave them below! I recently got a twitter, so you can follow me at @yumpenguinsnack if you would like, and DEFINITELY feel free to send me food requests! My tumblr is yumpenguinsnacks.tumblr.com. Find me on Youtube for more video tutorials! Enjoy the food, and if you decide to recreate this dish, show me pics! :D
In case you missed it, check out our last dish: Spanish Omelette from "Seiren". What other famous anime dishes would you like to see Emily make on COOKING WITH ANIME?
Tags
piacevole, cooking with anime, sangria
« Previous Post
The Gang's All Here In "Hinako Note" Key Visual
Next Post »
School is Ghoulish in "Youkai Apart no Yuuga na Nichijou" TV Anime
Other Top News
2 Comments
Sort by: