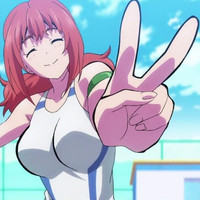 You know the sports anime formula. Plucky kid tries a new thing for the first time and immediately falls in love with it. He joins his school’s club, only to discover that it’s nowhere near the powerhouse it used to be. In a grueling training arc, he develops camaraderie with his teammates, and together they work to beat their rival school and realize their dream of going to Koushien. 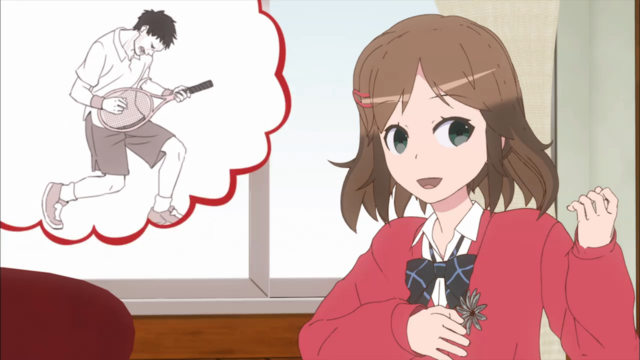 Put the director of a beloved anime in charge of an anime about table tennis, and what do you get? That’s right, we’re talking Scorching Ping Pong Girls. Yes, Fullmetal Alchemist: Brotherhood director Yasuhiro Irie went on to make an extremely thirsty ping pong anime. Oh, and I guess Masaaki Yuasa’s Ping Pong: The Animation is a pretty good coming-of-age story too.

I don’t think there’s much debate on the status of horse racing considering equestrian’s presence in the Olympics. Still, it’s not often you see anime about it. A while back, the Japan Racing Association sponsored a special episode of Mr. Osomatsu that was exactly what you’d expect from a JRA episode of Mr. Osomatsu: completely cursed. Maybe we’d better bank on the horse girl anime slated for next year. 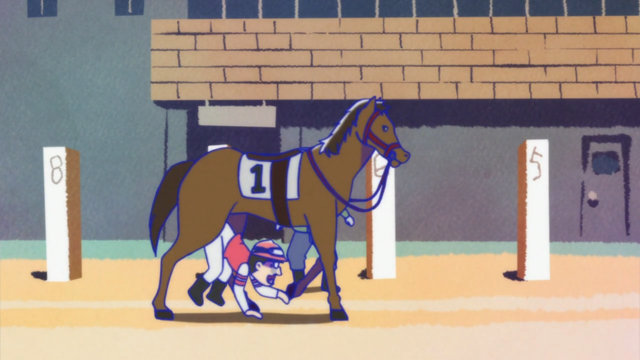 Frankly, I had no idea motorcycle sidecar racing was a thing until TWOCAR came along. Turns out the sport is pretty ridiculous. Take single-rider motorcycle racing, add a squirming passenger, and you get this bonkers sport where rider and passenger work together to make sharp turns as efficiently as possible. It’s about as risky as it sounds; people have legit died attempting this stuff. May the anime girls keep their pigtails far away from the wheels, I say.

If the contents of my Twitter feed are any indication, pro wrestling is silly, badass, and most of all, extremely anime. As far as I’m concerned, anime and wrestling are about on par with each other as sources of reaction gifs. And really, why else does anyone watch anime? For 100% serious no-fun-allowed “good” storytelling? Nah, sounds fake.

Anime: Tiger Mask W, Kick-Heart, we do not speak of Wanna be the Strongest in the World 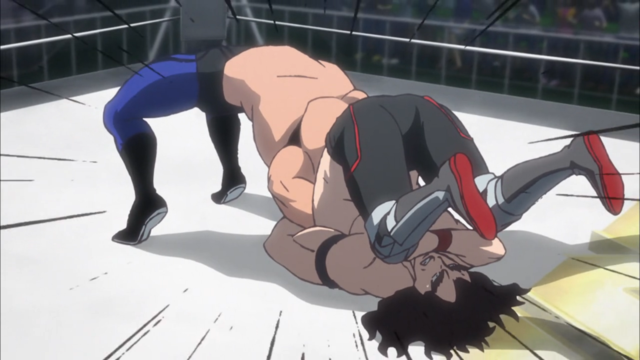 You want an outrageously popular anime about cute boys on knife shoes facing off against each other? Boy, do I have the anime for you! King of Prism is hardly an accurate depiction of figure skating, but it does the “plucky protagonist joins a school club” sports anime formula more faithfully than any other skating anime out there, so what the hey, we’ll call it a sports anime. Besides, if Prince of Tennis could cause the dinosaur extinction, why can’t a figure skating anime include dragons and tornadoes?

Who’s to say ballroom isn’t a real sport? It’s sweaty and draining, and on top of that, you have to pretend you’re not dying even when you most definitely are. Although on the surface it looks like a world of frilly gowns and glitter, ballroom requires an absurd degree of athleticism and team trust. It’s a sport.

Anime: Welcome to the Ballroom 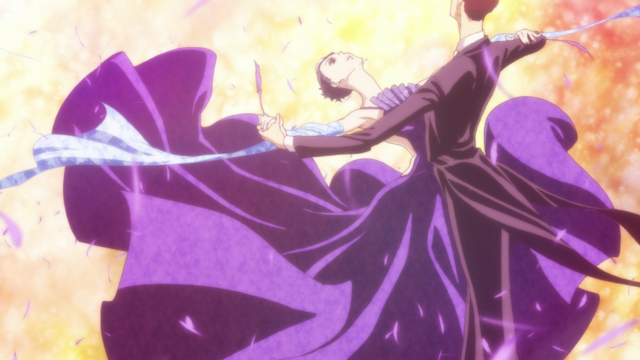 Put aside the image of girls in short skirts and think about the acrobatics involved in cheerleading. It’s a sport that requires everyone to trust that nobody will drop them on their heads. Cheer teams have to be tight, just the same as in any other team sport. This is where real friendship is born.

The Japanese card game karuta probably isn’t the first thing you’d describe as a sport. The game’s objective is simple: a speaker reads one half of a well-known poem, and the players look for the card with its second half. Just memorizing poems like you do in lit class, right? Not when you get good at it. At the upper levels of karuta, the game becomes a contest of reflexes and agility as players take any split-second advantage they can find. 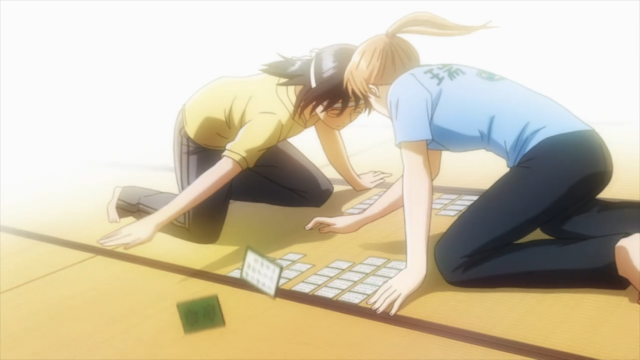 While it’s not technically called such in-show, the extreme sport depicted in Prince of Stride is about as close as you’ll get to parkour in anime. Competitors participate in a relay race through an urban obstacle course, leaping over walls and traversing complicated routes. Next thing you know, they’ll be Naruto running through shopping malls. It’s pretty great.

This far down the list, we’re getting into some pretty questionable fictional sports. Keijo!!!!!!!! is a sports anime about what’s basically wrestling with butts and boobs. At one point, a character summons the powers of a thousand derrieres with the Gate of Bootylon, which is about all you need to know if you’ll like the show or not. There’s some real rip-roarin’ fun to be had here, I’m tellin’ ya. 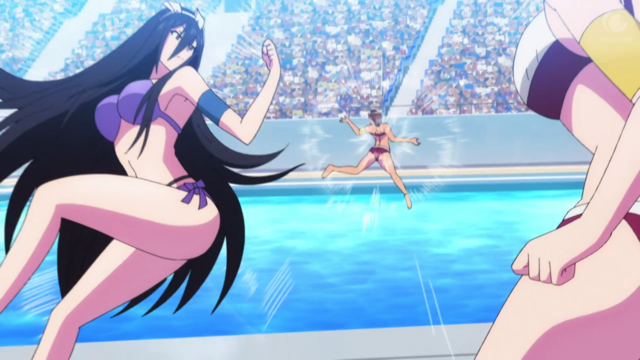 Do you like cute anime girls? Do you like military hardware? Do you like the sports anime formula? If you answered yes to any of those questions, GaruPan is for you. There’s nothing quite so fun as watching armored tanks shoot the crap out of each other, it turns out. Have I mentioned I love anime?

Not a fan of tanks? Why not plastic models! Live your childhood fantasies of your toy robots punching each other out with Gundam Build Fighters. That’s right, Gundam is so heavily merchandised there’s now merchandise for its merchandise. How great is that? If you want some cute anime girls go with your toy battles, try Frame Arms Girl as well. 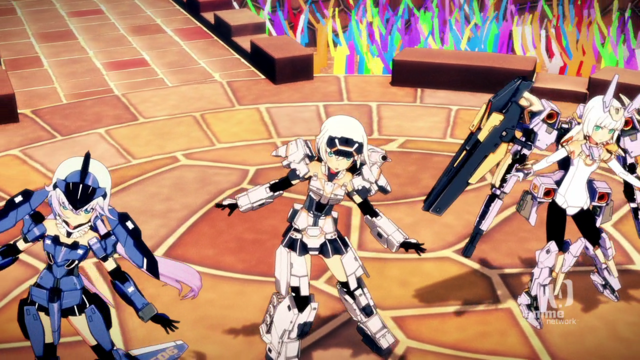 Maybe you were that kid in high school who didn’t play sports, but dedicated all their time to the robotics club. Worry not, anime’s got you covered. While Gunpla and tanks as sport might require a stretch of the imagination, Robomasters is an actual event that’s been popular in China lately. If equipping drones with random features sounds fun to you, you might like RoboMasters the Animation - provided you can speak either Japanese or Mandarin, since it hasn’t been licensed anywhere.

Okay, maybe you were even nerdier than the robotics kids and spent your time in quiz bowl. There’s one for you, too! In Fastest Finger First, high school kids train to be the first to smash that buzzer. Every millisecond counts in a battle of wits where the fighters are equally matched, and that in itself can make quiz bowl as intense as a sport. 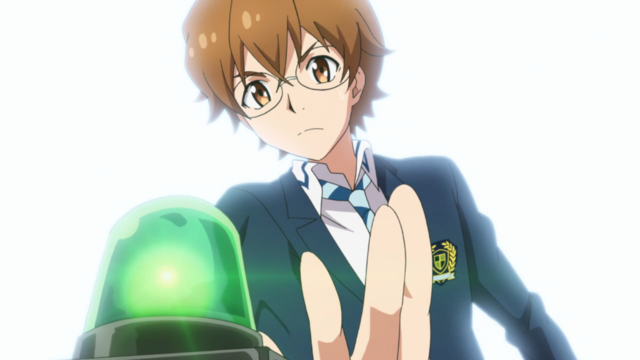 I trust that none of you specialized in this sport in high school, but let’s say you did dabble in less-than-ethical test-taking behavior. How far did you go? Ever release wasps from your headphones to distract other test-takers and set the grading curve? Sneak in cybernetic contact lenses? Take out the competition by firing pencil lead at them? No? Well, that’s disappointing. Just think how fun exams could be if you turned test-taking into an extreme sport.

Teekyu has thus far blessed us with nine seasons of it hyper-compressed glory. Ostensibly about a tennis club, the actual sport in Teekyu is everything you can possibly think of except tennis. It’s a sports anime where you are the protagonist, the show itself is the rival, and the sport in question is extremely high-level shitposting. Now that’s my kind of sport. Let’s get to that training arc, shall we? 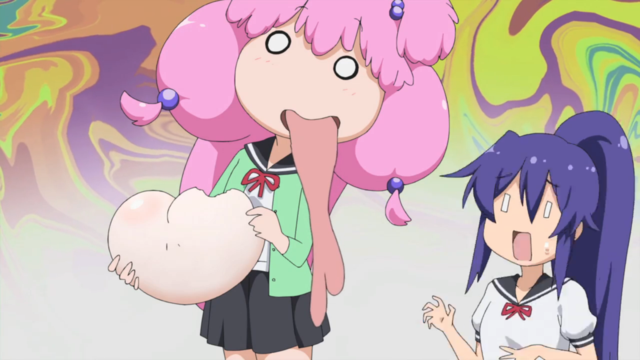