Wondering What Cardcaptor Sakura All About? Let's Catch Up on the Series before the Clear Card Arc!

Written by Emily Bushman, author of Cooking with Anime! 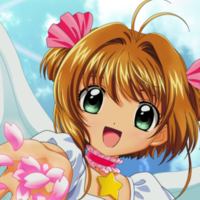 Cardcaptor Sakura, created by the acclaimed CLAMP, is making a surprise comeback for the winter 2018 anime season with the Clear Card Arc! As a long-time fan and lover of the series, this girl could not be more happy about the return of the series. It was the first manga set I collected in full, the first series I ever read the whole way through, and the first romance my little pre-pubescent heart truly fell for. I even started writing (terrible) fanfiction purely because of my love for the characters and relationships in the Cardcaptor Sakura series.

But after the new season was announced, I faced a bit of a problem – no one I talked to really knew what the show was about! I found myself at a loss... how could I make sure my friends were as hyped as I were for the show if they didn't know what had happened? After all, the Clear Card Arc being adapted takes place after the events of the first series. If you don't know what happened there, you might find yourself a little out of the loop. So, without further ado, allow me to catch you up! 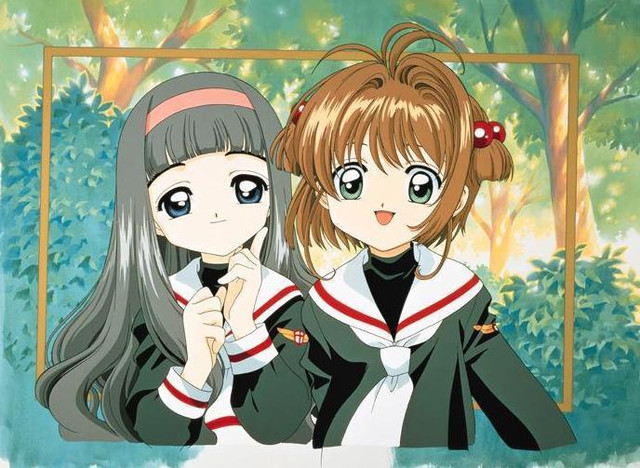 SPOILER WARNING: All that follows contains spoilers for the Cardcaptor Sakura manga and anime. If you don't want to spoil yourself this way, go read the manga or watch the anime (which you can see right here on Crunchyroll)!

The following information will primarily cover the events of the manga, with small asides to remark on differences in the anime. The two are different, though not overwhelmingly so. If you're interested in reading or seeing the source material before the new series begins, the manga is light, easy reading, and the anime has more of everything – more filler, more cards, and some off-script additions.

Let's say you know nothing about this manga or anime series. First things first – no, this show is not about gambling season in Japan, but rather a little girl, Sakura Kinomoto, who one day discovers an old book in her father's library and accidentally unleashes the magical Clow Cards, from the book when she peeks inside. "Clow cards?" I hear you ask. "Are you sure you're saying that right?"

Well, yeah. The cards were created by one man, the deceased Clow Reed, regarded as one of the best magicians of his time (in a universe where magic is not commonly regarded as normal). Reed created the cards, which are sealed in the Book of Clow (hence "Clow Cards"). The cards (19 original cards in the manga, 53 cards in the anime) each represent a force (i.e. the Windy Card) or concept (i.e. the Maze Card). Each card has its own personality and generally manifests some physical version of what is on the card. The Book of Clow itself has two guardians – Cerberus and Yue.

After Sakura has unleashed the cards unwittingly, Cerberus comes along and announces that it's her job to get them back in the book. Sakura must master each card so she can get them safely back under control in the book, otherwise they act up and sometimes even hurt people. As a result, the task of collecting the cards becomes the main focus of both the manga and anime series. 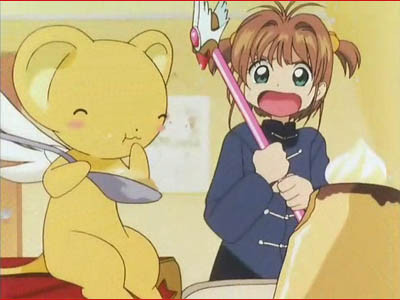 The first six volumes of manga (the first and second seasons of anime) cover the Clow Card Arc, in which Sakura sets out to recapture the Clow Cards and become their master. When the manga and anime start, Sakura is an elementary school girl in fourth grade. She lives at home with her brother, Tōya, and her father, Fujitaka. At this point, she's already opened the Book of Clow and begun capturing cards (having already captured the Windy, Jump, and Wood Cards).

The first card we see Sakura capture is the Fly Card. While at school, she notices big bursts of wind sweeping across school and she tries to seal them with the Windy Card, but the Fly Card is able to escape. Failing to come up with a plan, Sakura has a dream where she sees an injured bird soaring through the air. The next day at school, she hears that same bird cry, and sees another gust of wind. Putting two and two together, she realizes that the Fly Card is injured, and she uses the Windy Card again with a gentler approach.

This time she succeeds. She binds the card by writing her name on it, and therefore makes herself the owner of the card. Since she bound the card to herself, she can now use the Card to soar through the skies! 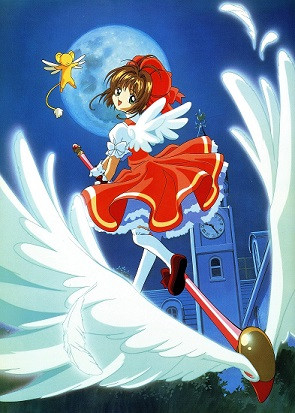 Things continue similarly through the next few volumes. Sakura comes across Clow Cards, her best friend Tomoyo makes her a really cute outfit to wear to the fight, Kero gives some advice, and Sakura is able to seal the card. And then Syaoran Li shows up from China.

Syaoran Li is a descendent of Clow Reed and the self-proclaimed rightful owner of the cards. He competes with Sakura, using his own brand of Chinese magic, to try to capture cards and seal them with his name. They battle it out, starting off as enemies and gradually thawing out to friends toward volume five and six of the manga. Syaoran is able to capture some of the cards, but Sakura still holds the majority. 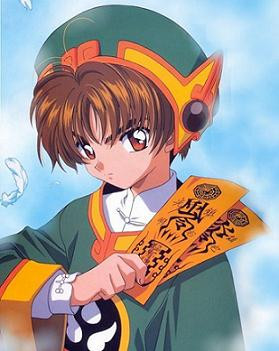 This arc is concluded in the Final Judgement, where those attempting to seal the cards are tested to see who can be the ultimate master of the cards. Leading up to this trial, Sakura begins having troubling dreams where she can sense the presence of the second guardian of the Book of Clow, Yue. Yue has not made a physical appearance yet, unlike Cerberus.

After Sakura catches the last card, the Earthy Card, Yue makes himself known for the first time. He transforms out of his temporary form (a boy named Yukito, Tōya's best friend, whom Sakura has a massive crush on), and challenges her to a fight that will determine if she will be the master of the Clow Cards. Not wanting to hurt Yukito himself, Sakura declines. Yue attacks her anyway, forcing her to fight. After some wild events, Sakura is able to subdue Yue and talk to him about his own relationship with Clow Reed – a master who, it turns out, Yue misses very much. Sakura admits she'd rather be friends with him than be his master, and with that, Yue consents to letting Sakura become the Master of the Clow Cards. 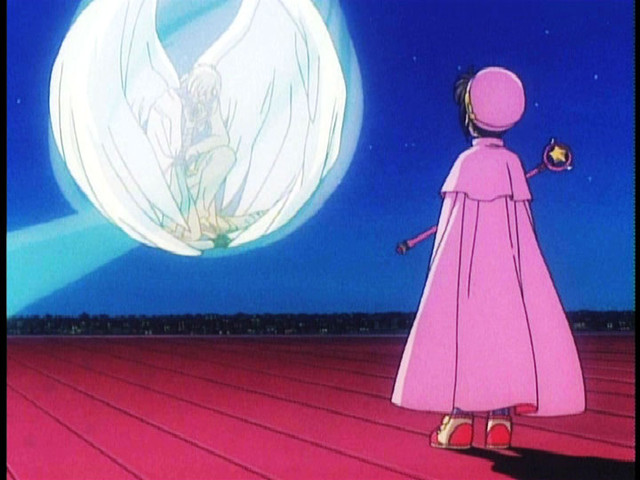 As the arc ends, Clow Reed appears to her and thanks her for taking care of his guardians, Cerberus and Yue. He follows this up by telling Sakura her power is not from the sun (as in Cerberus) or the moon (as in Yue), but rather from the stars.

From this point, we move into the next six volumes of manga (the third season of the anime). Sakura's class receives a transfer student, a boy named Eriol from England. Since Sakura is now the Master of the Clow Cards, she has to depend on her own magic to support the Cards. She realizes this when she tries to use one of the cards again for the first time, and has to create a new activation spell that also transforms the Card into a Sakura Card. The new Sakura Cards have their own unique appearance, different from the Clow Cards. 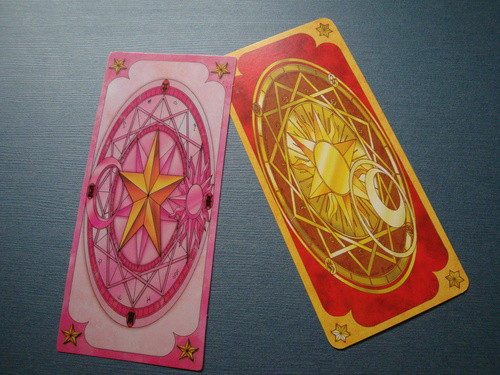 The subsequent chapters play out similarly to the first six volumes – Sakura finds herself in new situations where she must use the cards to solve various problems around the town and save people from imminent danger. Unknown to her, the problems she finds herself solving are all orchestrated by the transfer student Eriol, who seems to want her to have to use her cards. As she uses each card, she must transform it into a Sakura Card. All well and good, but it drains Sakura's energy. She relies on Syaoran and her guardians to help her find the strength to keep transforming cards. As she works more with Syaoran, they become closer and closer. Syaoran eventually realizes he has feelings for her, but doesn't know how to admit it. 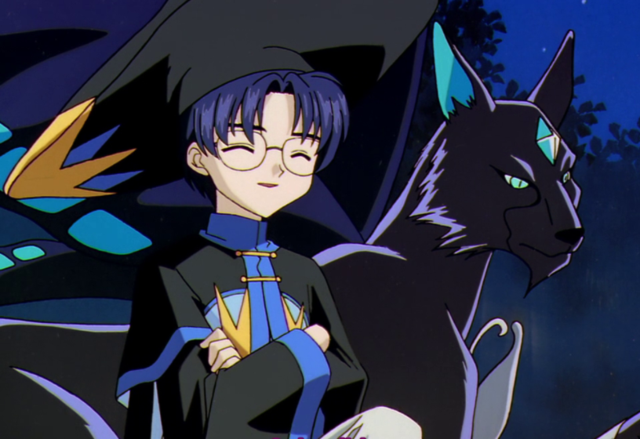 Eriol challenges Sakura to a final battle – she must change the two final Clow Cards to Sakura Cards, or the whole city will be plunged into darkness. She manages to do so with the help of her friends, and to prove her ability once and for all, Eriol asks Sakura to split his magic between himself and her father so that he is no longer the most powerful magician in the world. She does and he returns to England, happy to no longer be burdened with so much power.

Finally, in the last volume of the arc, Syaoran confesses his feelings to Sakura and reveals that since the cards have been collected, and Sakura is their appointed master, he has no further reason to be in Japan. He announces he will have to return to China and his family. Sakura, unsure of how to respond, frets for an entire week before realizing her own feelings for him. She rushes to say goodbye to him and to confess. They exchange teddy bears, and Syaoran promises he will return.

Two years later, when Sakura is in middle school and now 14, she is rushing to school when she sees Syaoran again, standing in his new school uniform, holding his teddy bear. He announces he was able to complete his paperwork to move to Japan permanently, reassuring Sakura that they don't have to write letters and call anymore to stay connected. They vow to stay together forever, and the series concludes. 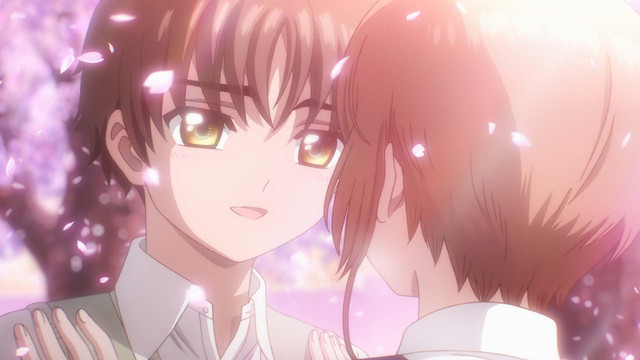 And now we're basically caught up with everything! The new arc will pick up right where the manga left off – with Syaoran newly returned to town and reunited with Sakura. After another prophetic dream, the Sakura Cards turn blank, spurring Sakura's quest to find out how to recapture them. Aided by her friends and family, there is no doubt this new arc will be one to watch in the new season! 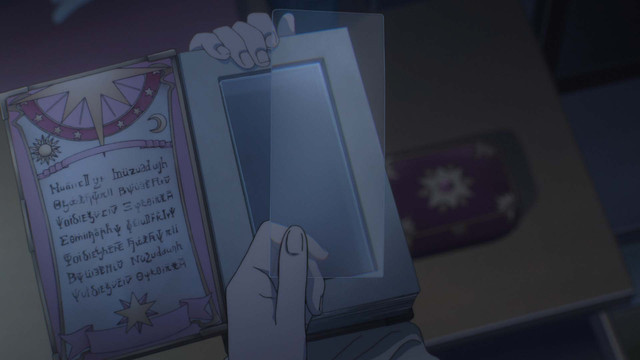 I hope you enjoyed this post! Check in next week for another recipe. To check out more anime food recipes, visit my blog. If you have any questions or comments, leave them below! I recently got a Twitter, so you can follow me at @yumpenguinsnack if you would like, and DEFINITELY feel free to send me food requests! My Tumblr is yumpenguinsnacks.tumblr.com. Find me on Youtube for more video tutorials! Enjoy the food, and if you decide to recreate this dish, show me pics! :D
In case you missed it, check out our last dish: Wing Gyoza from "Food Wars!" What other famous anime dishes would you like to see Emily make on COOKING WITH ANIME?
Tags
cardcaptor sakura, clear card arc, clamp
« Previous Post
Crunchyroll to Simulcast "Yowamushi Pedal: Glory Line" and "gdgd men's party" Anime
Next Post »
"Shoujo Kageki ☆ Review Starlight" Takes Center Stage in Summer of 2018
Other Top News
12 Comments
Sort by: