The Top 5 Ramen Lovers - Who Loves Ramen THE MOST?!

From Emily Bushman, Author of Cooking With Anime 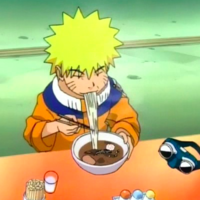 Ramen is pretty much synonymous with Japan. I mean, instant ramen is one of Japan's most internationally renowned creations, and real ramen in Japan absolutely cannot be beat. To the uninitiated, ramen is just a noodle soup. To those of use who know better, ramen is a savory, sumptuous bowl of comfort food – a soup that is both filling and satisfying while also exhibiting variation and innovation that delights the casual diner over and over. To the serious chefs, ramen presents a study in broth-making to rival French consommé, a bone broth so clear you can read the Bible through it. It also allows a chef to visit the opposite end of the spectrum with a broth so thick and luscious you don't even want to know what's in it, because to answer the question would demystify the magic of the soup you can't stop slurping. To the more artistic cooks, ramen is the medium by which your wildest food desires can be expressed. Chocolate ramen? Check. Ice Cream ramen? Yes. German ramen? Uh-huh. Strawberry ramen? No problem.

It only makes sense that such a prolific food in Japanese cuisine would resonate with some of our favorite anime characters. Indeed, there are a number of characters who love ramen to death (though none that have actually died due to ramen-related incidents, which sounds like a missed opportunity to me) and make it a goal to eat it on a regular basis. The real question, though, is who loves ramen THE MOST? After some research, I have narrowed my list down to a few contenders for #1 Ramen Fan. Let's look at the contenders! 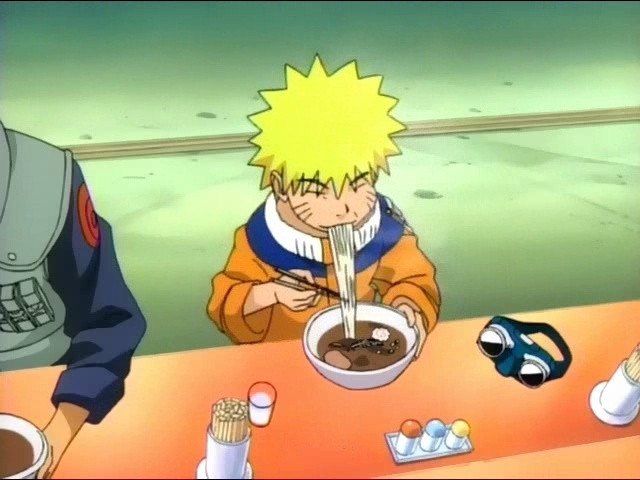 Naruto here is a clear ramen-loving favorite. Everyone knows miso ramen from Ichiraku Ramen is his favorite dish, and his love of the dish has inspired fans across the world to make their own recipes and attempt the grueling preparation necessary for making this bowl of ramen. I'm pretty sure even people who don't know much about anime know that Naruto loves ramen – it's part of what makes him such a lovable character. This kid with big hopes and dreams, who is dedicated to becoming Hokage to the point of absurdity, who attempts the impossible on a near-daily basis, will drop EVERYTHING for a bowl of fresh ramen – especially if it's free. He eats instant ramen at home. Indeed, it's not clear if he even knows how to make anything else. Some even wonder how he managed to grow properly despite his overwhelming consumption of ramen. It can't be denied that Naruto has a passion for the soup – but is his passion enough to win? 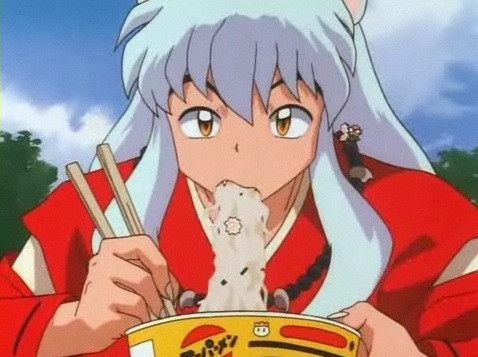 Inuyasha is a humble half-human, half-dog demon guy who's just looking to get a bite of the delicious, ready-in-3-minutes, instant ramen that Kagome brings back through time with her. That's right. You read that correctly. He waits for a girl to bring it BACK IN TIME so that he can eat it. Now that's what I call ramen dedication. To be fair, he might be more impressed by the quality of the food, considering food in feudal Japan used to be absolutely awful. Seriously, ramen actually was invented as a solution to the bland food that the Japanese served up on the regular, so it's no wonder Inuyasha would love the seasonings used in instant ramen to give it flavor. Thinking about it, it must have been a mouth-miracle for him. It probably was also a revelation to him to see a meal cooked, from start to finish, in under 5 minutes. Considering how difficult it was to prepare food at that time in history, this must have been near-magical. Unfortunately for him, real ramen wouldn't be invented until much later, so his experience was limited by what Kagome could bring back. 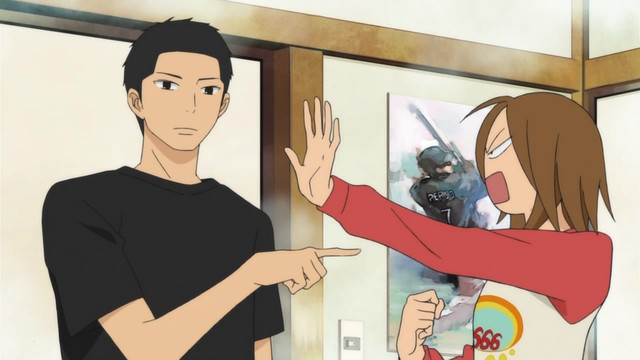 So, Chizuru once said that she loved ramen so much that she wanted to "be ramen" when she grew up. Is this indicative of her extreme love for the dish? She did grow up with neighbors who ran a ramen shop, so they could clearly fuel and foster a budding love for the dish in a young girl. In fact, she has lots of opportunity to eat many varieties of the dish due to the benefits of having awesome neighbors, putting her in a better position for ramen consumption than Inuyasha. However, upon closer investigation, this reporter *adjusts fake glasses* is inclined to believe that her love for ramen MAY IN FACT be eclipsed by her love for the son of her neighbor. You know, the one who makes ramen. Is loving a boy who is descended from a line of ramen chefs enough to merit being the #1 ramen lover in anime? Perhaps... On a side note, if you are wondering if it's possible to grow up to "be ramen," the answer would be that it's no more possible than growing up to "be a firetruck," which was my friend's ambition when she was little. Take that as you will. 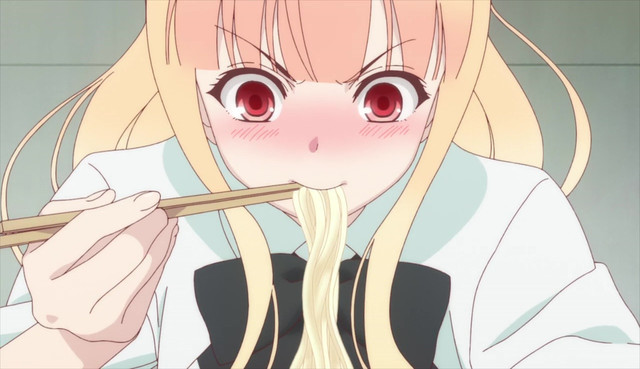 So, the title of this show claims that Koizumi-san loves ramen noodles, which is a big claim to make. Let us observe HOW MUCH she loves ramen noodles, to really test the veracity of this claim. We know that she eats ramen every day, but so does Naruto. She travels a lot to eat it, but she doesn't have to go through literal time to consume her favorite dish, like in Inuyasha. On the other hand, while Naruto and Rai (see below) tend to go with the same ramen every time, Koizumi-san isn't afraid to eat outside of the box and try new and unusual things, like natto cream-cheese ramen. She's a very adventurous eater, which also has the side benefit of placing her into funny and unusual situations, like the time she found a lost girl and, instead of returning said child, instead treated her to ramen. What a noble spirit. (Please don't try this in America, as giving food to lost children doesn't go over well here). She makes it her life mission to eat ramen every day, which is a weightier ambition, in terms of loving ramen, than Naruto. While he eats ramen every day, being Hokage is his life mission, not simply nomming on his favorite food. 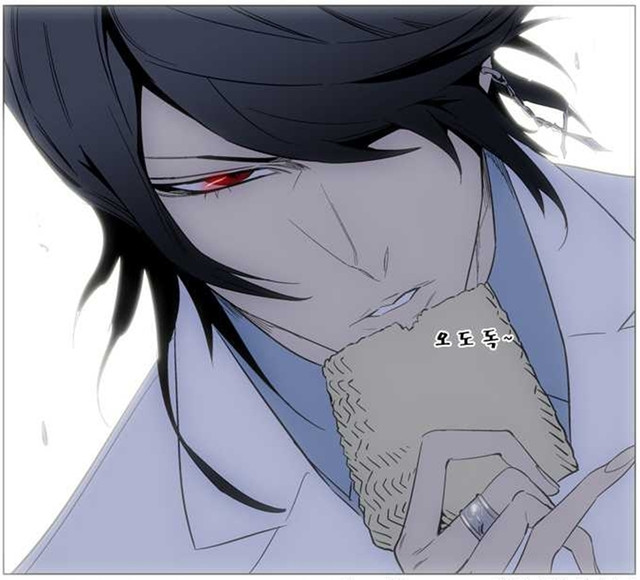 Our dark-horse contender is Raizel from Noblesse, which was actually a webtoon and a manhwa before it became an anime OVA. It was released on DVD in 2015, and a second animation was released on Crunchyroll in 2016. Raizel is a Noble, who has been asleep for 820 years. And, wouldn't you know it, when Rai wakes up, he's hungry. And what is the food he becomes most attached to? Ramen, of course. It comes as a surprise to pretty much everyone that this high and mighty Noble debases himself by eating ramen regularly, which is seen by many as a cheap, quick, and easy food. And indeed, while there is gourmet ramen out there, Rai loves the stuff, eating it at any opportunity. It's a comic relief moment that's popular with the audience of Noblesse, as the contrast between such a smart, sophisticated guy is thrown into relief when he gets his hands on a bowl of ramen and his delight becomes apparent. In fact, ramen is to Rai as it kind of is to Naruto. A funny quirk in his character. Is that enough to win the title of #1 Ramen Fan?

And the Winner is... 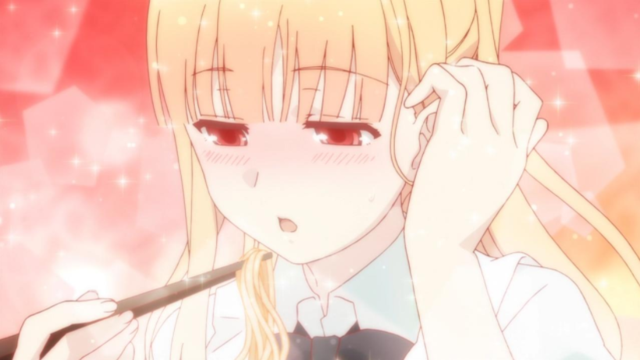 Koizumi-san take the prize here. While Naruto and Rai love the food a great deal, it's more of a schtick for their character – a quirk that makes them unique. Yes, they love anime, but they also don't branch out much beyond their go-to favorites. Inuyasha loves ramen, but he only gets to sample the instant kind, making his experience with ramen limited. Furthermore, he doesn't really seek it out on his own – rather, it's a perk of working with Kagome. Chizuru once joked about being ramen because of how much she loves it, but being is not the same as devoting your life to the dish itself. Not to mention, she seems love love a certain ramen boy more than she loves the soup itself.

But Koizumi-san... She has dedication to the food to match Naruto and Rai. She will eat it at any chance she gets, like Inuyasha. Forget the son of a ramen shop owner, Koizumi needs no love but that of the soup itself. Her extreme persistance in ramen dining, willingness to branch out and try many different flavors and styles, dedication to travelling to famed ramen shops, and non-apologetic appreciation of the soup sets her apart from all others. She truly goes above and beyond to enjoy this delectable dish, making her ramen's #1 fan among anime characters who love ramen.

No matter the winner, at the end of the day it's important to appreciate the deliciousness of ramen! These five characters love it, and you can too. Click here to get started making Naruto's favorite ramen, here to read about a failed pineapple ramen experiment, and check back later this week for a recipe for German ramen! At the very least go out and buy yourself a cup of instant ramen – you won't regret it!

I hope you enjoyed this post! Check in next week for another recipe. To check out more anime food recipes, visit my blog. If you have any questions or comments, leave them below! I recently got a Twitter, so you can follow me at @yumpenguinsnack if you would like, and DEFINITELY feel free to send me food requests! My Tumblr is yumpenguinsnacks.tumblr.com. Find me on Youtube for more video tutorials! Enjoy the food, and if you decide to recreate this dish, show me pics! :D
Tags
cooking with anime, ramen, naruto, inuyasha, kimi ni todoke, noblesse
« Previous Post
"Cardfight! Vanguard" Continues With New Season in May of 2018
Next Post »
Anime Recap: Pokémon Sun & Moon Returns, New Watanabe Anime & More!
Other Top News
12 Comments
Sort by: