Deku's Tears: Why the World Needs a Hero Who Wears Their Heart on Their Sleeve

A hero should be able to do more than just smile 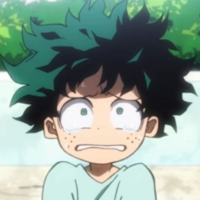 Out of My Hero Academia’s many standout moments, a recent one hit me the hardest. Deku lays on the ground, his body beaten and mere moments from being crushed by a bloodthirsty villain. He cries and begs forgiveness to his mother and his mentor for failing them. Behind him is Kota, who he was meant to save. The young boy shares Midoriya’s terrified tears as he watches his would-be hero’s imminent death unfold.

Unable to take it any longer, Kota unleashes his own power on the enemy: an underwhelming splash of water. While it has no physical effect on the tough opponent, it reminds Midoriya that he still has something to protect. With his twice-broken arms he pushes himself up off the ground and with tears in his eyes he unleashes his most devastating attack yet. Midoriya stands over the unconscious body of the defeated villain - himself bloody and beaten - as Kota looks on in awe. In that moment, Deku became his hero. 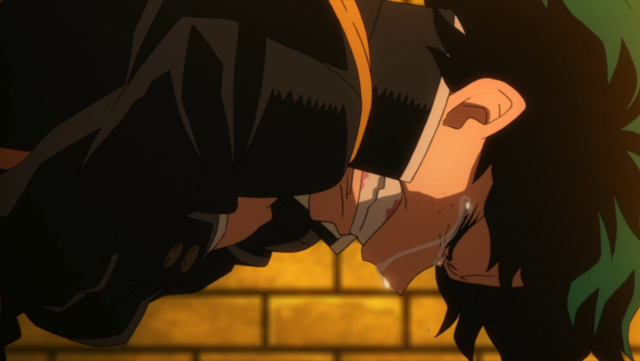 While the bettle may be an impressive display of One-for-All’s raw power, Muscular’s defeat at his hand is not what made Midoriya a hero that day. The defining moment in that fight is when he chose to stand and fight to protect Kota. He was outclassed and knew it. Fear was written all over his face, and Kota saw it. He saw just how scared Midoriya was, and he saw him stand his ground anyway. Midoriya may aspire to be a hero like All Might, smiling in the face of danger, but it’s his deep expressions of fear, sadness, and empathy that make him such an inspiring figure to so many others.

Rewinding back to the first episode, our very first moments in the show are of a crying Midoriya. He’s much smaller and at this point quirkless. He clenches his own shirt in fear and pleads with a group of bullies while standing between them and their target. “Can’t you see he’s crying?” he asks, tears streaming from his own face. It’s an appropriate introduction to the hero Deku. 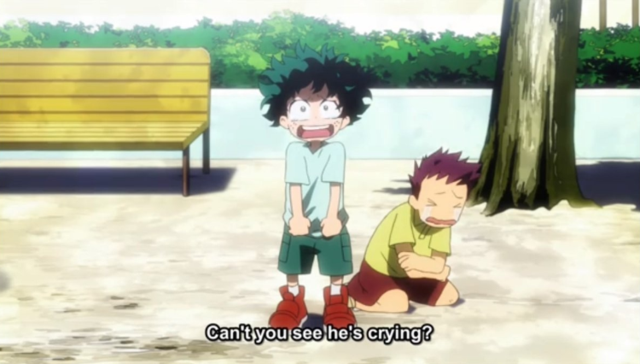 Tears are not altogether uncommen in shonen, but they are often perceived as a sign of weakness or shame. They are an open display of emotion and therefore a vulnerability to a clever villain. Emotions are volatile, and can be exploited. Therefore, a stoic hero is a strong hero. The villains are unable to read their opponent, making the hero unpredictable as well as terrifying. Emotions are intensely human, so the ability to suppress them is rather inhuman. What other inhuman power must someone with such deep control over their own emotions possess? This lead to a generation of strong characters either fautlessly stoic or ashamed of their own emotions.

All Might certainly fits the bill. His permanent, unflappable smile is a kind of stoicism. In the face of pure evil when normal people would cower and flee, All Might smiles. In the face of pain and debilitating injury, All Might smiles. When wracked with guilt over those he has been unable to save, All Might smiles. It’s a positive facade the masses can look up to. Even though they might be weak, someone much stronger than them is out there protecting them, and he’s doing it with a smile. His status goes beyond being heroic figure to a existing as a pure ideal that shapes the world around him.  All Might is also the person Midoriya looks up to most. All Might inspired him to be a hero. He wants to save people with a permanent smile chiseled onto his face, just like All Might. He doesn’t realize how much of a mistake that would be.

Let’s look back at Midoriya’s introduction. Were his tears born of cowardice? Did his emotions cloud his judgement? Did they lead to his defeat at the hands of the bullies? No, no, and no. Rather, those tears were indicative of his greatest strengths: empathy and bravery. He cried because he felt the bullied child’s pain. Yes, he was scared, and that made him cry. However, the fact that he could stand his ground and defend the victim despite being afraid is evidence of his incredible bravery. 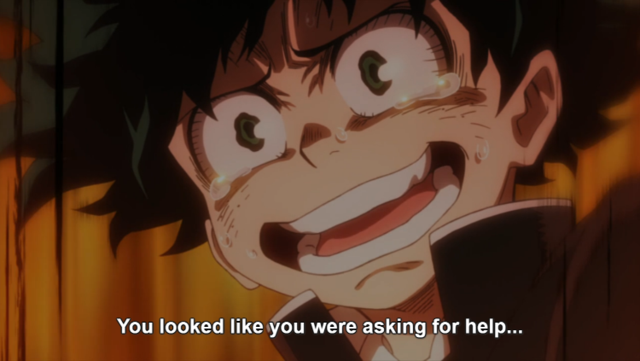 These brave and empathetic traits manifest themselves not just in the two situations I’ve listed thus far, but throughout the entire series. When Bakugo is being held hostage by a villain in the second episode, a quirkless and crying Midoriya rushes to his aide. At the entrance exam he risks his own entry into UA to save Ochako while other students fled or thought of themselves. At the sports festival, he risked and lost everything to reach Todoroki. In every instance Midoriya wore his fear, his pain, his heart on his sleeve. In every instance Midoriya inspired someone else to be greater.

All Might was able to endure the limits of his own injury to save Bakugo. Ochako was willing to sacrifice her own performance on the exam to help the one who saved her. Todoroki was able to embrace both himself and his past. Where All Might inspires by being superhuman, Deku inspires by being intensely human. All Might is an ideal, and you can't approach an ideal. You can only aspire to it. In aspiring towards that ideal, Deku became the kind of hero All Might couldn't. He became approachable. He wears his heart on his sleeve and shows the intensity of his emotions, and others feel it too. They see him struggling, hurting, screaming, crying, and fighting every step of the way, and they realize they can do that too.

It’s not just his friends and loved ones Midoriya inspires, either. He inspires us as well. We can’t relate to superhuman powers and intense battles, but we can relate to pain and struggle. Fear and pain can make you feel weak and powerless. Powerlessness is a strong, debilitating feeling. It consumes us. It overwhelms us. It makes us feel small and useless. We find ourselves thinking that if only we were someone greater and more powerful we’d be able to stand up for ourselves and fight.

When I started watching My Hero Academia, I was at a place where I felt overwhelmed by those feelings. Deku became an important figure to me, as he has to many, many others. He was small, meek, and didn’t have any power, yet he fought. He embraces all those emotions that make him human. They burst from him like tidal waves as he fights. Even after One-for-All was passed onto him, he never gave them up. That emotionality made him worthy of his power. It gives his power meaning. If All Might is the hero who saves people with a smile, Deku is the hero who saves people while crying. While All Might’s smile assures that someone will be there to save us, in Deku’s tears we see the reflection of our own fear and the will to keep moving forward. When Kota looked at the bloody, broken, triumphant Midoriya, he also wept. We had finally found our hero. 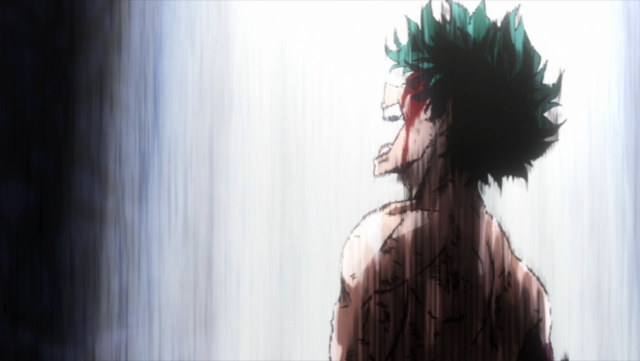 Danni Wilmoth is a Features and Social Videos writer for Crunchyroll, co-hosts the video game podcast Indiecent, and gets pretty emotional about heroes. You can find more words from her on Twitter @NanamisEgg.
Tags
my hero academia, danni wilmoth, deku, izuku midoriya
« Previous Post
Hunter x Hunter, A Journey Unlike Any Other
Next Post »
"Fate/Extella Link" Gets a Quick Preview in New TV Spot
Other Top News
12 Comments
Sort by: