This Anime is Forcing Us to Stretch Our Definition of What Defines a Face!

Are These Asobi Asobase Faces Even Allowed? 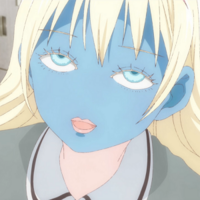 Asobi Asobase - workshop of fun - is hands down one of my favorite shows this season. Its bright, cutesy opening is a deceptive veil hiding a comedy so abrasive and in-your-face that it rivals even Pop Team Epic. It revolves around the goings-on of the Pastimers Club, a memorable trio of girls who are somewhat mean, a little self-centered, yet still the best of friends...sort of. They’re nothing if not outrageous, and much of Asobi Asobase’s outrageous humor comes in the form of extremely screenshot-able “faces.” I use that term loosely. You’ll soon understand why.

Listen, I already know what a face is. You already know what a face is. Bear with me here for a moment. For clarity’s sake, I need to define what a human face is. It is a feature located on the frontal surface of the human head. Generally, it prominently includes two eyes, a nose, and one mouth. Artistic renditions of the human face can be as simple as two dots and a single line and still remain recognizable. This is what we mean when we talk about a face. With that out of the way, we can continue.

Asobi Asobase is really pushing it when it comes to what constitutes a face around here. 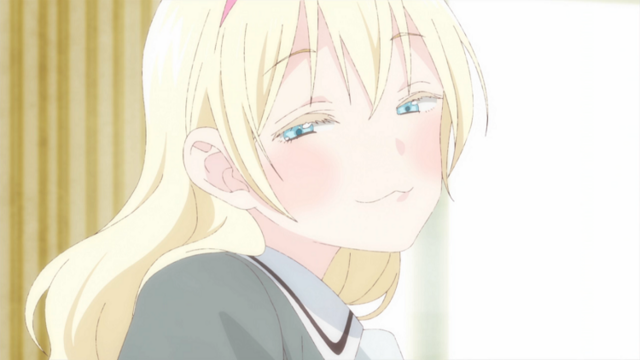 It’s not like the show doesn’t know what a face is. Take the above image, for example. Olivia has a fairly standard face here. She has a set of eyes, eyelashes, eyebrows, a mouth, and some slight shading indicating that she probably has a nose. It’s even all assembled in the smuggest form possible, ensuring that this will not be the last of it you see on the internet. Without a doubt, this is indeed a "normal" face.

Let’s take a look at some of the less conventional faces the show has to offer. 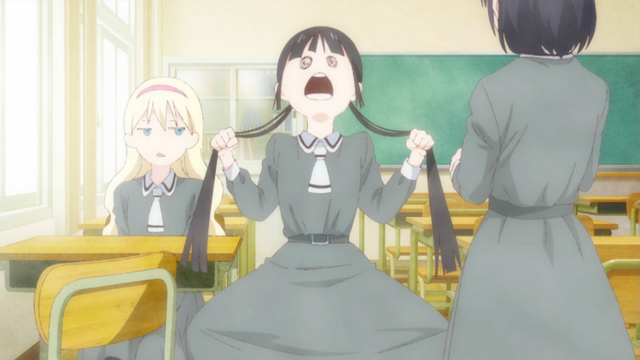 When it comes to faces, this Hanako face clearly falls on the more minimalist side of the spectrum. Its three simple circles are enough to convey two eyes and an open mouth, so it gets a pass, if only by a little. 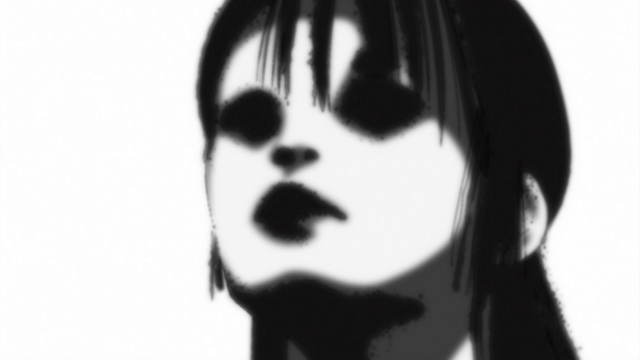 This one is less of a face so to speak and more of an ink blot someone holds up to you that you squint at and identify as a face in the least confident voice possible. It could also be a flying saucer or what remains of the once great city of Pompeii. 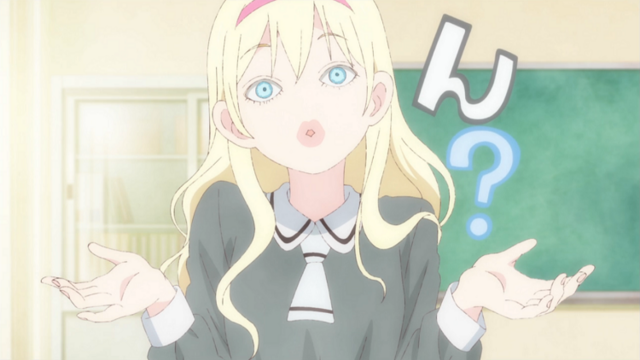 Okay this one is definitely a face, but I’m including it anyway because it kinda freaks me out by including her lips but omitting her nose.

While those examples push the boundaries of what a face truly is by erring on the side of minimalism, there is a rather clear purpose for doing so. Faces in anime are typically pretty under-detailed compared to their counterparts in both the more naturalistic style of artists such as Michelangelo and Da Vinci and in real life. Simplifying the style even further creates a novel form of shorthand for faces that conveys as much emotion as possible in as few brush strokes as are needed. This leads one to wonder, what would happen if they went in the opposite direction? What if they added MORE detail to the faces?

Well, it would be too much face. 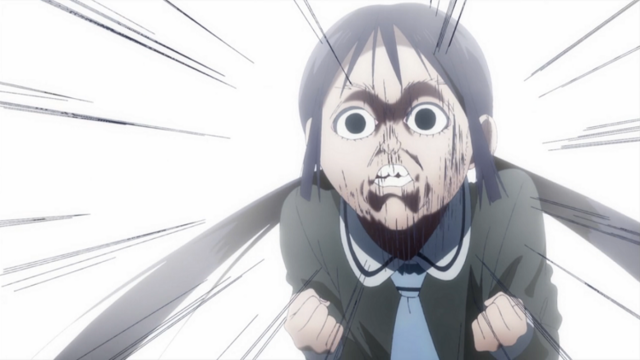 Don’t get me wrong, it’s a very well-drawn face. Truthfully, it sits in a weird middle ground between too much and too little, yet completely avoids being anywhere near a “normal” face that one would assume exists there. It’s kind of amazing in that respect. It also makes me very uncomfortable to look at for too long. 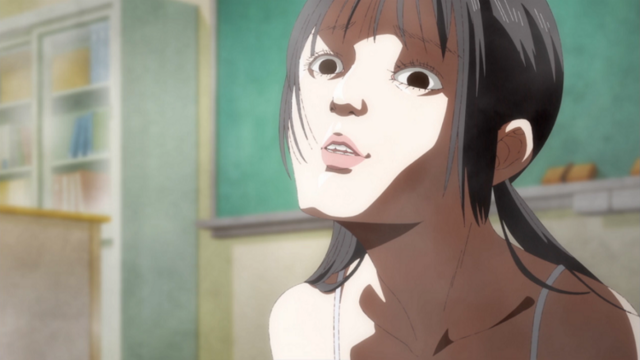 Discomfort seems to be the intended effect of these over-detailed faces. It’s rather interesting to dissect the different emotional responses that over-detailed and under-detailed faces create. The more minimalist a face gets, the more cartoonish it looks. It can then be either played up for cutsey humor or subverted for a more mischievous purpose. Meanwhile, an over-detailed face comes across as more serious. It can also tread into uncanny valley territory, making viewers uncomfortable. One can only wonder the response elicited by including a normal face and an over-detailed face in the same shot. 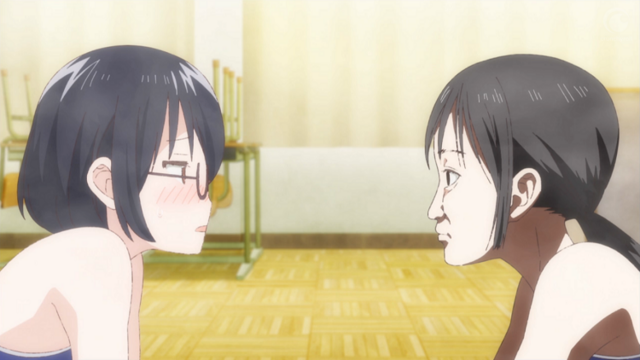 Let’s take a look at one last face. A face that truly pushes the boundaries of what it means to have two eyes, a nose, and one mouth. A face that really takes its time to settle in.

This face is a story told in three parts. 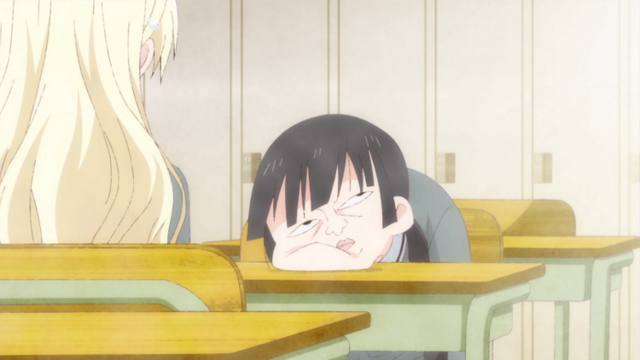 The face starts out like a pretty standard face. It has all the necessary features, though the lines defining each feature are a little harsher than normal. Nothing to fret about here yet. 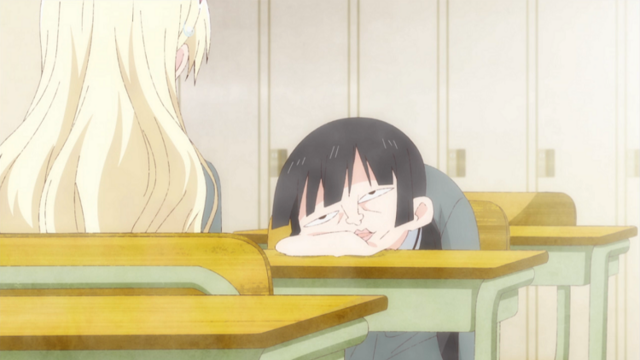 Okay, now we have some idea what direction this is going in. The issue here is beginning to take shape, or rather, losing its shape. 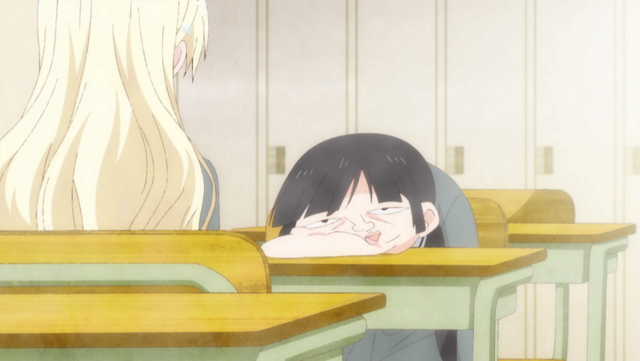 Here we’ve reached the end of our story. Hanako’s face has almost completely melted off of her face. Yes, it still has all the necessary features. Eyes? Check. Nose? Check. Mouth? Check. However, there is a crucial element that has been taken for granted throughout this entire exercise. A face must be located on the front of someone’s head. Hanako’s face here has taken on a mind of its own that is trying with all of its might to escape from the head it resides upon. This is a face in only the most dadaist of senses. It's as if Salvador Dalí himself came back to life and took it upon himself to animate this particular cut of Asobi Asobase - workshop of fun - for us. This face is nothing short of a masterpiece.

There’s a lot to love about Asobi Asobase, and rest assured this isn’t near the full breadth of gut-bustingly outrageous faces the show has to offer. In fact, when gathering screenshots for this little endeavor, I found that I had collected a good two dozen faces only halfway through the first episode. I’ve long been a fan and collector of good anime faces, and Asobi Asobase has been delivering them to me at a frankly frantic pace. Each and every one is all a part of this show’s incredibly funny and overwhelming charm. And yet, I can’t help but wonder what Asobi Asobase would look like if it had tried to look as consistently cute as its opening makes it out to be... 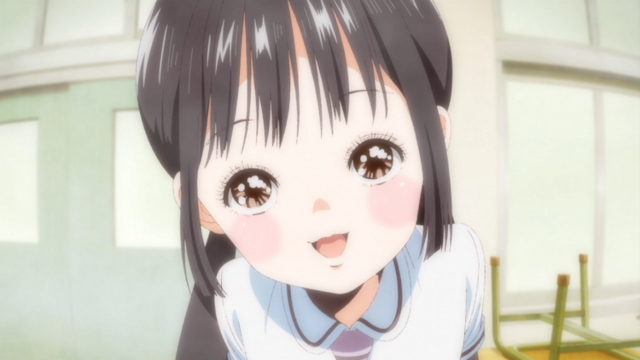 ---
Danni Wilmoth is a Features and Social Videos writer for Crunchyroll and also co-hosts the video game podcast Indiecent. You can find more words from her on Twitter @NanamisEgg.