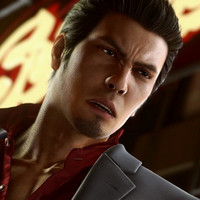 I was fortunate enough to have lived in Japan when I was younger. In fact, it kickstarted this whole anime thing for me--I've talked about this before. While it certainly was a special experience that I'm eternally grateful for, it really wasn't that different from living in the States. I still went to school, my parents went to work, I played video games at friends' houses and ate pizza and watched movies and walked the dog.

But the point is, life in Japan wasn't as wacky or out-there as the manga I was reading, or the anime I was watching on TV, and it was the little things I missed the most: canned almond cocoa from a vending machine, convenience store food, the pleasant ring of a chari, yellow hats and randoseru on little kids coming home from school, the smell of citronella coils that people started burning when the mosquitos came out in full force. I left Japan in 1996, and in no uncertain terms, I missed it. 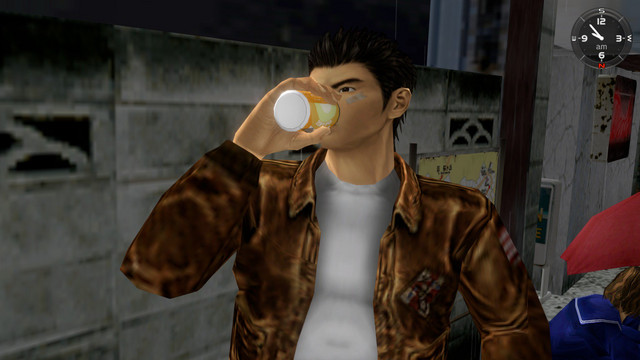 It wasn't until November 8, 2000--when Shenmue was released in the United States--that I could safely say I was back. Sleepy 1986 Yokosuka has its differences from Okinawa, where I lived, but so much was the same--the look, the sounds, the feel that I was strolling through the streets of a quiet, friendly Japanese town... and then it reminds me that I'm still playing a video game. Specifically, a tale of vengeance.

Shenmue starts hard and fast, with Ryo Hazuki's father being murdered right in front of his eyes, Ryo swearing revenge on the ice-cold killer in a green dragon robe named Lan Di, and then immediately slows down, dialing back from sudden and unthinkable violence to its effects on rainy, snowy Yokosuka in winter. You take the game at your own pace, talking to everyone in town, from a little girl taking care of an orphaned kitten to a bombastic hot dog stand vendor to a girl who very obviously has a crush on a very oblivious Ryo to so many more people. There's a military surplus store (those were everywhere in Okinawa), there's an arcade with all the cool new (in 1986) games like Hang-On and Space Harrier, and yes, there's those vending machines I was talking about earlier. 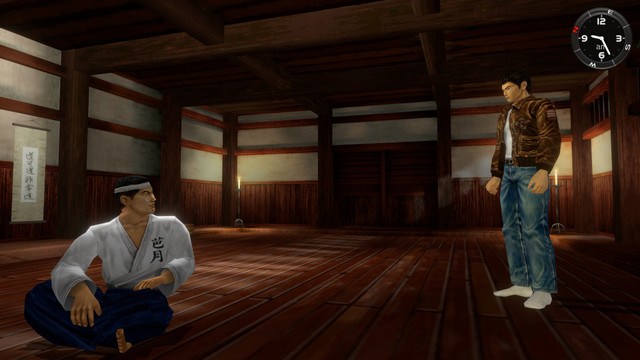 Most of Shenmue's charm comes from how much you can do, and just how deep you have to dig to actually find what you need to progress, whether it's information or items. Some characters, like bartender Saijo-san, don't often have information for Ryo save for specific, early quests, but I still make it a point to go say hi every now and then. You can open almost every drawer and cabinet in Ryo's house, thoroughly invading the privacy of housekeeper Ine-san and uchideshi Fuku-san, knock on every door in town to see who's home, and even stroll right into Yokosuka's own small-time yakuza operation (and then get politely told by a lieutenant that you can't just stroll in like you own the place). Yes, Ryo, I'll get to your revenge soon--first, I gotta feed that kitten and maybe buy a new music tape and say hello to the family at Manpukuken Ramen. 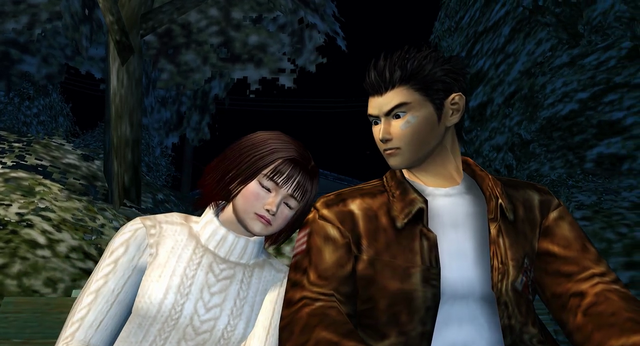 Shenmue is vast, and beautifully mundane, and still kinda clunky. I am very firmly in the camp of "it's worth the time you put into it," because by now I can make Ryo dance, but I'm also understanding enough to know that not everybody loves QTEs--this is the game that coined the term. There are fights, and some rapid-fire action in the final third of the game, but it's mostly exploration and soaking it all in. In terms of its "build tall and deep" open-world design, Shenmue really feels like a very expensive trial run for Sega's later Yakuza franchise, which pulls players out of a chill harbor town and into the bustling red-light districts of Japan's biggest, busiest cities. 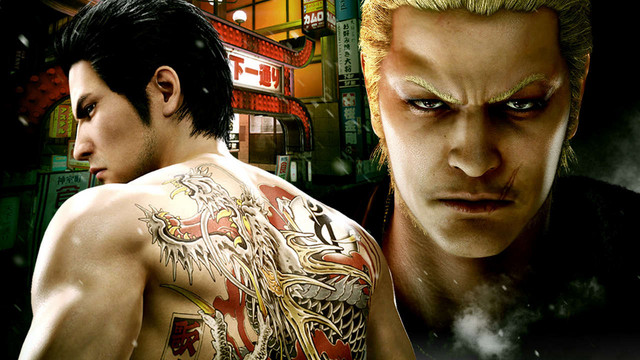 Yakuza doesn't mess around: it's hard drama from the word go, with--what did I say in the Yakuza 0 review? "Rough men with hearts of gold who may not be on the straight and narrow, but they know right from wrong," and gritty, melodramatic stories that wind through betrayals and sudden plot twists, and a massive list of minigames, goofy sidequests, and straight-up distractions for series hero Kazuma Kiryu. If there's one thing you will easily find in a large Japanese city, it's distractions and entertainment, especially in the Yakuza series' fictional version of Kabukicho, called Kamurocho in the game. 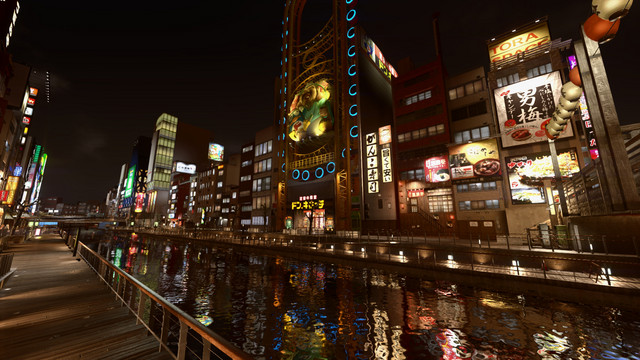 Kiwami 2 even adds another city, Osaka's Sotenbori district (it's Dōtonbori IRL), with all the glitz and glamour and local flavor of Osaka, in addition to this game's intimidating new villain, the brawny and calculating Ryuji Goda. You even get to tear up the town as Kiryu's lunatic rival/totally-best-buddy Goro Majima in an all-new scenario built specifically for Kiwami 2! 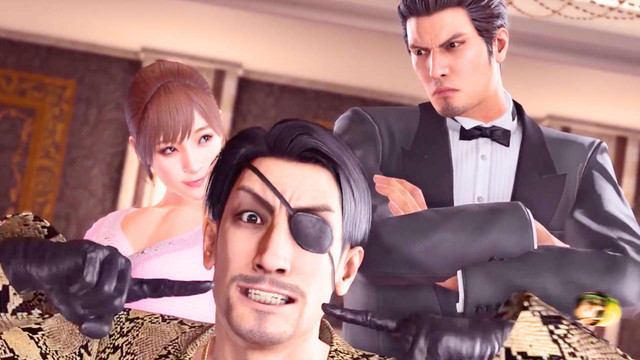 All that farting around I mentioned when talking about Shenmue? It goes double in Yakuza--drop by the arcade and play games and darts, burn money at the UFO Catcher trying to complete your collection, stop by every restaurant you're able to and try everything on the menu, go to a bar and get drunk and play darts or pool, sing some karaoke, and when you're stumbling home, get in a massive brawl and beat some poor schlub unconscious with a bicycle. Wasting time in Yakuza never feels like wasted time, because the game encourages you to hit every corner of town, try every new feature and play every new minigame, and this just makes Kamurocho feel like home. 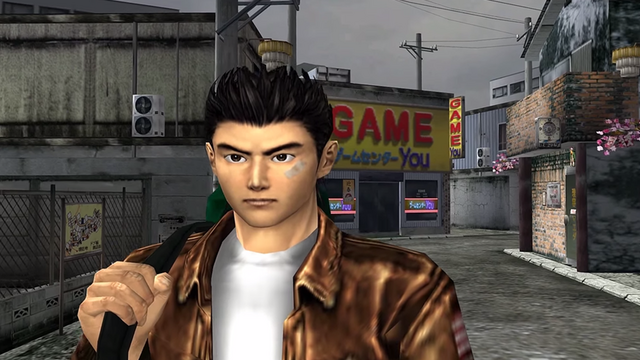 But there are still so many other open-world games, right? Massive worlds that slowly open up to you, whole cities you can drive around or the expanse of Hyrule Plain or Hope County or wherever else you want to traipse about and start trouble--so what makes Shenmue and Yakuza so special in comparison? Earlier, I talked about "building tall and deep"--the maps of Yokosuka, Kamurocho, and Sotenbori aren't particularly huge. You can cross them in a few minutes if you aren't interrupted along the way. But in Shenmue, you can knock on every door, talk to every person, make awkward phone calls to your friends and family. In Yakuza, the sheer number of sidequests and active characters makes each street corner memorable--the corner where they used to run Pocket Racing, the spot where you received a drawing from a little girl, the run-down park where you taught a dominatrix how to be mean and little kids came up and asked what you were doing and it got very, very uncomfortable. 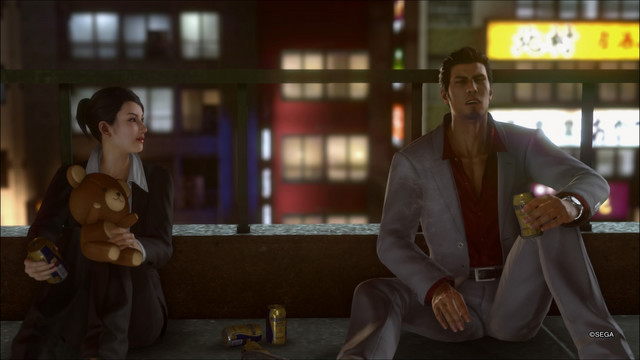 In both these games, you're not told to feel like this is your character's hometown--not only do you do that yourself, but the games make all the little touches count, to make you feel like this is a place people have put roots down, two distinct Japanese towns that are welcoming in their own unique ways. Shenmue II, included along with the first game in this re-release collection, does the same thing with its lovingly-recreated sections of Hong Kong. Nothing ever beats the real thing, but it really takes something special to make a player feel like they're really there--and I can say with a certainty that Shenmue I & II and Yakuza Kiwami 2 are pretty damn close to being there.

Crunchyroll Expands One Piece Territories to Europe and MENA