We spoke with the renowned writer and producer Yurika Tsukita about their new game! 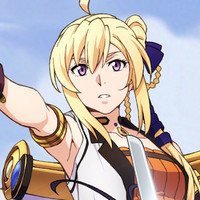 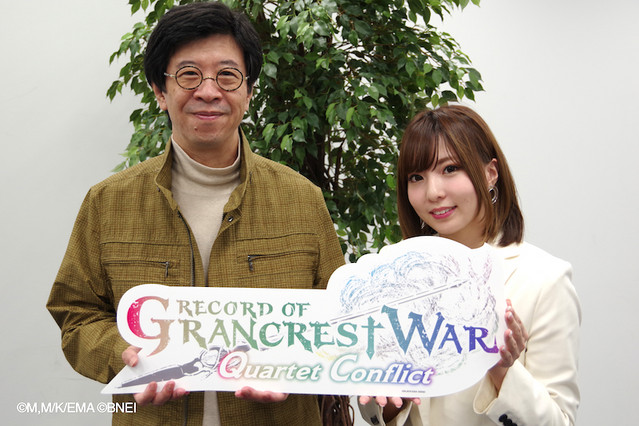 Ryo Mizuno is a legend in the realm of fantasy anime, from his work on seminal classic Record of Lodoss War to his return to those themes in Record of Grancrest War. The latter recently came to life in the form of mobile hack-and-slash action game Record of Grancrest War: Quartet Conflict, and we had the opportunity to speak with both Ryo Mizuno and one of the game's producers, Yurika Tsukita, about the project. Dive in below for a closer look at Mizuno's inspirations, the Lodoss-Grancrest connection, and what it takes to bring his wide-eyed fantasy concepts to the world of video games.

The spirit of Record of Lodoss War lives on in Record of Grancrest War, and your works along these lines have attracted a ton of attention for decades now. What is it about Lodoss and related material that keeps you inspired and motivated to create?

Ryo Mizuno: In the end, I enjoy writing about how, in extreme situations like war, people push themselves to their mental and physical limits in order to uphold their principles and achieve their goals. In reality, it unfortunately seems like most wars happen for more base reasons, but in fiction, the story really comes to life when different characters with different end goals and viewpoints can only resolve their differences by clashing on the battlefield. I don't actually give that much thought to who's right or wrong; I simply write about how they are forced to fight because of their differences and how that resolve pushes both parties to do their best to win on the battlefield. I feel these are the kinds of stories that especially need to be written during times of peace. 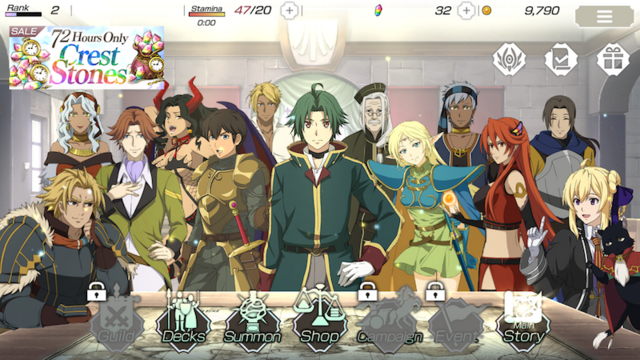 For Lodoss fans who have yet to dip into Grancrest War, can you elaborate on how the two are connected despite being set in different worlds? Are there grander connections beyond the RPG roots of Lodoss and the RPG sourcebook for Grancrest War?

They may not be connected in terms of worldview, but Record of Grancrest War is designed to allow for easy tie-ins with all sorts of other worlds and that definitely includes Lodoss.

I did also plan both Grancrest and Lodoss's worlds to be easily adaptable for tabletop RPGs, so in that sense they may well have that in common, but of course their systems and settings are quite different. That said, unlike my other works, Grancrest's world is explicitly designed to enable crossovers, so official collaborations can certainly happen that way.

What is the secret ingredient for capturing the unique feel of a tabletop role-playing campaign in the form of anime series like Lodoss War and Grancrest War?

I think it has to do with not overtly leading the viewer down the path of the scenarios I've come up with too much. In tabletop games, game masters come up with a variety of different situations for their players and it's the actions the players take in response to those situations that move the story forward. When running a game, you don't want to lead players by the nose down the story you've already prepared. It's more fun for all involved if you only lay down some ground rules so they don't disruptively exceed the bounds of the game, but otherwise let them run around freely and do what they want within those bounds, meeting them halfway with the story. 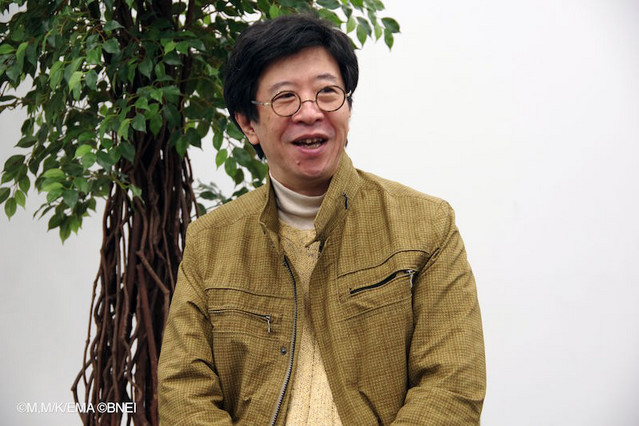 How involved were you in the development of Record of Grancrest War: Quartet Conflict? Did you pen original scenarios for the game?

No, I let other people handle that, so I only saw the finished product. When it was done, I tried it out and enjoyed it. *laughs* I did pass on some requests I had for things I wanted to see afterwards, though.

Back when Record of Lodoss War was originally created, documenting and adapting a tabletop role-playing session was a novel concept. Today there are podcasts, video series, and many other examples of turning these RPGs into a narrative experience for an audience. How do you think you would have approached the Lodoss material differently today?

Well, videos are really big right now, so if I were my younger self in this day and age, I think I'd try to become a YouTuber or even a virtual one. Virtual YouTubers can still use their natural voice, which makes for really interesting results. I think it's especially well suited to replays.

You're one of the undisputed kings of fantasy anime. What are some of the essential fantasy stories—whether it's in the form of books, movies, games, or tabletop RPGs—that inspire you?

The Lord of the Rings. Even more so than the actual story, it's the world it describes. I've re-read its dictionary countless times; I always appreciate and enjoy how much detail went into its setting.

For science fiction, I enjoy Dune and I generally like works with a firmly established worldview. In Japan, I've been impressed by the Locke the Superman comic and really any work with a long-running history of its universe.

Of course, when you get to something like Perry Rhodan, there are far too many examples to list, but again, in terms of world-building I enjoy works with detailed settings; it's the kind of style I aspire to in my own writing. 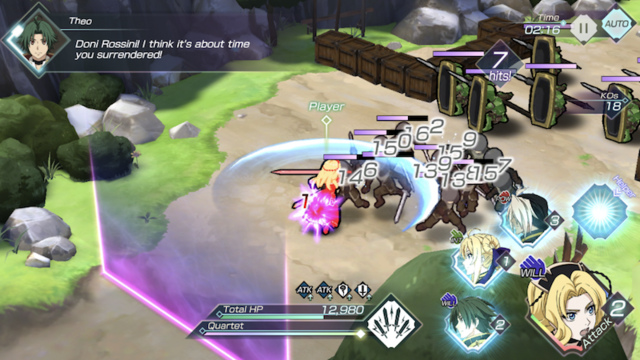 For the producers of Quartet Conflict, can you tell us a little about the process of taking Mizuno-san's series and turning it into an action-RPG? What did you find was most important when attempting to capture the spirit of Grancrest War?

Yurika Tsukita: I feel like the highly detailed characters are really the heart of this work. They all think and act in their own ways, just like real people, and they express themselves accordingly. So for the game, we're focused on highlighting each character's individuality and also pay special attention to their skills. We're also working on scenarios that delve deeper into the characters, which I hope players will enjoy as an opportunity to better get to know and like them.

Can you elaborate on the game's ongoing Faction War and how it will develop over the course of the game?

Guild battles take place every weekend and offer some really nice rewards based on how much players contribute and how well their faction does. I hope they lead to teams coming together and fighting some really intense battles against each other. Players can also get better and bigger rewards as they get stronger and contribute more. We're planning to add more maps and rules to guilds as time goes on, so I hope the players look forward to that.

Are there other regular updates players can look forward to after the game launches?

We're planning to add special login bonuses and expand the game, so I hope that players are excited about its release. 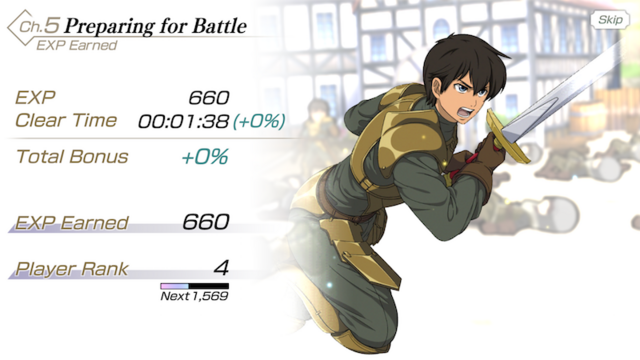 This is for both Mizuno-san and Tsukita-san: Beyond the obvious choice of Record of Grancrest War, are there any other recent anime or manga series you keep up with?

Mizuno: When it comes to properties available overseas, I've enjoyed things like Land of the Lustrous. That one works both as fantasy and as its own unique world. For comics, I thought Delicious in Dungeon was really interesting. To me, it felt nostalgic, like Wizardry's world coming to life as a manga. In recent chapters, it's been going its own, darker way and I can tell it's doing so intentionally. Ms. Kui, the writer, had never really written anything dark before, so I'm excited to see where she takes it from here.

Tsukita: I've been keeping up with the new SWORD ART ONLINE anime series, Alicization, along with JoJo's Bizarre Adventure: Golden Wind. Manga-wise, I love Weekly Shonen Jump and never miss an issue, but I'm currently really into Demon Slayer: Kimetsu no Yaiba. That one has an anime starting in January and I can't wait to check it out.

I'd like to thank Mizuno-san, Tsukita-san, and the fine folks at Bandai Namco Entertainment for setting up this interview! If you're at Anime NYC this weekend, they have a few activities you can check out, including an interactive photo booth—with the option to choose between Union or Alliance-themed photo frames—prize giveaways, game kiosks featuring Quartet Conflict, and an in-game promotion that offers up rewards for players who log in between 11/16 and 12/25.