The Many Faces of the Golden Kamuy Anime’s True Heart: Shiraishi!

He’s the lovable idiot you love to hate, but is there more to Shiraishi than stupid faces and even stupider ideas? 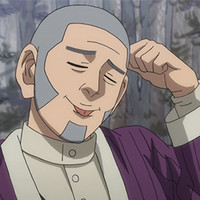 Golden Kamuy is a tale of adventure, filled to the brim with quirky characters and an amazing mixture of heart-wrenching drama, fast-paced and violent action, and calm, peaceful moments of people spending time with one another. While characters like Asirpa, Sugimoto, and even the seductive Lt. Tsurumi are stand-out characters, there’s another person in the cast that can really express not just how unique Golden Kamuy is, but is also an overlooked character in his own right: Shiraishi! While you might initially scoff at the idea, Shiraishi is a fundamentally important part of the Golden Kamuy puzzle, from his mascot-like quality of hilarious, iconic faces, to his sincere and specific character growth during the series (as hard as it might be to see under all that stupidity!). Just a note, if  you haven’t watched Golden Kamuy yet, there are some spoilers, so proceed with caution! 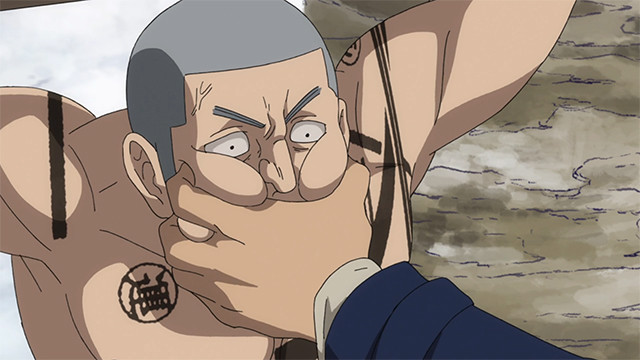 Shiraishi first stumbles into our hearts by getting his head caught in a trap set by Asirpa and Sugimoto, and despite his attempts to escape, ends up tagging along with them for the rest of their adventure. At first, it’s hard to really get a sense of what Shiraishi is really trying to accomplish: he’s a wanted man, with no real ability to fight or protect himself, and seems to throw in his lot with Sugimoto simply for the fact that he promised not to skin him for his piece of the map. Shiraishi is of questionable quality morally, with a somewhat constant air that he may betray Sugimoto and Asirpa at the earliest convenience, but he somehow ends up not only sticking with them each time it seems like he might bail, but his...unique…set of skills actually gets them out of binds and helps them on their quest! 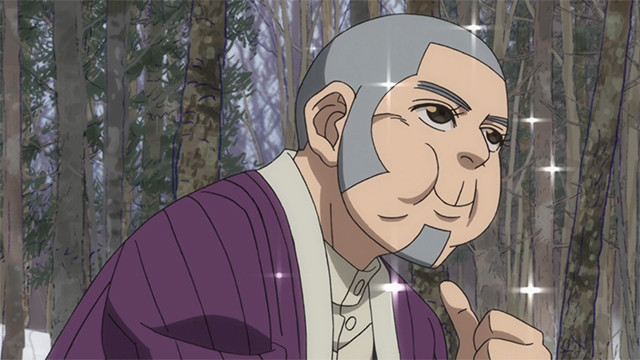 In reality, Shiraishi is so expressive because he’s so stupid, but that’s not really meant to be an insult! Shiraishi is, in psychological terms, the pure Id of Sugimoto's party: he acts only on his base desires and emotions, looking out for his own survival above all else, and once he feels he’s not in danger, he looks to satisfy any other needs he’s immediately interested in, whether that’s shelter, food, or money. In a series in which characters are hiding their true motives and much remains a mystery, Shiraishi is honest to a fault, wearing his heart on his sleeve and hiding nothing; in fact, the idea that his slight deception of Sugimoto, when he’s forced to work for Hijikata, might come to light, Shiraishi goes into a panicked despair and nearly gets himself killed and finally captured over the guilt he feels for deceiving Sugimoto! When Sugimoto finally absolves him of the guilt he’s feeling, Shiraishi has already forgotten about his nightmares of being stabbed to death by Sugimoto, immediately resuming his seemingly carefree ways. 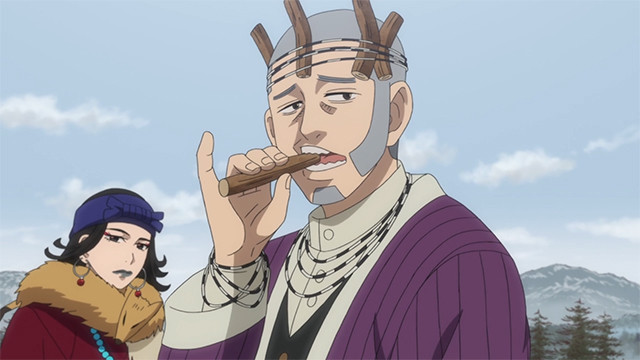 The comedy moments of Golden Kamuy fill an important role, too, as the series is filled with broken, damaged, and lonely characters, many of whom are not looking to survive, but instead looking for their spot to die. Sugimoto is driven to repay his dead friend in an attempt to reclaim a lost past. Asirpa is looking for answers, trying to understand the disappearance of her father and the potentially ghastly truth of what he’s become. The rest of the cast that appear, too, are carrying various weights, baggage, and crimes on their shoulders, meaning that without brevity and humanity, the show would be pretty grim! Shiraishi helps to really brighten up the mood in this sense, as his constant idiocy and buffoonery are good buffers to the more serious and heavy segments of the show, and his interactions with the rest of the cast, while perhaps not helping to endear him to them, certainly helps endear him to us! 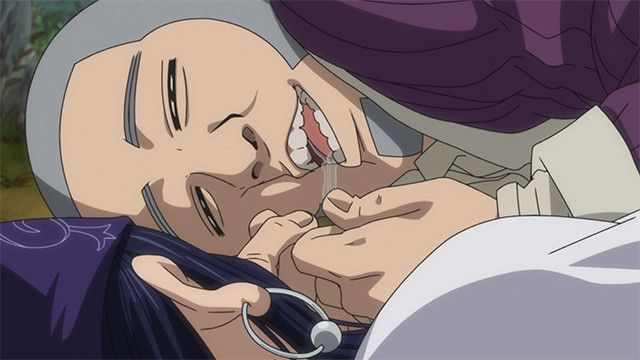 Being the comic relief in an otherwise heavy series is no easy task, however, as it can be a fine line between being too silly and ruining the mood, or just wearing out one’s welcome. This, too, is a good way to look at the excellent storytelling of Golden Kamuy: Shiraishi’s idiotic faces and actions help break the tension, but they also help us better understand his relationship with the other characters, and even their relationships with themselves. Shiraishi is a relative sheep amongst wolves when placed next to the other Abashiri convicts or Lt. Tsurumi’s soldiers, and the value they place on him is solely related to his supposed skill and usefulness in escaping. While Sugimoto values that as well, he seems to be somewhat generally worried about Shiraishi at times, as does Asirpa. Shiraishi excels at nothing other than running away from problems, as shown by his numerous botched attempts at hunting or even interacting with animals, but still Asirpa and Sugimoto invite him to their table and place value in what he can do. While that value may sometimes seem ill-placed, the Escape King has always managed to come through for the pair in the end, goofy look on his face and all! 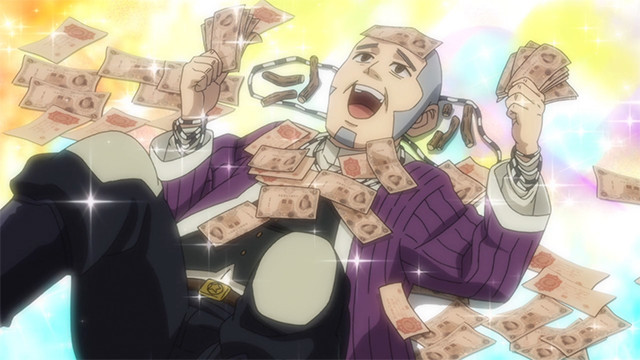 Maybe that honesty is what makes Shiraishi so endearing of a character, and shows the humanity embedded in Golden Kamuy. The series excels because the characters are relatable and human, regardless of their seemingly extraordinary circumstances, and Shiraishi is a type of glue that helps bring it all together. To draw on the popular show Friends, Shiraishi is essentially Joey: a seemingly useless, good-natured character who entertains the viewer (and the cast) through their antics, and who may have something of a heart of gold buried somewhere in their selfish chests. It’s hard to hate Shiraishi, even during his obnoxious stint of gambling at the horse track, and maybe that’s because deep down we either know someone like him, or have a little bit of Shiraishi inside of ourselves. And, maybe it’s just because he’s so pathetic that it’s hard to do anything but laugh at him and pity him just a bit when things end up not going his way after all! 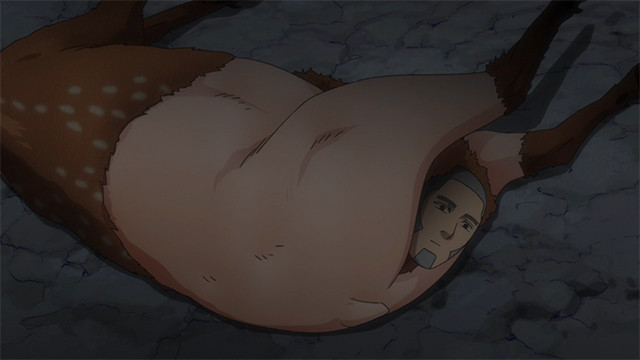 There’s an old joke about a depressed man going to see a doctor, who says, “Depressed? Why, you should go see the great Pagliacci! His act will surely cheer you up and make you laugh!” to which the man replies, “But doctor, I AM Pagliacci!” In a lot of ways, that mirrors Shiraishi’s existence (after all, most people would likely find little to look forward to after having their head sticking out of a deer’s ass!), but it also gets to why we love Golden Kamuy so much: the comedy is a break from the dire and tense situations at stake, but there’s also times in which the comedy of life is part of what makes even the most unfortunate circumstances memorable, giving us the ability to look back at them and laugh with time. While Shiraishi likely has no idea he’s doing anything that profound, we’re pretty sure that to the end, Shiraishi is going to do what he wants, when he wants, and sometimes that involves helping your friends and doing the right thing… and other times, it involves rolling around in a pile of leaves caused by a haze of gambling madness. Either way, Shiraishi is a core to the puzzle that is Golden Kamuy, and the series would be worse off without his goofy, stupid mug!

What’s your favorite goofy Shiraishi face that you've seen in Golden Kamuy? Have a favorite Shiraishi or Golden Kamuy moment? Let us know in the comments!

Tags
golden kamuy
« Previous Post
A Kaleidoscope of Feeling: Light and Color in Tsurune
Next Post »
Second Re:ZERO OVA to Screen Theatrically in Japan
Other Top News
1 Comment
Sort by: