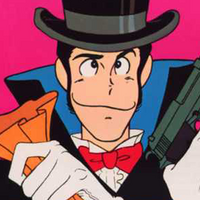 Video games and anime are pretty synonymous nowadays. You could easily think of ten different examples of how the two mediums either cross over with one another or adapt each other, and every week seems to bring more announcements of new anime gaming experiences to drain your wallet. But to truly appreciate the successful modern state of video game adaptations of anime, we’ve got to take a trip back to a time when video games were a fledgling startup industry - when consoles weren’t the juggernauts that they’d eventually become and when slapping a popular anime property onto a game was anything but a sure thing.

And we'll begin with the early arcade scene and with a series that's been popular for longer than most of us have been alive, Lupin the 3rd. 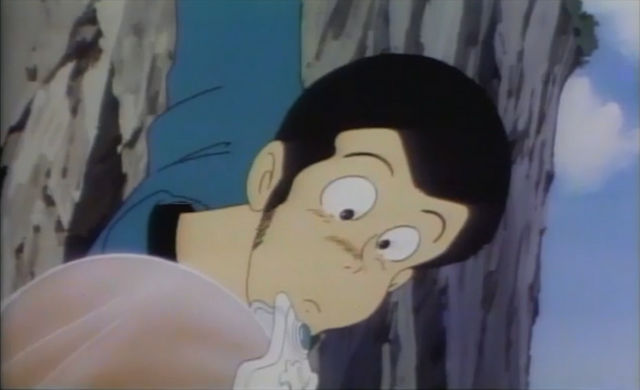 The Lupin the 3rd  franchise first became a video game in 1980 and was very similar to the other games being released at the time - There’s one screen, the sprite work isn’t super defined, and there’s only one objective, but you’re playing a Lupin the 3rd video game!

You play as Arsene Lupin III and have to take giant bags of money while avoiding the police and dogs that will haul you off to jail. The game continues until you run out of money to put into the machine, but does offer a brief bit of story with its usage of cutscenes in between each stage you complete. You’ll see Lupin ride in from off screen (in what honesty looks like a tractor due to how simple the sprite work is) and meet up with presumably Fujiko Mine. Then you'll usually be rewarded with a bunch of hearts and the opportunity to play more levels that increase the difficulty by adding in more people to avoid. While nothing about Lupin III will blow anyone away now, it’s incredibly fascinating in that it's essentially an early stealth game and quite possibly the first anime video game. 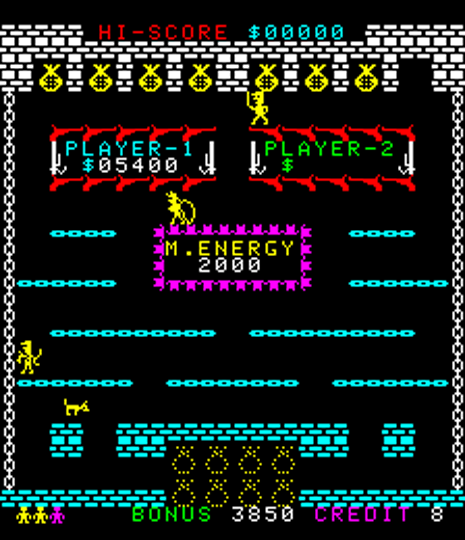 But this particular franchise wasn’t always treated with the same amount of respect. A few years later, 1983 saw the release of another influential game in Dragon’s Lair. Its claim to fame was its use of laserdisc technology to give the game full motion video and animation that was unmatched by anything else out in arcades. This would lead to other companies utilizing laserdiscs such as Data East’s Bega’s Battle, which was based off the film Harmagedon: Genma Taisen, and Sega’s Albegas or Cybernaut, which was also an anime adaptation of the series Lightspeed Electroid Albegas.

One of the more infamous games to come out of this time period was Stern Electronics’ Cliff Hanger. Lupin the 3rd fans will immediately recognize the footage from the game as it’s chopped up and reedited animation from The Castle of Cagliostro and The Mystery of Mamo. It’s also an early example of an American company taking localization to the extreme by renaming all of the characters and changing the plot. No, that’s not Lupin, that’s Cliff! He’s accompanied by his buddies Jeff and Samurai! Cliff Hanger plays similarly to other laserdisc games where you have to quickly react to what’s happening on screen and that determines if you keep playing or need to put more quarters in the machine. It’s a bizarre experience, but you can find the seeds of what will eventually become quick time events in these games. You might even argue that those laserdisc games could be seen as rhythm games. 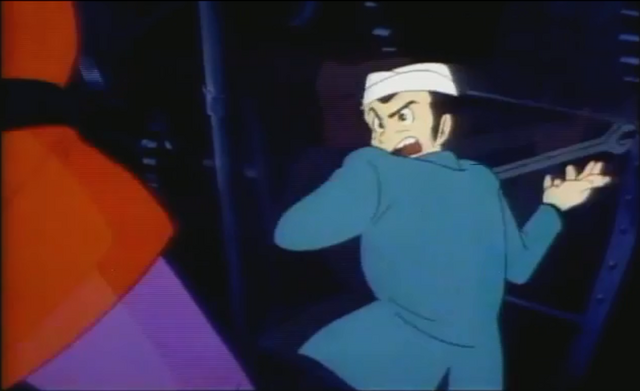 While the arcade scene thrived worldwide before the video game industry crash in 1983, consoles in Japan weren’t really a thing quite yet. However, they were a big market in early computers. This is where a large influx of anime adaptations began to take place. One series that really took to the new video game industry was Mobile Suit Gundam. There were two different Gundam games released in 1983 alone. One was essentially a Space Invaders clone put out on the Arcadia 2001 line of home computers titled after the series itself. It’s interesting from the standpoint of what an early Gundam game would look like, but outside of that, it wasn’t doing anything that other games weren’t also doing. 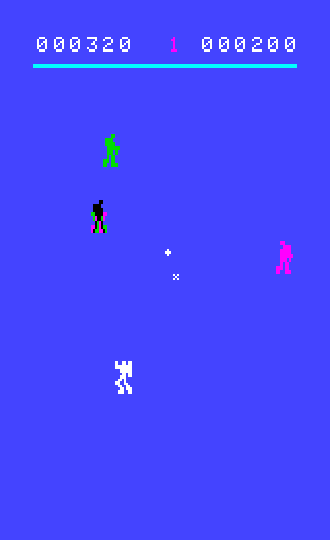 The other release in 1983 was for the NEC PC-8801 and would also come to the NEC PC-9801, Sharp X1, and the Fujitsu Micro 7 lines of Japanese home computers. Kidou Senshi Gundam Part 1: Gundam Daishi ni Tatsu is absolutely wild to look at. The box art describes the game as “ROLE-VENTURE” since this was before genres were more firmly established. It’s mostly an adventure game, but also includes shooting segments that blend both genres together. The adventure segments look more in the vein of what visual novels would later come to look like and for 1983, those parts are almost mind boggling with how they’re able to make the characters look like they did on TV. A sequel would be released in 1984 that kept the same style and added more shooting portions to round out the gameplay.

Before Nintendo's release of the Family Computer that would take the world by storm and help bring the video game industry back from the brink of death in America, the Japanese home PC market embraced anime adaptations. Series such as Golgo 13, Doraemon, Kinnikuman, Wing-Man, and the others mentioned above all saw games released across the wide swath of different Japanese PCs. The Famicom and pretty much every console after that would also become home to numerous anime games, possibly starting with 1985’s Choujikuu Yousai Macross. Fun fact: That was the first time Bandai and Namco would collaborate together, predating their merger by 21 years. 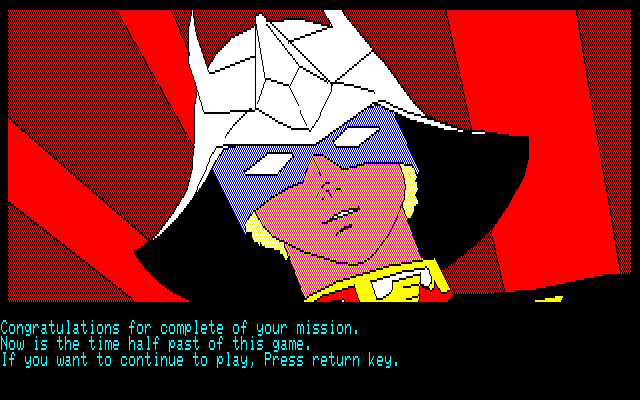 We are inching closer to the fortieth anniversary of anime video games, so that begs the question: What have current games taken and learned from these very early adaptations? Anime games today are incredibly varied with what genres and gameplay they decide to use, and even just looking at the small sample size we used here, that variety was prevalent in the ‘80s as well. Those early games were innovators in their field with gameplay and visuals which is also happening today with games like Dragon Ball FighterZ giving us an amazing visual style that looks super remniscient of the anime it's based on. Plus, think of how many games use anime cutscenes and how long that’s been going on. Without those laserdisc games, would that have become a trend when CD-based technology took off? Okay, probably, but laserdiscs showed developers that it was possible and could be a fun inclusion to their games.

Even visual novel games, which took off in popularity in the ‘90s, have a deep rooted legacy in early Japanese PC adventure games such as Kidou Senshi Gundam Part 1: Gundam Daishi ni Tatsu. What makes this all pretty sad though is the fact that a lot of the games we’re discussing just aren’t available today. That’s an industry-wide problem, but how cool would it be to have Lupin III playable whenever you wanted on one of the consoles you already own? These are influential games in their own right and the anime games we have today owe a lot to them, so it’d be great if they were more readily available. So, on this year’s Video Games Day, let’s salute those anime games that set the standard and laid the framework for the industry that we know and love today.

What's the first anime video game that you remember playing? Which anime would you like to see become a video game and what type of game would you want it to be? Let us know in the comments below!

Do you love writing? Do you love anime? If you have an idea for a features story, pitch it to Crunchyroll Features!
Tags
video games day, video games, lupin the third, mobile suit gundam
« Previous Post
Make Your Monster Grow with Pokémon Sword & Shield's New Ability
Next Post »
Cells at Work! and Pocari Sweat Team up to Help You Stay Hydrated
Other Top News
6 Comments
Sort by: