At last, the burning question of which anime Crunchyroll users the Vatican watched the most between 2010 and 2019 has an answer. 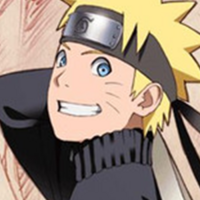 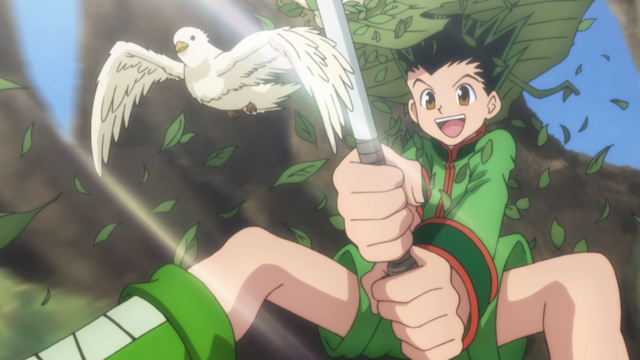 We are mere hours before the end of 2019, which means we’re also just about to close out the 2010s. With the end of the decade within our grasp, we on the Editorial team thought it would be fun to look at some of the viewing habits and trends of our lovely Crunchyroll users over the past 10 years.

In this article, we’re taking our viewership-by-country map and showing which anime was watched the most during the last decade in EVERY. SINGLE. COUNTRY. Let’s see which anime each country loved the most over the past decade. Throw on your hiking boots and take my hand as we go on an anime world tour together! 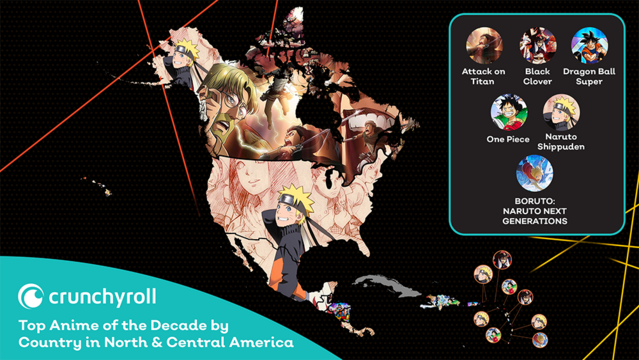 Naruto, Naruto, Naruto. The Seventh Hokage can stand tall knowing that he is beloved not only by the US and Mexico, but a whole host of others like Puerto Rico, Panama, and about 10 more. There’s a phrase we use a lot around the office–“Crunchyroll is the house that Naruto built”–and that’s honestly really true! Shippuden was not without competition, of course. Luffy literally became a pirate of the Caribbean, with One Piece showing up in the Dominican Republic, Jamaica, and Barbados. Neighboring island nations saw the Straw Hats’ shonen colleagues with Black Clover in a few countries including Anguilla, and BORUTO laying claim to Haiti and St. Vincent & the Grenadines. Taking a jump up North, our friends in Canada were quite the holdouts, being the only country that watched Attack on Titan the most. The scouts couldn’t oust Naruto from the throne, despite valiant efforts. Growing into a kind, responsible, loving person, achieving his dream of becoming Hokage, and now taking over the majority of North America–Naruto Uzumaki is a truly unstoppable force. 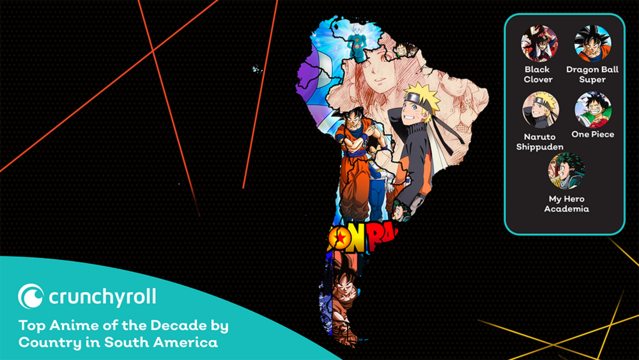 While it may appear that we have another Shippuden-heavy region, that’s mostly thanks to the sheer geographic area of Brazil. In reality, we only have three countries where Naruto took the crown (and NONE where Boruto won!). The real MVP here is Mr. Shonen himself, Goku. Starting at Venezuela and Colombia, Dragon Ball Super makes an unbroken victory down the western coast of South America, through Ecuador, Peru, Chile, and numerous others along the way. Getting a new sequel to the Dragon Ball franchise was a truly historic event for anime. For many of us, Goku and his friends were the first characters to welcome us to the world of anime. Dragon Ball Super felt like coming home for many of us, and the fact that it was really, really good makes that return all the sweeter. 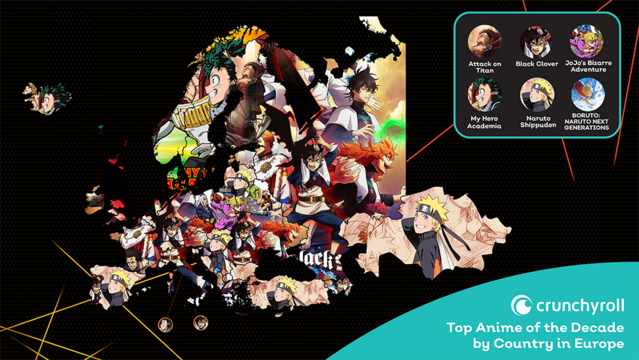 Oh wow! Contrary to the Americas, Europe has no obvious winner, and many of the anime are well represented by multiple countries! Again, Shippuden makes a very respectable showing with Spain, Switzerland, Slovenia, and, interestingly, more ‘S’ countries. My Hero Academia gave our orange boy a run for his money with comparable representation. Users in the Vatican favored Academia, which makes me hopeful that at least a few priests and nuns are keeping up with Class 1-A. But despite Deku’s best efforts, Asta’s unending determinism can be seen through more countries favoring Black Clover over any other anime. Despite its relatively recent beginning in the Fall of 2017, Black Clover’s tale of unending perseverance and growth has become a mainstay in the shonen heavy hitter lineup. Asta and his friends have been embraced by the anime community, and, luckily for us, the series isn’t going away any time soon.

Russia, a titanic country that spans two continents watched Black Clover more than any other Crunchyroll anime. We should keep in mind here that Crunchyroll was only recently rolled out in Russia, so there is a recency bias. This advantages Black Clover over other long running series that were airing in the earlier part of the decade–namely Shippuden.

It must be noted that the tastemakers of Poland and Belarus are the first countries on our tour to have watched JoJo’s Bizarre Adventure the most in the past decade. Truly, two neighboring countries comprised of anime fans of the most refined tastes. 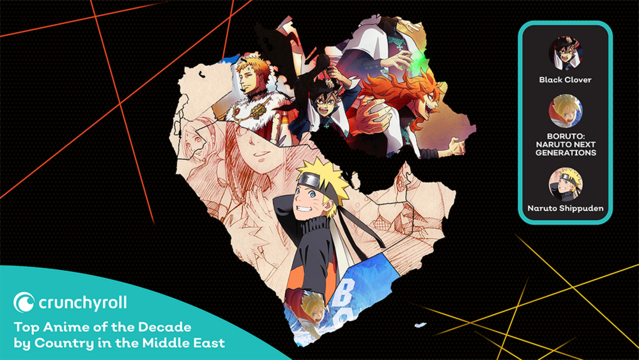 Contrary to their European neighbors, our users in Middle Eastern countries had a very clear cut preference. As with North America, Naruto Shippuden was the series of choice for Saudi Arabia, Pakistan, the United Arab Emirates, and a bit more than ten others. Our boy is coming in clutch again. Black Clover made a showing in Iran and Iraq, and BORUTO ended up being Yemen’s favorite of the decade. Interestingly, the anime that show up in multiple countries always occur in contiguous countries. I guess Naruto and Black Clover fans truly do stick together!

Overall Most Popular in the Middle East: Naruto Shippuden 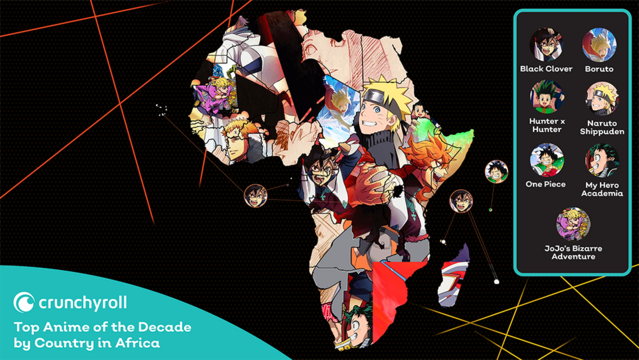 And we have another clear-cut winner! Our users in African countries had a pretty clear cut preference for Black Clover, being represented by a tens of countries including Ethiopia, Kenya, Madagascar, Mali, Rwanda, and the Democratic Republic of the Congo. Coming in second is our stalwart Shippuden, showing up in Egypt, Nigeria, Sudan, and a few others. South Africa refused to conform and favored My Hero Academia above other anime. 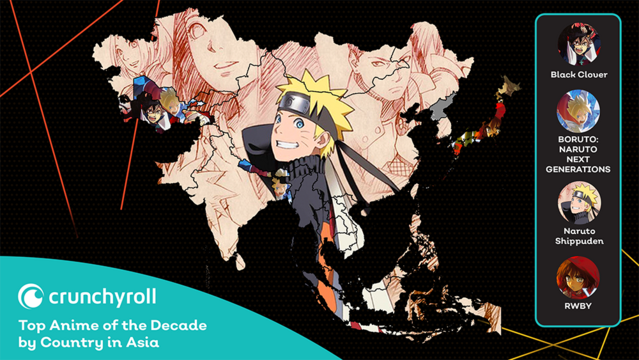 Welcome……… to the world of Shippuden. If you thought North America and the Middle East had a lot of Naruto, Asia has both beat. In one unbroken, continental swath, Shippuden stretches from Kazakhstan in the northwest, east through India, Nepal, and China, and then down Southeast Asia through Malaysia, the Philippines, Indonesia, and countless others. The global influence of our favorite ninja really can’t be overstated, and that holds true for the region closest to the series’ country of origin–which, itself is rather interesting, but we’ll get to that.

There are, of course, some holdouts. The contiguous trio of Turkmenistan, Tajikistan, and Uzbekistan favored Black Clover (the former two), and BORUTO (the latter). Now we need to talk about the elephant in the room. Japan, the country that invented and is majorly the origin point of most anime, watched RWBY, an American-made series, more than anything else. While a big part of this is the fact that most anime viewing in Japan doesn’t happen on Crunchyroll, the viewership of RWBY in Japan is actually quite impressive. Anime is becoming a truly global industry and fandom, and the fact that the country that invented anime has embraced a foreign animated series is a pretty beautiful indication of this. 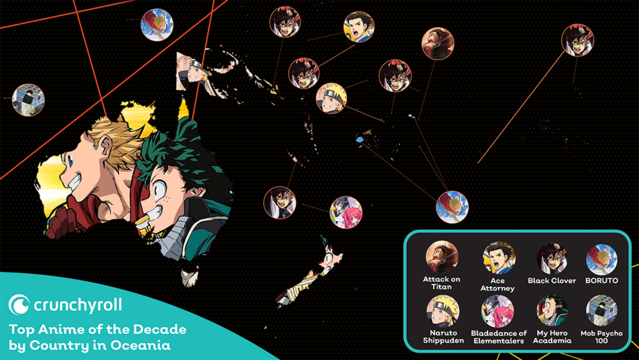 Oceania is comprised of an extremely diverse set of island nations, and that diversity showed up in our results in some very cool ways! We’ll start with the largest member of the region, Australia, and neighboring New Zealand. The Aussies and Kiwis both favored My Hero Academia and were actually the only Oceanic countries to do so besides the US Minor Outlying Islands. Shippuden and BORUTO made appearances, of course, with the former showing up in Papua New Guinea and Guam, among others, and the latter hitting the quartet of Fiji, Niue, Palao, and Samoa.

Heavy hitters aside, Oceania had some fascinating one offs. Micronesia’s favorite anime was long-running shonen series Fairy Tail, Nauru favored the lawyer video game adaptation Ace Attorney–the only non-action oriented title on this map–, and Norfolk Island favored Bladedance of the Elementalers–the only series with an episode count in the teens. 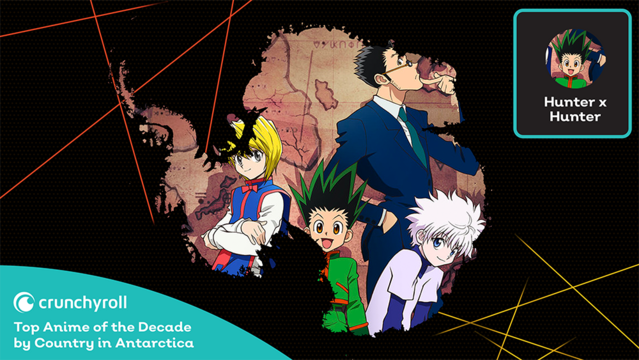 We’ll end our journey with one of the largest, most sparsely populated regions on earth. Antarctica.

Yes, against all odds, we did have some video views recorded from users in the land of ice and snow. Regrettably, the most watched show here was not A Place Further Than the Universe. The winner, however, was fan favorite shonen series Hunter x Hunter! Truly, one of the best anime arcs of all time has to be Chimera ANTarctica. THANK YOU, AND GOODNIGHT.

Oh, and for good measure, here's the final score:

Tags
decade in review, naruto shippuden, boruto: naruto next generations, hunter x hunter, attack on titan, black clover, one piece
« Previous Post
In 2019, Sarazanmai Taught Us How to Live in the Next Decade
Next Post »
Three Kingdoms Collide in Fate/Grand Order Camelot PV
Other Top News
50 Comments
Sort by: