No man is an island ... But that doesn't mean he can't try 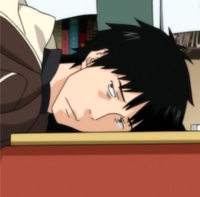 From the outside, the chronic shut-in is a plain nobody, a stranger lost to his own bedroom and hidden from public sight. He truly might as well not exist. But like the classic song from the broadway musical comedy Avenue Q begs to remind us: “there is life outside your apartment / but you've got to open the door!” Get out there and see the world, be an actual person seems to be the advice here. Take the shut-in life to an extreme and you got yourself a spanking serious disorder. This is the plight of the hikikomori in a nutshell — a condition that compels people to remove themselves entirely from society, one largely present in Japan and now increasingly elsewhere.

Many anime have taken to task the subject of the hikikomori, particularly those about young protagonists who have adopted a reclusive lifestyle. That doesn’t necessarily mean they’re anti-heroes, but they're not exactly the most user-friendly main characters either. Do they just hate people because they're shut-ins? Or are they insufferably insecure? Or maybe — they know something we don't. A conspiracy? Total enlightenment? 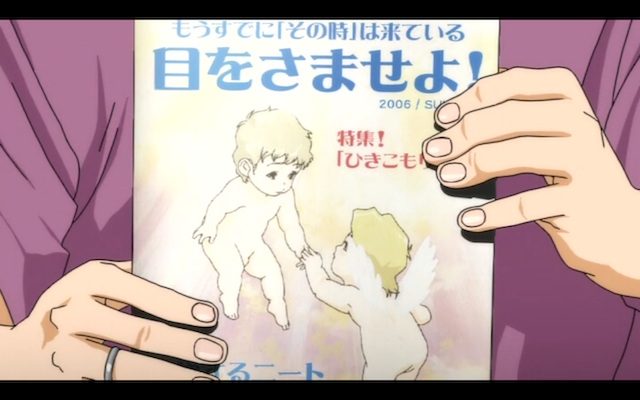 The “hikikomori hero” may seem like an odd choice of protagonist. In the broadest sense, they're usually portrayed as sympathetic geeks by design. But again, there’s no need to generalize: not all hikikomori are into games, manga, and anime. Still, there are countless series about the subject of anime fandom and eccentric personalities, including many with decisively dark humor. However, before fully arriving at the hikikomori hero, there was anime's own distorted perception of unsavoury nerdiness in the early '90s — one more ironic than depressive. 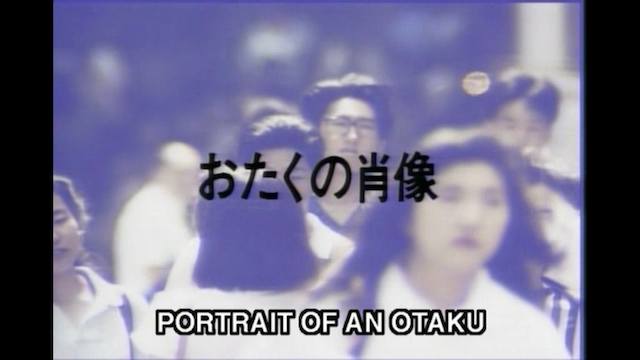 A Room of Their Own

The most notorious example of this self-awareness is Gainax’s classic 1991 OVA series Otaku no Video, which famously included mockumentary footage of actors (Gainax staff and friends) playing hardcore nerds. These surreal segments are titled “A Portrait of an Otaku.” Gainax, best-known as being one of the most trope-savvy of anime studios of the nineties, produced these segments as dark comedy bits to break up the main story segments about a college student whose only goal in life is to become a hyperbolic lord of the geeks. The choice to include these mock interviews begs to ask what would happen if you showed self-loathing geeks as they truly saw themselves: as reclusive homebodies only interested in swapping VHS tapes of obscure anime and collecting merchandise. These segments hint at a keen interest in the dark realities of this side of nerd culture, accompanied with an ironic wink-wink that, of course, these actors are no better off than the viewer themselves. It’s never directly stated these mock otaku are actual recluses, but nonetheless their dark rooms and obsessive personalities give a strong prelude to the nerd-hikikomori archetype to come. 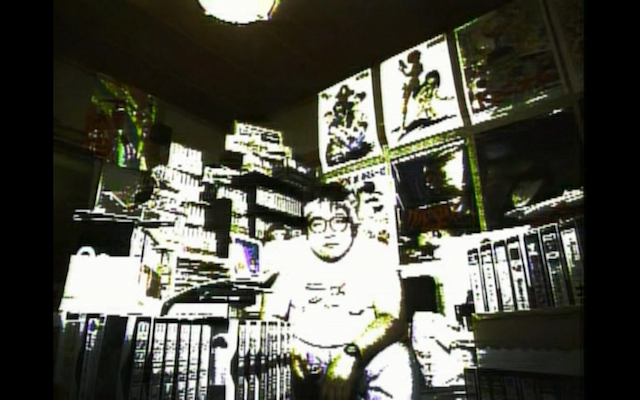 Who is the hikikomori hero and why should we care about them? In brief, we might just want to scratch that narrative itch of seeing someone with similar interests “get better” and redeem themselves. A few choice series have already seriously banked on this arc. Welcome to the N-H-K, originally published as a light novel written by author Tatsuhiko Takimoto, was adapted into an anime series by studio Gonzo (which was also founded by former Gainax staff in 1992). Unlike Otaku no Video’s peppy anime club characters, Welcome to the N-H-K takes place in the early 2000s and is far more concerned with personality disorders than Gundam model kits. Its protagonist, Tatsuhiro Satō, doesn’t necessarily start off as the relatable otaku-type, but gets wrapped up into the subculture inevitably thanks to a friend. Satō is incredibly self-loathing and compulsively relishes in the utterly lascivious aspects of his life. A far cry from the ironically mimetic "Portrait of an Otaku" bits, the fourth wall here might as well be a dark ugly void staring back at you. 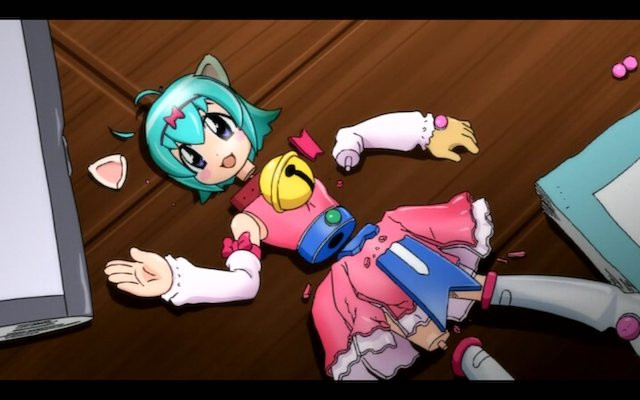 "Toys in the attic, I am crazy / truly gone fishing / they must have taken my marbles away"

From Zero to Hero

The hikikomori hero usually has rejected society after a traumatic experience. They totally negate the extrovert tendencies we anticipate in traditional heroes. But stories like these fictionalize a very debilitating and real disorder in an attempt to humanize an otherwise invisible population. The value of the hikikomori hero is that they are rarely sugar-coated. Satō is very much a tabula rasa and lets us project onto him. Of course, he’s not so much of a repulsive outcast to push away old friends who want to re-connect, nor is he totally opposed to reconsidering his relationship to women. His positive character development is rocky and rife with difficult conversations, painfully awkward encounters, and lots of self-internalized negativity. It’s not easy. It’s not supposed to be easy to like a hikikomori protagonist. But they’re making an effort to change — so why can’t we change ourselves? 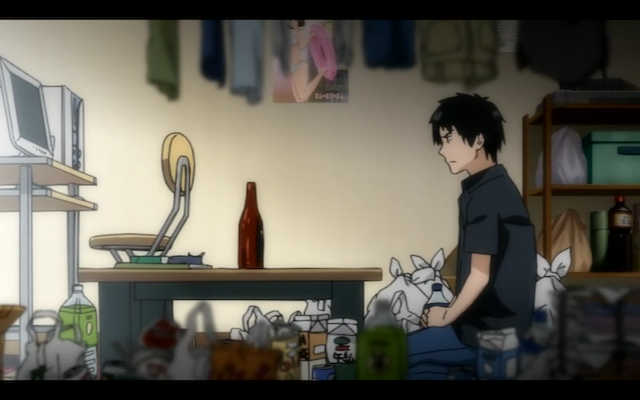 Satō in his trashed hikikomori room

More recently, Mari Okada’s serialized novel Anohana: The Flower We Saw That Day tackles similar subject matters from a slightly more sentimental perspective. Adapted into a series by A-1 Pictures in 2011, Anohana has practically become synonymous with the contemporary hikikomori redemption story and adolescent angst. And like Takimoto’s own hikikomori experience writing Welcome to the N-H-K, Okada was similarly inspired by her own experiences as a young shut-in while writing Anohana.

Anohana follows teenager Jinta Yadomi after the unexpected passing of his childhood friend nicknamed Menma, a sweet girl who happens to now haunt him as a ghost. Only until after Jinta reunites his childhood group of friends who have drifted apart is Menma ready to pass on — finally giving everyone peace of mind as they graduate to the next phases of their lives. It's bittersweet and at times incredibly raw, but brighter (both story-wise and visually) than many other self-punishing hikikomori stories. Still, it's not a breezy fairy tale of shut-in redemption. 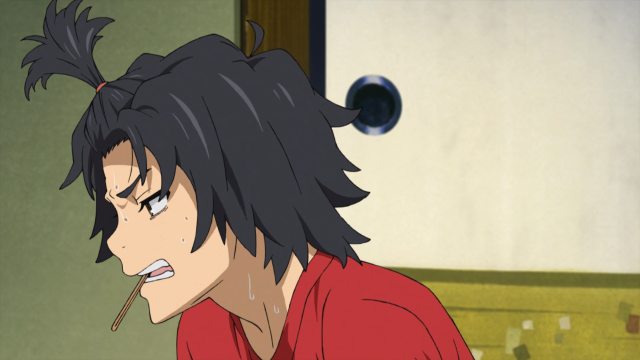 In 2017, Okada published her autobiography How I Went from Not Going to School to Writing Anohana and The Anthem of the Heart, a tell-all about her entrance into the animation industry and her teen truancy. Okada's reflection on her own past and inspiration for Anohana's story gives insight to perhaps why her hikikomori protagonist is more empathetic than he ought to be. After all, writing from experience often doesn't leave much room for ineffective embellishment. Unlike Satō, Jinta very clearly identifies his "stress" and "trauma" by the first episode. He admits something went horribly wrong and that's why he's a depressed high school hikikomori. By the time Jinta accepts the root of his hikikomori compulsions, he's inevitably ready to help his friends process something as delicate as mourning a childhood friend. His narrative resolution doesn't solely come from admitting he has a problem: it's just the beginning of stepping out of fantasy into reality. It's about accepting bad things happen and that you must move on. 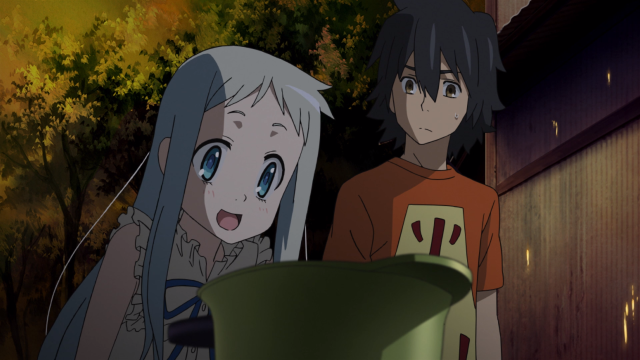 Jinta and Menma gather together with old friends

The hikikomori hero isn't defined by despair and hopelessness. He starts in the best-case scenario for a redemption arc: rock bottom. The shut-in has to learn not to only leave his apartment, but to open the door to his heart to others — as sappy as that might sound. He's an everyman in the end, and surprise, not a depraved freak because of his hobbies. Under that gloomy guise of ennui and loneliness is someone who finds the power to change, first with baby-steps and then in strides. It's not a glorious or spellbinding journey — but it's as real, complicated, and honest as any real hero's story gets.