Here's Why You Absolutely Need to Catch Up On My Teen Romantic Comedy SNAFU!

With its third and final season fast approaching, let's explore what's so special about My Teen Romantic Comedy SNAFU! 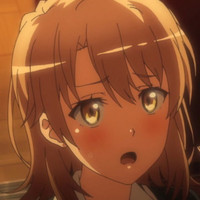 Hello everyone, and welcome back to Why It Works! As I’m sure you’re well aware, the Spring anime season has turned out to be a pretty light one, and the Summer season is looking to follow suit with plenty of shows already suffering from cancelations or delays. However, there is one show coming up that I’m profoundly excited for — one that was actually intended to air back in the Spring and one I’ve been eagerly awaiting ever since it was first announced. Today on Why It Works, let’s break down why you should be excited about My Teen Romantic Comedy SNAFU’s third season! 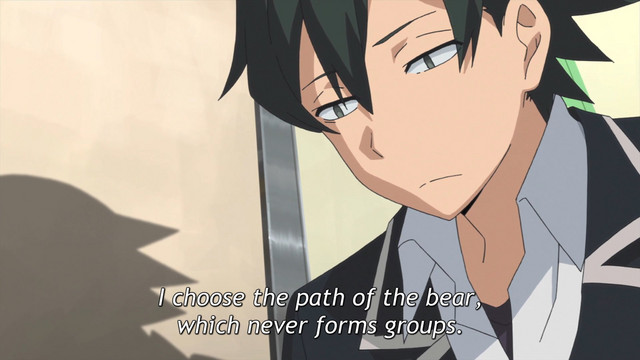 On its surface, SNAFU offers a pretty routine premise. Centered on a young, isolated high schooler named Hachiman, the show opens with him cynically breaking down the social dynamics of the classmates around him until he is ultimately conscripted by his teacher to join a club that helps students with their personal problems. There, alongside the equally cynical Yukino and upbeat Yui, he works to solve conflicts using his almost nihilistic understanding of human psychology. Combining psychological drama, romance, and plenty of humor, Hachiman’s journeys carry him far from his initial cynicism, as he learns to express genuine vulnerability, and both the joy and terror of caring for others.

As I said, SNAFU is exploring territory that isn’t terribly uncommon within anime, and Hachiman himself starts off as a pretty nasty guy. So what makes SNAFU so special? 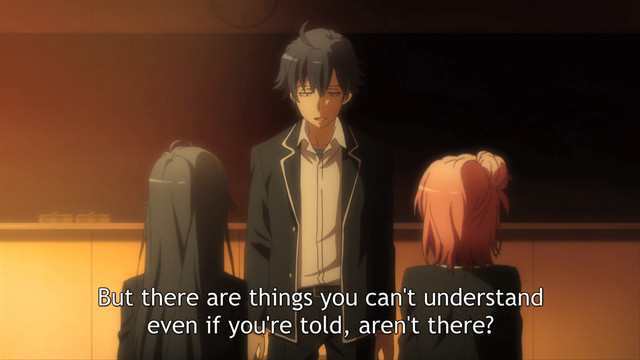 First off, Hachiman’s own journey across SNAFU’s first two seasons has turned out to be one of the most complex and rewarding character journeys I’ve seen in animation. Nothing about Hachiman’s initial cynicism feels artificial or unreal in any way — and in fact, his understanding of human motivation is pretty sharp even from the start. But as his journey continues, he begins to append new understandings to his initial, defensive worldview, as he develops genuine friends and learns there are even people who might appreciate his brutal honesty. Hachiman feels like a fully developed human being, and also an avatar for anyone who might feel unloved by their community, or cynical about the nature of human relationships.

Hachiman is not the only character SNAFU graces with such complexity and depth. SNAFU possesses a multifaceted and sympathetic supporting cast, full of characters whose unique strengths and personal weaknesses demonstrate an author who is clearly fascinated by human nature and possesses great empathy for all people. Characters in SNAFU don’t do things for stupid reasons or fall into drama for the sake of drama — their conflicts are based on core disagreements and long-held insecurities with clear reasoning and sympathetic motives on all sides. 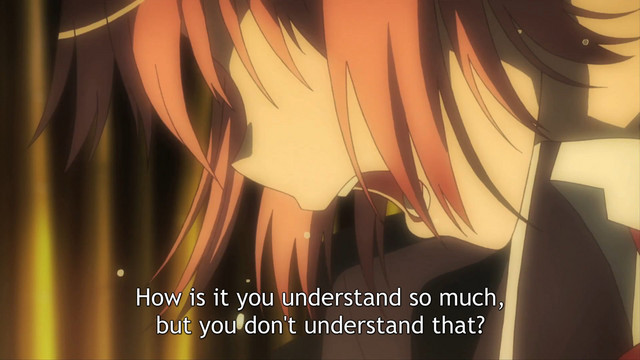 The fact that SNAFU’s characters are so richly composed directly informs the show’s next strength: its insightful investigations of the psychology of high school, and human nature more generally. Though Hachiman is often needlessly cynical, he also frequently offers genuine insights — and when he’s wrong, he’s wrong in ways that reflect on his own psychology, as well. As SNAFU expands beyond his initial attitudes, it begins to offer more and more genuine truths about human nature, with its whole cast taking hard-fought steps toward self-love and vulnerability. In its grounded, steadily inquisitive way, SNAFU manages to secure a place among classic psychological dramas like Evangelion or Monogatari.

Of course, a show focused entirely on psychological inquiry would probably feel pretty dry — fortunately, the show also has an excellent sense of humor and electric chemistry across its central cast. Both the black-as-midnight cynicism of SNAFU’s early episodes and the genuine character bonds of its later drama are elevated through constant gags, while the squabbling shared by Hachiman and Yukino places them among anime’s best bickerers, bringing to mind couples like Lawrence and Holo, or Okabe and Makise. 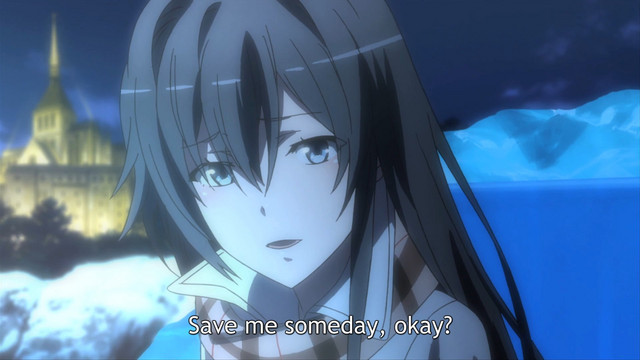 But even as Hachiman and Yukino develop such great chemistry, Yui remains the heart of the group, taking care of her friends even in their darkest moments. As a result, SNAFU is able to build up a love triangle where no one feels like an odd person out, and you genuinely don’t want anyone to “lose.” All of SNAFU’s leads end up caring for each other in poignant, meaningful ways, with the ways they provide for each other making it easy for us in the audience to love them, as well.

Along with its excellent writing, SNAFU is also blessed with excellent art design and direction. While its first season is frankly so-so visually, the show experienced a wholesale shift in studio and production team between its first and second seasons, with the extremely talented Kei Oikawa signing on as director. As a result, Season 2 is blessed with consistently evocative cinematography and plentiful moments of intimate, carefully realized character acting. And with Oikawa and his talented crew returning for Season 3, I have every expectation this will be the show’s finest season yet. 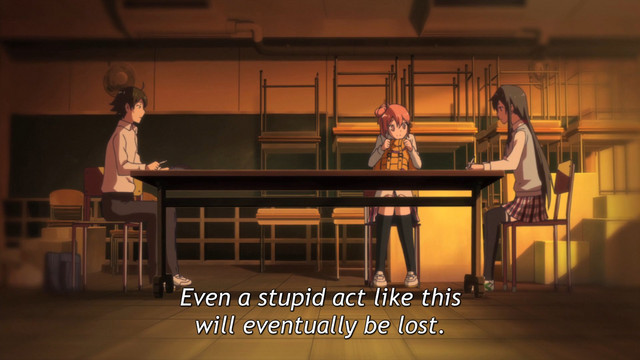 Finally, one of the things I’m oddly most excited about regarding this season is that this is the final season. The light novels have already concluded and there’s just enough material remaining to fill a season, meaning Season 3 will truly be the end of SNAFU. Rather than petering out with an adaptation that eventually stops covering ongoing material, SNAFU is going to finish strong, with a third season that actually offers a conclusive ending to Hachiman’s story. With only a couple weeks left until the Summer season begins, this is the perfect time to step onboard and catch up on all the SNAFU you’ve missed.

I hope you’ll join me in watching SNAFU next season, and for those who’ve seen it before, please let me know your own favorite parts of this great show in the comments!