Can a cute dress save the world? Yes 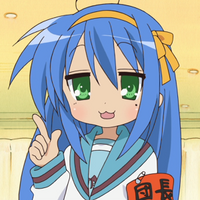 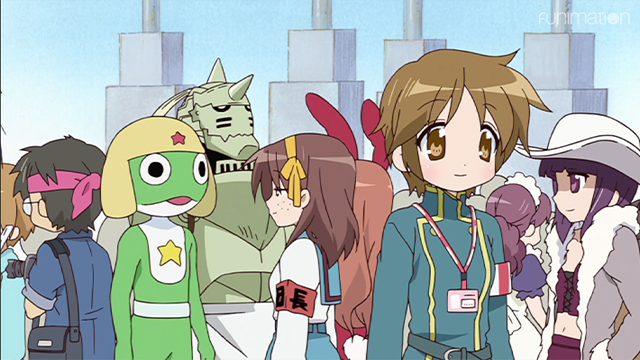 Ever since the premiere of the mega-hit The Melancholy of Haruhi Suzumiya in 2006, Kyoto Animation (affectionately called KyoAni) has had a special place in the hearts of anime’s most die-hard fans. For as eclectic as KyoAni’s catalog may be, long-time fans of the studio return time and time again for that special KyoAni touch — meticulous attention to detail and great animation. But besides a clearly apparent passion for their projects, what else could be so attractive to the shared universal magic of KyoAni shows? One word: Cosplay.

Screw the Rules, It Has Frills!

A shortening of the term “costume play,” cosplay most commonly refers to dressing up as a specific character. In a more generalized sense, it can also just mean wearing an outfit you wouldn’t normally associate with day-to-day life (such as a french maid dress or even a different school uniform). A healthy handful of KyoAni shows have displayed an especially powerful affection toward cosplay: Haruhi herself famously dons a bunny girl outfit during a school concert, Konata from Lucky Star works part-time at a cosplay cafe (as Haruhi), K-ON’s Hokage Tea Team is supported by their cosplay-obsessed advisor Sawako, and Tohru of Miss Kobayashi’s Dragon Maid is inspired by the magnificent power of Akihabara maids and Kobayashi’s own otaku tendencies. 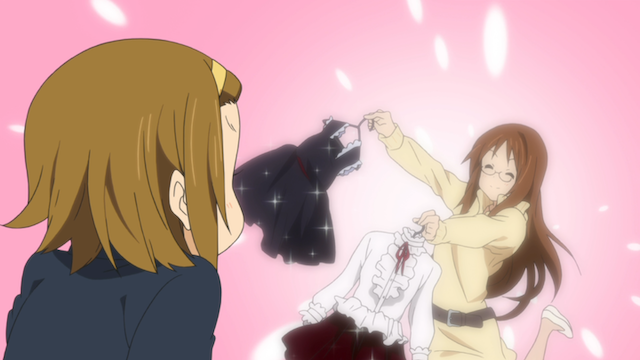 Consider your average high school ecosystem — pretty plain on the outside, (mostly) normal on the inside. Previously mentioned shows like Haruhi, Lucky Star, and K-ON! feature characters with uniforms. Even if those uniforms are cute, they’re still a symbol of conformity. Nothing is particularly anarchist about a sailor fuku. And yet, characters like Haruhi, Konata, and even Yui stick out for their quirks. For Haruhi, it’s all about aliens, finding a bigger truth out there. Konata, her otaku love for anime and games. Yui? Classic goofiness. If they aren’t hopelessly easy-going, these uniform-clad girls certainly aren’t boring wallflowers, either. If something truly world-changing is just around the corner, it's usually not very obvious on the surface. What can possibly be done to truly show the world these aren't just your average teens?

Cat Ears of Her Own

Enter the world of cosplay, bunny ears, maid dresses, and having any reason possible to break dress-code. The power of KyoAni’s love for cosplay isn’t purely for the sake of cuteness, or fanservice — but rather demonstrating that anyone (even you!) can access your wildest fantasies. Maybe even a little power trip or dumb laugh, as a treat. To bend reality, you gotta bend expectations first. This is the life-changing magic of cosplay: making even the most mundane scenario unique all with a simple wardrobe change. 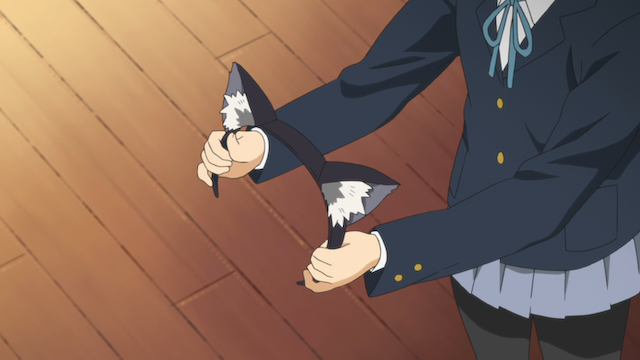 It's dangerous to go alone! Take this.

Of course, the otaku appeal of cosplay is obvious. Cosplay itself is practically synonymous with conventions, fandom, and the desire to bring a beloved character to life. Tohru, especially, is introduced to the zeal of maid fandom through a trial by fire via Kobayashi’s training. No one in Hokage Tea Time dares don cat ears until their crazed advisor Sawako mysteriously materializes them. These cat ears practically snatch their newest recruit, Azusa, into band practice with their cute charm. Characters like Konata offer themselves as a strategically placed audience “everyman,” a nerd just like you! But again, Konata isn’t simply doing cosplay for the sake of cosplay — she applies that otaku dedication to saving enough to buy merchandise to justify a cosplay job. The intent to cosplay isn’t so much about fanservice as it is to convey a certain genre savviness of the cast. If anything, these characters might as well be our peers. 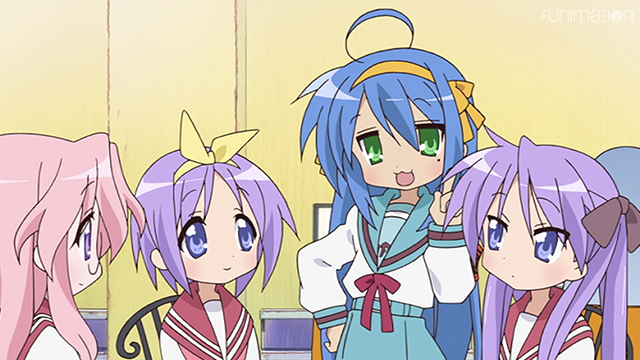 Konata cosplaying as Haruhi at a cafe, offering her sage otaku wisdom (image via FUNimation)

Of course, Konata famously cosplays as Haruhi in her signature school uniform. In Lucky Star’s first episode, Konata discusses the mixed feelings she has about characters having different voice actors in drama CDs versus broadcast anime adaptations. In another episode, Konata tunes in late at night to watch the latest Haruhi episode, only to find viewers criticizing it minutes later online. These jokes are reminders that Aya Hirano voices both Haruhi and Konata, effectively breaking the fourth-wall by riffing on popular otaku culture. Konata is an opinionated otaku with strong feelings about voice actors — while also regularly cosplaying as a character obsessed with science fiction. In these cases, cosplay isn’t just a funny wink and nudge, but builds up situational irony, a pointed acknowledgment that KyoAni fans love KyoAni in every way imaginable.

No Cosplay, No Life

Classical cosplay tropes, like maid dresses, catgirls, and school uniforms, are built into the narrative of many KyoAni shows. Azusa, for example, is offered cat ears as part of her induction to Hokage Team Time and is dared to "nya" by her swooning seniors. Haruhi and friends famously sing their performance of “God Knows” in full cosplay, with Haruhi herself dressed as a bunnygirl, Mikuru as a maid, and Nagato as a witch. This scene, in particular, is partially animated with rotoscope technique, fully capturing life-like instrument playing gestures in homage to the 2005 high school band film Linda Linda Linda. While the film’s climatic culture festival concert is performed by schoolgirls in their uniforms, KyoAni ups the ante by adding cosplay to the mix. The juxtaposition of realistic singing and instrument playing accompanied by the fantastical outfits arguably isn't unintentional — reality and imagination seem to mesh together, creating its own bold and explosive swansong. Without this attention to detail, this iconic sequence would've likely lost some of its high-energy bite. 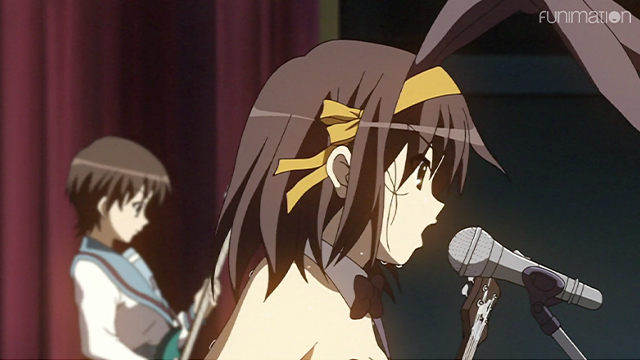 In get-up that would get more traditional students expelled, Haruhi and companions step into the fantasy world she’s been so desperately pursuing. Even if just for a moment, they have it all. Said episode even begins on a parody, low-budget alien-maid-girl home video of Mikuru cosplaying as a bunnygirl. This passion for temporarily breaking reality is seen once again in K-ON’s own culture festival concert episode, where the viewer is presented with a faux-music video of the band escaping police pursuit in the desert. While these scenes would of course be great sans the cosplay, the colorful visual language of these eye-catching outfits makes these moments all the more climatic. 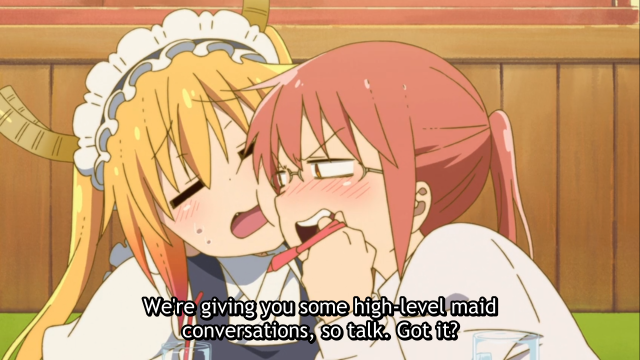 Besides being a quick and easy way to cuteness, KyoAni’s long-lasting love affair with cosplay is inseparable from the due diligence each of their adaptations are given. Rather than simply present a character in an unusual outfit, we’re given a dramatic, sometimes even otherworldly presentation tying it back to story. Whether that be in the school auditorium, or as a fire-breathing maid. KyoAni’s desire to do right to the source material is evident in their talent for treating cosplay as a uniquely powerful storytelling device. A costume change might not change the world, but if done just right, it can absolutely make anyone's dreams feel possible.

Blake P. is a weekly columnist for Crunchyroll Features. He would like to try eating Tohru's tail. His twitter is @_dispossessed. His bylines include Fanbyte, VRV, Unwinnable, and more.