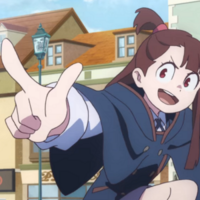 Once there was a girl named Luluco who loved a boy named Alpha Omega Nova. Her love for him was so strong that just thinking about him made her turn into a gun. But one day she learned that Alpha Omega Nova could not return anyone’s love. He was a hollow shell the whole time, a pretty face she projected an entire person onto. Luluco’s love for Alpha Omega Nova was a third-rate middle school love, the kind her dad might say she would one day grow out of. But to Luluco, that third-rate middle school love was the real deal. She would stake her life on it.

TRIGGER is a studio that has built its reputation on that kind of third-rate middle school love. Their body of work is studded with references to their favorite things — superheroes, Michael Bay movies, South Park, American cartoons, and video games. According to legend, the staff who created TRIGGER's first series--the bonkers comedy cult classic Inferno Cop--spent more time playing around with action figures than they did animating. That love goes both ways, too: studio employees were drafted to animate a nifty (but sadly unused) 2D credits sequence for the Toy Story short Toy Story That Time Forgot. Under the surface of homage, the roots of their Gainax past go deep. The emphasis on scale, heroes crossing their arms in space, the veneration of animation made by fans for fans. There are other Gainax expats in the industry, but none as loud or as prolific. 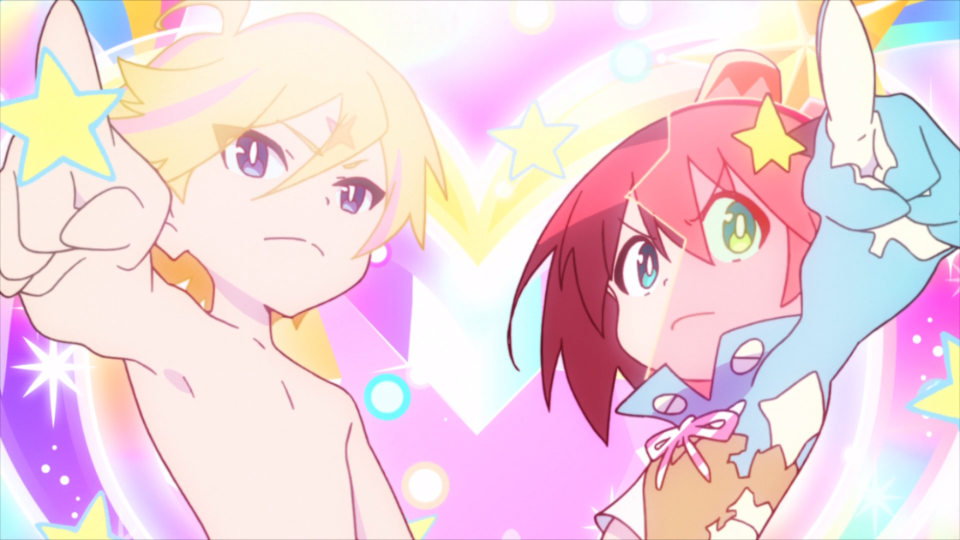 Trigger’s output is fixated on what it means to be a fan and what it means to be an artist. Akko, the heroine of Little Witch Academia, wants to become a witch just like her idol Shiny Chariot. But her peers look down on Shiny Chariot for being all flash and no substance, solely dedicated to entertaining the masses rather than impressing academics. Is Akko wrong for idolizing Shiny Chariot and chasing the nostalgic dreams of her childhood? Even Promare, far more concerned with the evils of Elon Musk and societal persecution, still finds time to contrast the blocky robots of humanity with the improvisational flame creations of the Burnish. Galo discovers that fire powers aren’t just a useful tool; they can be used to make your giant robot look much cooler. Now that’s rad!

The studio’s single-minded dedication to its staff’s interests can lead to some great episodes. Episode 4 of Little Witch Academia addresses fanfiction and the relationship between fans and the original author with refreshing candor. Episode 5 of Brand New Animal, besides being a very funny story about animals playing baseball, is also the tale of a man whose love of the game is poisoned by bad memories and societal cruelty. These episodes are effective because the animators and creative directors at TRIGGER are fans themselves. Rather than talk down to the audience, they’re in direct dialogue with them. 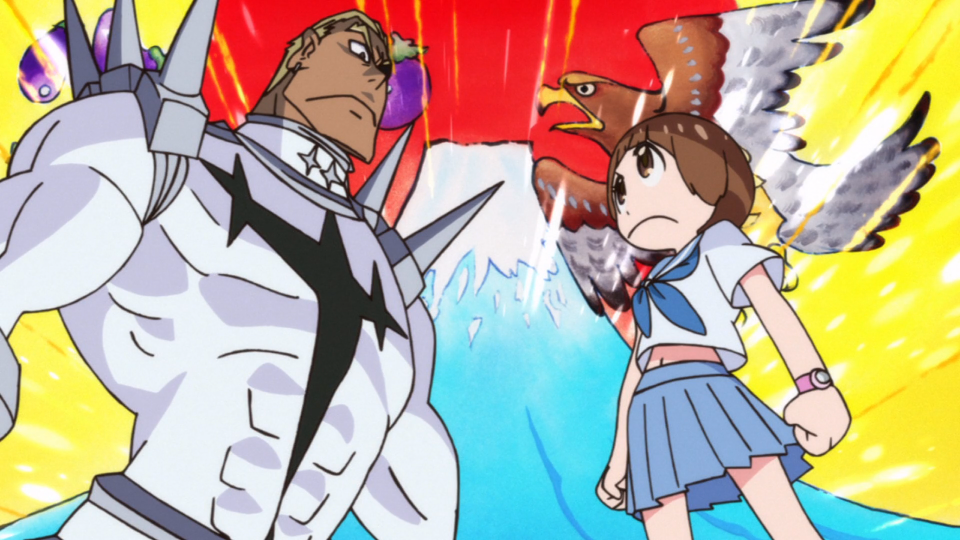 At other times, the studio’s fixation can seem counter-productive. A sentiment that comes up in Kill la Kill, Brand New Animal and Little Witch Academia is the distinction between fakes and the real deal — whether those fakes be teenagers in manufactured alien clothes, witches pursuing “frivolous” magic, or half-human-half-animal were-entities that exist between worlds. Heck, the penultimate episode of Kill la Kill is titled “Imitation Gold,” and climaxes with the heroes yelling that while they might just be faking greatness, they’re still good enough to win! TRIGGER is many things, but at this point, it is not an upstart. Promare did well for itself United States — earning $2 Million in the domestic box office — and the studio's now working with big names like Ultraman company Tsurubaya and games studio CD Project Red. There’s a huge audience buying the absurd pastiche that's the specialty of studio directors Hiroyuki Imaishi, Akira Amemiya, and Yoh Yoshinari. Surely if TRIGGER is playing with the big guns now, the wider staff could be treated with the same courtesy.

For me, the TRIGGER series that most successfully utilizes the studio’s burning passion to tell a story with real emotional intelligence is SSSS.GRIDMAN. The story reworks a cult classic tokusatsu series from the '90s, but never rests on its laurels. It packs every fight scene with shot-by-shot references to the work of mecha animator Masami Obari, but uses those fights efficiently to explore the characters rather than simply relive past glories. Most compelling of all is its villain, Akane, who would rather condemn others to die than face up to her own personal problems. At first, we hate Akane and the ease with which she hurts others. But slowly we learn that Akane loves tokusatsu dramas, just like we do. The monsters she creates are expressions of that love, and of her pain. If she pursues that love to forget her own fears and anxieties ... well, who among us isn’t tempted by escape right now? 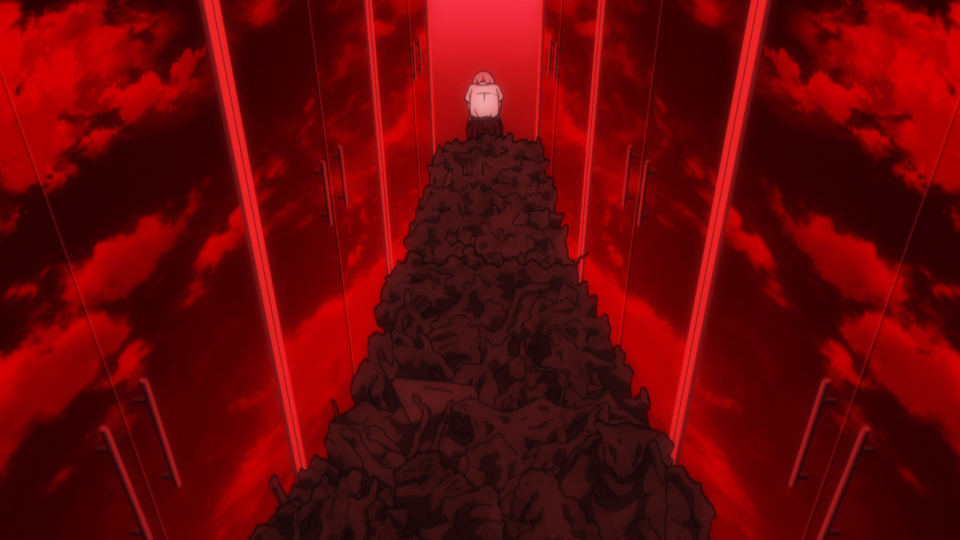 I remember how as a college senior, I’d sleep through a class I was auditing and catch episodes of Kill la Kill as they were posted (often without English subtitles) to Daisuki. Technically I was writing about the series on my friends’ blog, but really I did this because I was burnt out and wanted to see what happened next. I ended up not getting credit for that class, and to this day still have dreams where I relive the guilt over and over. Was it worth it? I think of Akane stagnating in her room. I think of Luluco chasing a bullet — that is, because this is an anime, her third-rate middle school crush himself — that she will never catch.

Even so. As the years have passed, Trigger has been there. I waited in line with friends to get a signed sketch from TRIGGER animator Yoh Yoshinari. I saw the first episode of DARLING in the FRANXX the same day I was convinced for ten minutes I would die from a nuclear bomb in Hawaii. And I’m excited to see the work of upcoming studio talent like Kai Ikarashi, or former employees like Takafumi Hori and Mai Yoneyama. Today I want to say happy birthday to Trigger, a studio that celebrates its inspirations no matter how rude or silly. Bring on SSSS.DYNAZENON!

Adam W is a Features Writer at Crunchyroll. When he isn't listening to "LAY YOUR HANDS ON ME" by BOOM BOOM SATELLITES, he sporadically contributes with a loose coalition of friends to a blog called Isn't it Electrifying? You can find him on Twitter at: @wendeego