"You're not a real blonde?" 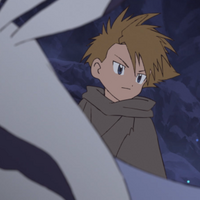 Toei Animation’s 2020 re-imagining of Digimon Adventure has not only brought back familiar faces, but also a whole new take on beloved characters. First airing in 1999, Digimon Adventure was created as an adaptation of the then-new Bandai Tamagotchi spin-off virtual pet franchise, Digimon. Since its original broadcast run from 1999 to 2000, the series has spawned various sequel series, movies, and OVAs, including the recent Digimon Adventure Tri. For the newly initiated, this soft reboot of Digimon Adventure is the perfect point of entry for those who never saw the original.

If you have a favorite DigiDestined, however, get ready for some changes. Of the chosen children, one is notably different: everyone’s favorite brooding embodiment of friendship, Matt.

A Lone Wolf After All? 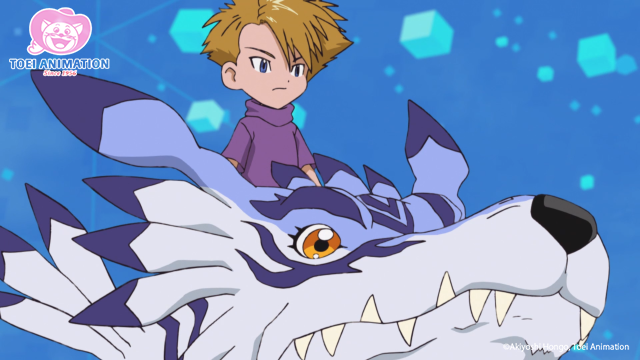 Matt appears in front of Tai in the Digital World

For Digimon veterans, the first few episodes of Digimon Adventure: (2020) start on a very different note compared to the 1999 original. By the first episode, Tai and Matt encounter each other in the Digital World. Except — Matt is already there by the time Tai arrives. Together they join forces and form Omnimon, a powerful Digimon created from the fusion of their partners Agumon and Gabumon. Does any of this ring a bell? This Digivolution first occurred in Mamoru Hosoda's 2000 Our War Game OVA, which chronologically takes place after the events of the 1999 anime. Ironically, the second episode titled “War Game” borrows the same premise of stopping a missile from landing in Tokyo. Rather than symbolizing the power of Tai and Matt's friendship after a long journey, this new version of Digimon Adventure presents Omnimon as proof of an untested alliance. Instead of starting from the beginning, it’s almost as though we’re starting from the end.

But this still begs the question — why is Matt already in the Digital World? Cool kid points? 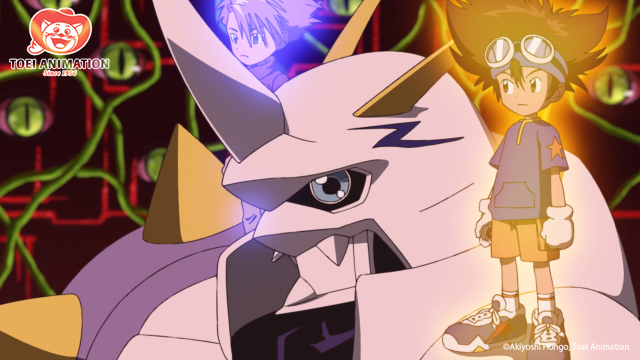 Compared to Tai and friends, this new version of Matt is an early bird. In fact, he's already shown riding Garurumon, Gabumon’s champion evolution. This suggests Matt might already have an established bond with Gabumon. This first impression of Matt — originally brushed off as a stereotypical “lone wolf” — offers us a fresh new take on what he has to offer.

In classic Digimon Adventure, Matt is first depicted hanging out alone, dubbed a "lone wolf" by Tai. As a self-appointed guardian for his little brother T.K., Matt is cautious but still impulsive, constantly butting heads with Tai. After being transported into the Digital World with the other kids, Matt slowly begins opening up to the others. He reveals to Tai that his parents were divorced and that protecting T.K. has become a huge part of his identity. But being so wrapped up in watching out for his brother, Matt takes it personally when T.K. starts growing into his own. What’s a lonely boy with a harmonica to do except moodily ride his wolf into nothingness?

Of all the kids, Matt is the first to break away from the group by choice in search of some soul-searching. After acquiring the Crest of Friendship — tags the Digidestined obtain to further their Digimon’s potential — Matt seriously begins questioning whether or not he has “grown.” A brief stint back in the real world before returning to the Digimon World to finish off the Dark Masters makes Matt realize that his family probably isn’t getting back together, whether he accepts it or not. After being confronted by Cherrymon, a Digimon scheming to turn the DigiDestined against each other, Matt is encouraged to cut out his supposed enemies — namely Tai — and forge his own path. 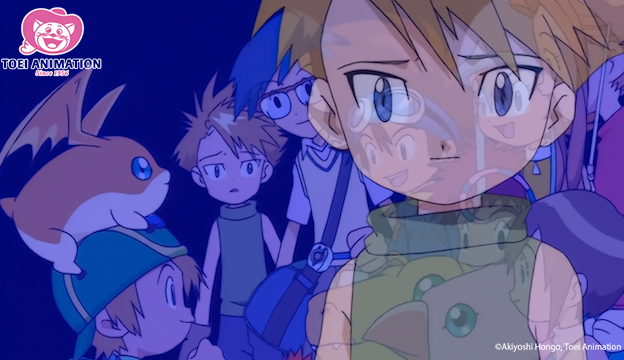 Despite the irony of having the Crest of Friendship, Matt chooses to temporarily break away from the others, admitting that T.K. can take care of himself and beginning the process of sorting through his angst. Sure, he cries a little when Tai punches him in the face, but what does that have to do with getting over your crippling self-doubt and anxiety? Self-reflection is uncool and overrated, right? Right? OK, maybe not.

If this version of Matt taught us anything, it’s that trying to play tough all the time doesn’t help. In fact, it might end up backfiring in the end.

As it turns out, Matt isn’t exactly a “lone wolf” after all.

Let’s dig a little. The Crest of Friendship doesn’t symbolize what Matt already has, but something he needs to actively work toward. Inevitably, Matt will have to return to the real world after his Digital World adventure. If Tai is brazenly courageous and Izzy is obviously hungry for knowledge, can we necessarily say Matt starts off as a social butterfly? Not exactly. 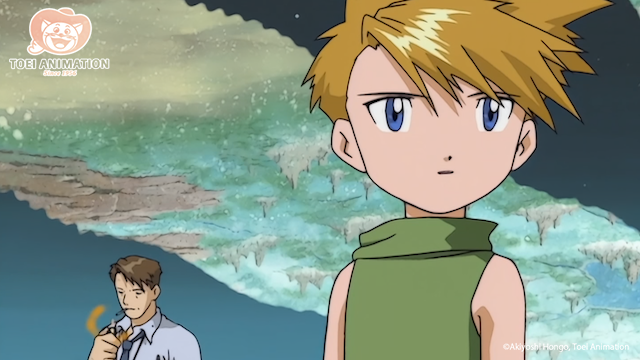 Matt watches T.K. reunite with his mom after returning from the Digital World
Image via Hulu

Matt accepts he can’t change his family. Having time alone forces him to realize he needs to look inside in order to not only survive the Digital World, but to cope outside of it as well. Because, despite how cool your giant blue wolf looks, it doesn’t fix a complicated, real-life family dynamic. This tension ultimately reaches a fever pitch when Matt, more depressed than ever after splitting from the group, loses himself inside a strange cave. Here, Matt confesses he’s pushed people away because, if his family didn’t want him, then why bother opening up to anyone ever again? Can anyone truly love a brooding, seemingly antisocial teenager with boyband hair? 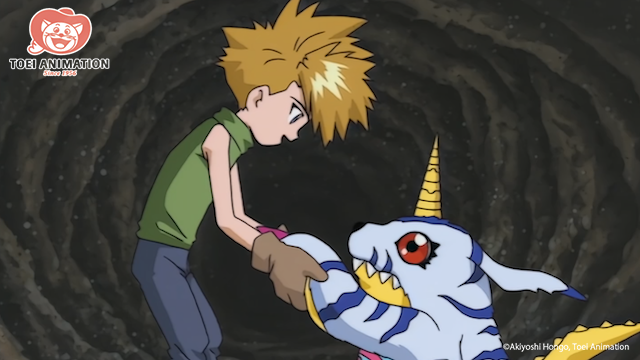 "Let's make a promise that we'll always be there for each other, no matter what happens. Gabumon and Matt, friends for life."
Image via Hulu

Yes, of course. And not only that. In this memorable scene, Gabumon admits it’s okay to cry. If Matt can’t cry in the real world of divorce and being separated from his brother, he can at least cry here, in this allegorical cave. After expelling all his personal demons, Matt learns an important lesson: It’s okay to open up to people and actually show emotion. In a 2006 conversation with fans on the Digimon fansite With the Will, voice actor and scriptwriter Jim Nimoy commented if given the chance to rewrite one Digimon Adventure character, he “would make Matt less of an indecisive guy.” In hindsight, this breaks open Matt’s entire character arc. His main trait isn’t the “lone wolf” but something far more complicated — someone troubled by his own self-doubt.

Breaking the Fortress of Solitude 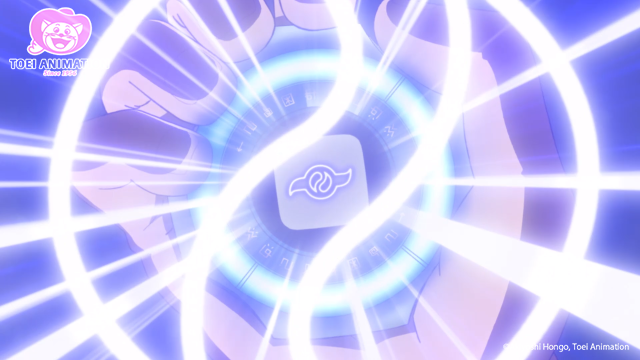 In the latest 2020 iteration of Digimon Adventure, Matt helps Tai and company siege an attack on Gorillamon in the eighth episode “The Children's Attack on the Fortress.” Having arrived before everyone else, Matt is seemingly less unfazed by the severe amount of violence aimed at them. Admittedly, it seems like this version of the Digital World is even more hostile, which makes Matt’s stoic demeanor all the more impressive. Despite the fact that Digimon now apparently have access to military-grade weapons, Matt doesn’t concede to Tai’s help until he finally sees the others can hold their ground. For what it's worth, this is what proves them in his eyes — that they can carry their own weight. They aren’t, as Nimoy had pointed out, indecisive.

The Crest of Friendship briefly appears on Matt’s Digivice, he kicks Gorillamon’s butt, and finally decides Tai and his pals aren’t so bad after all. This version of Matt has, so far, had his entire original arc turned inside-out. Rather than beginning in a group, Matt stakes it out alone, and in a pivotal moment, realizes the powerful potential of friendship. For better or worse, this new Digimon Adventure has already done the legwork of admitting Matt’s more than a two-dimensional “lone wolf.” Having essentially addressed an arc that previously took at least 50 episodes to reach by Episode 8, it seems as though Matt may serve a very different role than before. 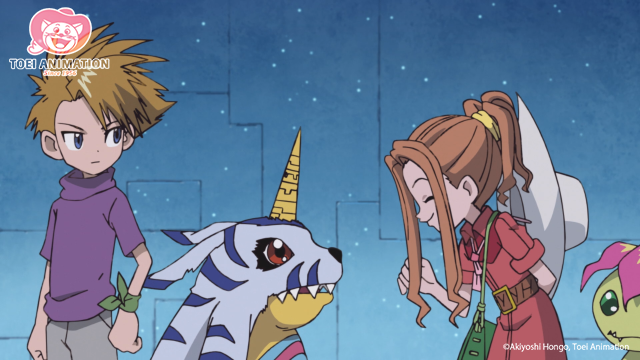 While this doesn’t exactly answer the specifics of why he’s already in the Digital World, it does tell us this: If even Matt can have a change of heart so soon, there’s no telling what else is in store for the others. The kids will certainly have an unprecedented set of challenges awaiting them. With everyone rounded up together now (sans a certain pair of younger siblings), this is just the beginning of a new twist on the status quo. Maybe Matt's truly a social butterfly in wolf’s clothing after all? It's a brave, all new Digital World out there.

How do you feel about Matt in Digimon Adventure? Let us know in the comments below!

Blake P. is a weekly columnist for Crunchyroll Features. His favorite Digimon is Patamon. His twitter is @_dispossessed. His bylines include Fanbyte, VRV, Unwinnable, and more.