Wait, where's Kagome and Inuyasha, and who's the mother of Sesshomaru's twins!? 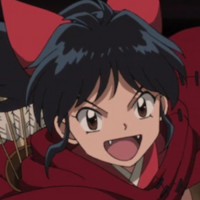 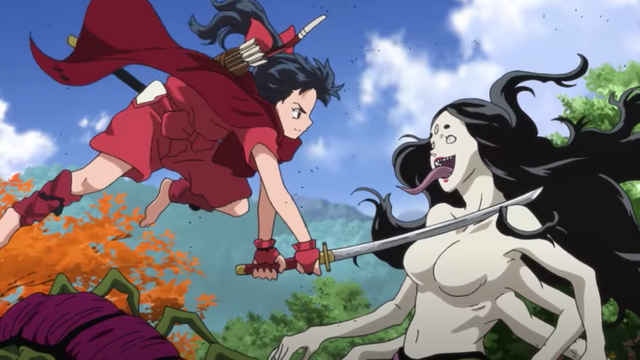 "As I live in this world, I know that things will continue to change, but I'm not worried about the future. I'm going to spend every day with Inuyasha. No matter what, now I know the two of us will be together, as we head toward tomorrow." Those were the last words spoken by Kagome Higurashi as she and Inuyasha looked out into the world, finally living peacefully after completing their long, tireless journey.

Rumiko Takahashi's epic adventure came to an end after many wonderful episodes, and to me, this series had one of the most satisfying endings of an anime I'd seen. As a fan — and after spending years invested in this series, even waking up at 3 AM just to watch it — I was completely content with the conclusion. I didn't feel there needed to be more, but of course, if there was some sort of sequel, continuation, or spin-off, I sure as heck wouldn't be disappointed. And years later, that very thought is becoming a reality. There's already so much hype around the highly anticipated Inuyasha sequel spin-off Yashahime: Princess Half-Demon, even sparking a large social media discourse. As a HUGE Inuyasha fan myself, I'm often wondering what I can expect and what I'd want to see in this series and if Yashahime: Princess Half-Demon will live up to Inuyasha's anime legacy? 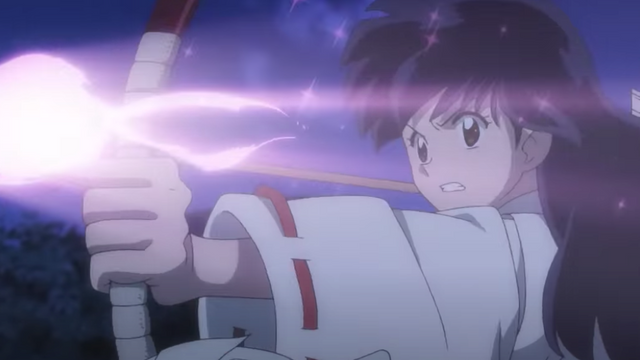 From Viz Media, the synopsis for Yashahime: Princess Half-Demon is as follows:

The official website for Hanyou no Yashahime: Sengoku Otogi Zoushi recently shared a 90-second promotional video for the series.

Seeing Moroha, Towa, and Setsuna is already making me emotional. Moroha is the spitting image of her parents, with a fiery personality just like her father, and seeing her with both her parents' abilities is just peak level excitement. Setsuna is straight-up Sesshomaru's daughter, and I'm already loving Towa's confidence, as well as the twin's opposite personalities and how their strengths and weaknesses will compliment each other. I'm also stoked to see everyone's demon strength and abilities during combat because Moroha, Towa, and Setsuna aren't your average demons!

I'm excited to meet these next-generation characters, but I'd be lying if I said I'd be okay not having the original characters be a part of this story. Seeing as it wasn't until the very end of the last episode of Inuyasha: The Final Act we got to see the original characters have any chance at a normal life, I'd really love to see what a typical day in the life is post-Naraku.  As we've seen in the trailer, Inuyasha, Kagome, Sango, and Miroku continue to slay demons after the events of the last episode, which is to be expected, but I'm genuinely curious as to how they balance battling demons with being parents, especially if any of their jobs take them far away from the village for long periods of time.

When it comes to relationships, I already know how the original characters made out, but one of the biggest questions on my mind is ... WHO IS THE TWINS' MOTHER? Considering Sesshomaru was never the most welcoming character, it makes me really curious about who was able to break down that barrier of his. I don't need an excessive amount of time dedicated to how Sesshomaru became a father — a single episode or even a nice little flashback scene will suffice — but the show can't just say, " Oh so Sesshomaru has twins now," and not let me know who, what, when, where and how this happened! I also need to know if the mother is human or not because again, that would be really telling of Sesshomaru's character.

And what about other characters like Shippo? I'm ready to see that full-fledged fox demon glow up! I feel so much excitement thinking about bringing back a classic series with new additions, and there's some cryptic information currently available at the time of this article I wasn't expecting that's making me even more anxious for this series like ... why is Moroha all alone!?

Where are Inuyasha and Kagome?

One of the things I was looking forward to most was seeing Inuyasha, Kagome, and their daughter interact as a family, but something about Moroha's character biography struck me. According to her description, she lived alone since she was young, and because of that, she knows little about her parents. WAIT, WHAT?! We KNOW Moroha is Inuyasha and Kagome's daughter, but it doesn't make sense to me she wouldn't know anything about them? I've heard theories Inuyasha and Kagome died, but I really don't like this idea. To me, it doesn't feel right having the two main characters, the ones I watched face incredible danger, going up against the strongest of enemies episode after episode, die suddenly from who knows what. It would be a huge disservice to Inuyasha and Kagome to write them off like that, and also ... it would just be a huge bummer, so I hope the series doesn't go that route. I don't know exactly where they are, but based on the love and support Inuyasha had from his mother and Kagome from her family, I know they wouldn't willingly neglect Moroha, and because of that, my hope of seeing this family interact at some point AND to experience some good anime parents remains strong because we really need more of those. 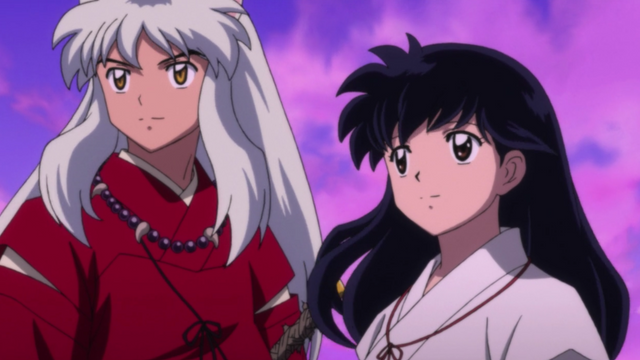 There's this mysterious element surrounding the original characters I wasn't expecting when Yashahime: Princess Half-Demon was announced, but now, after watching and analyzing the trailer a million times (as one does) I'm coming up with theories of how I think the series will intertwine the characters, bridging the gap between old and new generations and, truthfully, I'd be satisfied if any of this were true because I really like this idea. Here's my thought: the trailer explains there was the demon Root Head, who was defeated by Inuyasha and his friends. But soon after, the demon gained the power of the tree of ages creating a passage from the Feudal Era to the present day — which is how Towa was separated from Setsuna. We also know Moroha, Towa, and Setsuna begin an adventure to uncover their missing past.

The trailer made it a point to bring up Root Head and the tree of ages so I'm speculating the tree of ages opened up passages to not just the present day, but to other worlds as well, seeing as the tree of ages lives throughout different generations as explained by Kikyo in Inuyasha the Movie: Affections Touching Across Time, and maybe Inuyasha and Kagome were separated during that same period of time as Towa, and everyone's memories related to those lost in time were altered. It's quite possible the OG gang are now outsiders scattered between eras, and the only way to fix time is to put fate in the hands of the next generation. This would explain why the original characters are gone, from what I can tell, and why Moroha grew up alone because, again, I don't buy the theory Inuyasha and Kagome died. Seeing as when Towa was separated, she grew up in the present day with the Higurashi's, I'm sure they would've told her stories about Inuyasha, Kagome, and the Feudal Era — giving her insight into how the passages connecting eras works, becoming the key to their missing pasts.

The story as it is now is tough to decipher, and while I'm having fun coming up with these theories, my overall hope for this series is to get a healthy mixture of characters and storylines. Getting the opportunity to follow up on the original character's lives while also experiencing the adventures of their children without anyone's character development being sacrificed or neglected for the story's sake. 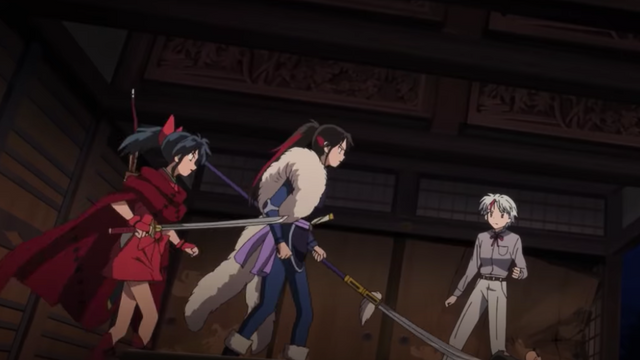 When it comes to the writing aspect of Yashahime: Princess Half-Demon, I find myself seeing something very positive. Yashahime: Princess Half-Demon appears to be an original anime TV series spinoff of Inuyasha. Because of that, it lends itself to more fluid storytelling with the unique opportunity to tell a full and complete story from the beginning, without prolonged pauses or filler episodes. I feel this is a rare treat when it comes to anime.

Unfortunately, Rumiko Takahashi is only credited as the main character designer and doesn't appear to be involved in the story. When I hear news like that, it's easy to think this could be one of those typical anime patterns where there's potential for an anime series to go off the rails if the original author isn't involved. However, I'm not really worried seeing as Katsuyuki Sumisawa has returned for this project, and will be in charge of the series scripts just like on Inuyasha. Teruo Sato, Yoshihito Hishinuma, and Kaoru Wada are also returning to the series with SUNRISE continuing on as the production house. With a team and studio already familiar with the property, and who has previously handled with such care the show that has already brought me so much joy, I feel secure when it comes to the storytelling.

KKAAGGOOMMEE!!! Who else just heard Inuyasha's voice ringing in your ears as you read that? I can't be the only one and man I do hope we get to hear that at least once more. I'm beyond excited for this new feudal fairytale and have confidence it will be a good balance between old and new. The only thing that can make it better is if Do As Infinity comes back to sing another theme song because let's be real, the second Inuyasha ending slaps!

What do you hope to see from Yashahime: Princess Half-Demon as an Inuyasha fan? Let us know in the comments!