Though, you might not want to catch this train! 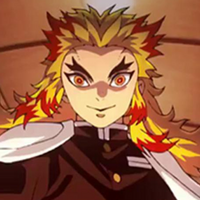 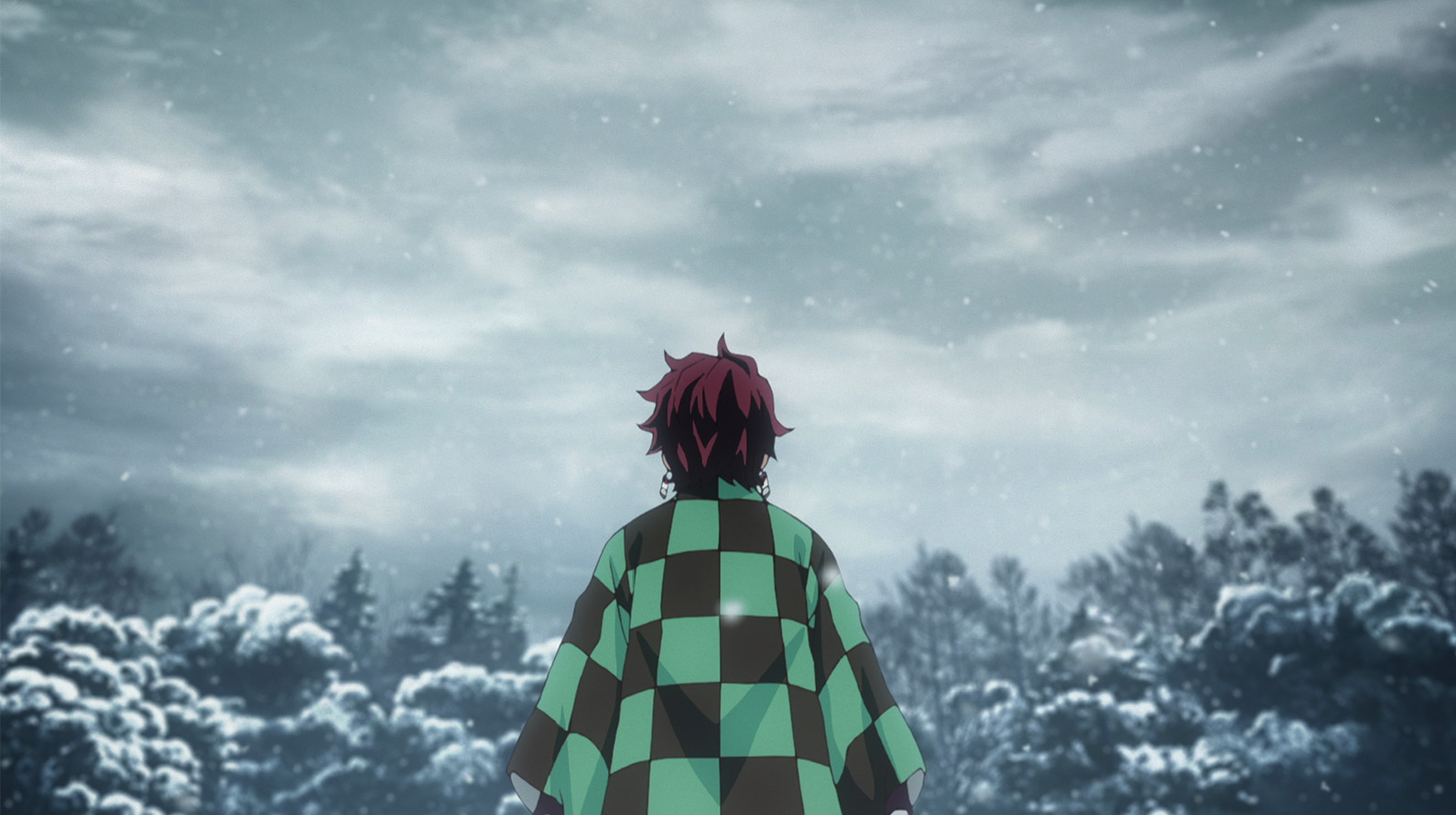 The much anticipated Demon Slayer: Kimetsu no Yaiba THE MOVIE Mugen Train anime film opened in Japan last Friday, taking everyone watching for an emotional ride through the next story of the anime adaptation of Koyoharu Gotouge’s record-breaking manga series that ran in Weekly Shonen Jump.

Going into Demon Slayer: Mugen Train, I didn’t expect to be wowed as much as I was. Throughout the entire film, I was shaking my head in disbelief that the team at Ufotable, led by director Haruo Sotozaki, who returns from the TV anime, was able to surpass the animation from one of the best-animated anime series.

I could clearly tell that Ufotable had stepped everything up a notch. The anime studio is known for its dynamic 3D backgrounds, though before now they have largely been used with minimal 2D assets — scenes were littered with 3D assets that, while looking good, were usually masked by filters and effects to give the illusion of 2D work.

The opening scene has the leader of the Demon Slayer Corps., Kagaya Ubuyashiki, walking through a graveyard with a background that rivals that of Studio Ghibli’s Spirited Away. I was astounded by the level of detail on display. Ufotable’s digital team worked hard throughout the film to combine the 2D traditionally drawn assets and the camera of 3D compositing to create scenes that rival those seen in Violet Evergarden the Movie. But that was only one type of technique used for the background art.

During certain key scenes, the landscapes, such as snow or the sun rising, were almost realistic, giving off the same look like the ending of Sarazanmai, which has some key animation layered over the top of live-action photos/videos. This not only helped the scenes look spectacular but helped drive the emotional intensity of what was happening on screen — but again, no spoilers! 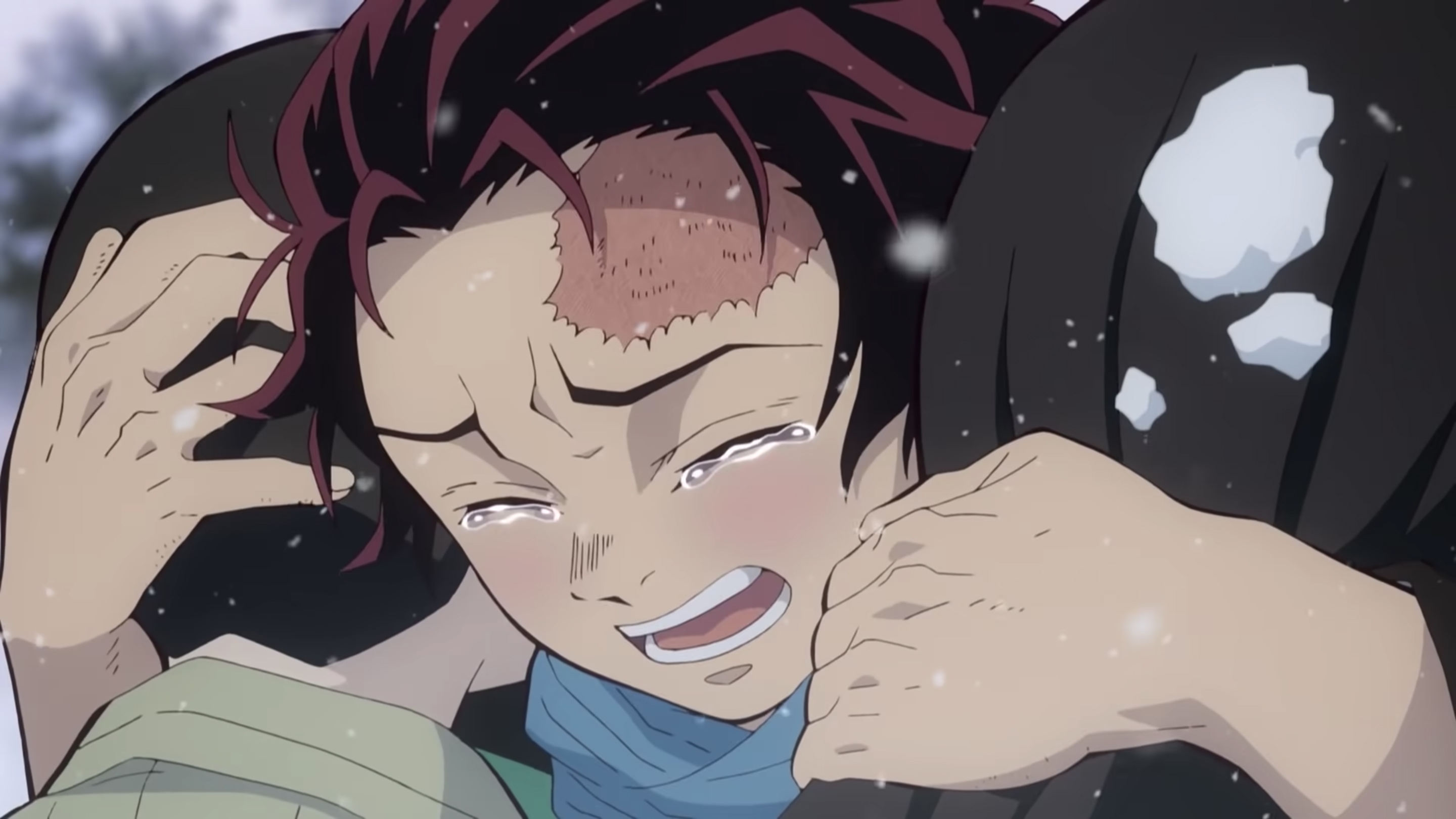 While the story of Demon Slayer: Kimetsu no Yaiba, either in manga or anime form, doesn’t really shake the foundations of action battle series storytelling, what sets Demon Slayer apart from the rest is the presentation, how the story is set out, and the lovable characters. Demon Slayer: Mugen Train is no different in that regard. Throughout the film, the story beats are pumped up by the music, the animation, and the emotional tugs at our hearts watching characters we love go through painful situations.

Demon Slayer: Mugen Train is Rengoku’s story, hands down. Though the anime film does a wonderful job of letting us follow Tanjiro, Inosuke, Nezuko, and Zenitsu, this story was fully centered around the Flame Hashira Rengoku. While we first met Rengoku at the Ubuyashiki mansion in the TV anime, we really get to know him through the story of Mugen Train and see the struggles he went through to get to where he is. 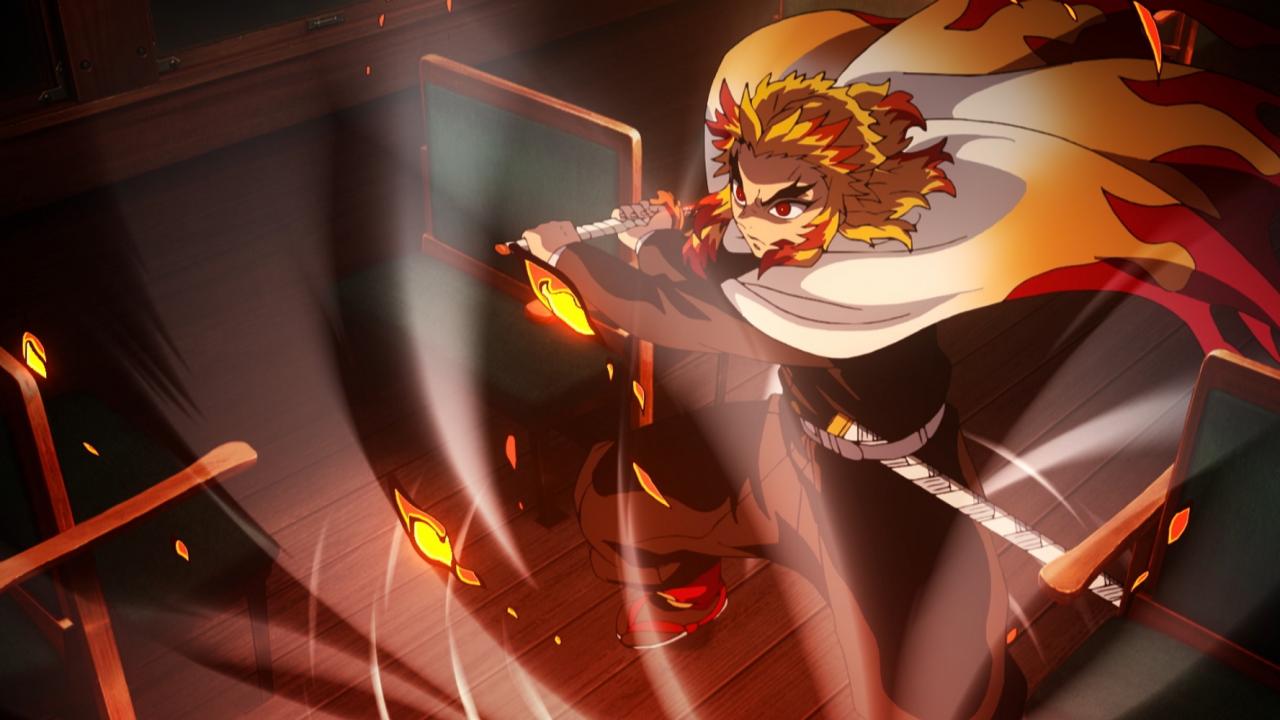 The film does spend some time on the other characters and fleshing them out more, especially through a certain dream sequence, but the main focus was on Rengoku — as it should have been.

In saying that, Demon Slayer: Mugen Train adapts the manga story very closely, which is lucky for it as the story is mostly self-contained, letting it be a good starting point for newcomers to the franchise — though again, I should stress, the emotional impact of the film would be lessened if you have not seen the TV anime series. 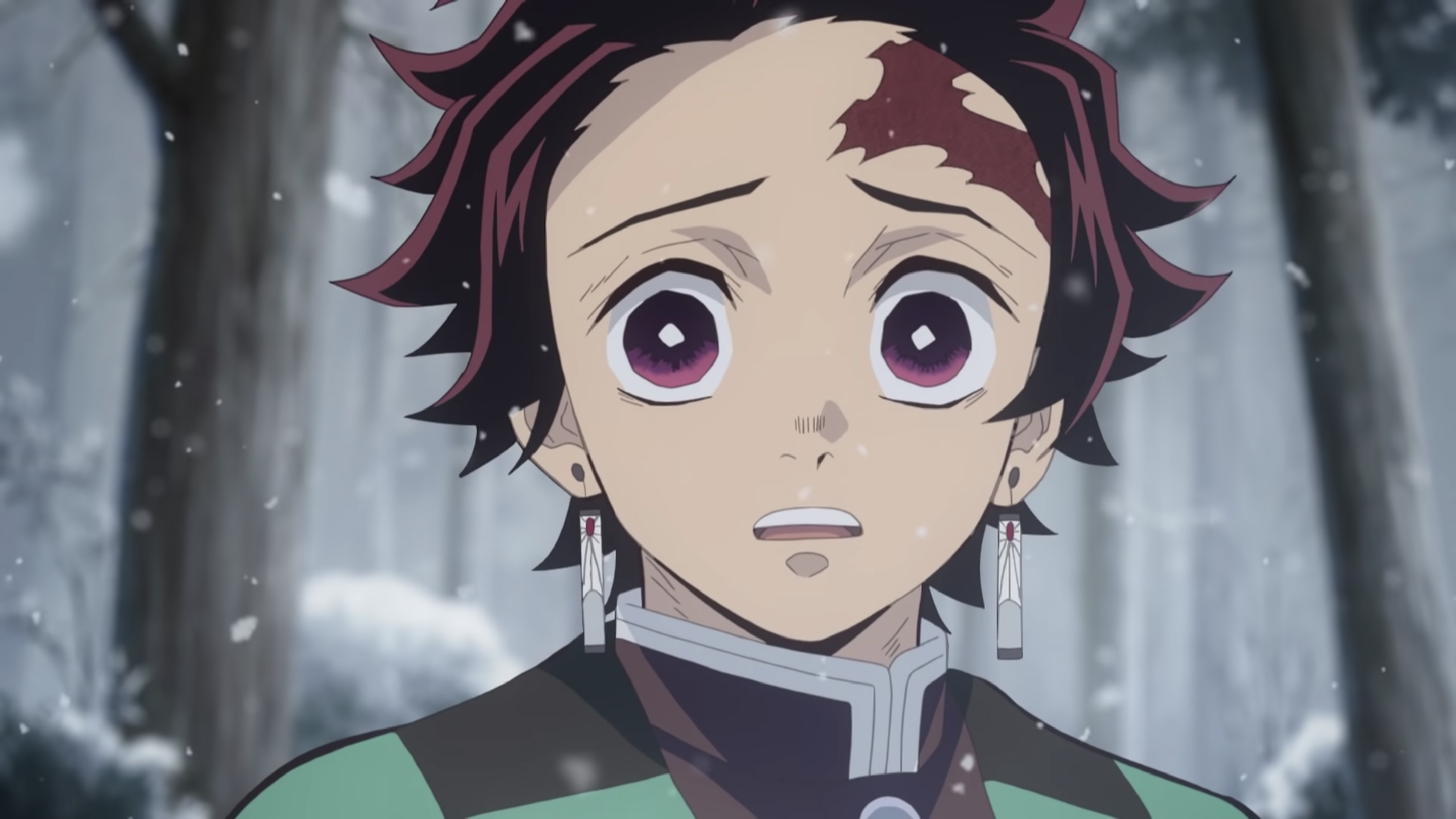 For those who watch Demon Slayer: Kimetsu no Yaiba for the action, you will not be disappointed. Fight scene after fight scene rivals, and sometimes surpasses, that of Episode 19 of the TV anime series. Funnily enough, the film flashes back to the TV anime version of the Rui vs. Tanjiro/Nezuko fight, giving viewers a great comparison of how much the movie has evolved past that of the TV anime series.

While I’m usually a fan of a clean digital animation style, Demon Slayer: Mugen Train differentiates itself from the TV anime by applying a film grain-like filter over the top of the entire film, which only helps in the comparison with the older Ghibli-style films and adding to the older aesthetic of the setting of the franchise.

This is all while keeping the trademark humor of Demon Slayer intact, both visually and through the voice acting. The film is littered with humorous cutaways that can be found in the manga series. One example features Rengoku being praised by everyone else in a cut that looks like it was lifted straight out of the manga and colored. These scenes give the audience some chuckles before the brewing demonic storm.

As seen in the trailers, the team fights a demon named Enmu, who hijacks a train to do their own bidding. The fight between the slayers and the demon was a visual spectacle. Hands down some of the best action scenes in anime ever. Over and over again, the music, sound effects, animation, and CG background made for such a satisfying fight.

Though in true Ufotable fashion, the CG 2nd form of the demon looked goofy when compared to the traditionally animated elements in the scene. The titular train also looked a little out of place when contrasted with the rest of the perfectly polished establishing shots, but as it was dark most of the time it was on screen, it wasn’t as jarring as Enmu was in the lit-up carriages.

The second fight — which had higher emotional stakes, and left not a dry eye in the theater — was nothing but spectacular, though I felt it was a little short. One aspect of the second fight I loved was the storyboarding. The crazy monster of the first fight was gone and what was left was what looked like two, albeit very powerful, humans struggling to kill one another. The demon was nothing more than a man trying to take down a Hashira. Of course, the breathing techniques from Rengoku threw that realistic fight aspect out of the train window, but nevertheless, I loved the human aspect of it all. 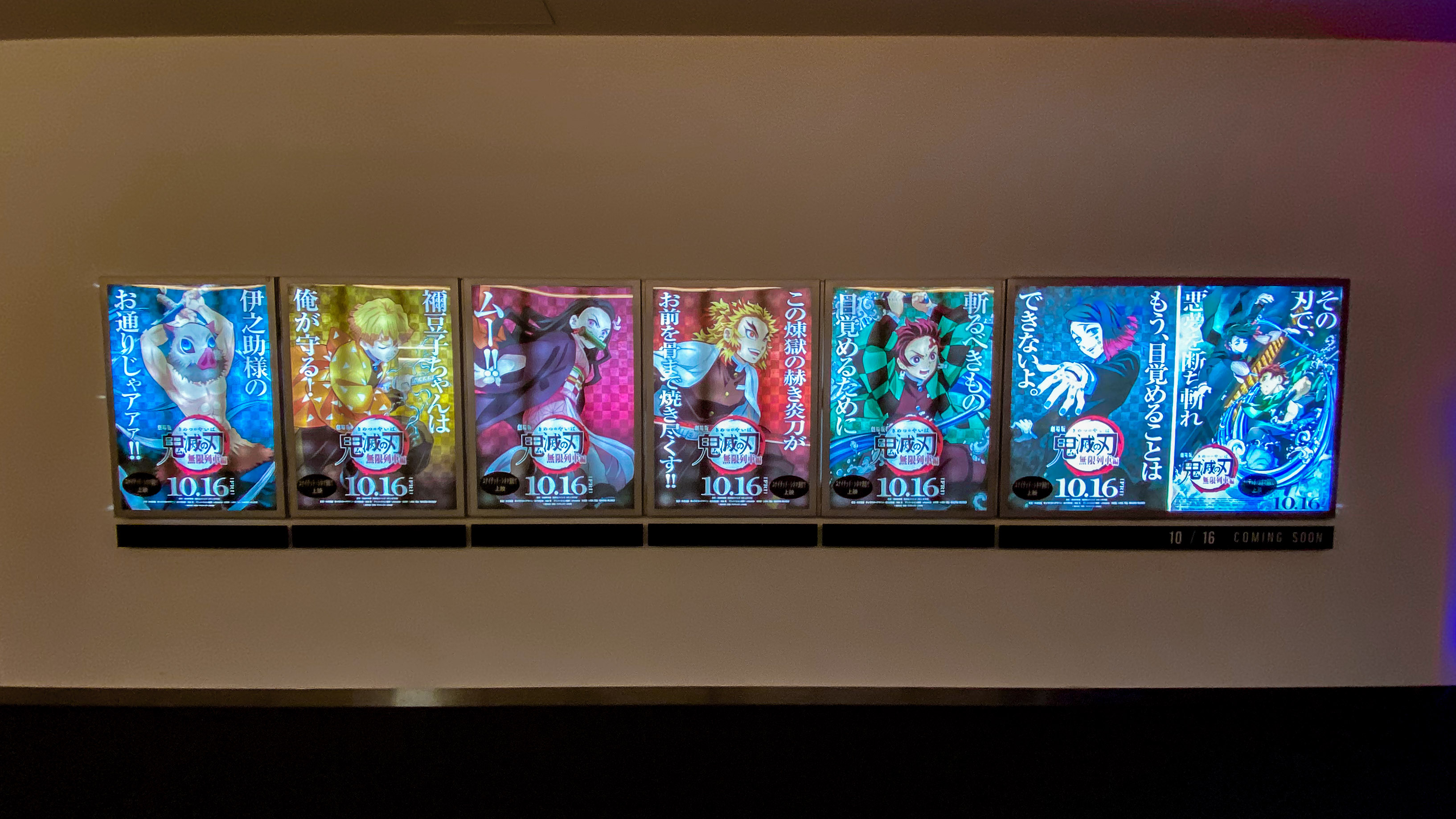 Without the soundtrack, from Go Shiina and Yuki Kajiura, who return from the TV anime, Demon Slayer: Mugen Train wouldn’t have had as much of an impact as it did. While they remixed a lot of the soundtrack from the TV anime series — which was great to hear coming out of IMAX speakers — the new music created for the film had an almost haunting feel to it. The music was accentuated with what sounded like gospel singers, belting out hymns as the sun rose on the final battle.

The end credits song "homura" by LiSA was equally as fitting for what had just occurred in front of me, letting me be able to work through what I had just seen as the credits rolled by. 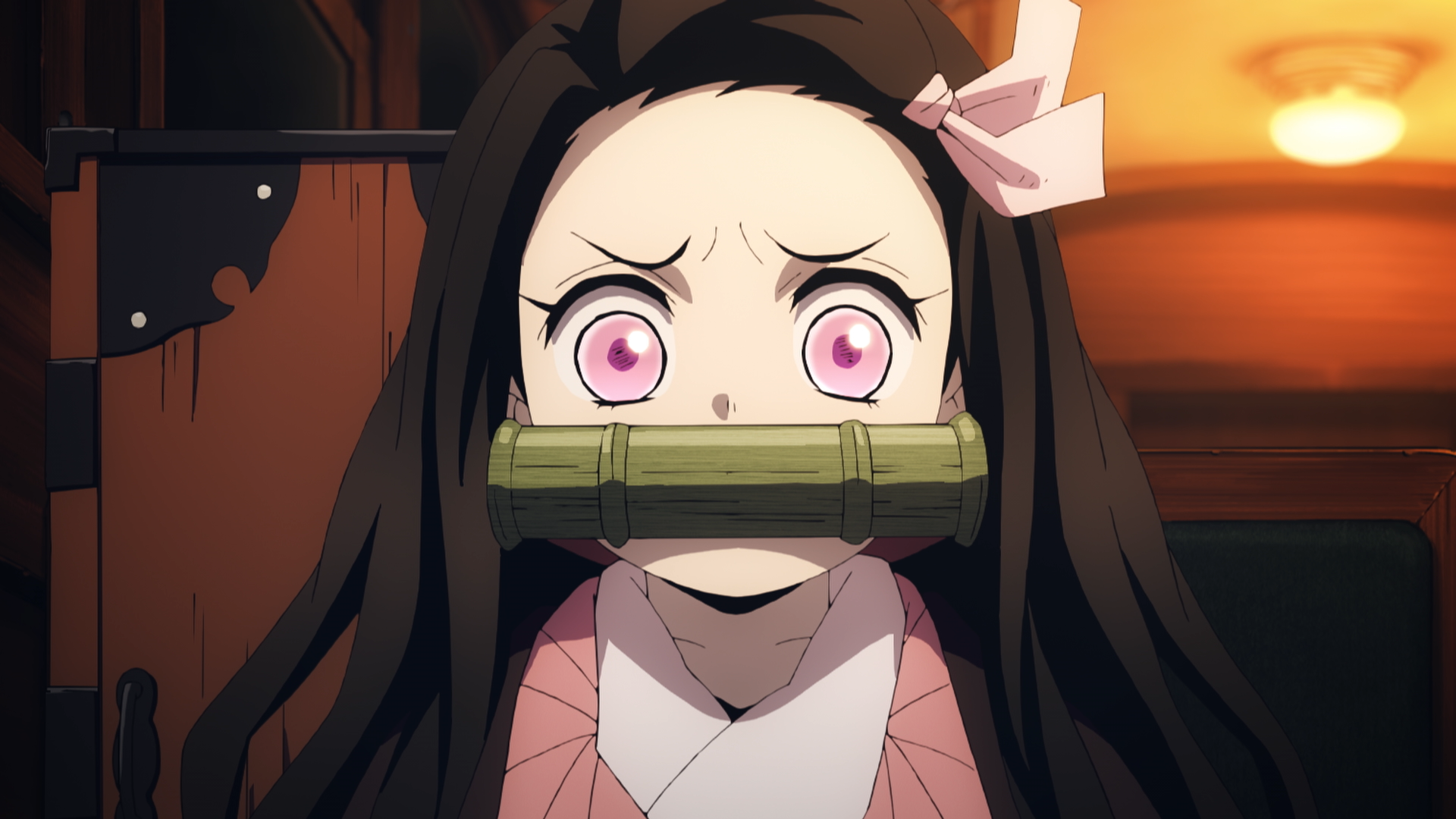 For fans of Demon Slayer; you were already going to see this film, you don’t need me to tell you to go see it. What I will say is that for manga readers — you’ll get a kick out of some scenes in the film, especially the ones teasing what is to come in future arcs. For animation fans, yeah Demon Slayer: Mugen Train is a bit of a popcorn flick, but it’s one that has heart and some of the best animation in anime today, from some of the best creators and teams in the industry.

Demon Slayer: Kimetsu no Yaiba THE MOVIE Mugen Train is a wonderful train ride that should be taken when it is safe to do so. 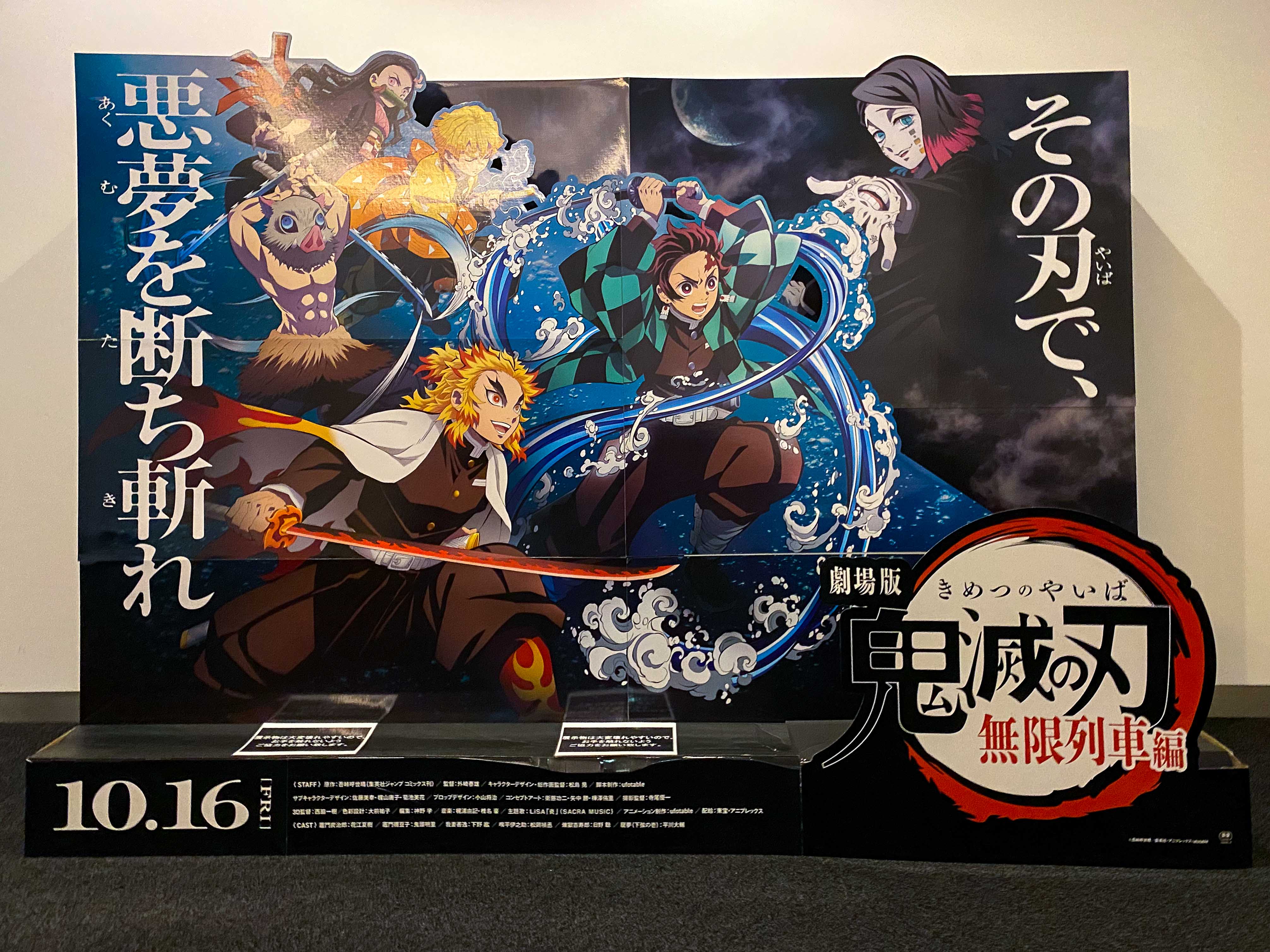