OPINION: Is TONIKAWA a Supernatural Romance?

This fluffy rom-com may not stay fluffy forever 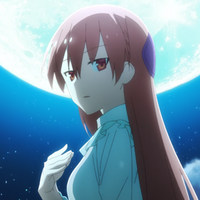 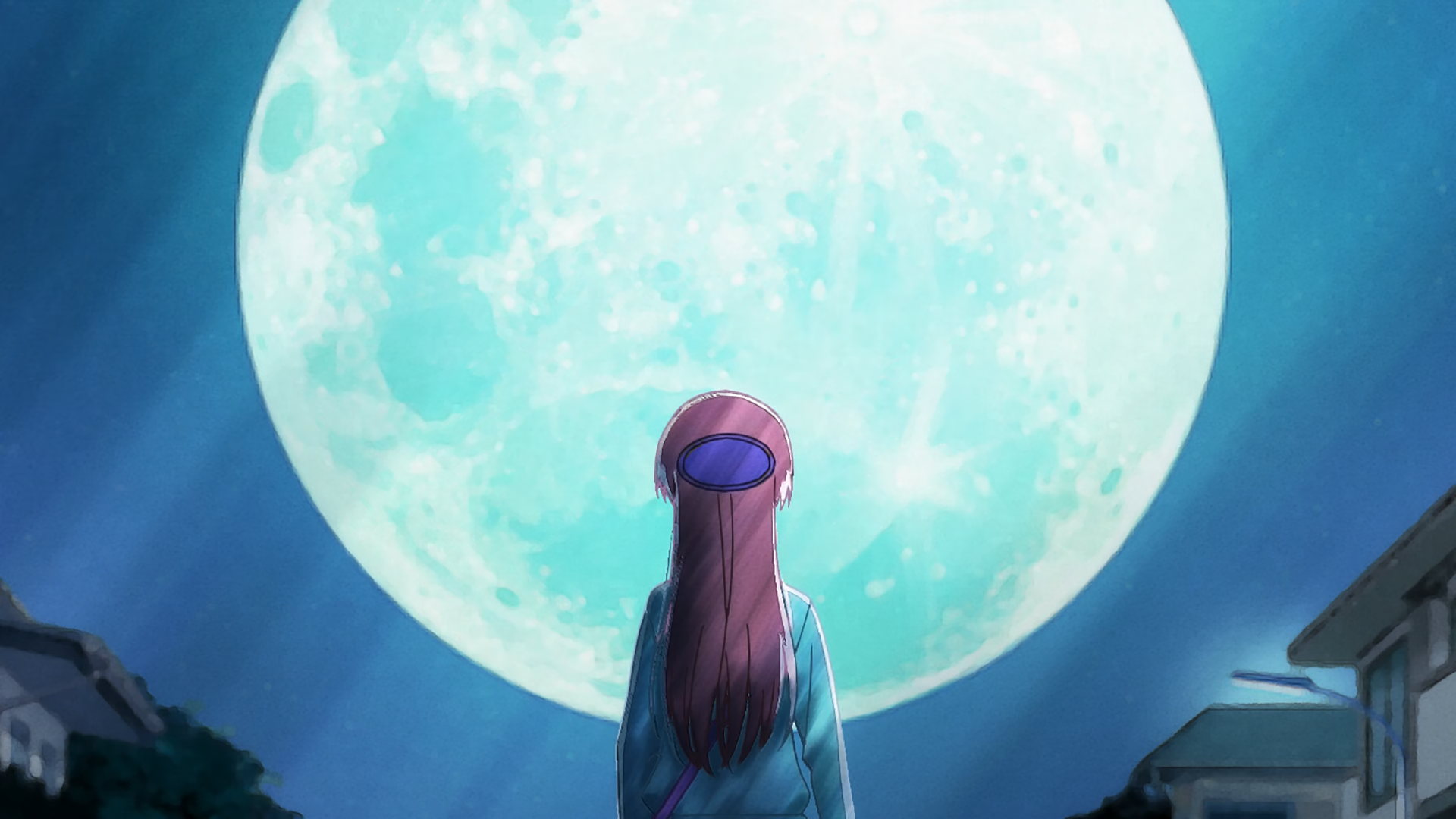 WARNING: Spoilers for TONIKAWA: Over the Moon For You and Hayate the Combat Butler ahead

Fridays have never been better. Every Friday, I tune into the latest episode of TONIKAWA and let the wholesomeness wash over me. Such a wonderful feeling. I never thought I’d be so enthralled by watching a newlywed couple blush over the thought of committing such a scandalous act as ... holding hands. TONIKAWA is a delightful rom-com that subverts our expectations in the best way. When I see Nasa and Tsukasa on my screen, I shut off my thoughts and relax in the cuteness.

But one of Tsukasa's lines in Episode 6 got me thinking. It’s an offhand remark that can easily fly under the radar, but it struck me as odd and got me wondering where this series will go. On the way to meet his parents in Nara, Nasa suggests taking the Shinkansen (bullet train), which Tsukasa declines, preferring to travel by bus because it’s cheaper. Then, she casually remarks how 150 years ago it would have taken two weeks to go from Tokyo to Nara by foot and how being able to make the trip overnight is like a dream come true. A humorous remark, meant to show gratitude toward modern transportation. In short, a joke. Or is it? 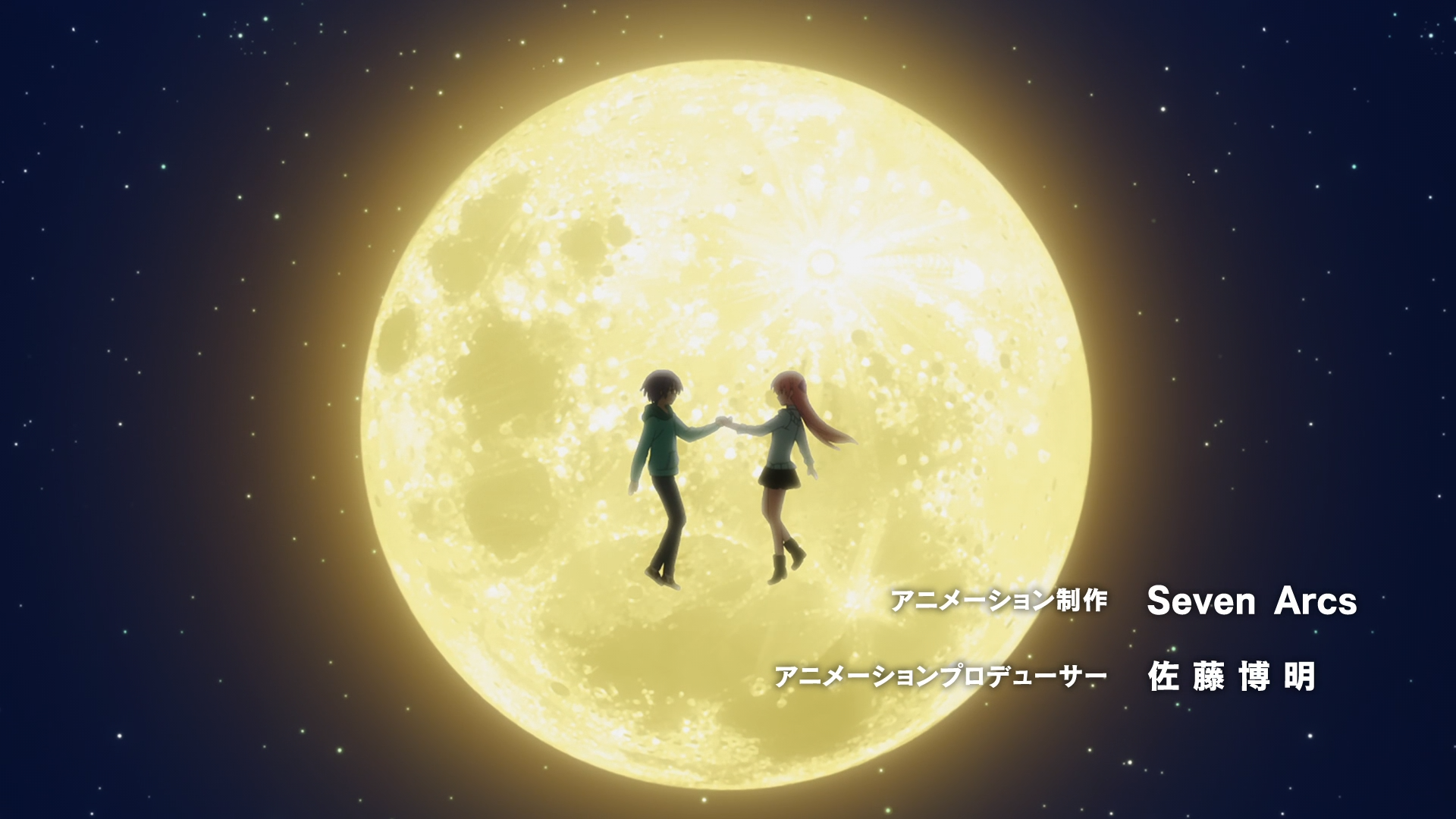 This is as expected of a work by Kenjiro Hata — author of the highly meta-referential Hayate the Combat Butler — TONIKAWA is a series that proudly wears its inspirations and cultural references on its sleeve. This episode, for instance, featured a “Hayate Express” bus parked next to a “Saginomiya Transport” bus. But one of the most prominent references in the series is not to any contemporary manga, but to a much older Japanese work. I am referring, of course, to Japan’s oldest story: The Tale of the Bamboo Cutter.

For those who are not aware, The Tale of the Bamboo Cutter is a Japanese monogatari (traditional prose story) from the 10th century. It details how the life of a simple bamboo cutter and his wife is changed when they discover a human child growing inside a bamboo stalk. Having no children of their own, they adopt this strange child, naming her Kaguya-hime (Princess Kaguya). As she grows, her beauty attracts suitors seeking her hand in marriage, who she turns away by challenging them with impossible tasks. She is even sought after by the Emperor of Japan, who she also turns down. Eventually, it is revealed that she is a celestial being from the moon and is forced to return to her original home, leaving everyone she knew on Earth heartbroken. 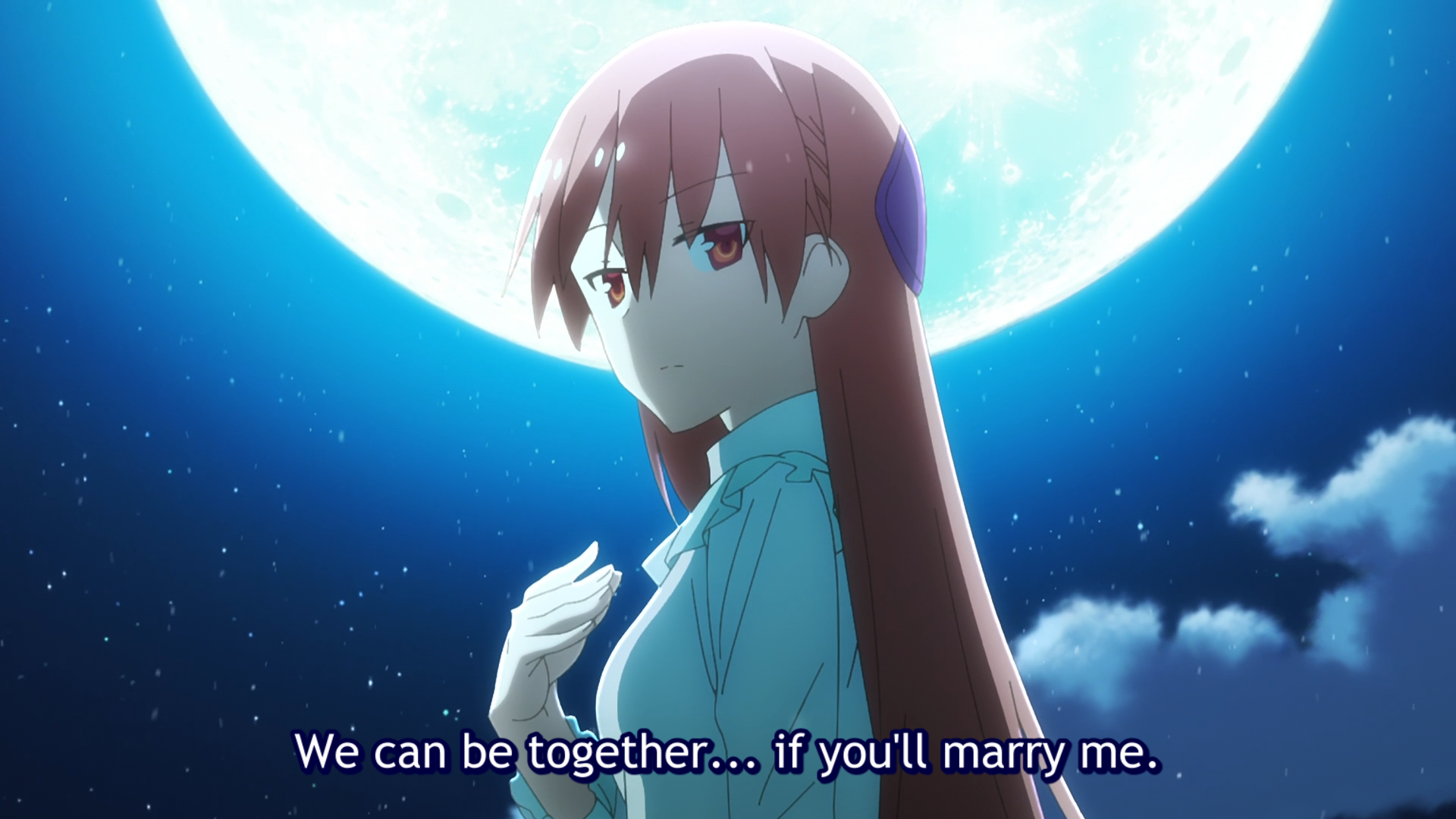 Over the years, this story has inspired countless others, including many anime, from loosely inspired works like Turn A Gundam to outright adaptations such as the late Isao Takahata’s Ghibli masterpiece The Tale of the Princess Kaguya.

So where does TONIKAWA fit in all this? After Nasa gets hit by a truck in the first episode, he sees Tsukasa leaning over him against the backdrop of the full moon (expect to see a lot of lunar visual elements in this show). As Tsukasa walks away, Nasa thinks about how it looks as though she is returning to the moon ... like Kaguya-hime. He chases her down and asks her out. She agrees on the condition that he marry her. After agreeing to this, Nasa passes out. Three years go by without any communication, mirroring the three years Kaguya-hime spent away from the Emperor, keeping in touch with him through letters. 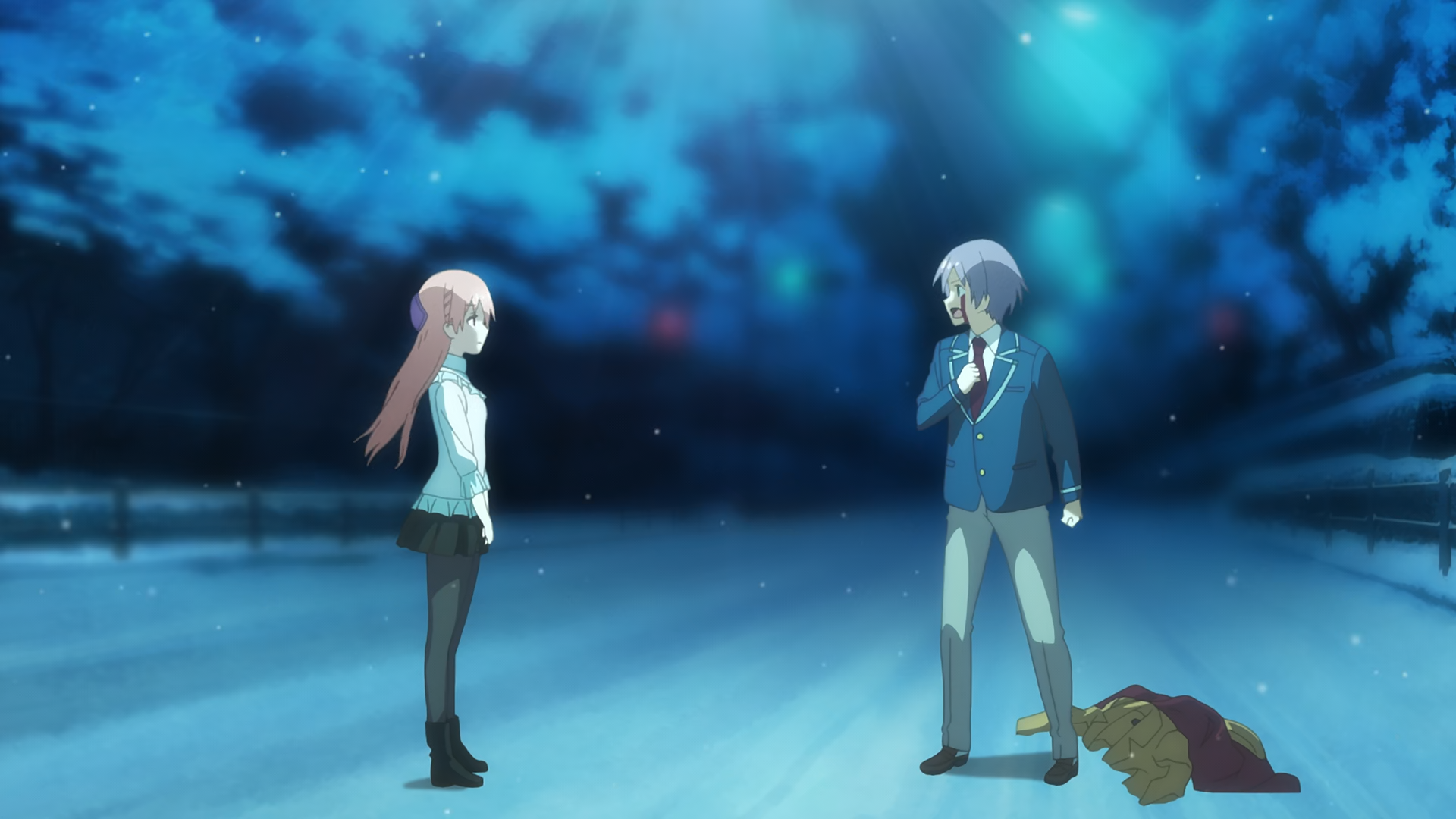 The obvious and straightforward interpretation of TONIKAWA is as a modern retelling of The Tale of the Bamboo Cutter. The opening song, which goes from a traditional Japanese sound to a fast-paced modern electronic beat, is probably the strongest indicator of this. In many versions of the story (including Takahata’s), Kaguya-hime was sent to Earth as a punishment for some transgression. While on Earth, she would form material connections — with people, with places, with things — only to have all these connections ripped away when she is summoned back to the moon. It’s a harsh punishment, fitting for such a deeply tragic story, and evokes the Buddhist belief that the root of suffering is attachment. In that light, TONIKAWA can be viewed as a subversion of the original story that celebrates attachment, a version where Kaguya-hime never leaves. It is quite telling that Tsukasa’s “challenge” to Nasa is to marry her, whereas the challenges of the original were to avoid marriage. 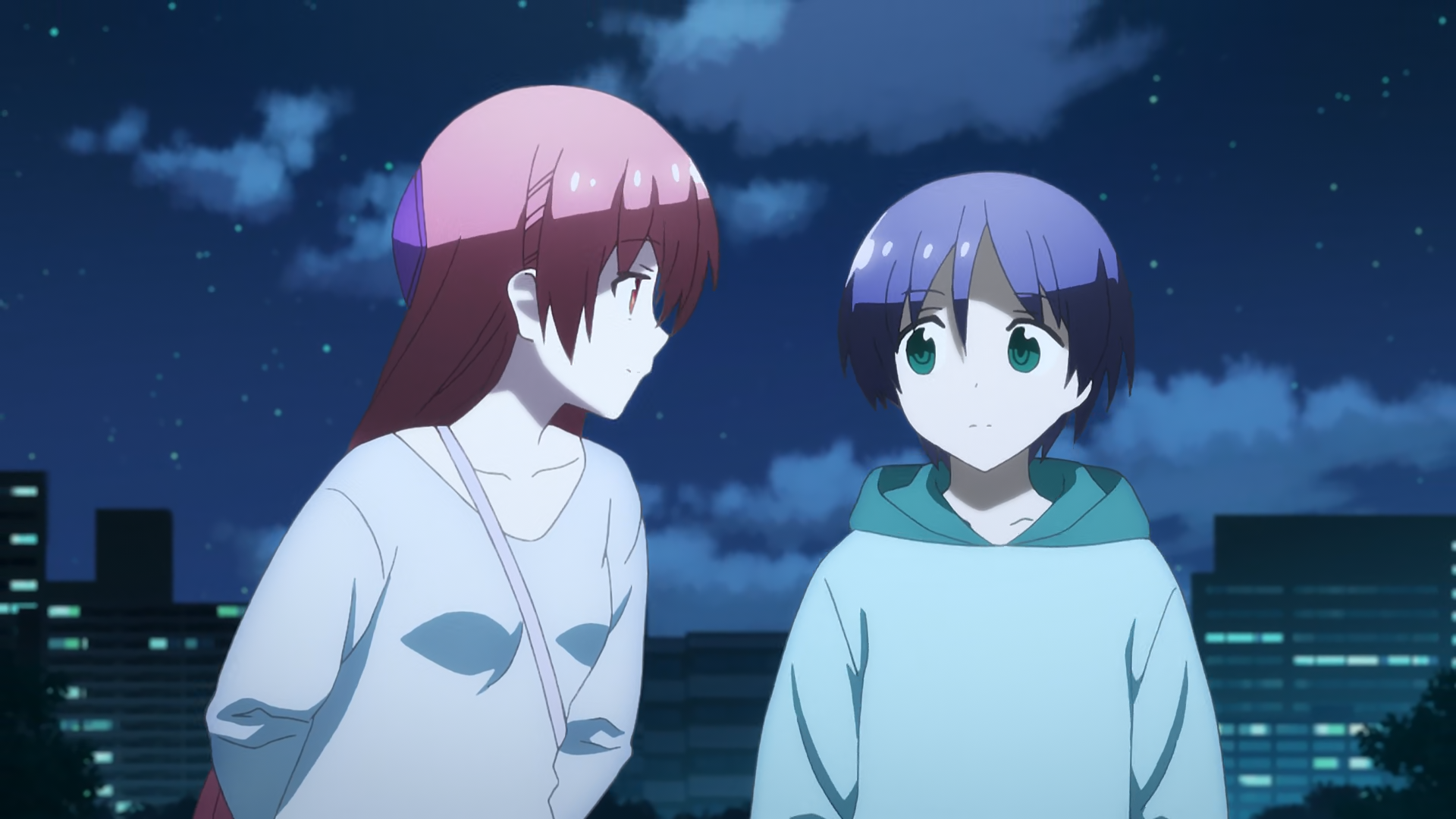 I’d have left it at that but for one factor: Kenjiro Hata. So far, TONIKAWA and Hayate the Combat Butler have had similarities — an “unfortunate” protagonist, a wacky and outlandish start, a ton of pop culture references, comedy based on misunderstandings, and so on. Of course, Hayate’s harem shenanigans don’t take place in TONIKAWA, and there are other key differences between the two, but there is enough to say they were written by the same author. That’s where my concerns stem from.

Despite being wacky and over-the-top, Hayate seemed reasonably within the bounds of reality, but it was not. Hata gradually introduced supernatural elements into the story, such as Isumi’s exorcist powers. Around Chapter 178, starting with the introduction of Athena followed by the Golden Week arc, the supernatural became commonplace. Magic, time-traveling, spirits and possession, mythological creatures — poor Hayate had to face all of these. It was only a few volumes before reverting to its original comedic roots, but for that brief period of time, the manga completely changed tone. Will that be the case with TONIKAWA as well?

There are several indicators that something supernatural is afoot. We see that it was in fact Tsukasa who got hit by the truck and not Nasa, yet she barely has a scratch on her. “It takes more than this to kill someone,” she claims. We see that her prized possession is a moon rock — not a part of your everyday rock collection, is it? She frequently makes references to historical time periods (as mentioned earlier). Her sister, Chitose, incredulously asks Nasa whether he knows who Tsukasa really is. I have to ask the same question. Who is she, really? 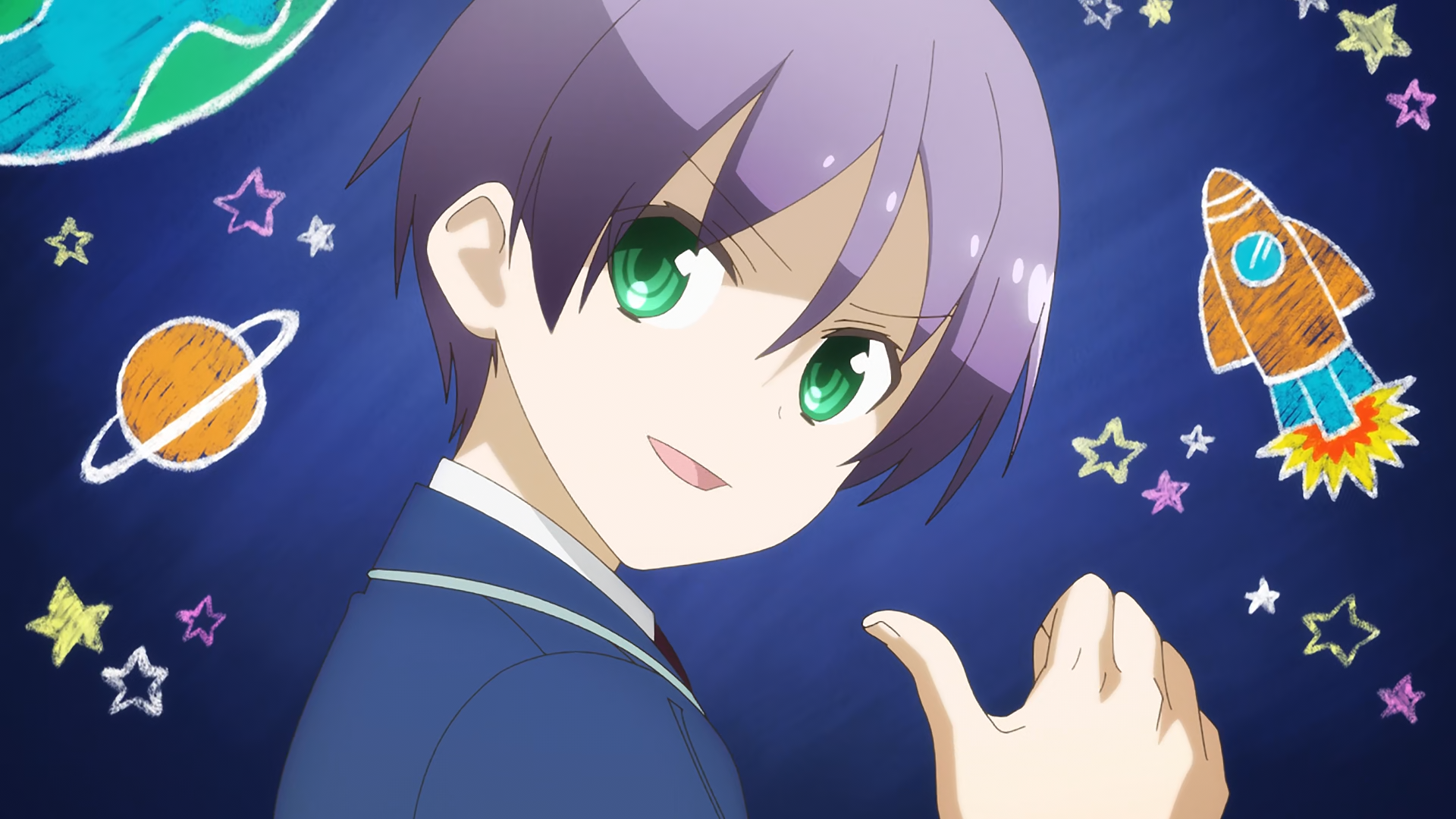 There is an argument to be made that Tsukasa is Kaguya-hime herself — the above indicators point to her extraterrestrial origins. Why she returned to Earth is anyone’s guess. Perhaps her punishment has been lifted. Maybe she is being punished again. In any case, this raises the question: How will this end? Will Tsukasa have to return to the moon? This may sound like a crazy idea, but a hint may lie in the name of the manga: Fly Me To The Moon. This might be more than just an Evangelion reference. Nasa keeps proclaiming how he’ll reach the speed of light faster than his namesake. What if that truly came to pass? What if Tsukasa does return to the moon, and Nasa actually goes to the moon to get her back? After all, the anime is subtitled Over the Moon For You.

Of course, this is all speculation. It is entirely possible that Hata is just teasing us with all these references, in which case I will congratulate him for subverting our expectations yet again. But if it’s more than that, then my wholesome Fridays might have a touch of the supernatural to them. I am equal parts excited and nervous to see where TONIKAWA will go.

How do you think TONIKAWA will end? Let us know in the comments below!