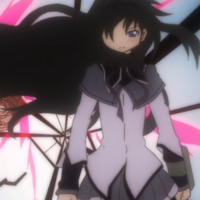 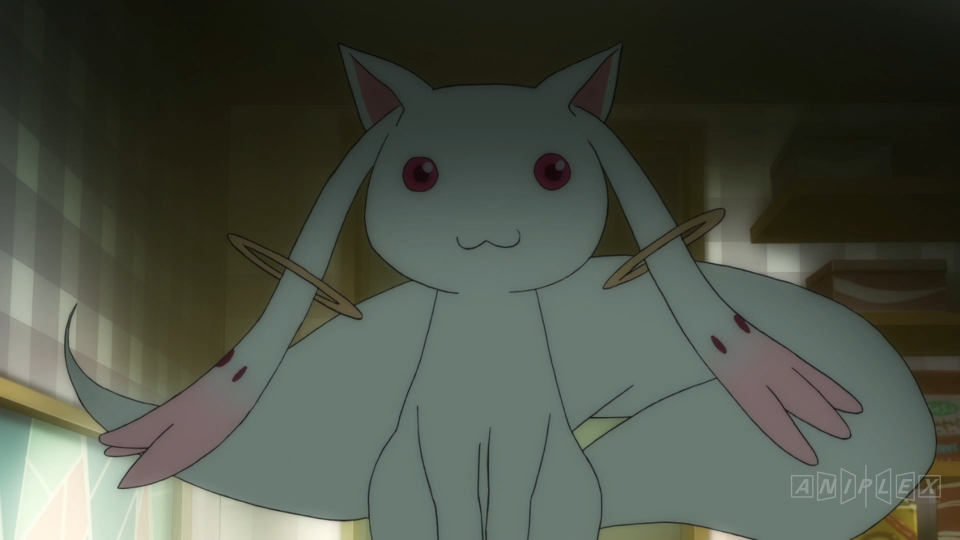 Beware! This article contains spoilers for the beginning of Puella Magi Madoka Magica.

It is January 21st, 2011. In the shadows of a witch’s labyrinth, two girls named Madoka and Mami form a close bond. Mami is a magical girl, powerful but lonely. Madoka decides, then and there, to fight by Mami’s side. But then, in the middle of combat, the witch Charlotte transforms into a giant worm and bites off Mami’s head. Madoka’s eyes widen in shock. A broken china cup seeps tea on the ground. Smash cut to the wails of goth rock trio Kalafina as black clouds roil and a single flickering shape strides toward oblivion. Three episodes in, Puella Magi Madoka Magica threw down the gauntlet. Over ten years later, the mark it left is still there.

Puella Magi Madoka Magica was special. But why? Not because it was the “first dark magical girl series.” Sailor Moon, the modern magical girl standard-bearer, became popular not just because of its charming characters but because the show could do things like briefly kill everyone during the series finale. Even magical girl series aimed at younger audiences, like Ojamajo Doremi, tackled subjects like the death of a pet or the aftermath of a divorce. Not to mention the infamous 46th episode of Magical Girl Minky Momo from 1983, when the titular heroine was hit by a truck! Truly, everything has been done before.

The secret to Madoka Magica’s success is that it is not really a magical girl show. It is a suspense thriller cunningly disguised as a magical girl show. It has as much in common with Kamen Rider Ryuuki as it has with Sailor Moon, and was written by Gen Urobuchi, a former eroge game writer who ran in the same circles as Kinoko Nasu and Hoshizora Meteo. Madoka Magica is not interested in the slow process of endearment by which magical girl series ease you into the daily routines of their characters — the weekly monsters, transformation stock footage, holidays, and very special episodes. It presents as such only as long as it takes to put you off guard, and then (clad in the gorgeous raiment of art team Gekidan Inu Curry) it goes for your throat. 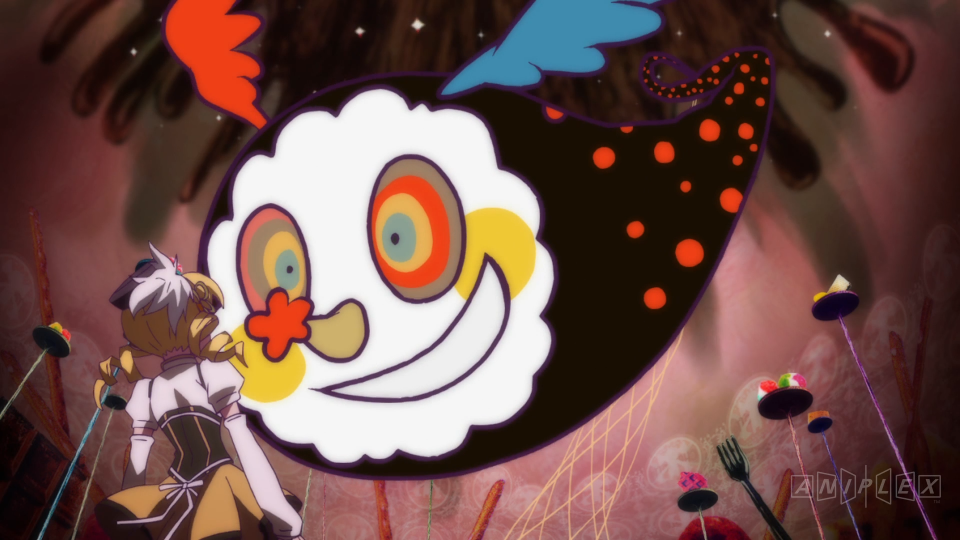 So it was that Madoka Magica became the standard-bearer of a new kind of late-night anime. Rather than “cute girls doing cute things,” let’s call this genre “cruel things happening to cute girls.” Take something charming and unassuming, like a magical girl story or a high school slice-of-life show. Populate it with fun, marketable characters. Then set those characters screaming when the real story pops out like a jack-in-the-box. The frisson between cute and scary hopefully generates enough charge to catch the attention of audiences, but  — most importantly  — audiences don’t have to reach that far to engage with it. That is because these shows are built off those same conventions that anime fans are familiar with. Those conventions just happen to be evil this time.

As often happens in the entertainment industry, the success of Madoka spawned many copies. These projects did not have Gen Urobuchi, and they were often not lucky enough to have an art team as singular as Gekidan Inu Curry. All things considered, they tried their best. YUKI YUNA IS A HERO brought a different former eroge game writer, Takahiro, on board. Magical Girl Spec-Ops Asuka made its team of magical girls a proper military unit. More recently, GRANBELM added giant robots to the stew. I’d say Granbelm is my favorite of these, if only because the giant robots were pretty cool! I’d love to see them in a Super Robot Wars game one day. 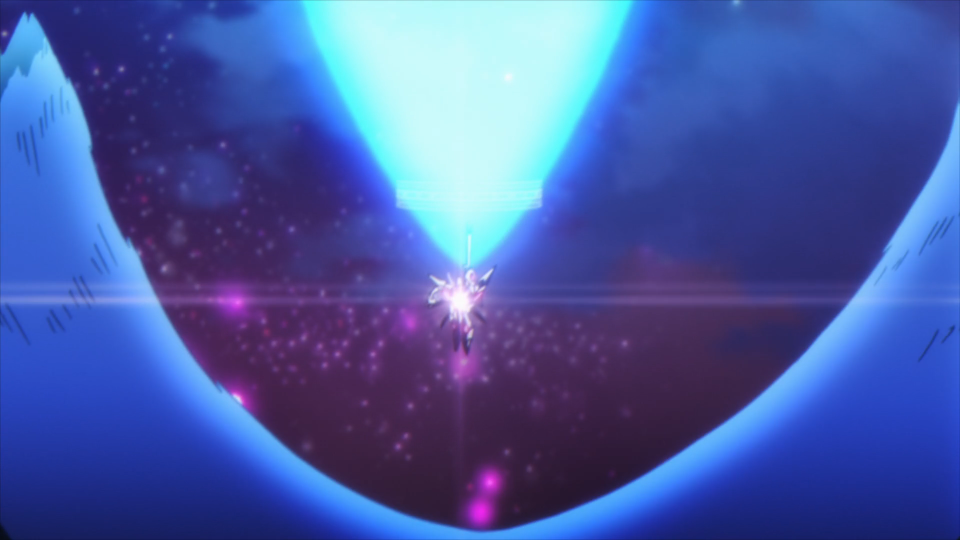 Some of the more interesting entries in the “cruel things happening to cute girls” genre didn’t have any magical girls in them at all. Selector Infected Wixoss was a card battle show about teens fighting for wishes; writer Mari Okada smartly changed focus from the cruel system tearing the characters apart to the way that individual selfishness keeps cruel systems running perpetually. SCHOOL-LIVE! featured a group of schoolgirls continuing their slice of life activities within a world devastated by a zombie apocalypse; the anime production was bolstered by a murderer’s row of writers from Nitroplus, Urobuchi’s former stomping ground. Episode 3 — a flashback to teacher Megumi on the day of the outbreak — is a genuine triumph, precisely because it is so earnest. Rather than pushing hard to shock or disgust the viewer, it allows the characters to breathe in the moments leading to disaster and lets the horror come naturally.

Traditional magical girl shows, in the meantime, have been doing just fine. We’ve seen several good seasons of Precure and two fantastic ones, the all-rounder Go! Princess Precure and uneven but groundbreaking Hugtto! Precure. Sailor Moon’s Crystal remake seasons and movies have steadily improved after a rocky start. The first few seasons of magical idol series Aikatsu are charming and introduce a fun legacy quirk that ties together characters from different seasons. Even Ojamajo Doremi has seen a follow-up film that puts the spotlight on the generation who grew up watching it. 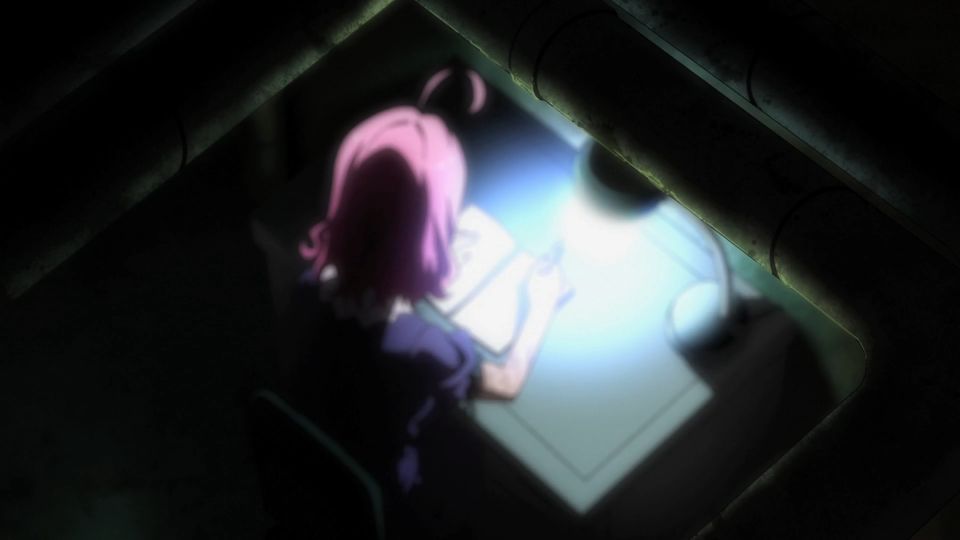 Madoka’s successors, on the other hand, are in a trickier place. Some of them have been successful, others have been good, but none have recaptured that lightning in a bottle that made Madoka a hit. Even a recent Madoka Magica series based on a phone game, written by Gekidan Inu Curry themselves, came and went without much buzz.

In the years since Madoka aired, there have been plenty of folks who have expressed their reservations about the “cruel things happening to cute girls” genre. After all, magical girl series can be revolutionary or transgressive without being cruel. Hugtto! Precure introduced the series’ first male Precure (equally comfortable wearing dresses as skating outfits) and featured a romantic partnership between two of its female leads. Go! Princess Precure’s best fight scenes are as spectacular as anything in this year’s Jujutsu Kaisen, yet remain perfectly accessible for its target audience of young girls. Madoka's progeny may have been targeted at older — and often, male — audiences, but outside of some blood and gore just a few of these series were more genuinely mature than the children’s series they riffed upon. 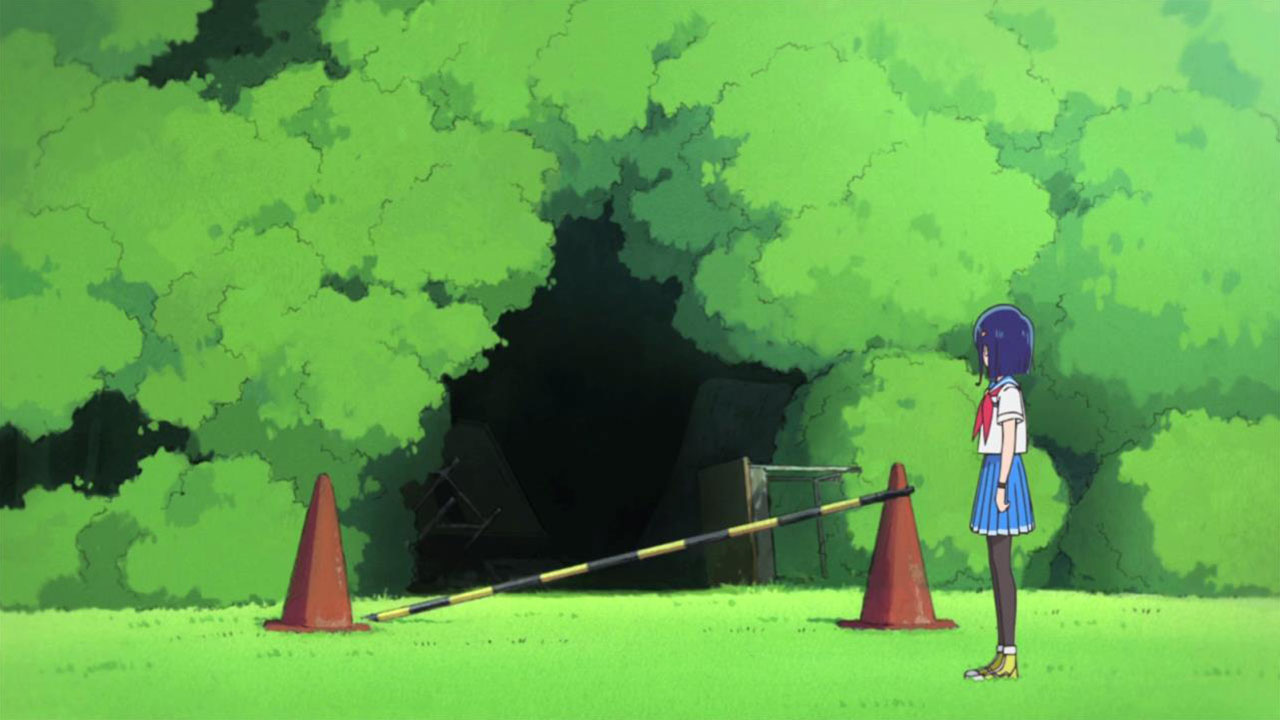 I do still see a future for late-night magical girl shows. In 2016, a weird magical girl series called Flip Flappers aired. Directed by animation wunderkind Kiyotaka Oshiyama, it featured two girls in love traveling through many strange and colorful environments in search of macguffins. Hidden inside a candy coating of marketable elements was everything from the Freudian fairy tale theories of Bruno Bettelheim, to architectural oddities such as thomassons, to occult figures like Jakob von Uexkull. Flip Flappers harnessed some of Madoka Magica’s sense of danger, putting its cast into intense and scary situations from the very first episode. But it was not a show about girls being tortured by an evil system; it was a show about girls exploring surreal dreamscapes. A new genre had been created: “cute girls doing weird things.”

Here are the cornerstones for the “cute girls doing weird things” genre: you need girls of course, maybe even magical girls, but the rules behind their magic are nebulous. Rather than take children’s genres and corrupt them, you build out atmospheric settings, drop in the characters, and see what happens next. You give the cast room to express themselves within the bounds of the story, rather than leading them down an assembly line to their doom. The malevolence of Madoka is not off-limits, but more useful still than malevolence is uncertainty. The goal is to unsettle the viewer rather than disgust them. 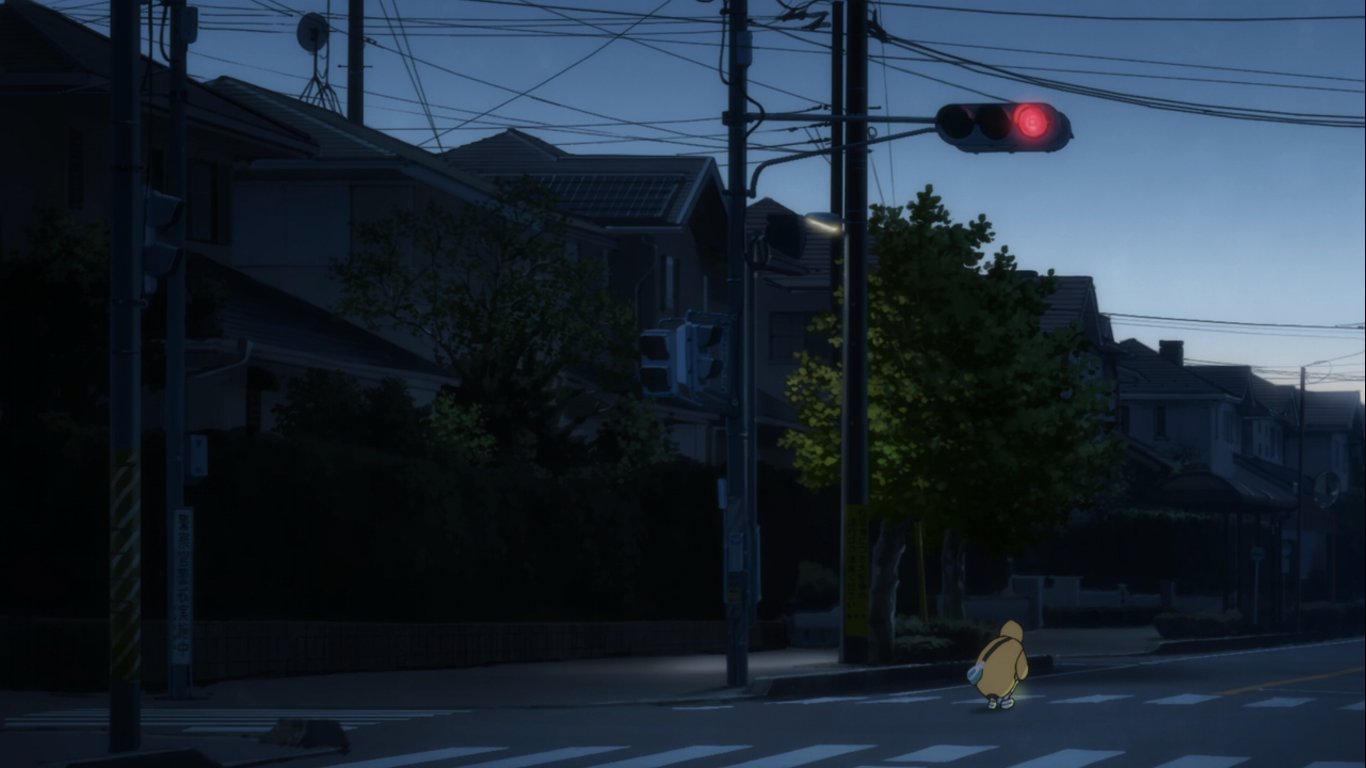 Five years after Flip Flappers, a new show walks these same steps: Wonder Egg Priority, an original series from CloverWorks. Of course, Wonder Egg Priority is aiming at something totally different than Flip Flappers. Its spooky environments are incidental. Its main aim is, through riffing on the work of Kyoto Animation and famed director Naoko Yamada, depicting in full and uncompromising detail the difficult emotional lives of teenage girls living in the modern-day. Those lives just happen to be filtered through an anime lens of trauma manifesting as horrific creatures that have to be destroyed, and girls that need to be saved. Yet to me, Wonder Egg Priority captures the dreamlike atmosphere that Flip Flappers achieved in its best moments — the means by which characters exploring unfamiliar spaces reveal themselves in new and different forms. Despite being made of familiar parts, in execution, I think it is something new.

Somewhere between Flip Flappers and Wonder Egg Priority lies the future of late-night magical girl shows. They should not ever replace the ones made for kids; those do perfectly fine on their own, thank you very much. But in their embrace of uncertainty, I recognize a ghost of what I once felt when I first saw Charlotte’s gaping maw. The sensation that the ground had disappeared, and that — like magic — anything was possible.

What's your favorite recent magical girl show? Are you excited for the newest season of Precure? Does Wonder Egg Priority terrify you on a weekly basis like it terrifies me? Let us know in the comments!

Adam W is a Features Writer at Crunchyroll. When he isn't reciting lines from Revolutionary Girl Utena, he sporadically contributes with a loose coalition of friends to a blog called Isn't it Electrifying? You can find him on Twitter at @wendeego