Let's explore the evolution of one of the most fascinating Straw Hats! 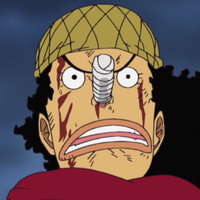 Hello everyone, and welcome to Why It Works. Over the past couple months, I’ve been powering through One Piece at breakneck speed, journeying from the early crew recruitment through the end of Enies’ Lobby. After my earlier attempts at breaking into the series sputtered out, I’m finally learning what so many fans already know: One Piece improves at an absurd rate over its first several arcs, polishing and expanding in basically every way a narrative can. Nowhere is that evolution more clear than in the journey of the Straw Hats’ most unlikely crewmate: Usopp the Liar. 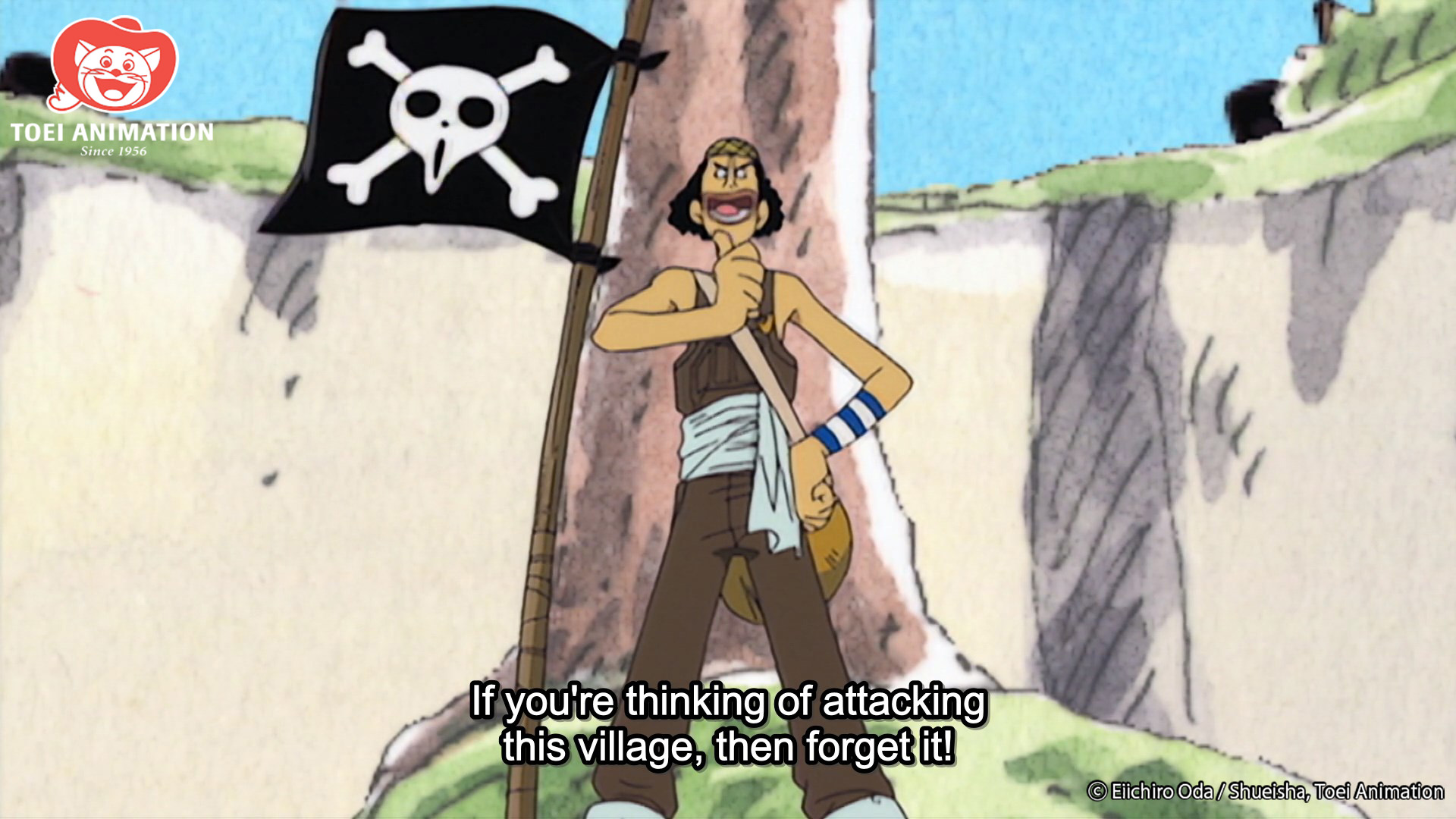 When Usopp first entered the crew, I frankly found him pretty obnoxious. He appeared to be an icon of the kind of loud, slapstick comedy you frequently find in battle anime, which doesn’t have much appeal to me. Additionally, it was clear from the start that he couldn’t measure up to titans like Luffy or Zoro in terms of physical strength, and given his clownish disposition, I feared he was destined to be relegated to the peanut gallery — one of those characters who can only stand on the sidelines, cheering for the actual heroes to succeed.

As it turns out, while Usopp is a bit of a clown, he ultimately proved to more often play the opposite role. While Luffy, Zoro, or Sanji might happily engage in some ludicrous, death-defying shenanigans, Usopp could generally be found on Nami’s side, playing the straight man to their ridiculous ideas. The reason for that would neatly resolve my second concern — both One Piece and Usopp himself are perfectly aware of his own fragility. While many of the Straw Hats are superhumans enjoying a superhuman adventure, Usopp is a normal human on a superhuman adventure, with all the incessant peril that would involve. 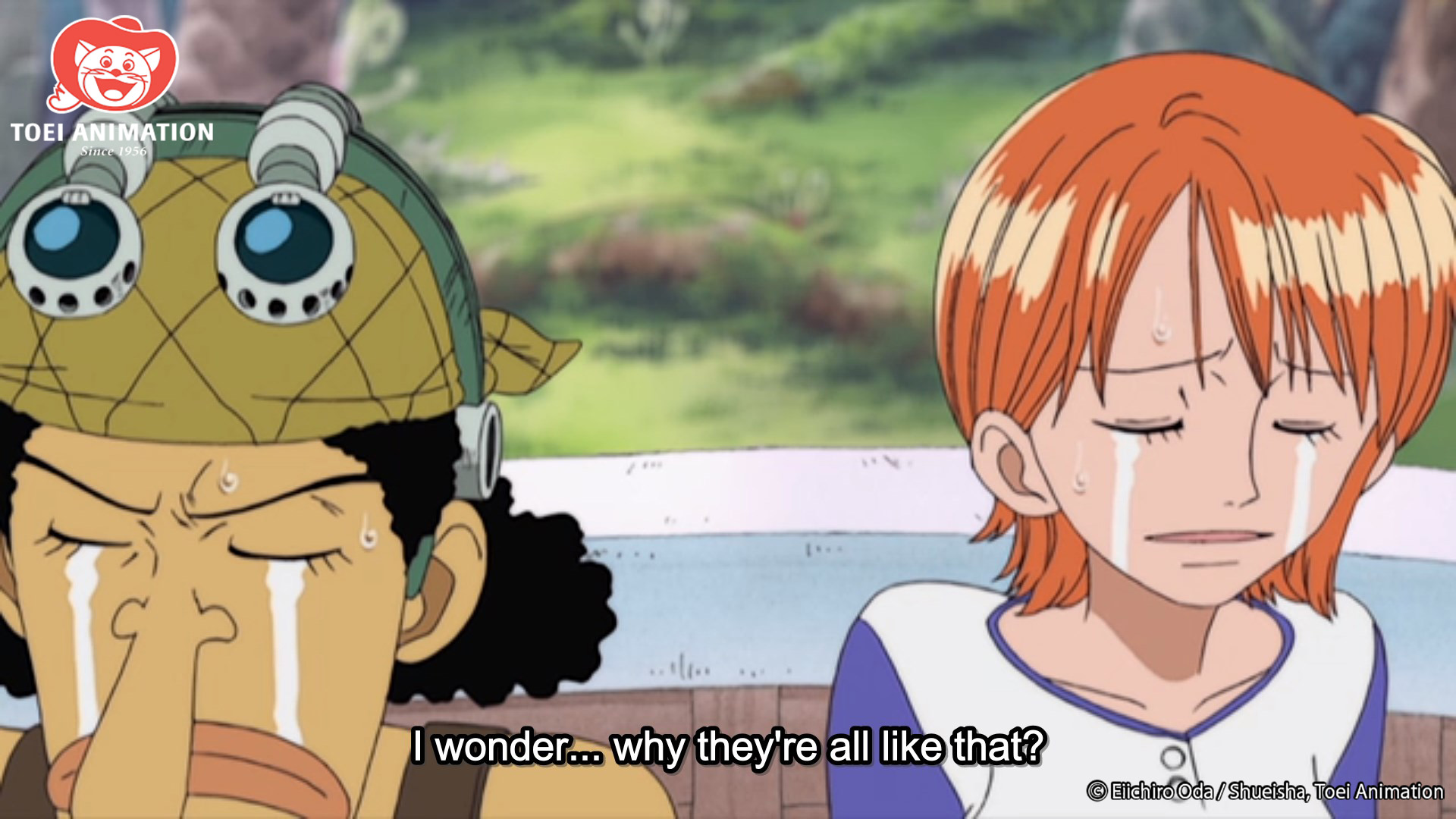 The wildly uneven strengths of the Straw Hats is actually one of the more interesting things about One Piece. Not all of the Straw Hats are fighters; they’re first and foremost a ship’s crew, with several members more suited to maintenance or navigation than combat. Because of this, the non-combat-oriented crew members frequently have to find ways to contribute that avoid direct fighting. Over the first several arcs, Usopp offers sharpshooting, basic engineering, misdirection, and a profound talent for making friends with strange, dangerous creatures.

Rather than being a dramatic drawback, this uneven power distribution actually becomes one of One Piece’s signature strengths. With this need for dramatic flexibility baked into the very fundamentals of its cast dynamics, One Piece is essentially required to come up with conflicts more complicated than “all of our guys fight all of their guys,” offering far more narrative creativity and complexity than your average action property. At the same time, this imbalance also helps emphasize the scale of a world like One Piece, wherein a character like Usopp will perpetually be staring up at giants he could never hope to face. 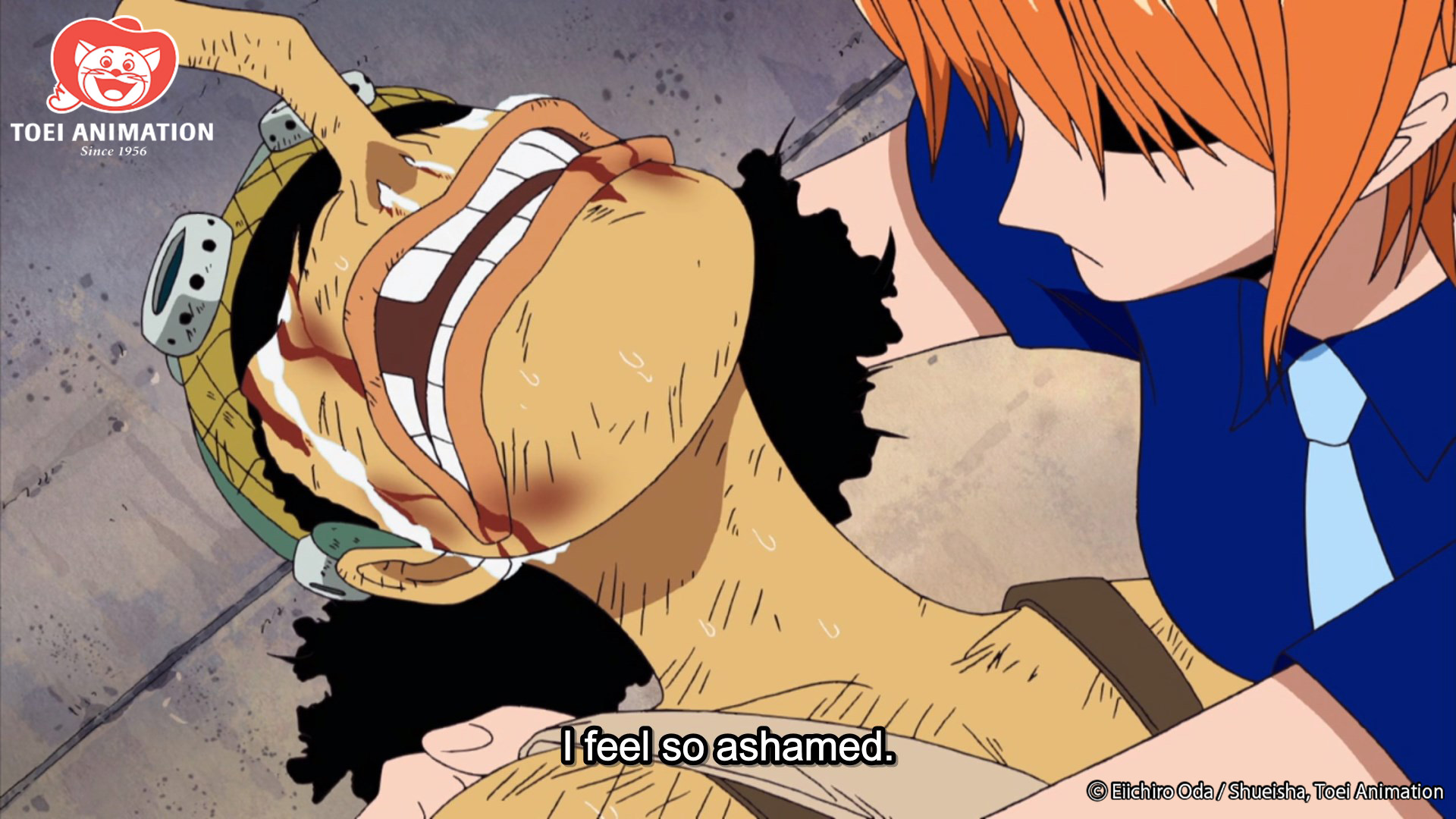 Eventually, Usopp’s persistent efforts to prove his worth as a crewmate fall short, and he begins to internalize the futility of his situation. By the time the Straw Hats reach Water 7, their journeys have long since lost their original playfulness and even mightier monsters are looming on the horizon. His journey echoes that of the Going Merry itself; beaten and bruised, he no longer has the strength to match up with their challenges or the hope of ever being a “great warrior” like them. His ultimate goal is the point they’re starting from, as they gaze toward challenges he could never even imagine. And thus, when Luffy makes his well-intended but deeply misguided speech about abandoning the Merry, Usopp explodes.

Usopp clearly loves the Merry, even more so than any other member of the Straw Hats. They essentially “joined the crew” at the same time, and the ship had been not just his friend, but also perhaps his most essential role within the crew. Though Usopp was not a shipwright, he took maintaining the ship as a clear point of pride, something that was usually all too rare on their journeys. 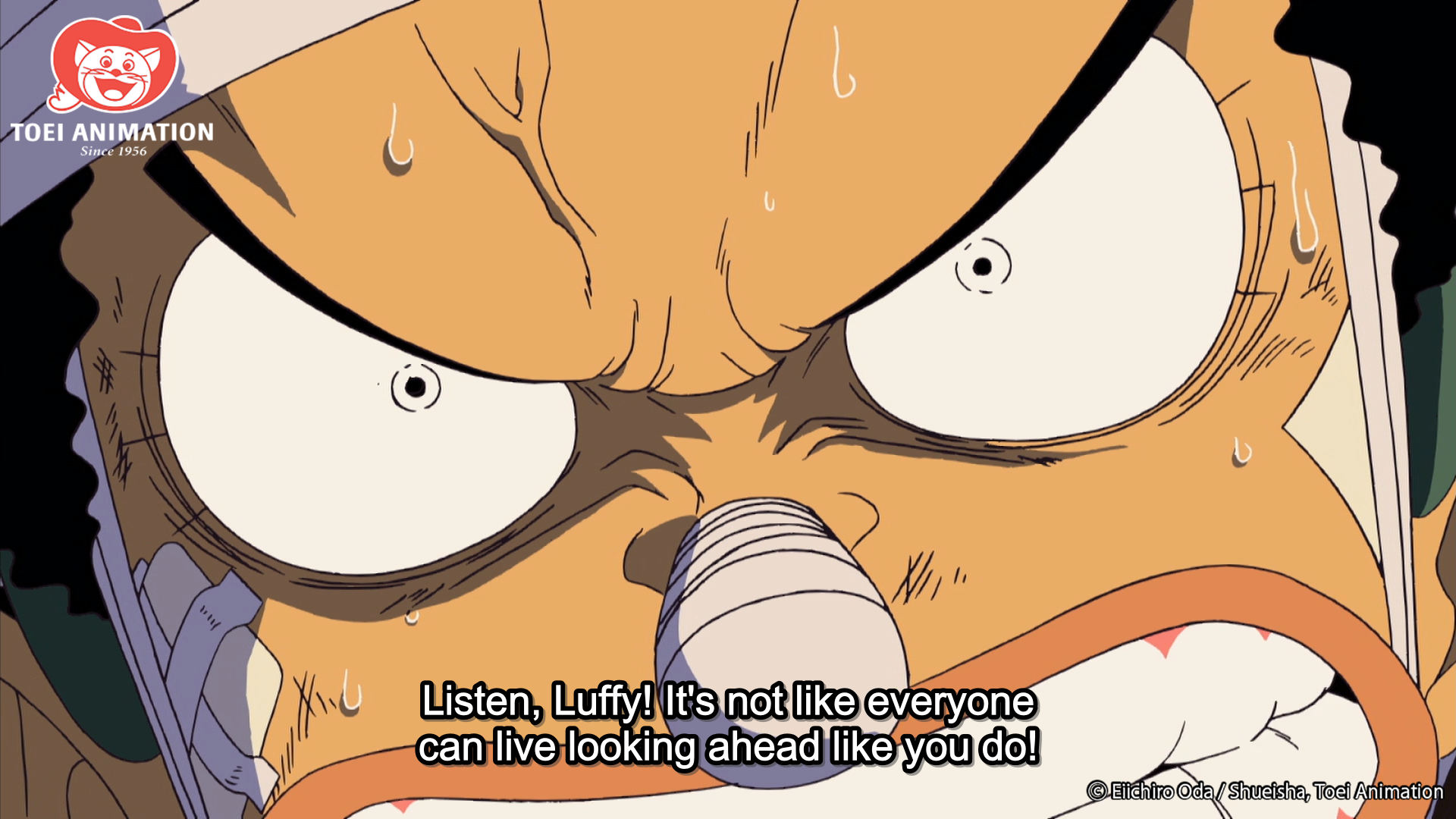 But more than his feelings about the Merry itself, Usopp personally relates to the Merry. He sees himself in their ship — a creaky, amusing companion who’s journeyed with them this far, but simply doesn’t possess the strength to help them any longer. Luffy’s dismissal of the Merry feels like a dismissal of him, and the anger of his own response reflects his understanding that Luffy is right. Usopp isn’t really strong enough for this journey anymore and doesn’t really have any skills they could not replace. He’s not an indispensable member of the Straw Hats, he’s just Usopp — and he suspects, if Luffy were willing to be as pragmatic about his crewmates as his ship, Luffy would likely toss him off too.

It’s a hard thing to come face to face with your own limitations like that, and harder still when the verdict comes from the person you respect the most. Usopp does not accept this situation with dignity; he rages against it, blaming Luffy for his callousness, and literally fighting his captain to prove he can measure up in this world. Given his admitted understanding of both his and the Going Merry’s limits, you could perhaps consider this his way of saying goodbye — of giving the crew an excuse to leave him by leaving first and thus taking the blame upon himself. So certain of his inadequacy, perhaps this is the only way he thinks he can still help the Straw Hats. 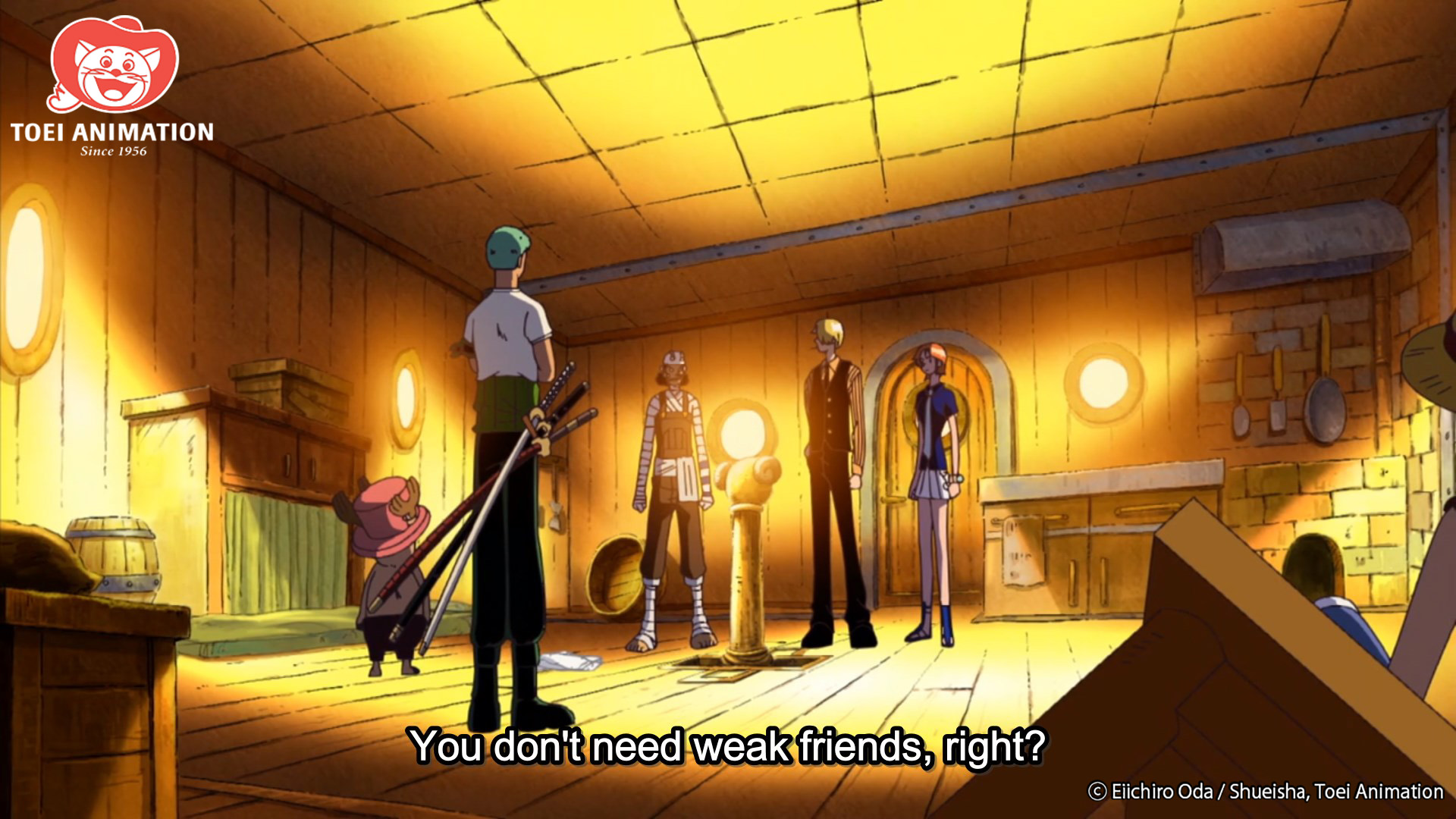 But ultimately, fate intervenes. Captured first by Franky’s family, and then by the World Government, Usopp finds himself taking part in the Straw Hats’ next adventure in spite of himself. Though he truly believes he is not strong or brave enough to be a Straw Hat anymore, he no longer has the choice to abandon their adventure. And so, Usopp defends himself the only way he can, by employing a power he’s been cultivating since his very first episode.

Usopp lies. He has always been a teller of tall tales, bragging of the foes he’s bested and giants he’s befriended — but now, surging across the tempestuous seas of the grand line, he is in a world of true giants. In order to believe he belongs here, he lies — both to his crewmates and to himself. He puts on a pointed mask and dons the mantle of Sniper King, the hero of countless battles, whose brave feats on Sniper Island and legions of followers mark him as a clear equal of the Straw Hats. 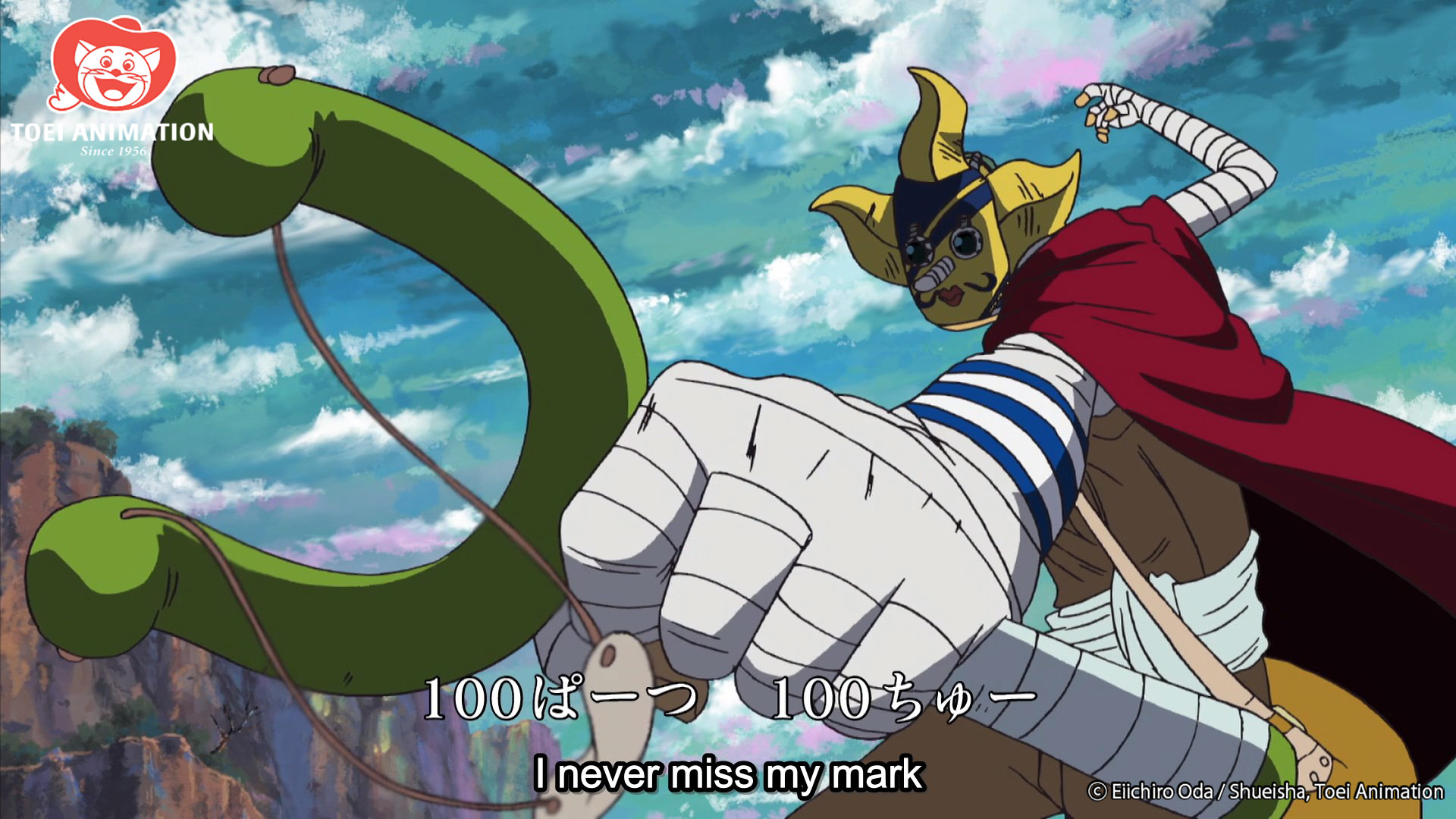 Usopp might not be strong enough to be a Straw Hat, but Sniper King can be. After all, Sniper King is as strong as Usopp says he is. Usopp uses his signature talent to ultimately fool himself, proclaiming himself strong and brave, and through doing so forcing himself to embody those qualities. If his conflict is a crisis of faith, then he just needs a new symbol to believe in. Usopp might not truly be on par with the other Straw Hats, but if he can force himself to believe he is, then perhaps the difference is negligible.

Having given himself permission to believe he is Straw Hat material, Sniper King goes on to prove that he really is Straw Hat material. Not with his combat strengths — among the Straw Hats, he alone doesn’t defeat a member of CP9. Instead, he chips in with all the strengths he’s been cultivating so far, the various oddball strengths that nonetheless add up to an essential teammate. His upgrades to Nami’s weapon allow her to win multiple battles. His kind and courageous heart win him the friendship of the Lobby’s own giant protectors. His genuinely formidable sniping abilities keep Robin safe. In the end, his passionate faith in his captain and ability to boast of greatness even in the face of certain death gives Luffy the last, vital push to secure victory. 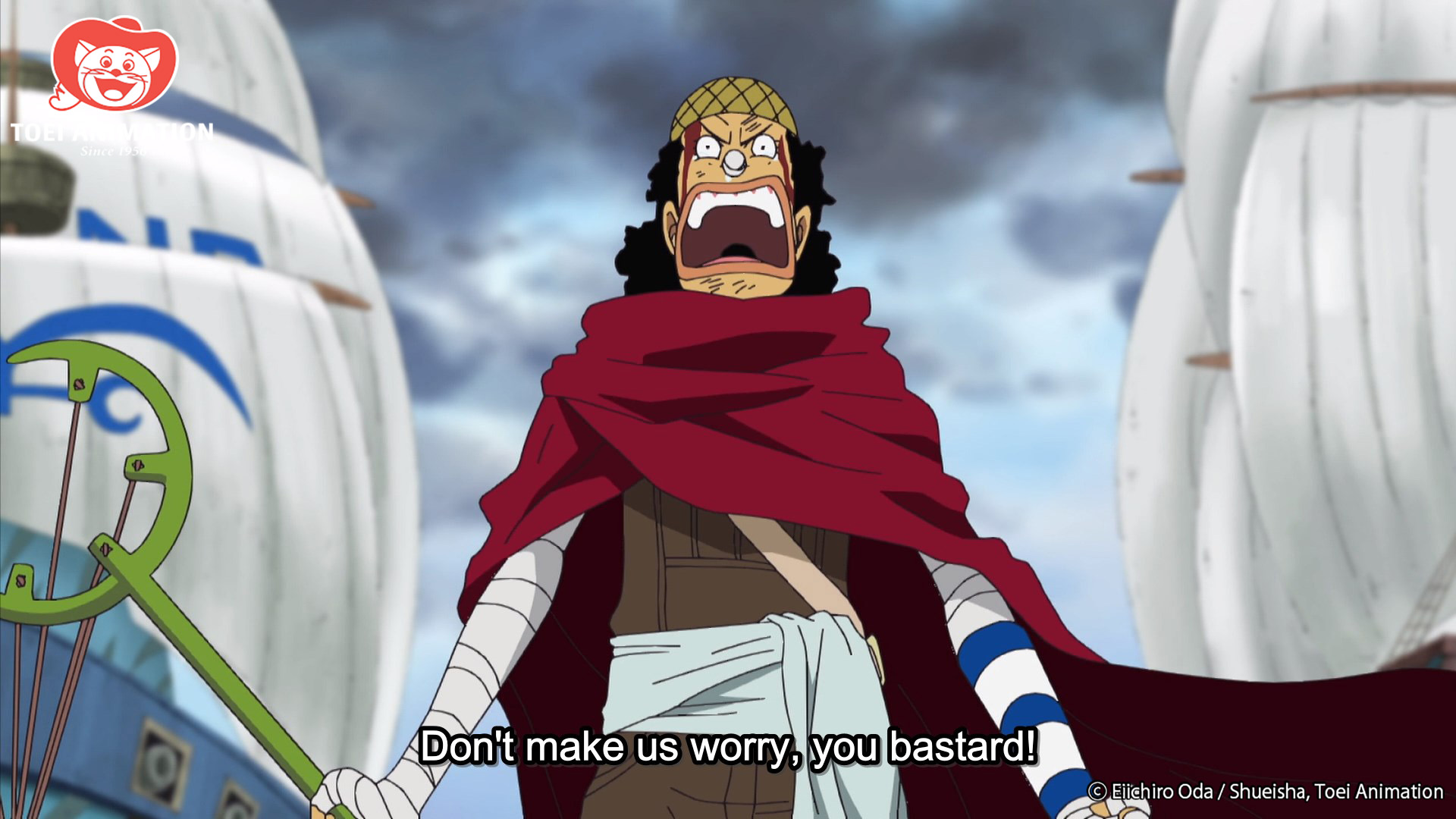 Usopp demonstrates that whatever our natural talents, we are as indispensable as we choose to be. Through his journey, he not only expands One Piece’s dramatic horizons but also illustrates something essential about the nature of bravery and how we construct our self-image. I could easily relate to that sharp terror of not measuring up to my peers and the ways that optimistic lies can help us through impossible circumstances. Usopp embodies the difficulty of believing in yourself, and his journey feels all the more meaningful for just how difficult it was and how great the distance between him and his friends. He’s a remarkably compelling hero and my favorite Straw Hat so far.