OPINION: MUSHI-SHI Helps Me Feel Represented As A Neurodivergent Person 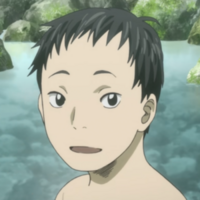 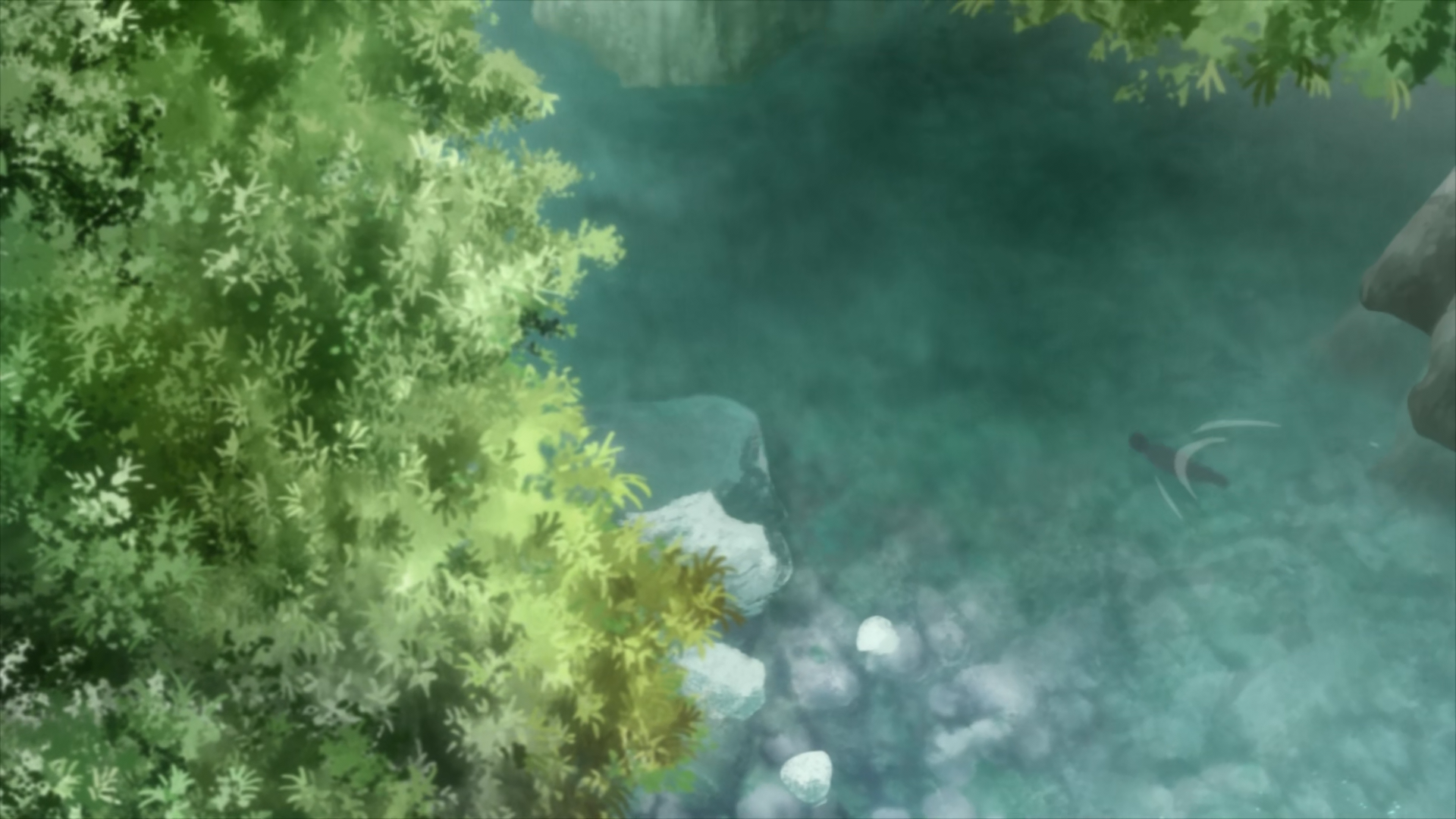 I was born in California. Despite moving to India only five years later, the influence of my US upbringing was massive. It brought with it a disconnect between me and my peers in India when it came to media. While other kids my age read the Panchatantra, I was busy reading Dr. Seuss. While they watched local kids’ shows, I was watching Sesame Street or Barney or something like that. Even later in life, I shunned Bollywood and other forms of local cinema in favor of American films. Perhaps it is this foreignness of the media I consumed that would eventually make me aware of the need for representation.

Representation in media is a touchy topic these days, the source of many an internet debate. It’s a topic I, however, did not pay much attention to until a few years ago. I simply didn’t deem it important. Sure, the vast majority of media I consumed didn’t feature people like me, but that wasn’t really important. Or so I thought. Looking back, I probably didn’t care because I didn’t know what being represented felt like. I wouldn’t know until one day in university when I sat down to watch an episode of what would later become my favorite anime: MUSHI-SHI.

Before diving into the details of the episode, it is important to talk about the kind of series MUSHI-SHI is. I might have prefaced this article with a spoiler warning, but in reality there is no overarching plot to spoil. In fact, you could start your MUSHI-SHI journey with this very episode if you want to. MUSHI-SHI is an anthology of unrelated supernatural mystery cases, the only commonality between episodes being the protagonist, Ginko. We follow Ginko across post-Edo era Japan as he goes from village to village solving cases related to the ethereal beings called mushi that give the series its name. 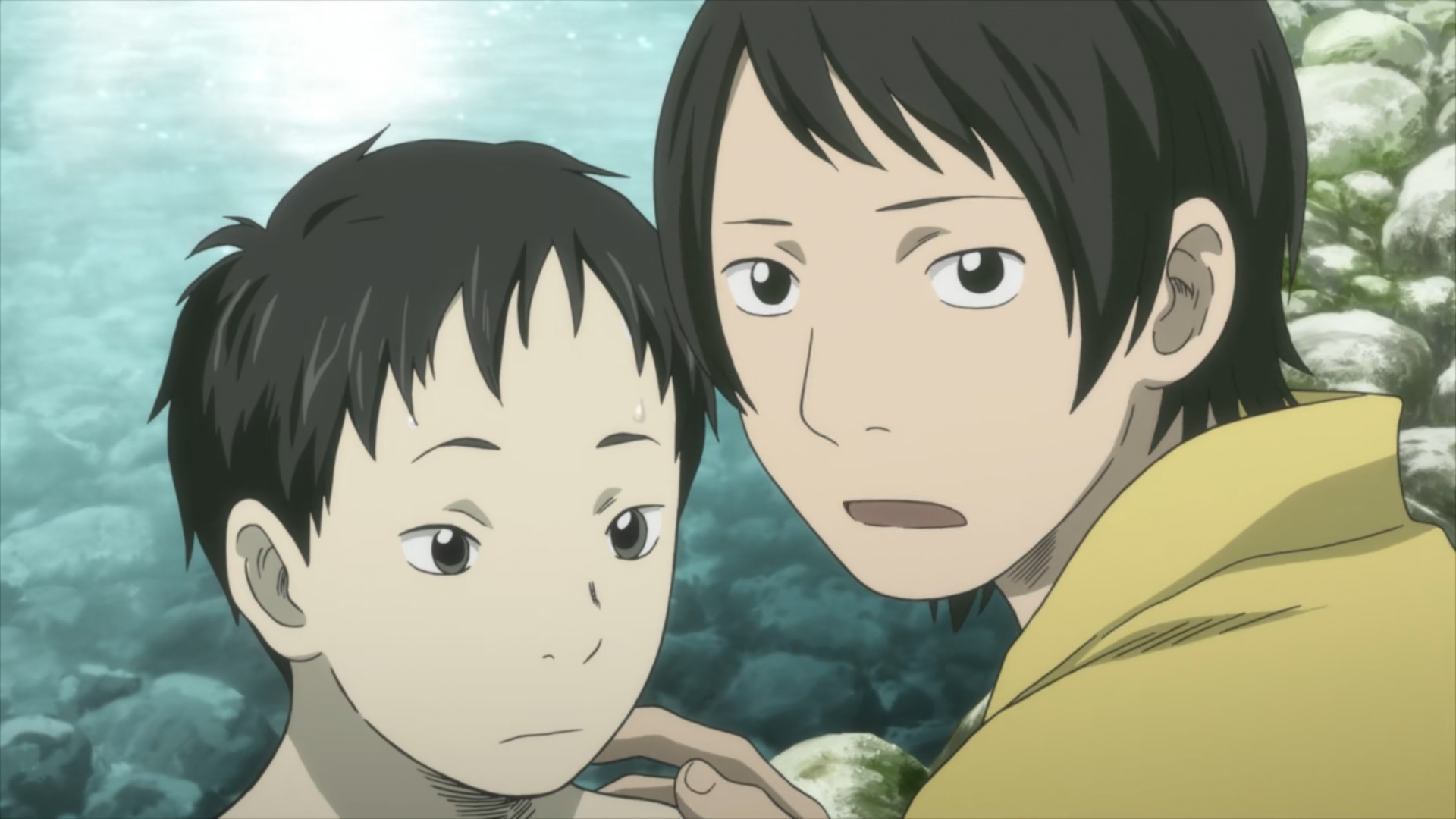 One such foray takes him to a small settlement by a mountain stream. While washing his face, Ginko spots a boy, Yuuta, swimming in the stream, commenting on how the boy swims unusually well. This would prove to be far from the only unusual thing about Yuuta. His body is unexpectedly cold to the touch and his speech is halting and delayed. Ginko immediately senses something is off and asks Yuuta's mother a few questions. Her immediate reaction is to get defensive. She eventually gives in to Ginko's probing and allows him to come home to inspect Yuuta, upon which Ginko realises that Yuuta is infected by a type of mushi called Uko. While Yuuta’s mother is still defensive, she relents when Ginko points out that Yuuta’s differences separate him from the other children. He presents Yuuta’s mother with some medicine before heading off, promising to return with more.

By this point, I hadn’t noticed anything out of the ordinary about this episode. An unusual child, a supernatural problem, human/human conflict, human/mushi conflict — all classic Mushi-shi elements. But then the episode went and did something special. 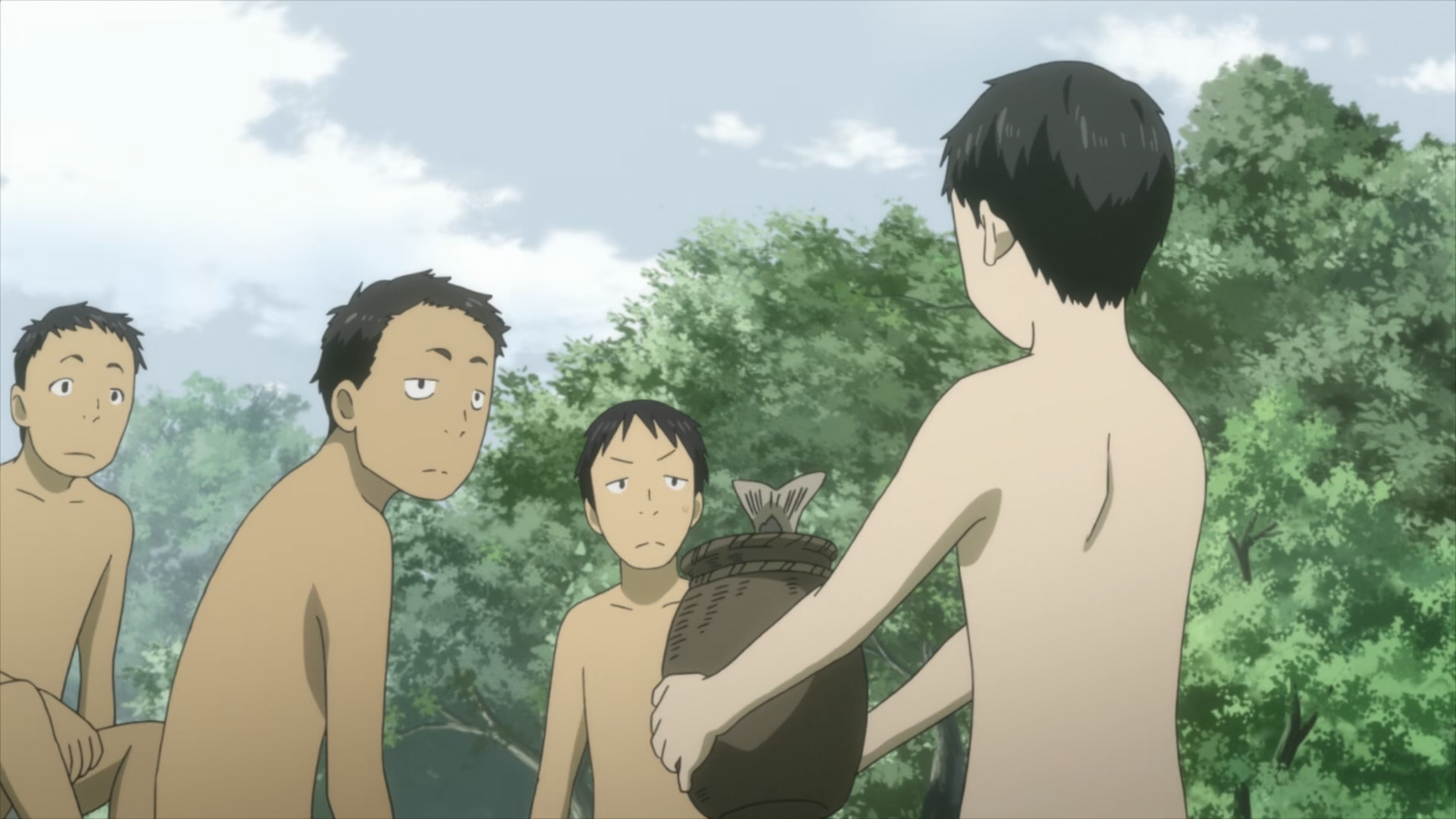 The episode skips ahead in time. Yuuta approaches a group of kids. While they are initially hostile toward him, spouting rumors that he is not even human, he manages to win them over. They even point out that his skin is not as cold as the rumors claimed. Watching all of this, Yuuta’s mother is delighted. Ginko’s medicine is clearly doing its job.

Ginko himself stops by for a visit to check on how Yuuta is doing. Yuuta’s mother gushes about how her son’s Uko symptoms have been significantly reduced. She excitedly asks Ginko for more medicine. Her excitement wanes, however, when Ginko informs her that the current level of improvement in Yuuta’s condition is the best one can really hope for. He points out that Yuuta has not been “cured” by any means; he is merely coexisting with the Uko with a higher level of functioning than before. Ginko speculates that the only way to truly extract the Uko from Yuuta would be during a flash flood, which might force the Uko out as it attempts to reach its final destination: the sea. The disappointment on the face of Yuuta’s mother is evident but she does her best to hide it.

Time passes by. Suddenly, a flash flood engulfs the region, forcing Yuuta’s mother to make a choice: attempt to “cure” Yuuta or not? Ginko offers to help — only if she wants to, that is. Deep down, it’s what she’s always wanted. Braving the rising waters, she and Ginko attempt to hold Yuuta down while the flood passes by, hoping for the Uko to emerge from his body. 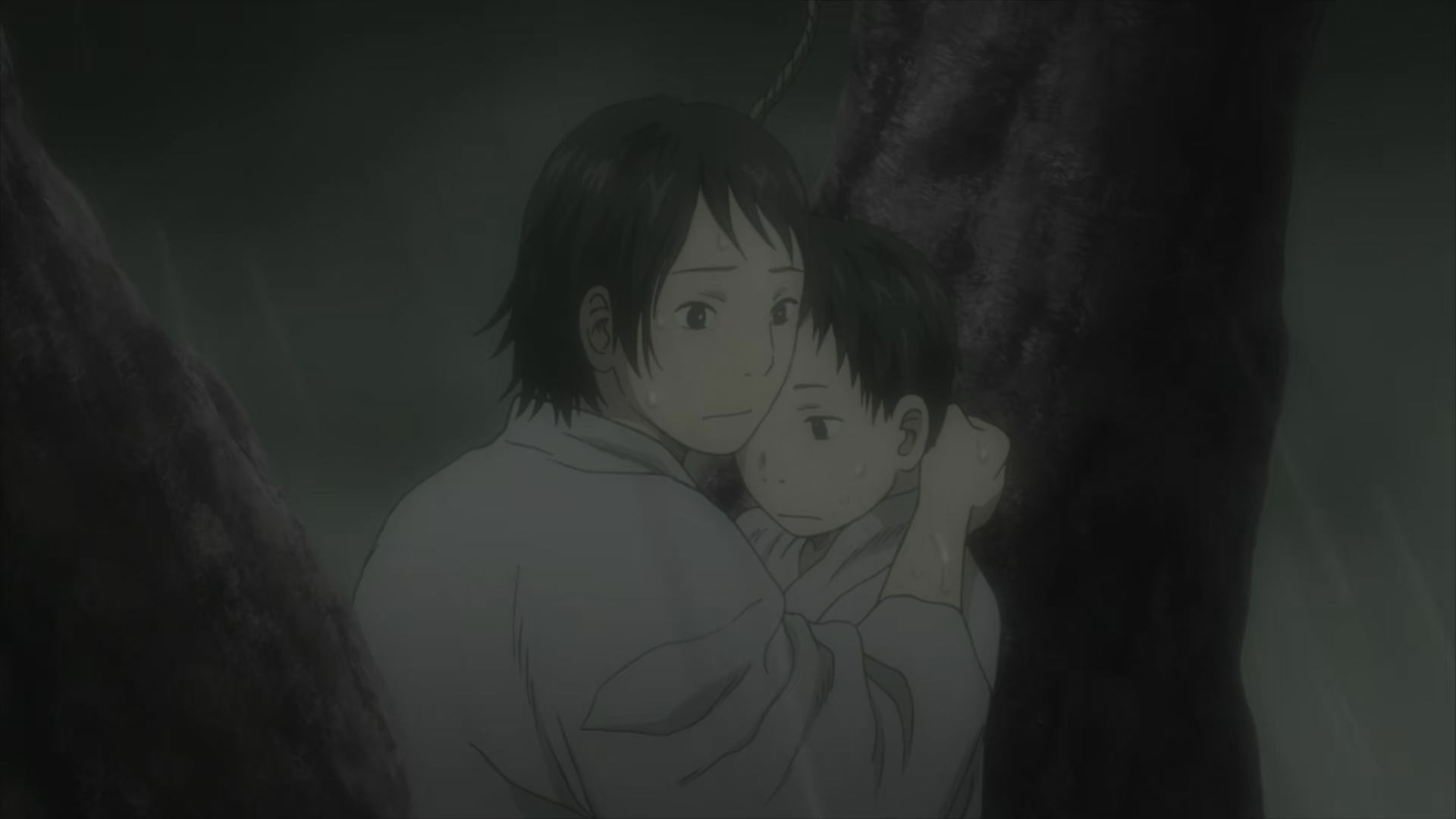 Something about this scene made me incredibly uncomfortable. Partly because I could sense something bad would happen next and partly because of something else.

When Yuuta emerges from all this unscathed, I thought my worrying was for nothing. “It’s not scary anymore,” he asserts. Was this attempt to “cure” him successful? Far from it. Ginko notices Yuuta’s body is burning up in the sun’s heat. Before any of them could do anything, Yuuta’s body simply evaporates, leaving behind nothing but his clothes and his shell-shocked mother.

I was devastated. The worst came to pass, confirming my earlier fears. But was that the only reason I felt so discomfited at that time? The answer would dawn on me much later.

Why were they trying to “cure” someone who didn’t need curing?

I would never view this episode the same way again. 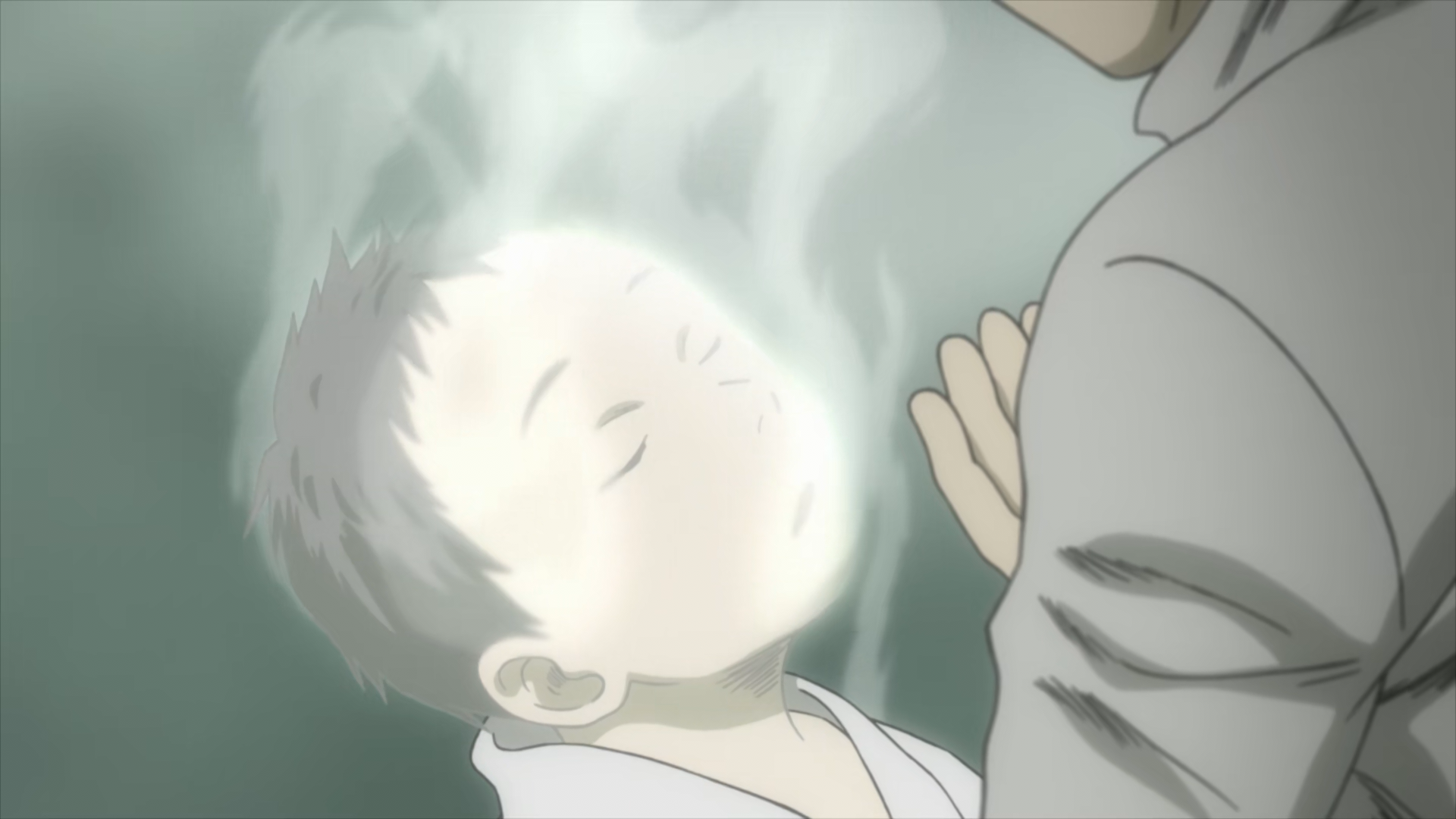 I probably need to explain a few things at this point. While I would only be diagnosed with autism spectrum disorder well into adulthood, even as a child I knew there was something that separated me from other children. An invisible barrier of sorts that prevented me from being “one of the boys.” I was “different.” Certainly not “normal.” Despite all that, I can’t think of a single instance where I have felt the desire to be “normal.” I am atypical. It’s messy, but I like it this way. Sure, there are aspects of everyday life I struggle with, but it’s all part of who I am now, my identity. I’d never trade that in for “normalcy.”

This brings me back to Yuuta. In my subsequent viewings of this episode (I have watched it at least ten times), I couldn’t help but associate aspects of his personality and behavior with those of neurodivergent people such as myself: his halting speech, his difficulty socializing, his obsession with water. The way he improved with medication and the way he awkwardly made friends afterward. While I can’t speak for the true intent of the author, Yuki Urushibara, I found Yuuta strangely relatable. I found myself cherishing every moment of his. In particular, there’s a sequence where Yuuta is curious about the source of the stream. After his mother explains the water cycle to him, a question pops into his head. “Then are the sea, river, rain, and clouds all the same thing?” “Yes,” says his mother. “They look different, but they’re all the same.” Upon realizing that her statement applies to Yuuta as well, she hugged him, overcome with emotion — as was I. It’s a touching, subtle statement that really made me feel good about myself deep down. 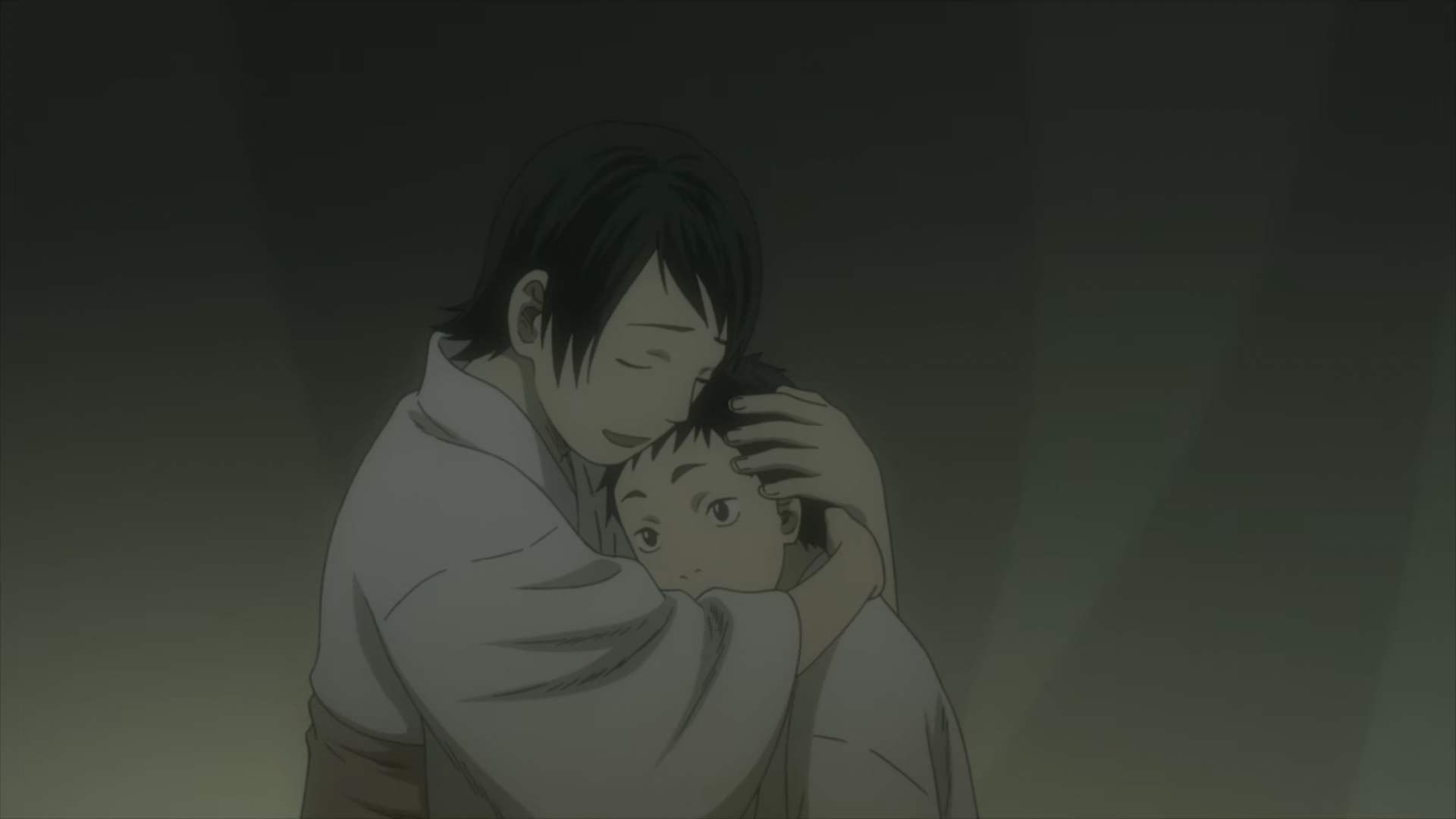 Of course, the good feeling wouldn’t last. I spoke of the medications Yuuta was being administered. Even that felt relatable. It is just as Ginko says: medication will only get you so far. Clearly, however, this halfway solution wasn’t to Yuuta’s mother’s liking. Once she got a taste of what having a “normal” son would feel like, she wanted it all, in sharp contrast to her earlier acceptance of Yuuta’s unusual nature. This is unfortunately reflective of the way many parents of neurodivergent children think. Deep down, they wish for nothing more than for their child to be “normal.” This is particularly true of Asian societies (such as Yuuta’s and mine), where conformity is valued heavily. While on the surface it may seem like a reasonable desire — after all, the parents have been through difficulties too — it ultimately negates the very thing I was taking so much pride in earlier: identity. When you force an atypical person to conform, when you strip them of their “weirdness” and try to transform them into a “normal” person, do they even have an identity anymore? In my view, what this episode is trying to tell us, with Yuuta’s disappearance after his failed “normalization therapy,” is that the child might as well cease to exist at that point.

MUSHI-SHI, of course, is the sort of anime to weigh one’s head down with such heavy thoughts. Over 40 episodes in and it was shaping up to be a masterpiece. There was one problem, though — I hadn’t shed a single tear up to that point. According to my personal rating system, an anime can be a masterpiece only if it made me cry at least once. Would Mushi-Shi fail such a basic criterion?

The episode ends with Yuuta’s mother standing in the stream during a light drizzle. “Yuuta,” she says, despondent. “Where are you? Are you in the river? The sea? Or the rain?” Her voice carries complex emotions: grief, regret, confusion. Suddenly, she remembers Yuuta’s voice. “What’s wrong? It’s not scary anymore,” he seems to say.

She gently feels the water of the stream, then turns her face toward the sky, a look of acceptance on her face. 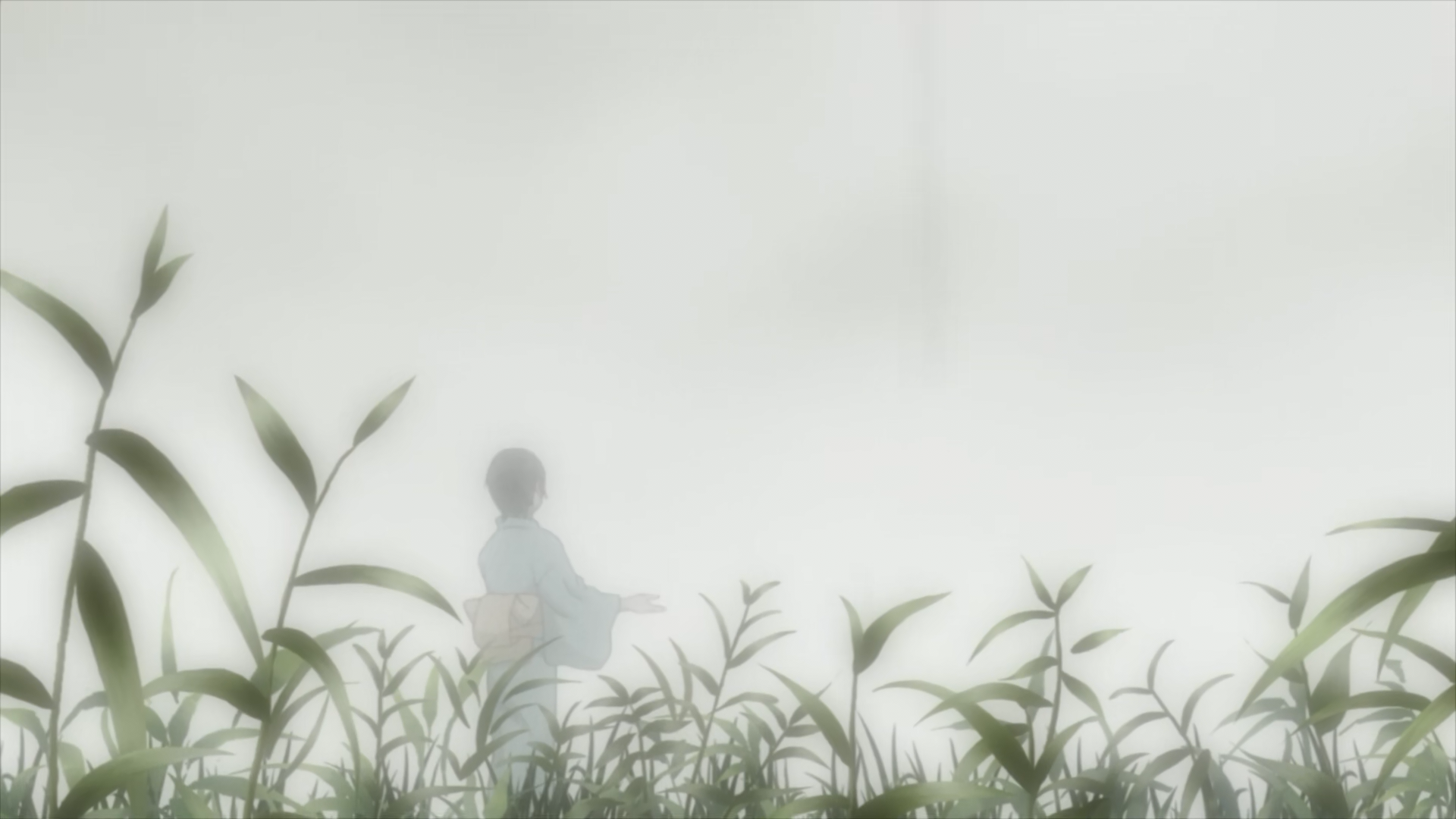 I didn’t fight the inevitable flow of tears. I didn’t stop crying for minutes. It was a fitting tribute to an episode themed around water, one that is surely the greatest anime episode of all time.