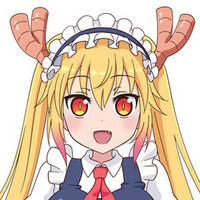 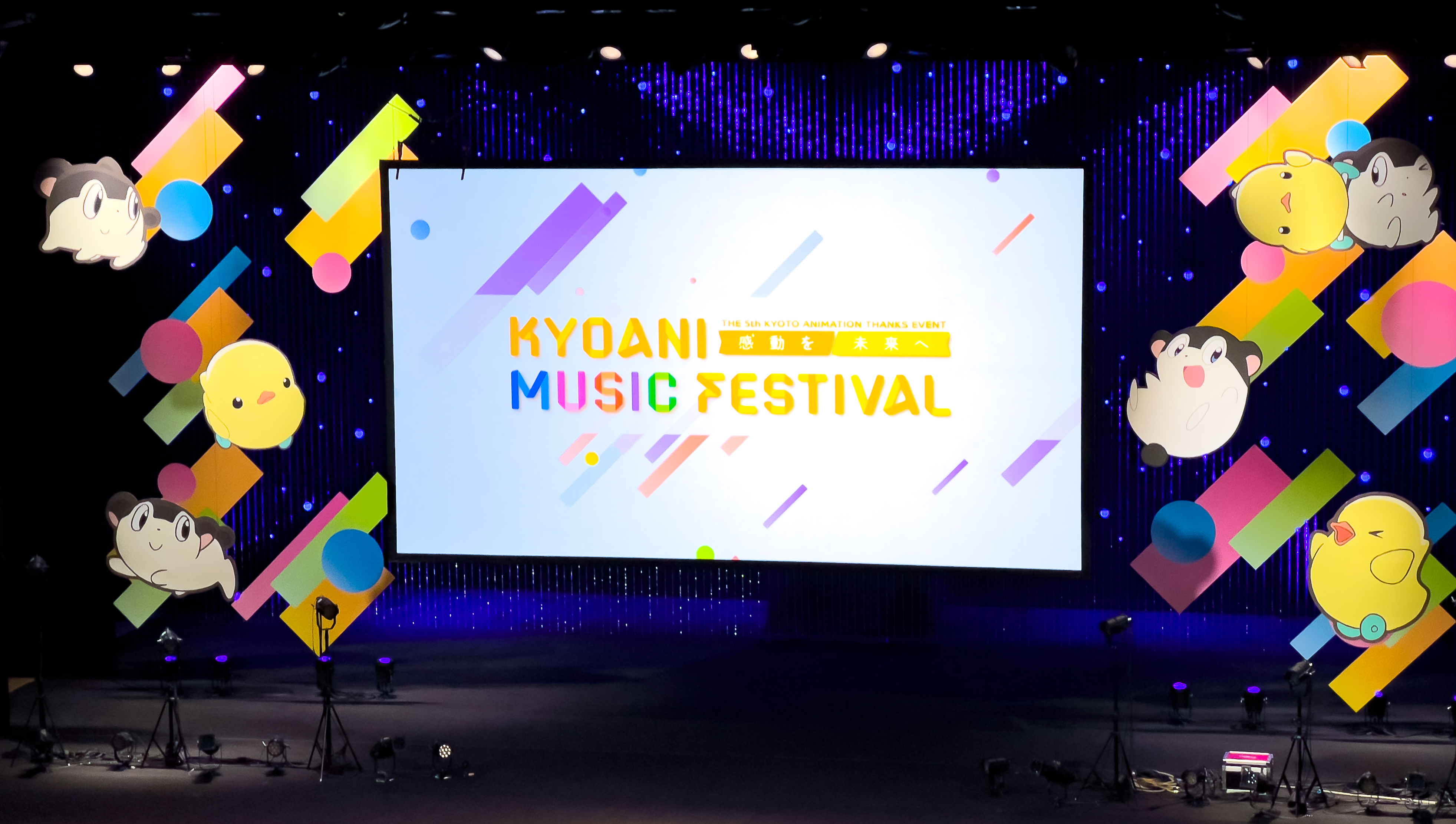 It’s not often that a performance starts with thunderous applause, but for the second day of the Kyoto Animation Music Festival, I couldn’t imagine anything but. As the lights dimmed in the ROHM Theater in Higashiyama, Kyoto, fans were waiting with bated breath — and tissues in their pockets — for the next three and bit hours.

Nearly two years ago to the day, across the road from the theater where the music festival was being held, the last planned Kyoto Animation Thanks Event had been canceled in the wake of the Kyoto Animation arson attack, which took the lives of 36 employees of the beloved studio. A memorial for those who were lost was held in its place at Miyako Messe in 2019. You can read that report here. 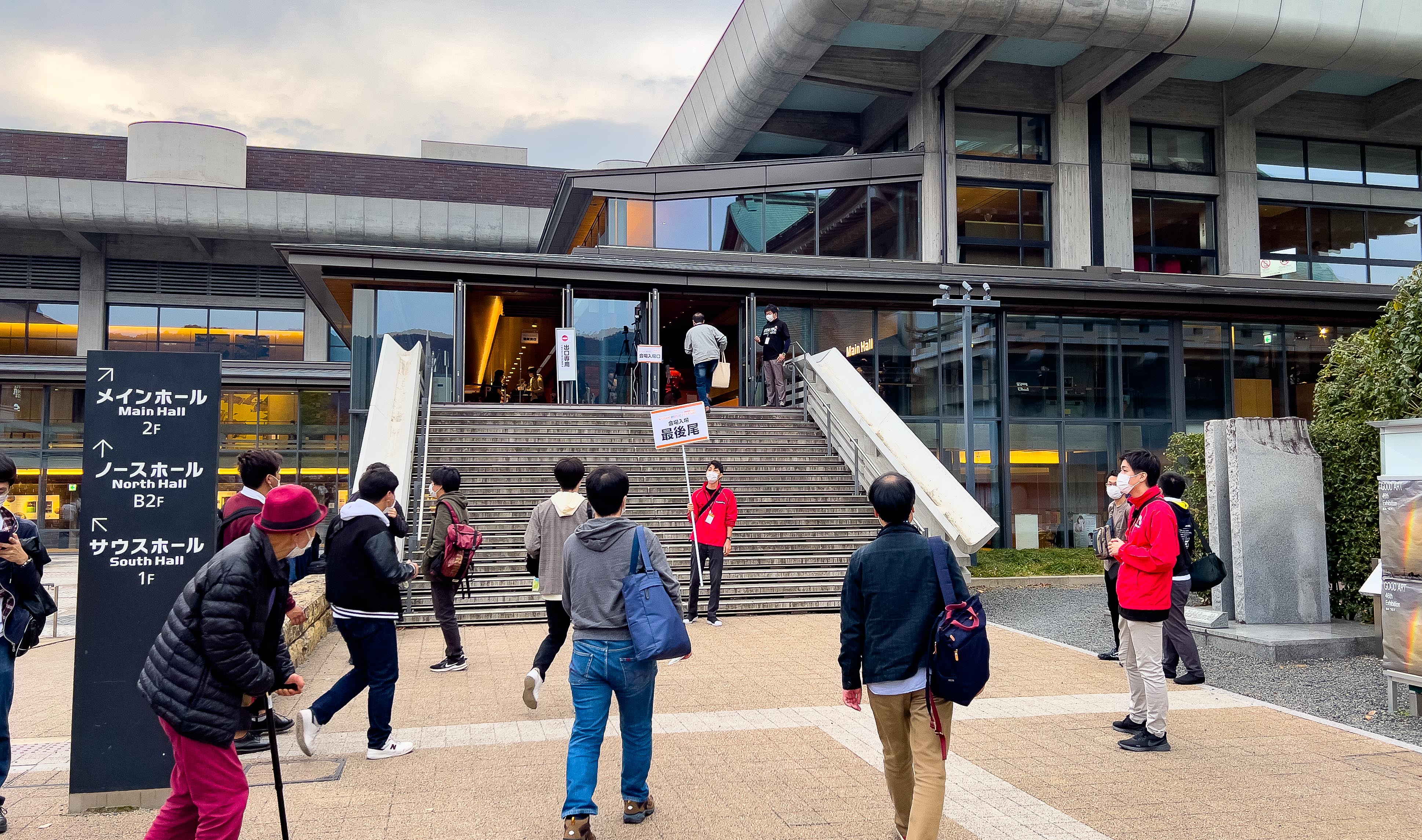 Since the unspeakable happened, the unimaginable did. A pandemic halted life as we knew it, delaying multiple productions that had already been postponed and pushing back events that may have occurred. Even through these series of challenges, instead of just focusing on its production, KyoAni decided to put on a two-day music festival to thank fans for sticking by them and to look to the future of the anime studio.

Though in this writer’s opinion, it is we who should be thanking them for continuing to create some of the best anime in the industry despite the challenges they have faced.

This was the first year since 2017 that the Kyoto Animation Thanks Event was held, and for the first time, instead of putting on an exhibition and stage events, KyoAni put on a music festival, highlighting music from their entire past catalog. I was lucky enough to get tickets for the event’s second day — which was only held through a lottery and was limited in number. The day teased music from Love, Chunibyo & Other Delusions, Violet Evergarden, and Miss Kobayashi’s Dragon Maid, but there was so much more than that.

Opening from the first day of the music festival

As the lights dimmed, a message from Kyoto Animation lit up the hall, thanking fans for their continuing support of the studio in its 40th anniversary and that through the staff’s “unwavering efforts and passionate beliefs,” they are working together to create animation, “connecting the batons of ambition.”

After the brief message that was hard to read through the tears that were already pouring down my face and soaking through my mask, the first set was from Munto — Kyoto Animation’s first original work by the late Yoshiji Kigami. Mai Aizawa, the voice of Yumemi, sang the opening theme, making for a sweet, yet subdued opening song. Munto, while being one of Kyoto Animation’s least-known works, must be close to the studio's heart as its first original work, especially after the loss of its creator Kigami in the arson attack.

Aizawa was joined by a surprise guest, the voice of Munto himself Daisuke Ono, via the massive screen behind her. They performed a skit from the show and then the opening animation for the concert began.

The show had barely begun and clapping in time with the music in the opening had already made my hands scream out in pain, but as ZAQ came out singing the opening theme from Love, Chunibyo & Other Delusions, my hands were numb and spinning in time with Rikka’s as my feet and butt couldn’t keep still while sitting in my seat. Love, Chunibyo & Other Delusions was able to break me out of the sorrow. I  thought about how far KyoAni had come and got my blood pumping for all the great music that was about to come.

Joining ZAQ after her set of all the Love, Chunibyo & Other Delusions openings was Black Raison d’être, the female voice actors from the anime, who performed the energizing ending songs on stage. ZAQ stepped in to sing Kumin’s parts. My wife and I bonded over our enjoyment of Love, Chunibyo & Other Delusions early on in our relationship as the first season had aired just before we meet, so sitting next to her while the set played on stage was a nice moment for us. 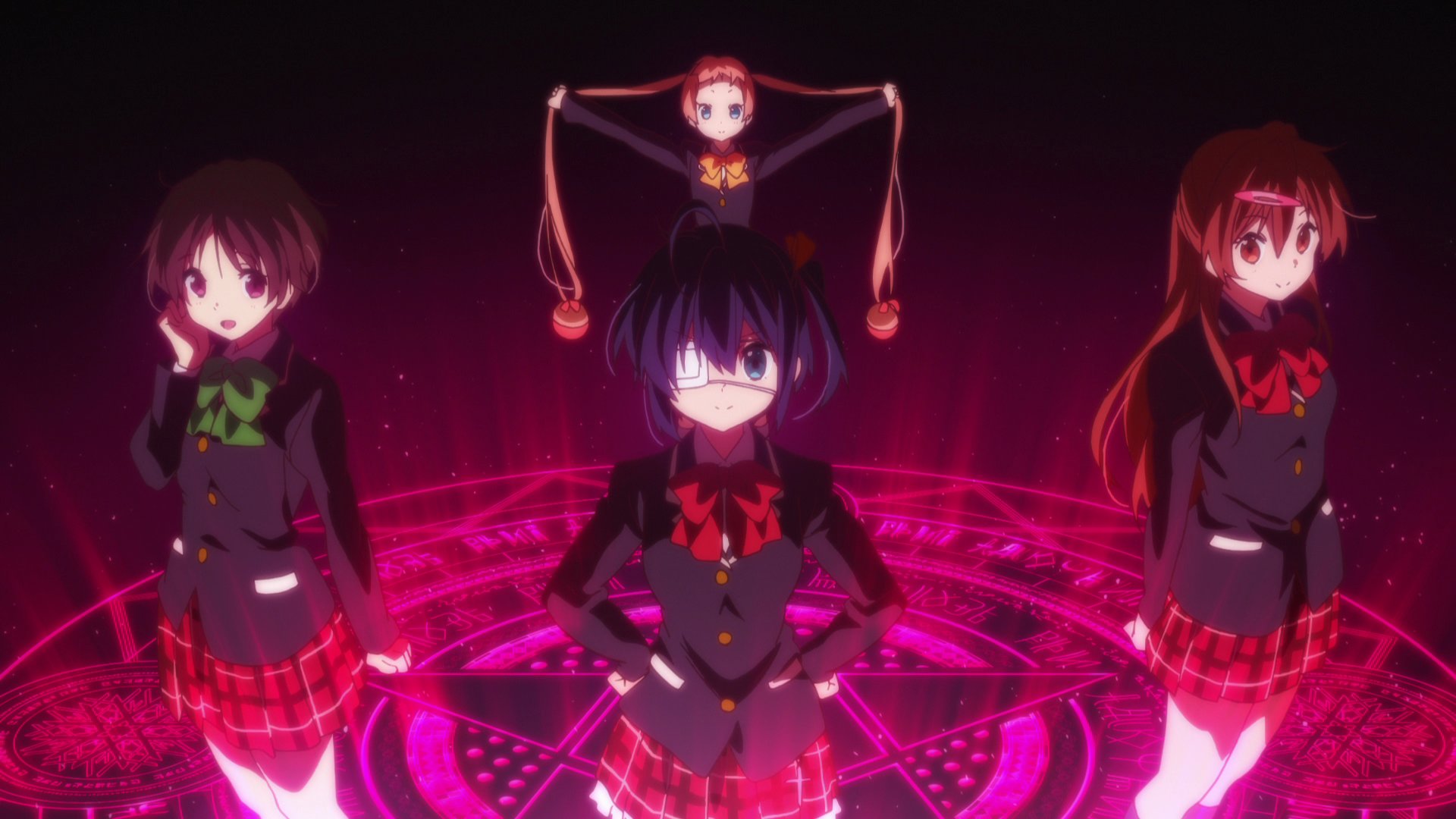 Up next was the first set from Minori Chihara, who was by far the most prolific performer throughout the event. Chihara performed the themes from the TV anime Beyond the Boundary, as well as its films. But it was after that performance where we, the audience, got our first surprise of the night: the team-up songs. While it should have been expected with ZAQ performing with Black Raison d’être, we couldn’t have imagined Chihara teaming up with ZAQ and towana from fhàna (in her first appearance of the night) to sing the idol insert song “Yakusoku no Kizuna” from Episode 6 of Beyond the Boundary.

And this wasn’t even the biggest surprise of the event. I’ll get to that.

Letting towana have a minor break was the Super Chorogons, the voice actors of the series, performing the ending theme to both the recently finished Miss Kobayashi’s Dragon Maid S and its first season — complete with cosplay of their characters! Yes, Kanna’s voice actor is as cute as the character she plays, though I did find it funny that she’s the second tallest after Lucoa.

Then it was fhàna’s turn to rip up the stage with their energy. They were by far the best performance of the night. The pure enthusiasm they had was captivating and the way they stirred up the crowd was electric. 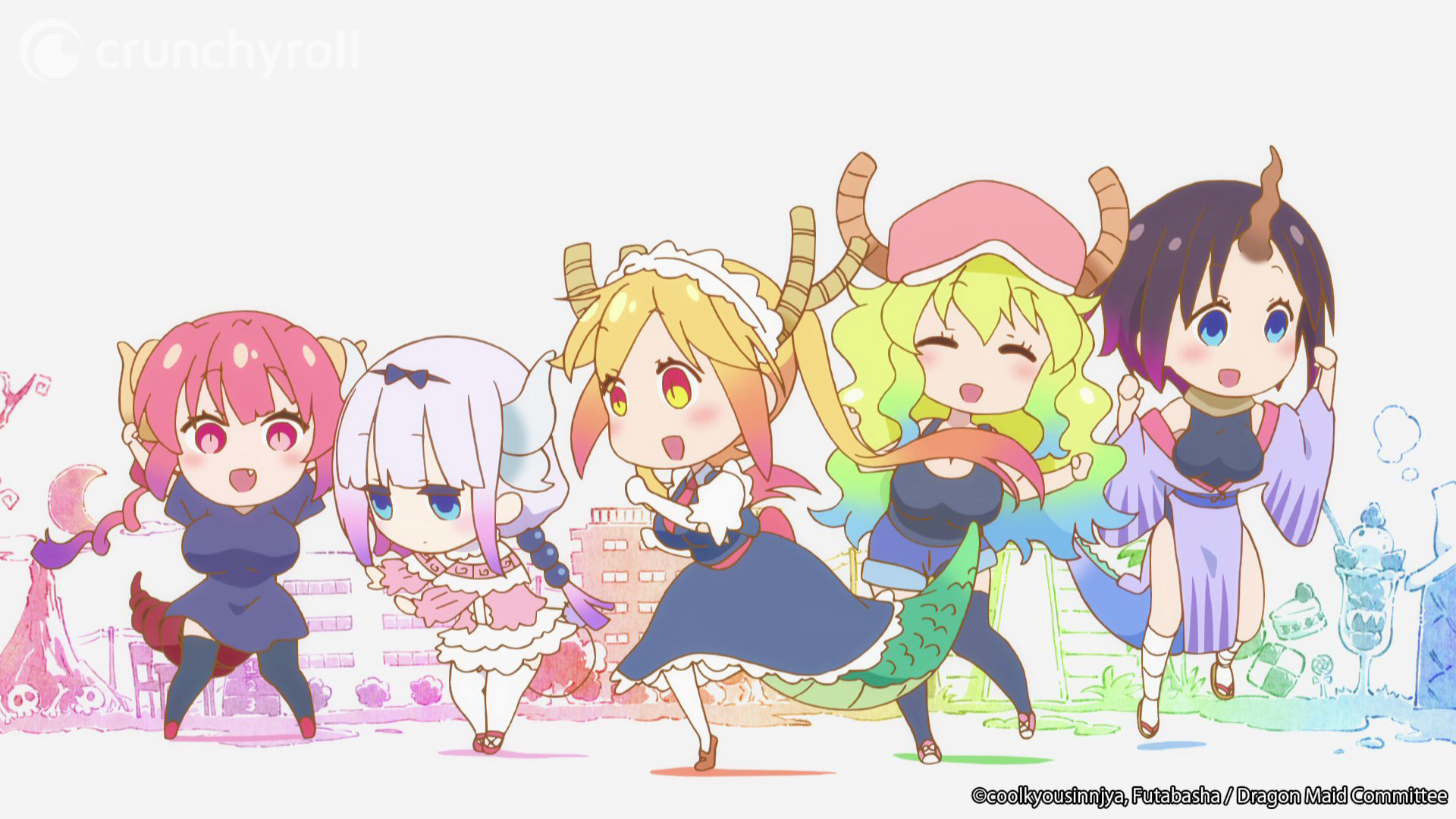 Then came the biggest surprises of the entire event: the Haruhi Suzumiya and Lucky Star “special stages.”

The “special stages” for the second day were the theme from The Disappearance of Haruhi Suzumiya, the famous “Hare Hare Yukei,” and the Super Chorogons in cheerleading outfits poorly dancing to the Lucky Star opening theme. While I could imagine that the first day’s “special stage” guitar riff into “Don’t Say Lazy” would have been magical to witness, the screams I heard (and frankly, also made), were out of this world when the words “The Disappearance of Haruhi Suzumiya” came on the screen behind Minori Chihara. Haruhi is dear to me and being able to hear Chihara talk about her love of KyoAni and how much the studio means to her ever since she got cast in the series as Yuki Nagato brought more tears to my eyes. As did her singing the theme from the movie, which was directed by the late Yashiro Takemoto, another lost in the Kyoto Animation arson attack.

Then came a moment I will never forget in my lifetime: Chihara casually mentioning that there is another song she performed in the franchise and having ZAQ and TRUE (in her first appearance of the night!) join her in the “Hare Hare Yukai”, which got the crowd even more riled up — understandably so. If you listen to the on-demand version of the event, you may hear me quote Joseph Joestar’s “Oh my god!” 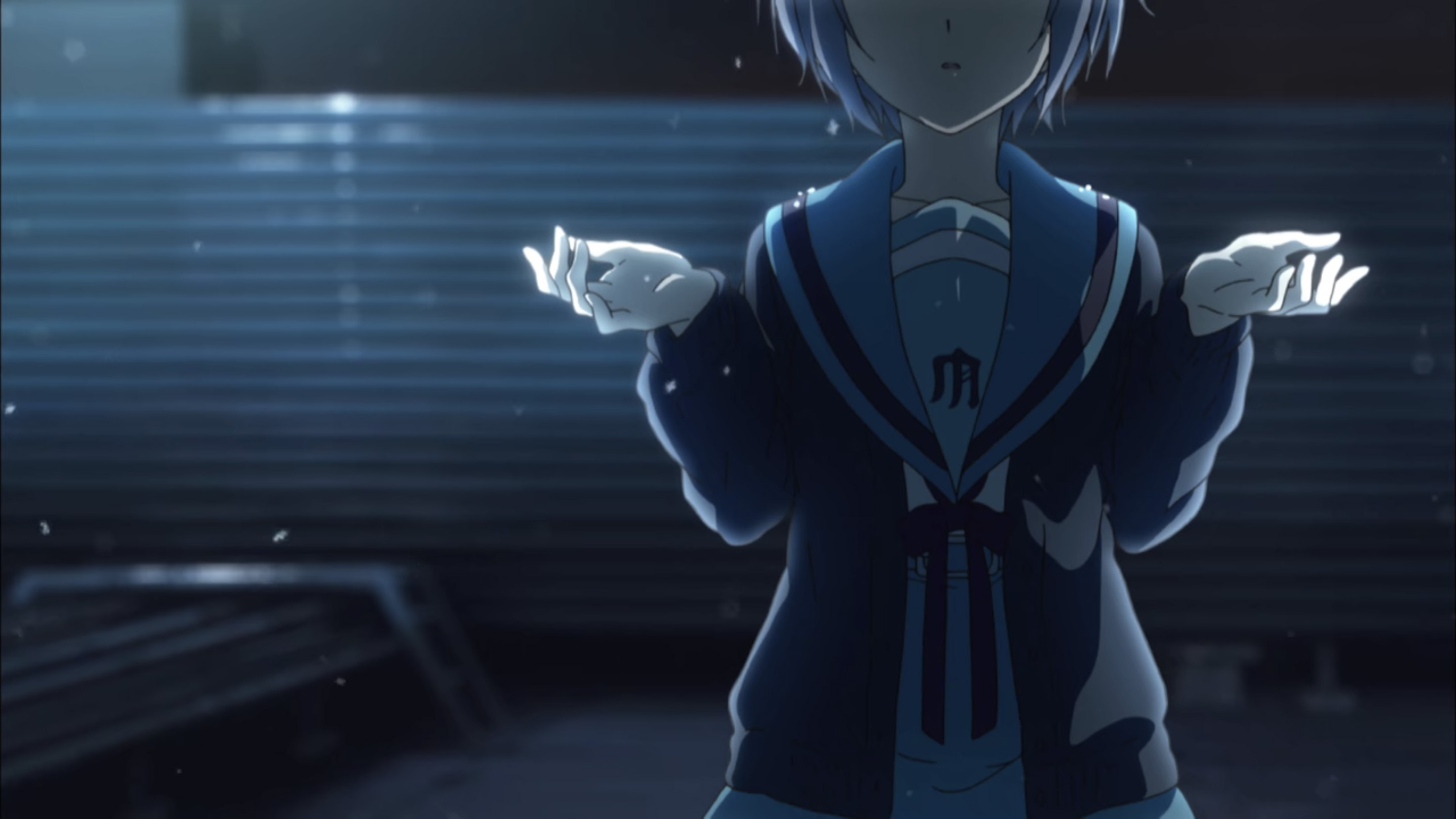 While we were told earlier that seating would be spaced due to COVID-19, that didn’t happen — and I’m okay with that because the guy next to me was otagei’ing it up all throughout the first half, which just encouraged me to dance along. There was supposed to be a no-standing, no-dancing, policy but when “Hare Hare Yukai” starts playing, there's no stopping the crowd. Though to be fair, we were seated and dancing. The website even said the use of penlights was prohibited during the event, yet KyoAni sold them before the show and they were used extensively, to wonderful effect.

Having both Haruhi Suzumiya and Lucky Star back-to-back was just too much for my heart to handle.

The Second Half Of The Kyoto Animation Music Festival 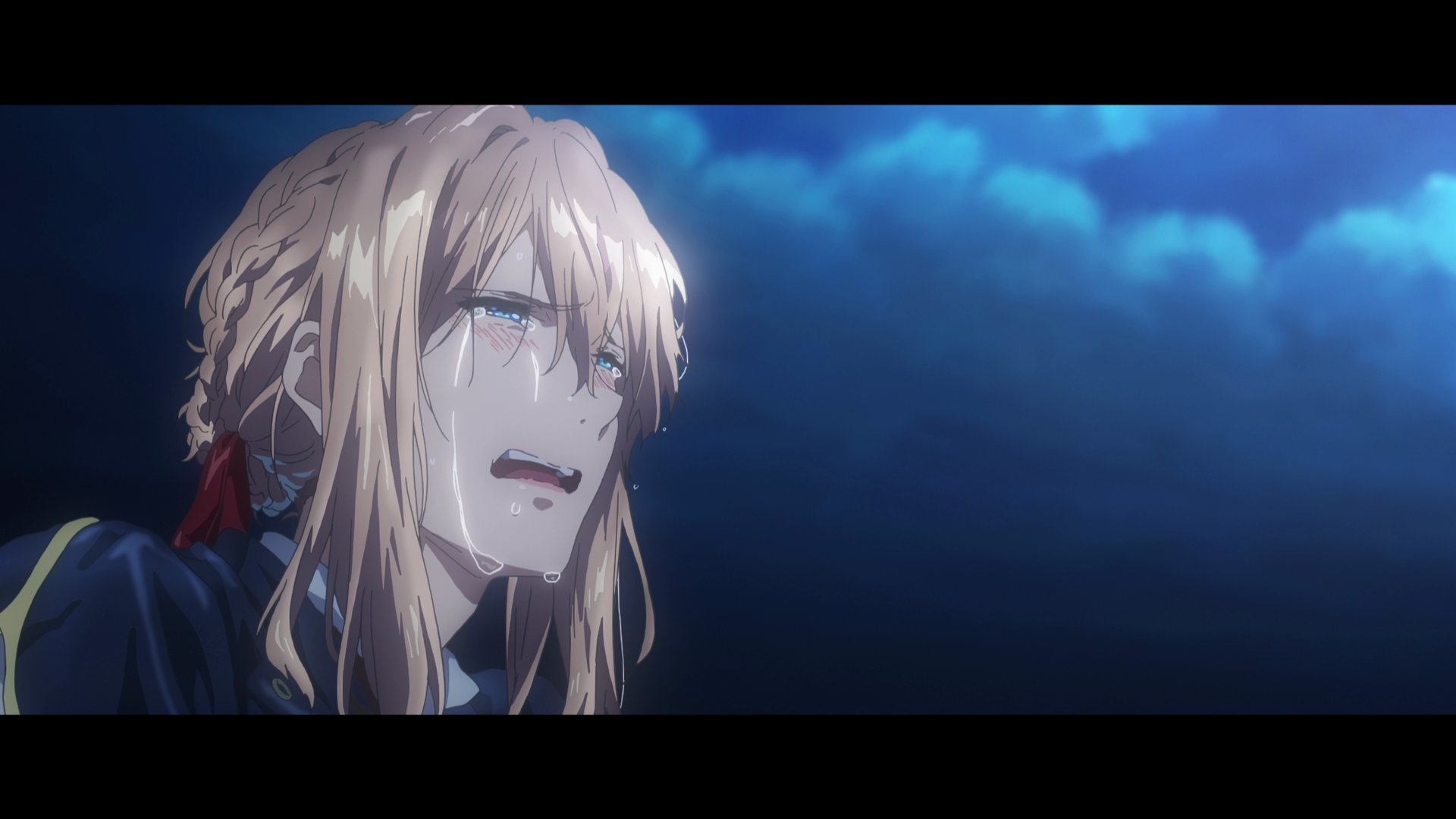 The whole second half was dedicated to Violet Evergarden, Kyoto Animation’s biggest franchise ever. The set started with an orchestral melody introduced by Evan Call, which was a nice change of pace from the sheer amount of hype that was the first half. The calming melancholic music of Violet Evergaden made me reminisce on the franchise, as well as how far Kyoto Animation has come since Munto in 2003 and Lucky Star in 2007 in terms of sheer animation quality.

Each set had scenes from the show on a giant screen behind them, with the opening and endings using the animation for their in-anime sections, then other scenes for the extended mix of the songs. So with Violet Evergarden, its award-winning animation was blissfully displayed behind the orchestra while its magical tunes were performed.

We were then treated to the lovely voices of Minori Chihara and TRUE performing all the theme songs from the Violet Evergarden anime series and two films. There’s not much I can say about the music from Violet Evergarden other than it’s all lovely and wonderful to listen to. They may not be as heart-pumping as the J-Pop tunes of Miss Kobayashi’s Dragon Maid or Love, Chunibyo & Other Delusions, but they move your heart in other ways, making you emotional with every lyric and wistful sonnet. Yuuki Aira’s film rendition of “Violet Snow” never fails to melt my heart. 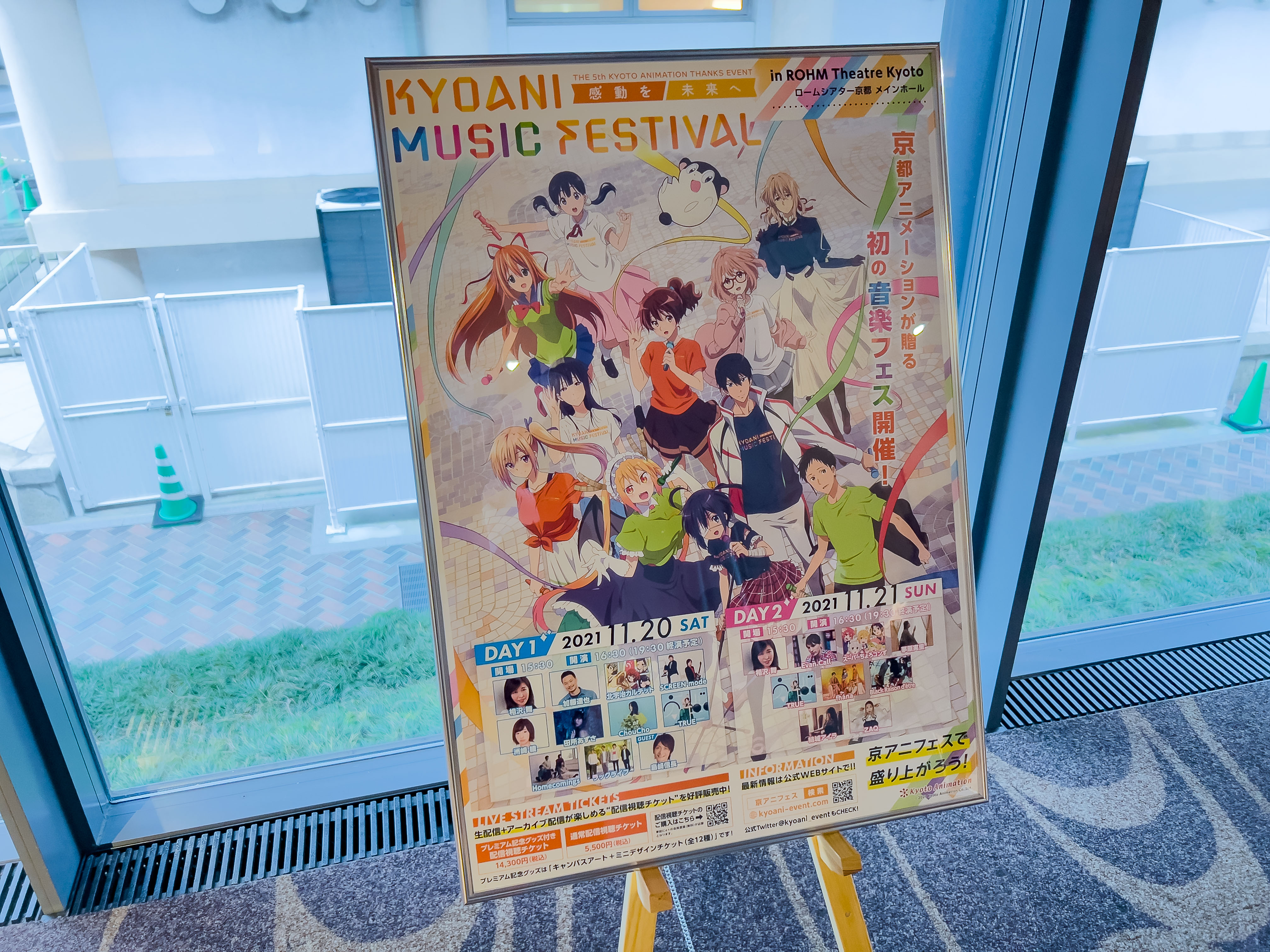 The event ended with another creation by the late Yoshiji Kigami, the mascot of Kyoani, Baja! All the performers (and Evan Call!) sang the theme song from the cute character’s shorts, making for a fun ending to the tearful but once-in-a-lifetime event.

Despite the event’s tagline of “inspiration for the future,” I couldn’t help shake the feeling that the music festival — as well as all the stories from the performers who spoke about their love for Kyoto Animation and their history with the studio — was looking at the past, capping off a chapter of the anime studio that has come to pass. Instead of being inspired to look forward, the studio looked back at where they have been. But maybe that was the plan, to finish looking back so they can look forward to what comes next.

While the event was held as a thanks from KyoAni to their fans, I’ll say it again, and I must stress this, it is us, the fans, that are thankful to them for what they have created and how they’ve been able to touch our hearts through not just their wonderful animation, but the music and the community that they have rallied around the studio.