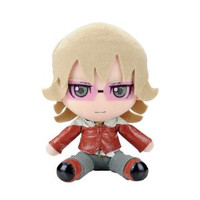 ALTER already unveiled their Kotetsu T. Kaburagi plushy, which goes on sale this January, but now they've announced Barnaby Brooks Jr. for April. Look how cute he is:

His legs have some moving parts so he can pose a bit. He comes with a magnetic stuffed bunny and sash:

In case you missed Kotetsu:

He can also pose a bit, and his hat is removable. Extras include his mask and a sash that matches Barnaby's:

Each one costs 3,360 yen (about US $43.23). It's too bad they don't go on sale at the same time, but just remember that Kotetsu is older, so he's out in January! Barnaby follows in April.