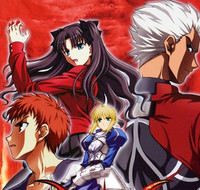 Based on the Type-Moon visual novel, Fate/stay night originally aired in 2006, and was directed by Yuji Yamaguchi (Angel Links, Strawberry Eggs). FUNimation previously released the series on DVD in 2009.

Sentai also announced details for more January releases at the panel. Mardock Scramble: The Second Combustion will hit Blu-ray and DVD, including both the theatrical and director's cut edition; Bodacious Space Pirates lands on Blu-ray and DVD with an English dub included; the Saiyuki Gaiden DVD will feature an English dub with the original ADV Films cast; and January will also see the second half of Persona 4 The Animation on Blu-ray and DVD sans the original Japanese audio.

Anyone plan on picking up Sentai's upcoming release of Fate/stay night or any of the other titles they have slated for January?