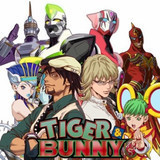 12 episodes of the super hero action drama will be packaged with additional scenes, production sketches and storyboards for $44.82 DVD or $54.97 Blu-ray. Japanese and English audio will be on the discs.

WHV has not previewed the cover art.