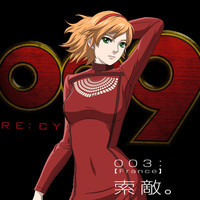 The UK occasionally gets anime before North America (Redline) or anime that is never released in North America (Mamoru Oshii's anime documentary Musashi: The Dream of the Last Samurai). And, it seems like one of these will be the case for Ghost in the Shell: Stand Alone Complex director kenji Kamiyama's sci-fi revival 009: Re Cyborg.

Anime Limited announced that it has acquired the video, digital and theatrical rights in the UK and Republic of Ireland. Limited theatrical release across the UK will begin in Spring 2013 – making it the one of the first places outside of Asia you will be able to see the film on theatrical release. The movie will be screened in Japanese with English subtitles in both 2D and 3D.

From the director of Ghost in the Shell: Stand Alone Complex. Music by Kenji Kawai (Apocalypse, Avalon, Ghost in the Shell, The Sky Crawlers). Sound design by Tom Myers at Skywalker Sound (WALL-E, Toy Story 3).  The animation in 009 Re:Cyborg is fully computer-generated (like the Pixar movies) but treated with cel-shader, a program that allows to keep the look of traditional Japanese 2D animation. For this reason, it is called “cel-looking CG animation.”

Exact run dates, cities and screenings will be confirmed very shortly and we can confirm the film will be screened in Japanese with English subtitles in both 2D and 3D.

Once there were nine cybernetic heroes who had long fought for justice. But as their struggle finally restored peace, they eventually disappeared from the pages of history and from people’s memory. 2013: skyscrapers across the world are hit by suicide bombers with no apparent connection. The nine heroes gather once again after three decades to fight against this faceless menace. They appear untouched by time, but society around them has changed dramatically, as it has the very idea of “justice” they used to believe in… What is their role in the world now?

Ishinomori (1938 – 1998) is considered one of the most representative and influential Japanese comic artists. His opera omnia, encompassing an astoundingly broad variety of themes, includes 770 works collected into 500 volumes for a total of 128,000 pages, making him the Guinnes World Record-holder for the “most comics published by one author”. He received the Order of the Rising Sun, Gold Rays with Rosette, the Japan Cartoonists Association Award and the Minister of Education Award for his work. He also received the special Osamu Tezuka Cultural Prize for his long lasting contributions to the manga medium.