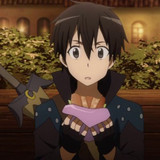 Get ready to hear Kirito and Asuna speaking English! Aniplex has posted a preview of the English version of Sword Art Online ahead of the series' planned US run.

Bryce Papenbrook, who played leads in Aniplex's Durarara! and Blue Exorcist, is Kirito, while Cherami Leigh, who you might know as Fairy Tail's Lucy, plays Asuna.