To be released in late January 2014 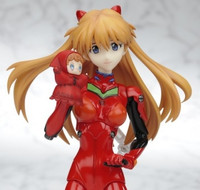 Figure and doll company Arcadia will soon be releasing a poseable figure of “Rebuild of Evangelion” character Asuka Langley Shikinami.

The figure can be posed in a number of ways.

Asuka can be made to display a wide range of emotions.