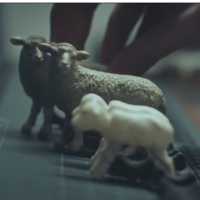 Vocaloid producer (best known for Hatsune Miku and Gumi's "Matryoshka"), songwriter, and illustrator Kenshi Yonezu (aka Hachi) has done some interesting animation to accompany non-vocaloid work, such as the videos for last year's "diorama" album. He has a new single due out October 30th, and he's gone live action for the accompanying videos. The second is now online.

Tracks on the single include