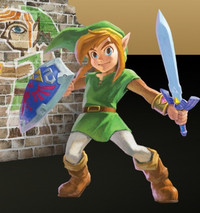 Nintendo is celebrating its history of linking The Legend of Zelda series with gold in a video starring producer Eiji Aonuma. His introduction of the gold and black A Link Between Worlds 3DS XL bundle confirms its arrival in North America on the same day as the game's release.

The bundle packs the special handheld with a download code for The Legend of Zelda: A Link Between Worlds for $219.99 on November 22.