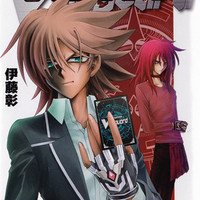 Vertical has announced that Cardfight!! Vanguard by Akira Itou will launch in April of 2014. The North American publisher will be releasing each volume of the multi-media franchise's manga with a trading card, and also plan on releasing a special edition of volume 1 with starter deck.

« Previous Post
Syfy Reality Competition "Face Off" Travels to Japan for Anime Challenge
Next Post »
"Isshûkan Friends" Slated To Be Adapted Into Anime
Other Top News
8 Comments
Sort by: