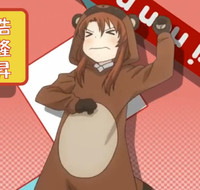 In a cute, and very popular (over 100,000 views is a week on Nico), new MAD by "Del Sol," the cast of Non Non Biyori is edited into the opening for Working!!